Here's the first of my reports from the Element Games Grand Slam 2018 40k event that I attended with regular opponent John recently. I took this list. In case you don't want to follow the link, I took a mixed Imperium force with an Adeptus Mechanicus battalion and an Imperial Knight super heavy detachment.

My opponent for the first game was Jonathan, who had brought a mixed chaos force of Heretic Astartes, Thousand Sons and Daemons with lots of bodies. Off the top of my head, it was something like this:

I definitely thought his list was more optimised than mine, and I've not really had much experience against this kind of army, so I wasn't expecting it to go well. Regardless, I didn't think it was a complete forgone conclusion. The missions running simultaneously were Scouring and Tactical Gambit. 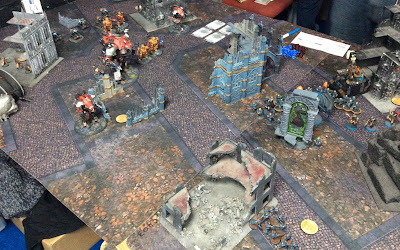 Unsurprisingly I finished deployment first and ended up going first. I used my troops to screen out the back of my deployment zone from deep strikers, aware that Jonathan had placed several units in reserve and had the Dark Matter Crystal available to jump the Tzaangors into my lines. Line of sight was severely restricted and the chaos forces made good use of the cover available to force my shooting to target mostly cultists. The Armigers drew a bead on the Rhino full of 'zerkers but failed to destroy it, and the Valiant and robots killed some cultists.

In response, the Chaos forces moved up cautiously, keeping the reserves off the board and staying out of line of sight where possible. Then the crystal activated and the Tzaangors materialised 9 inches from one of the Armigers. A command re-roll was used to get them into combat, and the successfully tied down the Warglaive and the Rangers hiding in the ruin behind it. 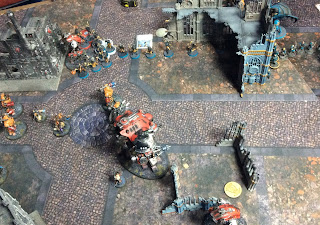 In turn 2, I made my biggest mistake. I decided the Tzaangors had to be dealt with, and threw the punchy robots and my characters in to fight them. I also moved my shooty robots to get line of sight on the Rhino, which brought them close enough to be consolidated into. Very foolish of me! In hindsight, thanks to buffs from psychic powers and fearlessness from Abaddon, the Tzaangors were never going anywhere with the few attacks I could throw at them. I definitely should have moved everything that could the opposite direction, as far away from them as possible! Elsewhere the Valiant set fire to some cultists, but I assumed (correctly) that they would return shortly with Tide of Traitors. It also launched a missile at the Black Legion Sorcerer with Oathbreaker Guidance System, but apparently the missile hit a wall instead as the Sorcerer rolled a 6 for his save in cover. 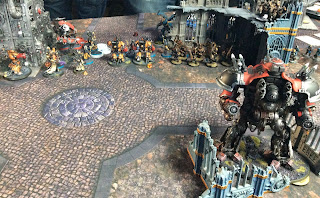 Jonathan's turn 2 and the trap is sprung! Obliterators popped down to target the Valiant, the cultists faded away and turned up in the far corner of my deployment zone, the Berserkers got out and headed to all my units locked up in combat, and a series of sorcerers lined up to Smite the Valiant. Thanks to some stratagem use and some mediocre rolls, the Valiant came off lightly, but the 'zerkers hit like a truck and removed the fist robots, one of which exploded with Machine Spirit's Revenge. The Cultists failed their charge in to the Kataphron Destroyers, but they were ideally positioned to chase them down for the rest of the game, and with the dakka bots all tied up, I didn't really have anything to stop them. 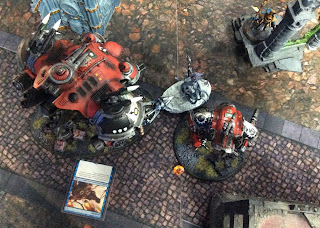 My turn 3, and the Maelstrom cards looked interesting. Witch Hunter and Blood and Guts were in my hand, plus a possibly achievable objective, so I gambled for 3 points, with the Slaanesh Herald in sight of the Valiant. It lined up to blast the Obliterators, but that cheeky herald pulled out a relic gem that caused it to be unable to shoot! These Chaos guys have got some sweet loot! I opted to blast the Oblits with supercharged, Plasma Specialist Destroyers, but rolled poorly to only kill a single model, even doing 3 damage with each wound! The free Armiger tried to snipe the Terminator Sorcerer with it's thermal spear, but failed. Finally both Knights charged the Herald, and whiffed. To add insult to injury, the Herald killed the already injured Armiger and consolidation from the big Tzaangor fight claimed the objective I was trying to secure. This put me firmly on the back foot! 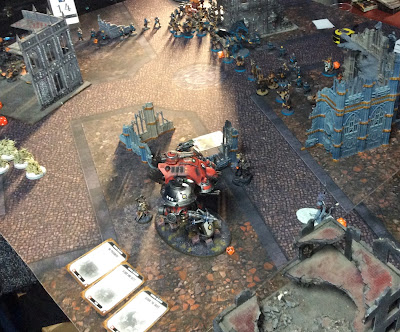 The rest of the game was mostly the story of Jonathan's forces wrapping up most of my army and slowly grinding it down. The Valiant stood firm against a charge from Abaddon and friends, who then ran away from it, in case it exploded, after his sword rebelled a couple of times. It eventually fell, I think after I finally stomped on that Herald, but by that point I was far, far behind on points. I managed to end turn 5 as time ran out with some models remaining on the board, but with the scored added up, a convincing victory for Chaos, and 20 tournament points to Jonathan, 0 to me.

It was a tough match, and I really needed my dice and my brain to give me some help. Sadly neither really stepped up, and I didn't manage to put up much of a fight. It was somewhat comforting to learn John had also lost badly, his Emperor's Children/Renegade Knights being tabled by an Aeldari list with four flyers.

Not a great start, but with 4 games left to play, my lofty goal of 'somewhere in the middle' was still achievable.
Posted by Redtoof at 17:40