Hello!
Here's what turned out to be my last game in the Grim Dice Crusade League, where 100 power level of Ryza Ad Mech, ably assisted by Lady Helena of House Taranis in the Knight Valiant 'The Defiant Flame' took on Ben and his Genestealer Cult. The battlefield was on a world or red sands and partially buried technology, so Helena presumably felt right at home as the Helios Explorator Fleet aimed to purge the xenos taint from this holy place - obviously this was what this Crusade was leading up to!
The mission was Tech Recovery from the Plague Purge mission pack, a mission in which there are six 'covered' objectives, of which two are fake blips and four are valuable technology. Points are available for uncovering the objectives with an action and holding the tech once it has been found. 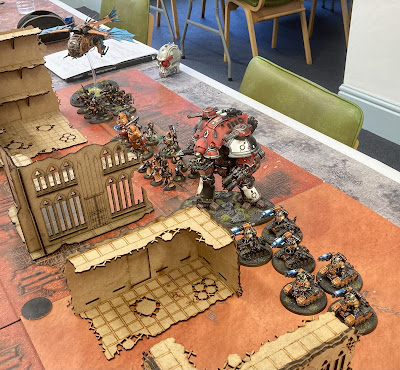 My force now consisted of units of Kataphron Breachers and Destroyers, Skitarii Rangers, Vanguard (10 of them), Rust Stalkers, Sulphurhounds (6 of them), two units of Sterylizors, Kastelan Robots and an Archaeopter Fusilave. They were led by a Dominus, Manipulus and a Cybernetica Datasmith, and as mentioned, accompanied by the Knight Valiant.
The Genestealer Cult forces were led by a Patriarch and pretty much one each of the other characters, and had a selection of Acolyte and Neophyte units, a mob of Aberrants, a full brood of Purestrain Genestealers, two units of Atalan bikers, a trio of Ridge Runners, a truck and a Rockgrinder. Their cult creed meant they could reroll charges and had a bonus for using mining weapons. That Rockgrinder was important, because I took the Tech Scavengers agenda so I'd have to kill it and then loot the wreckage for archeotech. 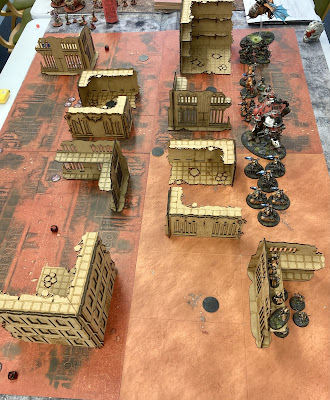 Deployment against GSC - the auspexes were pinging away with all sorts of crazy blips out there! I got first turn so the AdMech forces moved up to uncover some objectives. 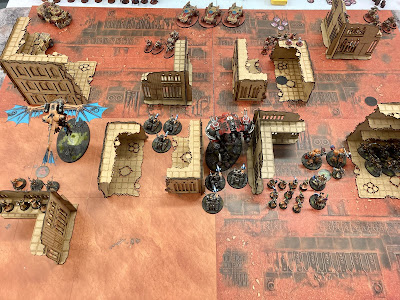 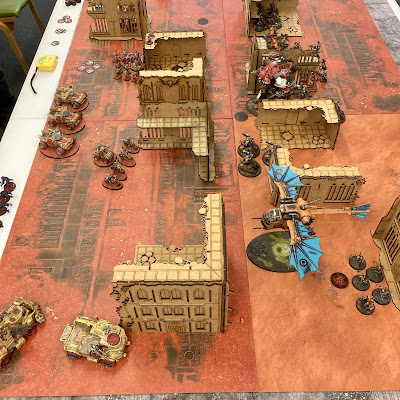 Movement and Genestealer Cult Deployment done! Thanks to the terrain I didn't have that many shooting options - the Valiant was largely out of range, but the Destroyers backing it up could get at the Ridge Runners. 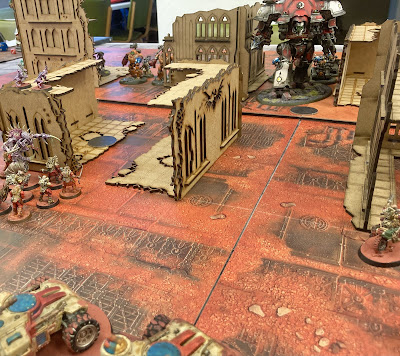 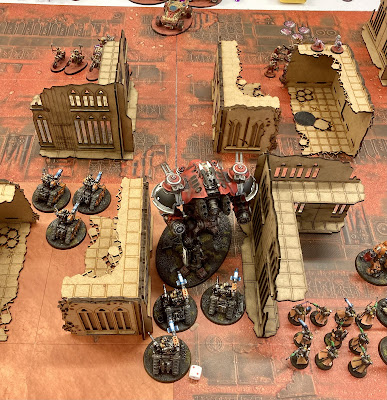 With uncharacteristic effectiveness, they killed off two in one volley! A good start that probably meant the Valiant would remain unmolested for the game. 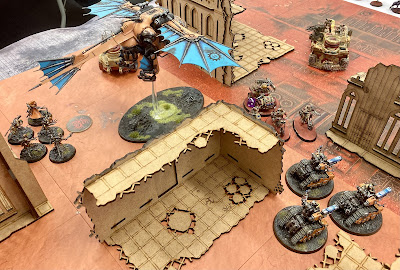 Genestealer turn one, they largely ignored the objectives, uncovering one to my two. Instead they instigated an assault on the oppressors, swinging round on the flank to light up my Rust Stalkers with a truck full of hand flamers, and chip away at my Breachers with the bikes. 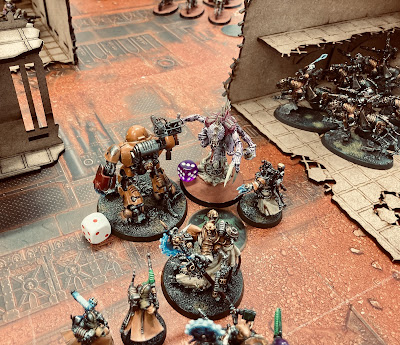 On the other flank the mining lasers took down one of the Robots, while the Patriarch made a bold charge in, reducing the other down to a single wound. However his quickness at dodging the power fists meant he survived the return attacks. 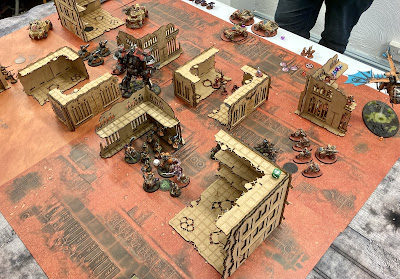 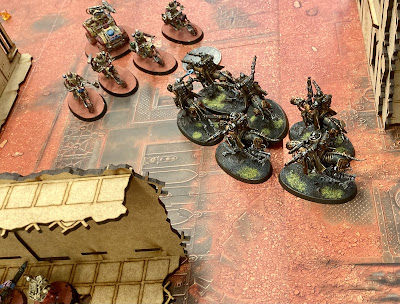 Admech turn two, time for some purging! Waiting for the opposition reserves, the Pteraxii stayed in the skies, but the Serberys Sulphurhounds sallied forth to engage the bikers on an objective. The Fusilave flew over and between it's bombs and stubbers nuked a bunch of cultists, with the Sulphurhounds mostly finishing the job - their particular brand of high volume fire coming in handy. Elsewhere shooting chipped wounds off the trucks and the Valiant finished the last Ridge Runner, while the Breachers killed off the last of the bikers on the left flank in melee. However the Patriarch managed to survive another round of combat, splitting his own attacks and reducing both the repaired robot and the Datasmith to one wound! 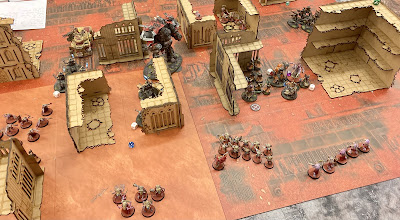 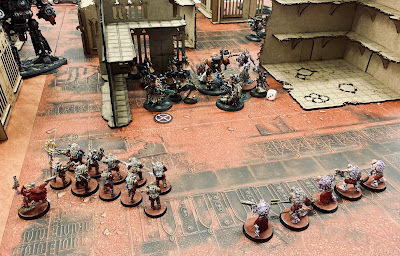 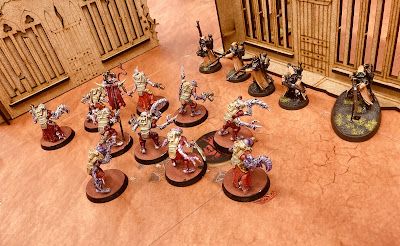 Time for the jaws of the trap to close on my poor Ad Mech! GSC turn two saw most of the reserves coming in behind, while the flamer unit dropped out of the truck to claim an objective and incinerate some Rangers in the process. Shots rang out from all around, and then the charges came in - the Aberrants making it into the Dominus, Eldane Katronosa, and dropping them, piling in to the remaining Vanguard. The Patriarch finally did the deed and killed off the Robot. 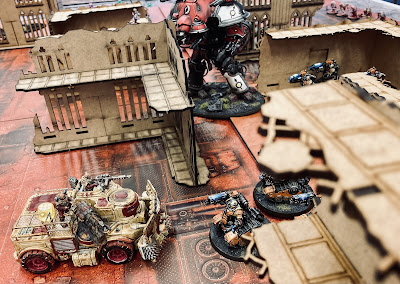 Elsewhere the damaged Rockgrinder, holding that vital archeotech, charged the Breachers. I interrupted to try and finish it off, but reduced it to a single wound, in exchange for two of the Kataphrons over the turn.
It was a hard counter punch, but those cultists are just flesh and blood, unlike us... 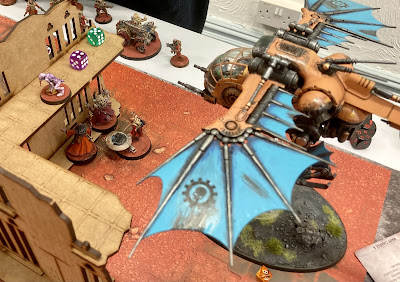 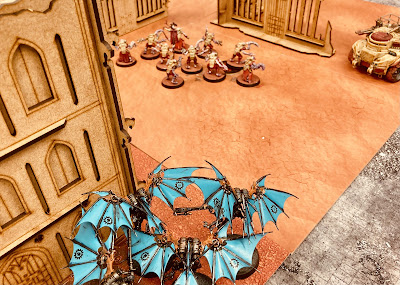 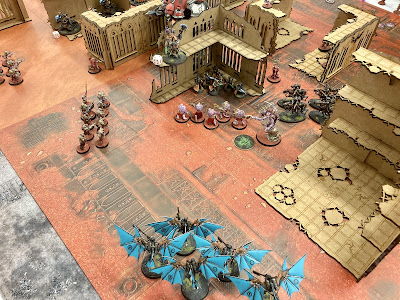 Flappy boy time! The Pteraxii descended from the skies to incinerate a chunk of the cultists, while the Fusilave went into hover mode and started gunning down characters, starting with the Nexus. 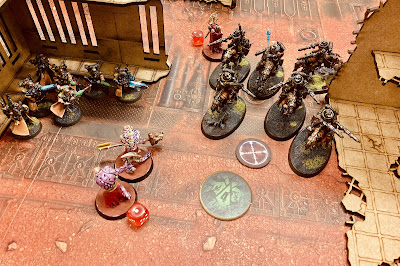 Then the cavalry unloaded, before charging in behind a wall of flame! They took out the Patriarch, though their shooting didn't finish off the Aberrants. This move at least denied the objective to the GSC at least. 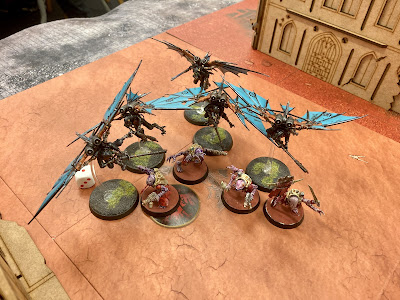 On the other flank the Pteraxii made it into melee to kill off the remaining Cultists, though not before they interrupted and cut down a couple. Elsewhere amusingly the Destroyers made a charge and finished off a depleted Acolyte unit. 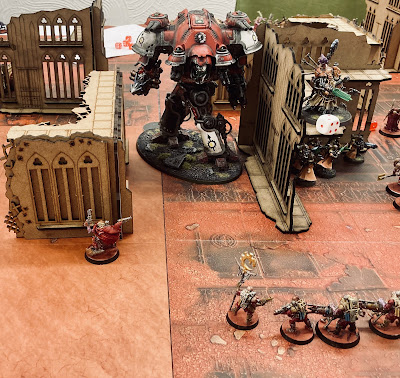 A decent counter-counter attack! However with both sides only picking up a single objective here and there, the score was still pretty close, with me in the lead after having uncovered two in turn one. 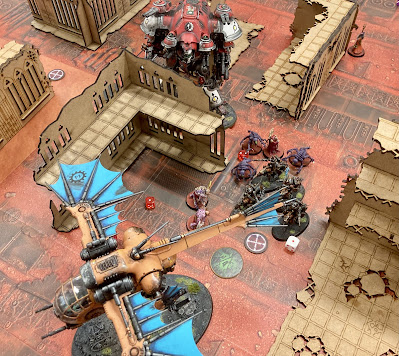 GSC turn three saw the Purestrains arrive and charge into the Sulphurhounds, but thanks to their rad-saturation reducing their strength (and some abysmal dice), 50 attacks translated into a single wound. The Aberrants did finish the Vanguard though to contest that objective, while the Kellermorph killed off a unit of Steryizors.
In my turn four the bomber flew over and killed off some Genestealers, while the Sulphur-breath burned a chunk more. I also had my last Pteraxii leave combat with the Truck to charge the damaged Rockgrinder, losing two more to it's attacks, the lone Alpha finally killed it! 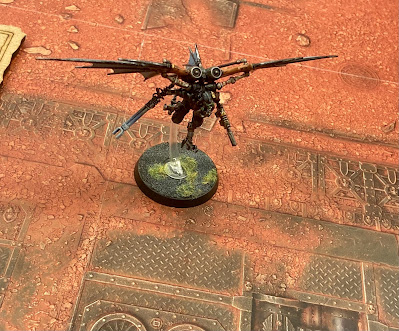 This meant he was left standing over the Archeotech marker - which I thought I'd be able to grab in turn five, but re-reading the agenda I discovered the action finished in my next command phase! So once again denied some Archeotech by game length! 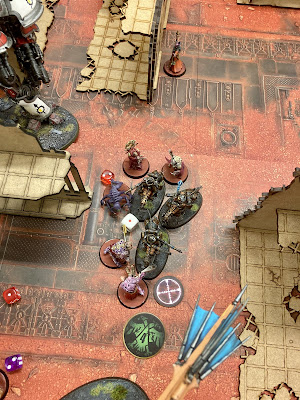 In the last couple of turns the remaining GSC units brawled with my Sulphurhounds, eventually killing them and having enough time to go flip one last objective. This left the final score close, but a win to the AdMech, 26-23!
Awesome, bloodbath of a game. Great to finish the Crusade League off on a high of course, but I'm bitterly disappointed to have missed out on that sweet Archeotech loot! I did get a bunch of XP though, and thanks to winning I got a free weapon enhancement - which I used to buff a Kataphron Destroyer Plasma Culverin. The destroyers got the MFG XP as well since they were actually good this game, eventually finishing off the Goliath truck in melee to cap things off!
Since the league used 'artificial' escalation I've now spent some requisition to go up to 65 supply limit, and removed a couple of units that were putting me over. Sadly that means Lady Helena is out of the Crusade once again, though I would one day like to include her again!
Anyway, thanks for reading, hope you enjoyed, and stay safe!
Posted by Redtoof at 17:06 No comments: