As I may have mentioned previously, in a couple of weeks I will be attending the Element Games Grand Slam (or EGGS) 40k event, at, unsurprisingly, Element Games. I was seriously considering taking my Orks with a new Codex and a list similar to the one I wrote here, but I haven't really had a chance to get any games in with them yet, and I still haven't given the Valiant a go yet, so I've decided to go with an Adeptus Mechanicus and Imperial Knights alliance.

So here is the list I'll (probably) take with me. As with most of the lists I write, it's not really competitive, but it should have some 'teeth', as the TTT team would say. Even though it is a tournament, I will still stubbornly refuse to run anything other than Ryza and Taranis for my forces. With that in mind I've taken a few units that hopefully should take advantage of those traits and stratagems etc. I feel like the list is definitely lacking in bodies, but hopefully will make up for that by overloading the enemy with priority targets. I'll start with 11 command points, but I intend to spend one or two of them buffing the Valiant with a warlord trait and/or relic. I'd considered making it the warlord, but it will almost certainly die every game, and I like the option to pick a trait/relic that will help against the opponent. I'd like a few more command points, so hopefully I'll pick up a couple with Monitor Malevolus. 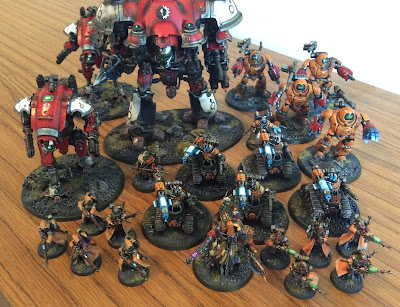 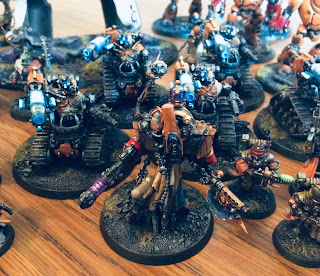 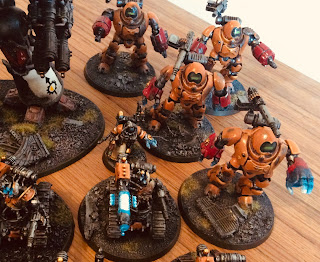 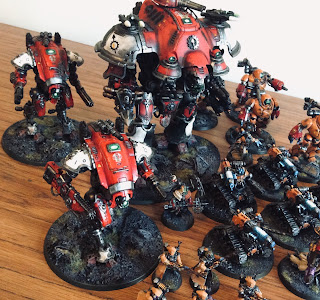 As I said, I don't think this is a top tier list, though maybe a bit stronger than one might take for a friendly or narrative game. I don't really have any expectations of winning anything significant, but I'm aiming to come somewhere in the middle of the pack and, more importantly, have fun. That's the plan anyway, and if the games are a bust, at least there is a bar!
Posted by Redtoof at 19:43