Hello!
There's a few different hashtags going on here - this is my New Year, New Army, and joining in the fun with the DZTV Hobbypocalypse, which involved painting 250 points a month of a new force for 6 months along with their Four Horsemen of the Hobbypocalypse series. As part of another project I'm working on, I got a big load of chaos marines in a trade, which included approximately 2000 points of Death Guard from the Conquest series. So I thought I'd have a bit of fun and paint up some really rusty, dirty, 'dry' Death Guard using my new best hobby friend, the sponge! 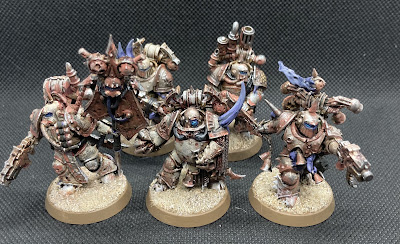 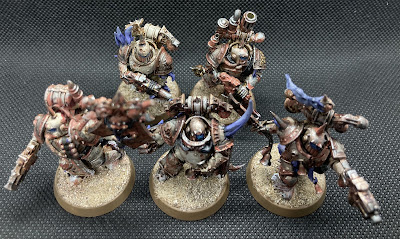 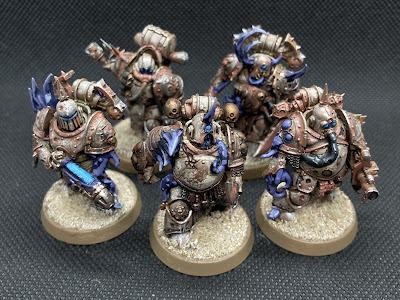 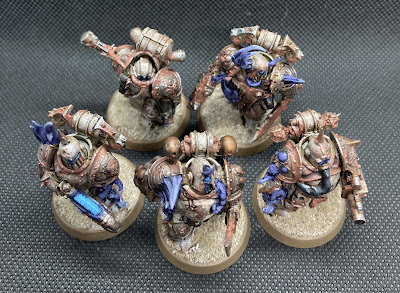 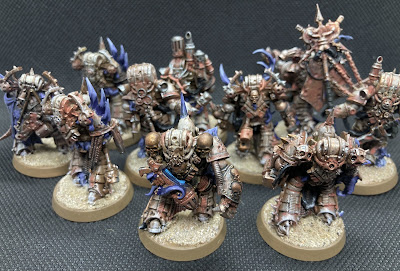 So here is about 260 points of Plague Marines, two squads of 5 with assorted upgrades. I'm really happy with how they turned out, the dusty looking armour, heavily chipped with The Sponge, covered with rust weathering powder, then contrasted with the purple mutations. I wasn't sure about the bases initially, with plans for churned up mud, but the DZTV discord people suggested some pale sand and I think it works (there's also some dry yellow static grass hiding on there!) 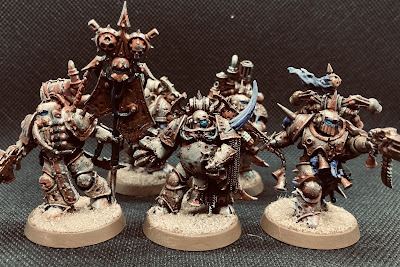 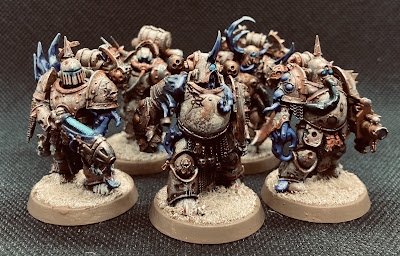 Just for a bit of fun, here they are with a warm filter on, looking super grubby. Again, really pleased with this worn down, dry look rather than the usual green and puss. I'm not sure if I'll ever actually play with these guys, it might just be a painting project, they might end up getting sold, or they might be the start of a big mixed nurgle force? We'll see. They certainly were fun and fairly quick to paint though, so I'm looking forward to painting up more of them, and their characters, daemon engines etc. 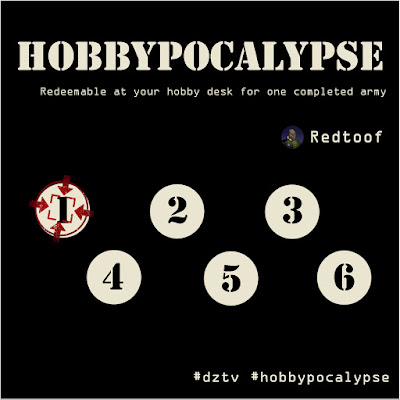 As mentioned, this was also tied in with the DZTV Hobbypocalypse, so here's my 'card' from the legendary Stylus. (Though my Ork heart says that I'm team Monkey!) And as we're now into 'month two' I've started working on my next chunk...

Sneak peak of what's to come, another five Plague Marines and a couple of characters. I think again it's a bit more than 250 but close enough to be in the spirit of things anyway.
Hope you enjoyed this, and I'd love to hear about what you are all doing for new armies and if you are playing along with the Hobbypocalypse. Stay safe!
Posted by Redtoof at 14:04 1 comment:

Hello!
In a continuation from an earlier project, I've been painting more Drukhari (and have been searching google enough for references that I now know how to spell their faction name!) including a whole bunch of fast and choppy elements. 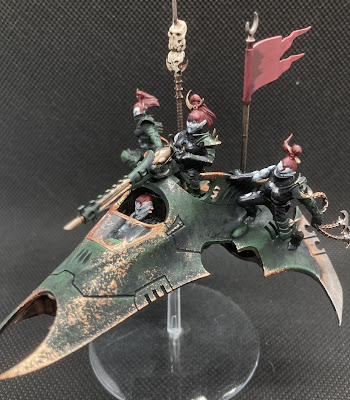 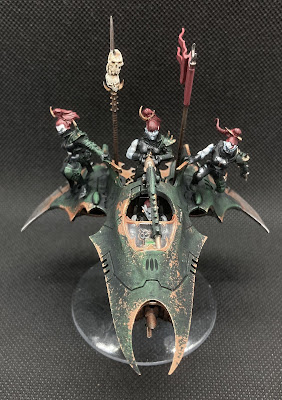 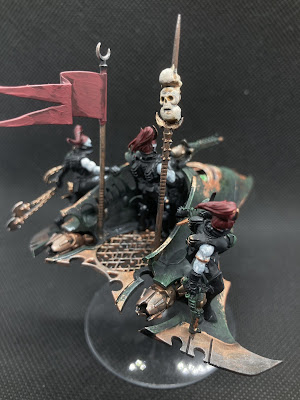 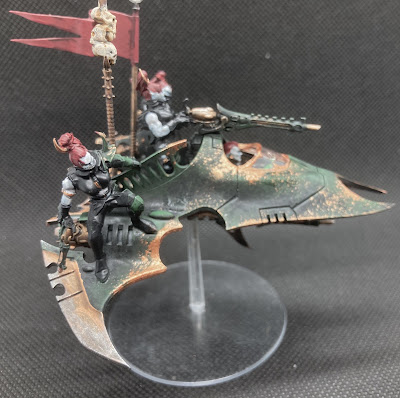 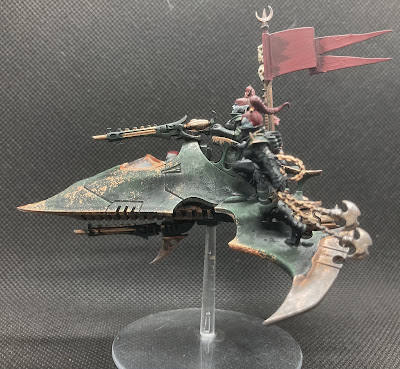 I enjoyed painting the Venom, using similar techniques to the Talos from the last batch, but this time weathering with a sponge rather than drybrush and painting large chipped areas. The sponge is fun, and I like the effect, after using it on Ghaz and Dave it's quickly becoming a favourite of mine. 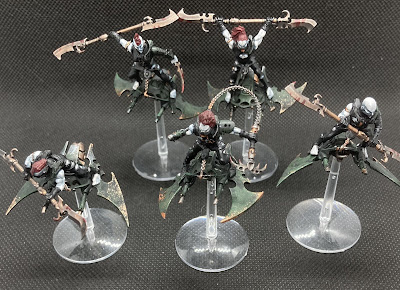 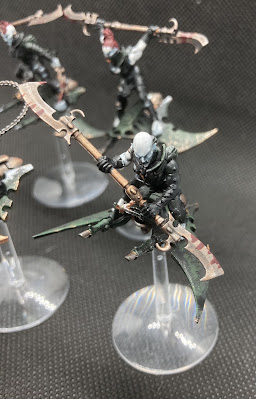 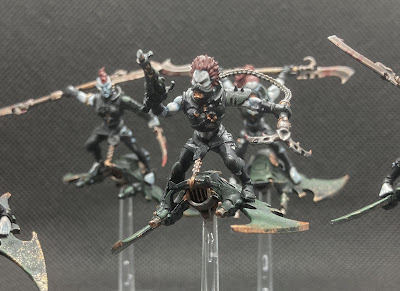 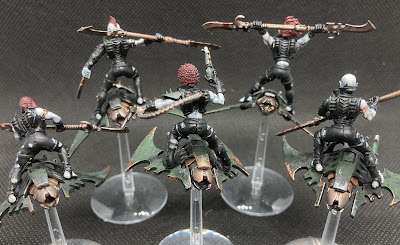 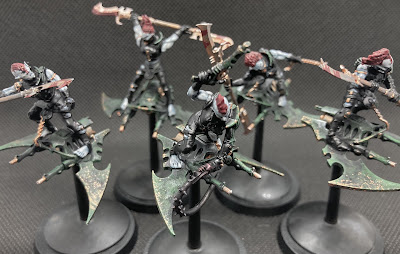 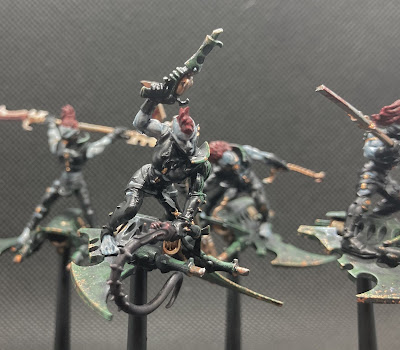 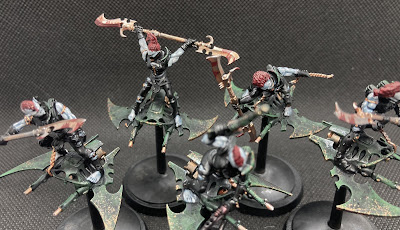 Next I worked on Hellions - ten of them, split into fives here. Again the sponge came out for their hoverboards, while the rest was largely 'standard'. They are showing a fair bit of slightly bluish skin which gives them a distinct look from the Wracks of the last lot, but the green and brass colours should tie them in. 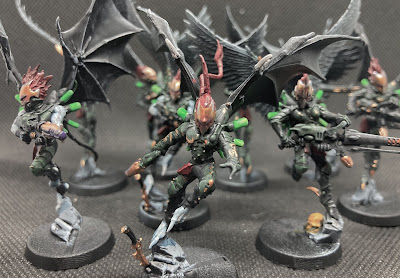 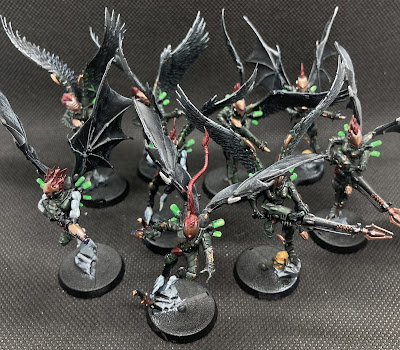 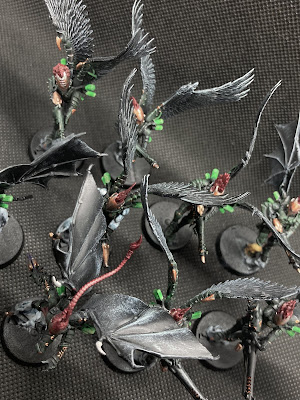 Most recently completed unit, the Scourges. Broke out the infamous Hexwraith Flame for their chem canister things attached to the wings. Otherwise lots of drybrushing for the green armour and grey wings of these. 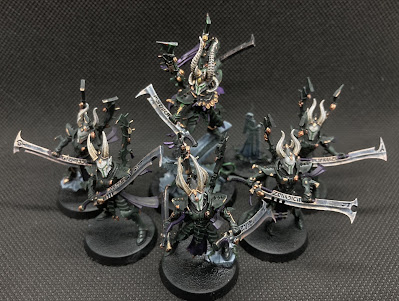 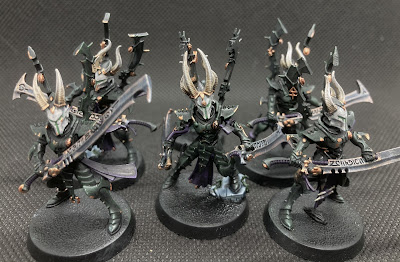 Finally the Incubi, and their leader, Drazhar, Master of Blades! I put a bit more effort into the big man - he got actual edge highlights rather than just drybrushing and washes over the armour. I'm also quite pleased with their weapons - painted the brass edges then gun metal highlights, before a wash with Space Wolf Grey contrast. 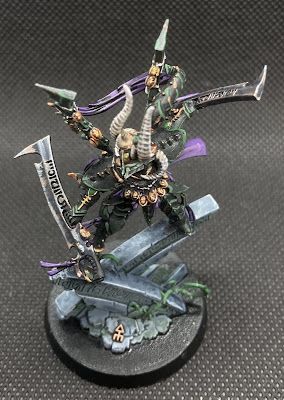 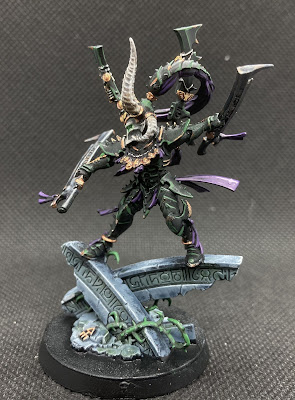 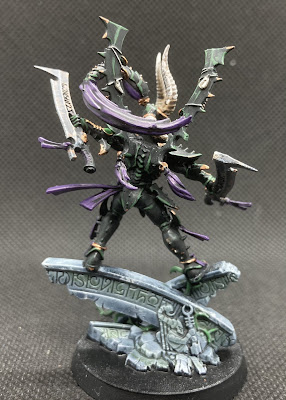 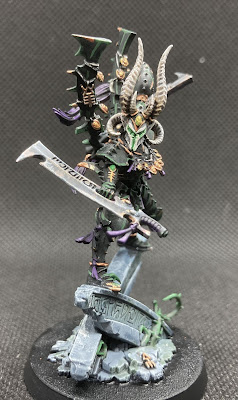 There we go, another batch done. Again I'm pleased with the results, especially given the fairly short time I put into them. I'm sure there will be more of these, so hopefully that can continue! Thanks for looking, and stay safe.
Posted by Redtoof at 14:02 No comments:

Hello!
I did another Narrative Wargamer Podcast with 'Mr Narrative Wargamer' Tony, which I'm mentioning in a blog post mainly for completeness. It's largely about the Flashpoint Argovon series that has run in recent White Dwarfs, a cool narrative campaign to run with a gaming group over three phases. You can find it here, or in all the usual podcast places. 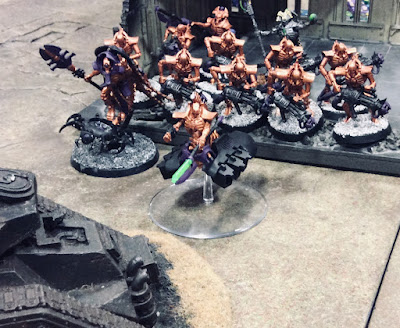 The Argovon campaign seems to be primarily designed for Crusade and based around the Pariah Nexus, with rules for gathering necron inspired xenotech. Though it allows for any kind of play, even a matched play campaign if you wanted, and of course with anything like this you could put it wherever you want in the lore with a bit of tinkering. I'm considering using it myself for Tabletop Simulator games, which have been the only chance most of us have had to play 40k for a while. (It is currently early 2021 - if you are reading this in the future, hopefully it got better from here!)
Anyway, hope you enjoy the podcast, and stay safe!
Posted by Redtoof at 13:46 No comments: