October has been a bit light on the hobby side of things, but I did manage to get to a few great games of 40k. One of which was a huge, multiplayer, narrative game set on Rynn's World, featuring three Ork players (myself included) taking on the Crimson Fists Space Marines defending their homeworld, and their allies, the Mordian Iron Guard, all of us members of the DZTV community. This was, fairly obviously, a narrative game, with the objective being to hold the central ruins at 'the end'. Each side had 3750 points to play with, split evenly between the players, and each player's force was considered it's own army, so got warlord traits, relics, and the full command points for being battle forged, though they were not able to be shared among the team, and were not allowed to be used for command point re-rolls!

Apologies in advance, with five players and an awful lot of models on the table, my memory is a bit fuzzy on the exact details, so this report will be more of a summary than a blow-by-blow write up. So pretty much the same as normal then!

On the side of the Orks, we were 'led' by Richie, our host and one of the driving forces behind the No Surrender events. His Goffs featured a core of 50 Boyz and some characters, plus a huge blob of Stormboyz and three teleporting Deffdreads. Also on our side was Felix, with extra stompy Bad Moons, with a couple of 'orkanauts, some Deffdreads and Killa Kans and a bunch of grots. Then it was my Snakebites. I went for a slightly unusual elite mechanised force with Tankbustas, Nobz and characters in a couple of battle wagons, plus the Gorkanaut (who sadly went for a bit of a dive off the table before the game so was missing several gubbins.) 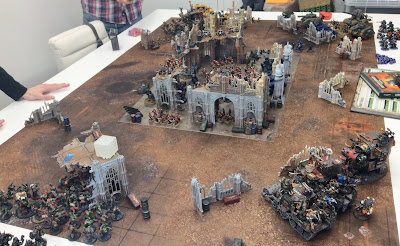 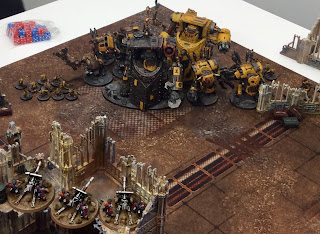 Standing in our way were the stoic Crimson Fists of John B, with an assortment of tactical marines, dreadnoughts and tanks led by Pedro Kantor. Notably this was the day of the release of the Imperial Fists supplement, but John hadn't had time to get to the shop to buy it, let alone read through it and absorb all the info, so the new rules were not in play in this game. Standing by their side were the equally stoic Mordian Iron Guard run by the appropriately named Mordian John (seen here on Moarhammer). There was whole load of infantry squads, along with a mix of supporting characters and of course some tanks. 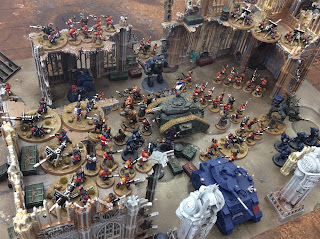 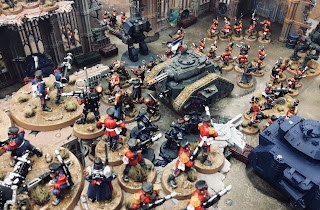 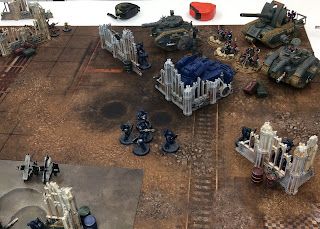 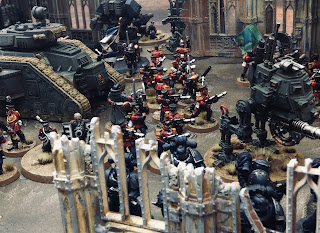 The Imperial forces formed up in the centre, with an artillery barrage in the fourth corner that wasn't covered in Orks. And with that, the greenskins closed in for the first turn! 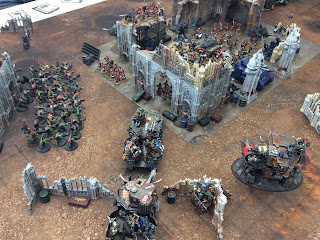 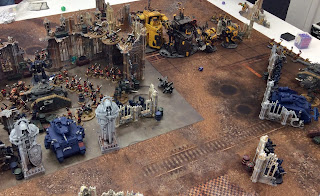 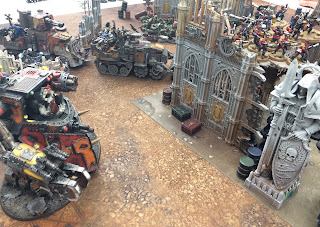 The Orks closed the gap, opening fire across the lines. The Bad Moons focused on the artillery, while the Goffs and Snakebites pincered in on the centre. Most notably from my perspective, my Tankbustas killed of the Predator in one volley, while Warboss Redtoof chucked Brogg's Buzzbomb aka The Jar of Bees up onto the battlements, killing off a couple of lascannons and a nearby officer! I think the Bad Moons also stripped some of the Mordian heavy weapons off their emplacements. 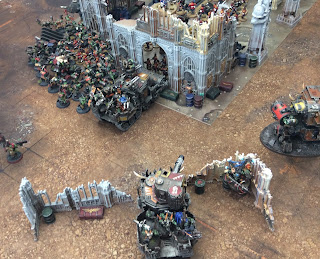 In the fight phase a huge mob of Goffs swarmed in, overrunning a guard squad with ease. My deff rolla also managed to poke in through a doorway and mince a few more. However the guns of the Imperium were soon brought to bare... 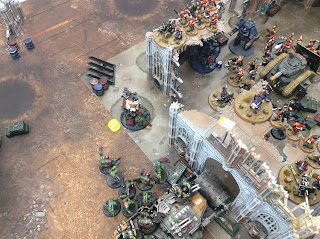 Not many Goffs left after that! We also lost the Morkanaut from the other flank, though I got away with minimal damage. The Mordians had cleared their lines for a moment, but there were plenty more Orks... 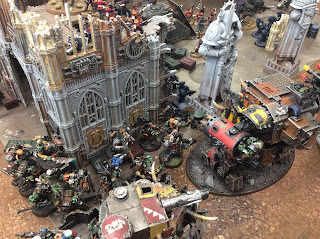 The Nobz disembarked, and the Gorknaut lined up some shots. Our shooting was fairly ineffectual, but the charge phase would be important... 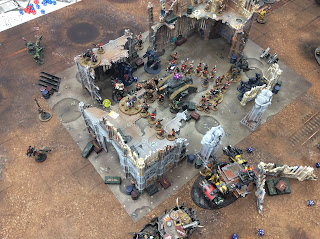 Redtoof and the Nobz piled into the Mordians and Crimson Fists, killing off a guard squad and two tactical units. Pedro Kantor himself was also a target, but he interrupted the combat and punched out several of the hulking Orks. Command points were spent however to get them to fight again, and their big choppas downed the Chapter master, though not before he fought again and brought more of them down with him. Importantly the last remaining Nob managed to tie up the Punisher to keep us safe from the bullet hose for a turn or more. 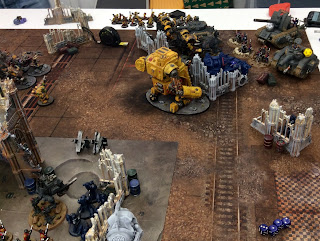 Elsewhere the Bad Moons were making progress on the artillery, piling in and shutting down some of the big guns.

The Imperial forces found themselves without many of their big guns and had to make the most of their scattered heavy weapons. They managed to take out my Gorkanaut however, but amusingly the guard's priest and psyker were unable to tear down the last Nob, who continued to hold up the Punisher. Redtoof himself took some dakka, but managed to stay relatively intact. 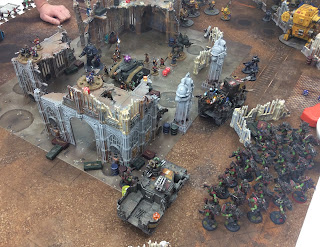 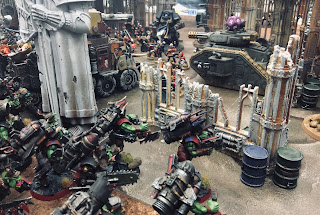 Goff reinforcements started to pile in, as the Bad Moons closed the noose on the artillery corner. The Stormboyz were easily able to dispatch a tactical squad and slingshot themselves closer to the objective, while the Tankbustas successfully split fire to remove a Venerable Dreadnought and damage a Contemptor. The Imperium was starting to get thin on the ground, but they weren't through yet... 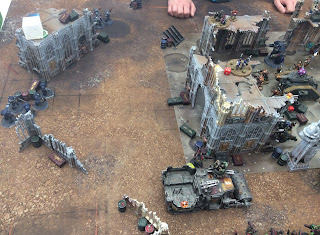 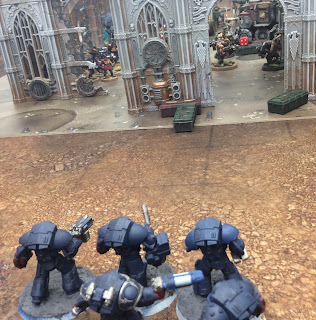 Crimson Fists of the first company had arrived on the battlefield, three squads of Terminators and a Captain teleported into the less occupied side of the battlefield and began marching on the objective, gunning down Ork stragglers. 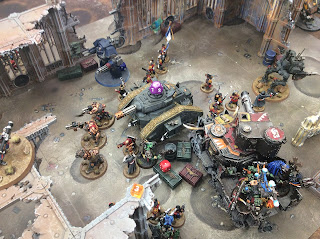 Back in the centre, blood and bodies filled the ruins, but still the battle raged. The Tankbustas' wagon rammed into the Punisher to keep it locked up while also putting some greenskins right were they wanted to be. 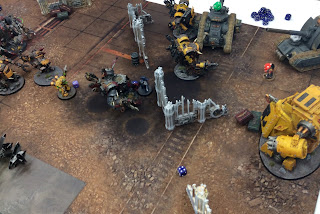 Things were getting interesting in the corner, with the Bad Moons running through the Imperial tanks, supported by the Goff Deffdreads from the tellyporta. A brave Crimson Fist Lieutenant held the charge for several turns however, punching chunks off the walkers, before eventually succumbing to one of several catastrophic explosions. The artillery had been effectively dealt with, but it had taken a lot of Orks out of the fight.

Crunch time. The Stormboyz piled into the centre, removing most of the Mordian resistance. Tankbustas and their wagon dealt with the Exterminator, while Redtoof himself survived a charge from Ogryns, battering them in return with his powerklaw. 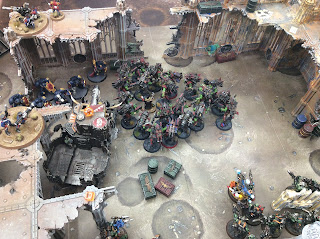 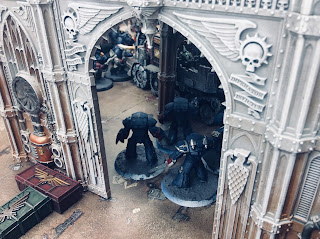 With night drawing in, it looked like it would come down to the actions of the First Company, could they clear the centre? Would the Orks hold against them? 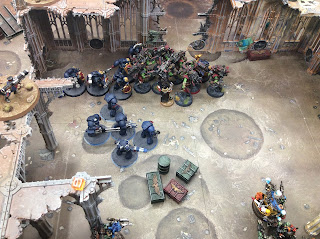 Many, Stormboyz were cut down, and my last wagon was destroyed, but Redtoof and the Tankbustas still stood. (And one stubborn Commissar...) 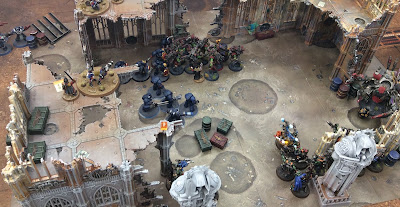 With more Terminators piling in from one flank, but a host of Ork walkers stomping in from the other, we looked at the battlefield. Almost all the infantry lay dead. Orks, Mordians and Space Marines were piled up in crumpled heaps. Though the elite units still stood, neither side would have the manpower to hold this position. It was declared a stalemate, with both sides falling back to conserve their strength to fight another day.

Well, that was epic! In the end we managed to reach the end of turn 4, and if we had more time I think either outcome was possible given what was left near the centre. As much fun as it would be to see the Terminators and the Deffdreads duke it out, a draw feels like a fair result for what was a bloody battle for all involved, and a great laugh. Richie was an excellent host and all the players were in the right spirit - we didn't worry too much about playing optimally or getting all the rules exactly right, this was about the narrative of a huge, desperate, exceptionally bloody battle! Very much what you'd hope and expect from the DZTV community crowd.
Posted by Redtoof at 16:35 5 comments:

A little while ago I played a battle report with SorcererDave where my Ryza AdMech took on his Eldar. Well, if you watched that report you’ll know it ended pretty badly for everyone involved. So here is the follow up battle, involving the Aeldari trying to fix the mess they created with their broken webway gate that just happened to start spewing out daemons after the Adeptus Mechanicus definitely didn’t touch it...


This game was a lot of fun, lots of banter and full on narrative mode with a custom scenario and eyeballed army balancing. And with all that, a very close, tense finish. Can the Aeldari of Craftworld Becareth close the webway gate before it’s too late? Will the Great Unclean One get to spread his grandfather’s gifts? Will any of the Skitarii survive? Find out by watching the report!
Posted by Redtoof at 13:38 No comments: