Hello!
I recently played a couple of non-filmed games of 40k with SorcererDave while we got to grips with the new rules a bit and did some (very vague) brainstorming for the next instalment of the Reuvengrad Campaign. Since he'd not played the new edition, or any 40k at all since February, we decided to do a couple of 500 point combat patrol games to keep it simple-ish.
For the first game we played the basic Only War mission from the 9th edition core rules. Simply 4 objectives, score a point for each you hold at the start of your turn and an extra point if you slay the enemy warlord. 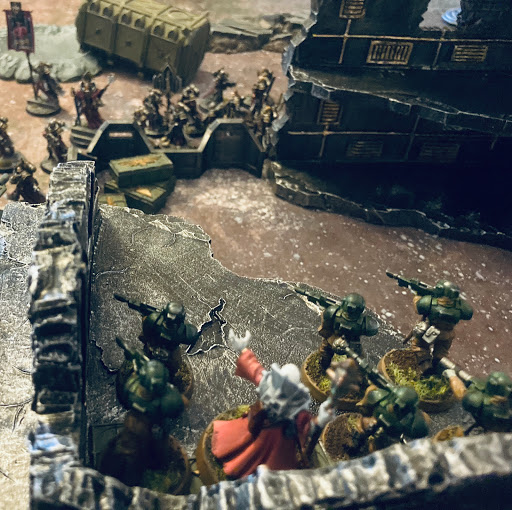 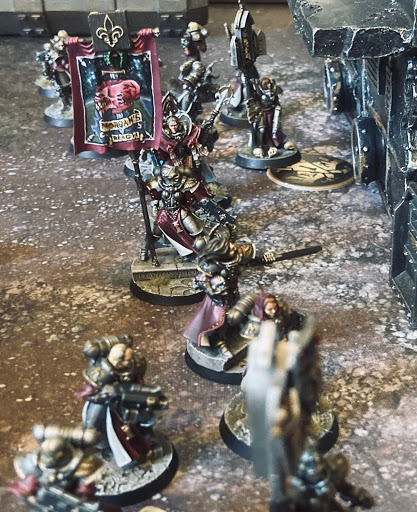 That's a bloody cheeky banner Dave! The Sorcerer took his Adepta Sororitas out for a spin, building a solid defensive blob of nuns to cause me issues. I forget the exact list, but it was a Valorous Heart patrol (they get a 6+ 'feel no pain' and to ignore -1 AP modifiers, and -2 if in range of the Imagifier) a bit like this:
HQ: Canoness (Blessed blade, plasma pistol, Warlord Trait: Impervious to Pain, Relic: Mantle of Ophelia)
Troops: 3x 10 Battle Sisters (Assorted special weapons and Simulacrum Imperialis)
Elites: Imagifier (Heroine in the making: Beacon of Faith) 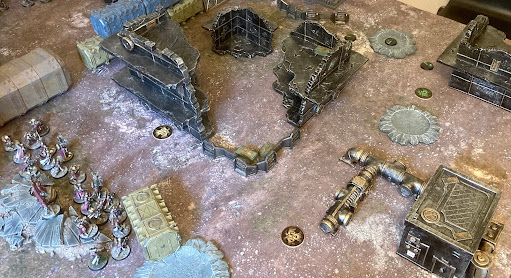 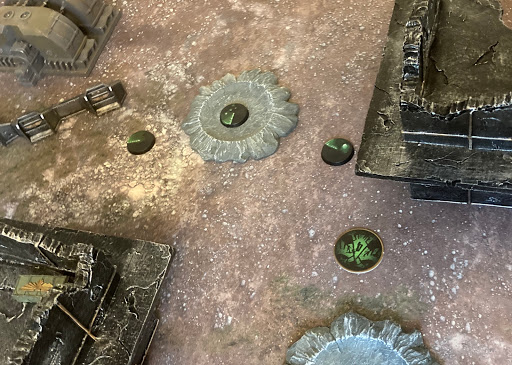 With the mission chosen and objectives set out, we 'deployed' - though being Genestealer Cults I cheated and just put some ambush markers down. I also had the Kelermorph ready to pop up from underground. Dave chose to put one of his units (one with a couple of meltas) into strategic reserve for a command point. It looked like we both had two easily grab-able objectives near our deployment zones, so the game would probably be won or lost either in attempts to take the enemy objectives or in losing our warlords. I won the roll for first turn, so the Cult took the initiative. 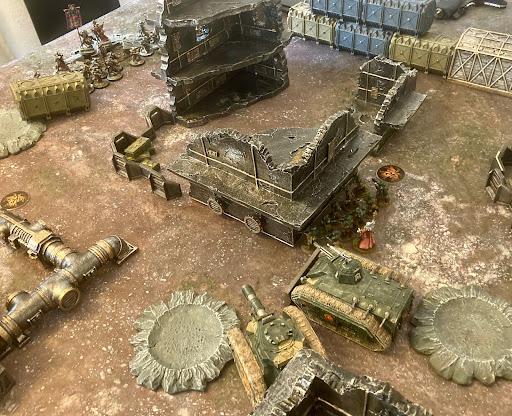 Turn one was fairly uneventful, the Cult moved up to cover their objectives and get a few shots in on the sisters, which bounced off their power armour thanks to their Stoic Endurance trait and the Imagifier - ignoring the -2 AP on the battle cannon! In response the Sisters marched up onto their objectives and plinked a few bolter shells off the armoured vehicles of the Brood Brothers. 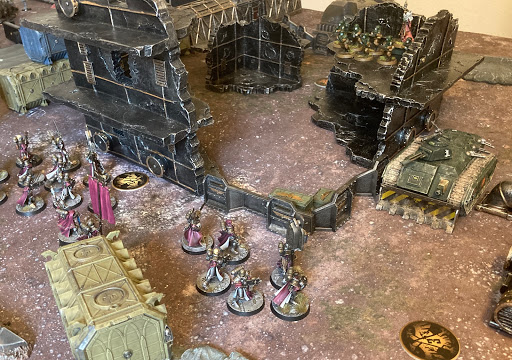 Turn 2 saw things heat up a bit. The Cult got into position to pour fire into the Sisters in the open, while the Kelermorph popped up from hiding. It was A Perfect Ambush, effectively meaning he could shoot twice, once in the movement phase and once in the shooting phase. He aimed at that bloody banner, but when all his guns ran empty, thanks to miracle dice and her special rules, the Imagifier remained standing. A few of the other sisters fell though under sustained firepower, but not enough to shift them off the objective. In retaliation the outflanking battle sisters arrived from strategic reserve to level their meltas at the Leman Russ, while the other Sororitas turned to gun down the unfortunate Kelermorph. The Leman Russ suffered minor damage, but more importantly the Battle Sisters near the Chimera decided to charge into it, stopping it rolling past them and onto the objective.
In my turn three the Cult opened fire once more, the Chimera knocking down some of the sisters and close range, and then running one over, while the Leman Russ backed up a bit and unloaded the battle cannon into the sneaky melta sisters. They didn't need their banner however as poor shooting and good saves left the unit mostly intact. 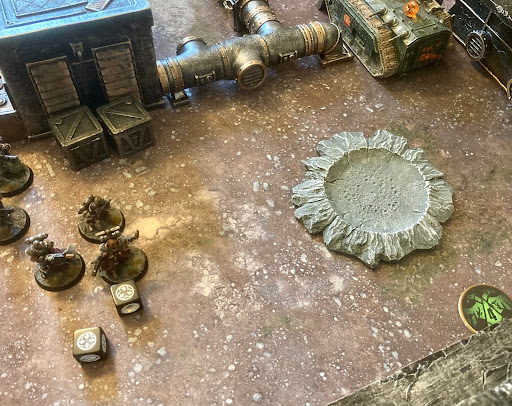 Sisters turn three, and the meltas had warmed up, reducing the Russ to slag. Elsewhere a few Brood Brothers were slain, but the Chimera remained in combat and the squad protecting the objective from it was looking thin on the ground. 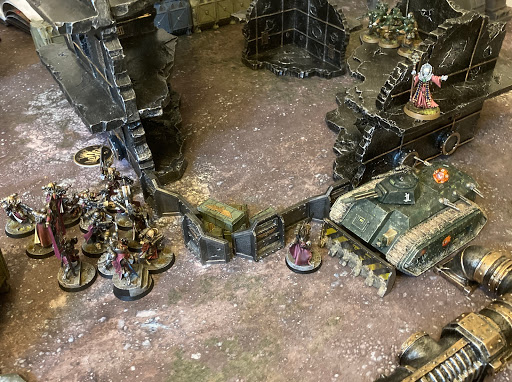 Turn 4, with the Russ gone I was now only scoring one objective and I knew I had to make a move to try and top the Sisters scoring both of theirs. The Magus jumped forward to smite the squad, though it was denied by the faith of the Sisters, thanks to one of their Sacred Rites they had performed before the battle. The Chimera did sterling work reducing the squad to just the Superior however, and denying that objective. 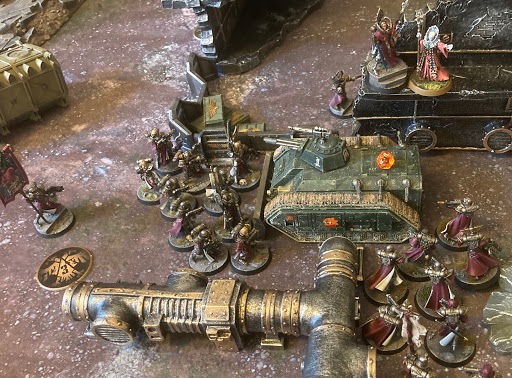 On equal points and with one turn to go, the Sisters went in for the kill, mobbing the Chimera, while the Imagifier planted her banner at the objective. Importantly the Canoness made it to melee with the Magus, looking to cut the head from the snake, so to speak. 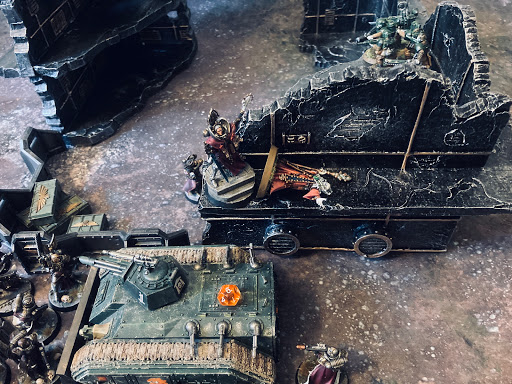 And in a not-in-any-way close contest, the Canoness cut the Magus down. With that point for slay the warlord, and the fact we would both be getting a point for holding objectives, I needed to kill the Canoness to claim a draw. However with half a Brood Brother squad left and the Chimera unhelpfully not exploding, it wasn't going to happen, and it was a victory for the Adepta Sororitas.
This was a fun, if not particularly even, little battle. I'll be writing up the second game later, so I'll save most of my thoughts on Combat Patrol sized games for the end of that one, but generally I'm a fan, and a fan of the fact that GW seem to want to push small 500 point games as a legitimate way to play. I also quite enjoyed playing this simple Only War mission. It's the one included in the free Core Rules document, so it's literally the 'standard' mission, but it really captures the 9th edition mission style (objectives are priority over killing your opponent - you need to be scoring throughout the game) without the added complexity of secondary objectives or agendas that lead to lots of admin. I think it would be a shame if this scenario was disregarded by the community, it is one of the few proper 'casual' missions in the book, and that's a very large niche that's not very well filled at the moment.
Hope you had fun reading, and maybe consider playing this mission if you've been feeling the new 40k is a bit too much. Stay safe out there.
Posted by Redtoof at 15:58