Hello!
Game two of the Combat Patrol night with SorcererDave. This time we decided to step it up a bit, and play one of the three matched play combat patrol scenarios. We settled on the first one, Incisive Attack, which let us pretty much play the same board and deployment as before, only with the objectives shifted around. A unique feature of this mission is that once an objective is held, it remains held by that side until the enemy forces claim it, meaning you can continue to score a home objective while pushing forward with all your units, encouraging a nice big central scrum. Once again Dave was running the Sisters, but this time I took the Orks! WAAAGH! 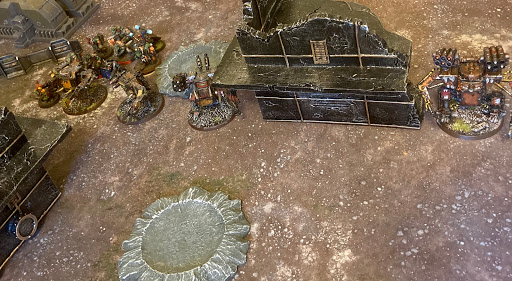 I raided Saga of the Beast and took the Tin 'Eads specialist mob - meaning all the walkers would get +1 to hit in melee. Kans hitting on 4s and Dreads hitting on 2s! I also spent some CP on kustom jobs, so my Kans were -1 to hit with ranged weapons, and the Dread gained 3 inches of movement. My Warlord trait refunded me one of these. For my secondaries I picked Slay the Warlord, Raise the Banners High and the mission specific objective Surgical Assault - offering 5 points if you hold the objective in your opponent's zone at the end of your turn.
HQ: Big Mek with Kustom Force Field (Warlord Trait: Follow Me Lads! Relic: Super Cybork Body)
Troops: 10 Boyz (Shootas, big shoota, Powerklaw)
Heavy Support: 4 Killa Kans (4 Rokkits, 2 Buzzsaws, 2 Kan klaws, Dirty Gubbinz), Deffdread (2 klaws, 2 rokkits, Orkymatic Pistons) 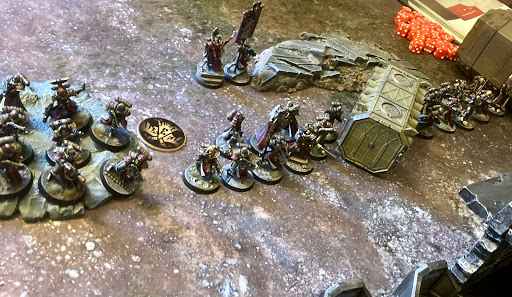 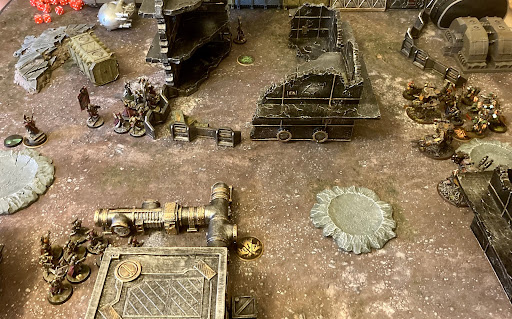 Everything was deployed on the board, no reserves, so with that we rolled off. I won the roll but reasoning the Sisters had little to hurt me at this range, let them spend a turn getting closer to me, which they did. The Canoness raised a banner, while the Sisters advanced up (they had +1 to this thanks to one of their sacred rites) to reach one of the central objective markers. Some small arms fire chipped a couple of wounds off a Kan, but in my turn the Mek fixed it. 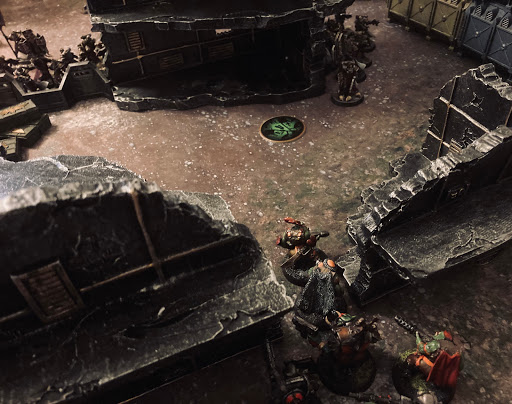 In my turn da boyz moved into position to cause some damage, while the Kans marched up under the force field and the Dread zoomed up the flank to sit behind a building and out of line of sight of most of the meltas. But then, disaster! The boyz failed their charge! That put them in a precarious position, and gifted the Sisters a whole load of Primary points for holding one, two and more than me!
In return, those boys were punished, dropping the unit down to a mere two models - though after morale there was importantly still one left. The sisters also managed to get a single melta shot on my Dread (and in doing so got onto the third objective) and dropped it down below half wounds. Ouch! 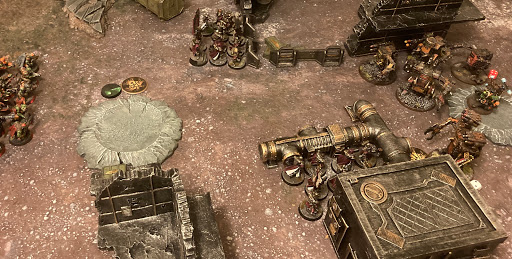 My turn two needed to be a counter punch - the Kans and Dread got into range for a charge at the Sisters by the pipes, while that last boy legged it and called his mates - Unstoppable Green Tide was played getting my Boyz right up behind the sisters, with shots and a charge on their characters. This could be a big swing in points, to potentially hold the far objective, remove the banner, slay the warlord and get rid of two of the most expensive models. Of course their shooting wasn't the best, and then they failed their charge. 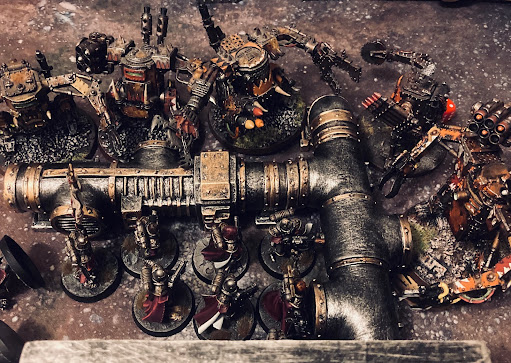 The Kans and Dread made it in, but needed a command point to re-roll the Kan charge. Poor rolls in combat resulted in the Sisters still standing defiantly on the objective. Not the turn I needed. Going into their turn three the sisters once again racked up 15 points on the Primary. 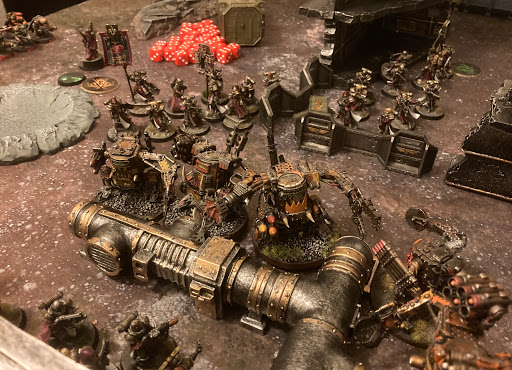 Dropping out of combat, the rest of the sisters lined up their bolters and meltas to unload into the Kans, while the Canoness bravely opted to take care of those Ork boyz herself. The Shooting was a mixed bag - the Kans lost two of their number, taking a sister with them due to an explosion, but they failed to kill the 2 wound Deffdread. 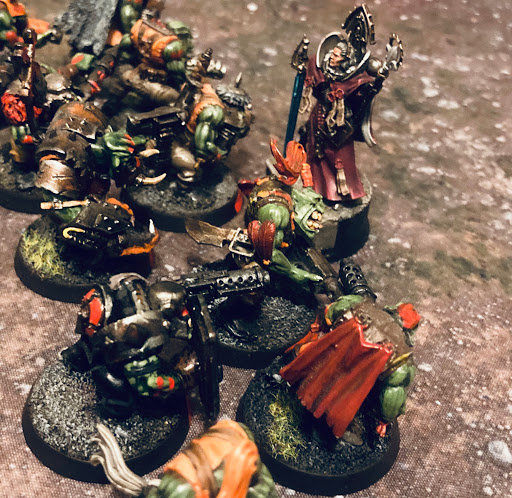 The Canoness cut down two of the Orks, and survived their return swings (including the powerklaw), but the boyz were kunnin' as well as brutal, and piled in around her to get within 3 inches of the undefended objective, earning me points for Surgical Assault and 10 Primary points in my turn 3. Maybe there was a way back for the Orks? 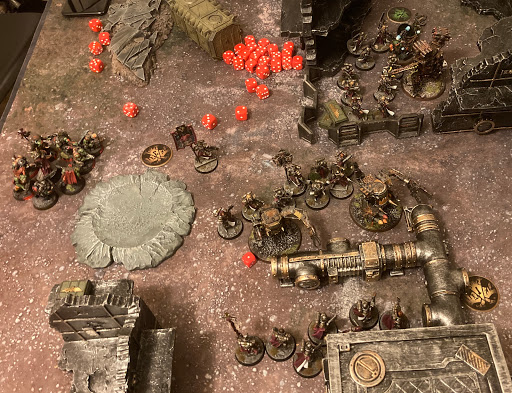 The Kans were tied up in combat (they killed a couple more sisters with shooting and melee), and there was no chance of charging over the pipes to the squad on objective 1, so the Deffdread and the Mek (fixing the machine up a few wounds) charged the unit in the ruins. I played the Dreaded Death Machine stratagem from Saga of the Beast, meaning every time the Dread killed a model it got to attack again - combined with hitting on 2s and wounding on 2s, it killed off six of the sisters! However, not enough to push them off the objective, gaining them 10 points for the primary and only 5 away from the maximum 45. Dropping back to defend their objectives from the Orks, the Sisters lined up their guns and felled another Kan, but were unable to bring enough firepower to the Dread. In melee the Canoness continued to swing, but took a solid hit from the Klaw and was reduced to 3 wounds.
In Ork turn 4 the Dread finished off the last Sisters in the ruins, and the Kan caused some harassment to the bolter squad that was trying to hold their rear objective. Then disaster for the Sisters! The Nob's powerklaw powered up, hitting and wounding three times! The Canoness fell, granting me 6 points for Slay the Warlord, and once I had piled in, the 5 points for Surgical Assault! 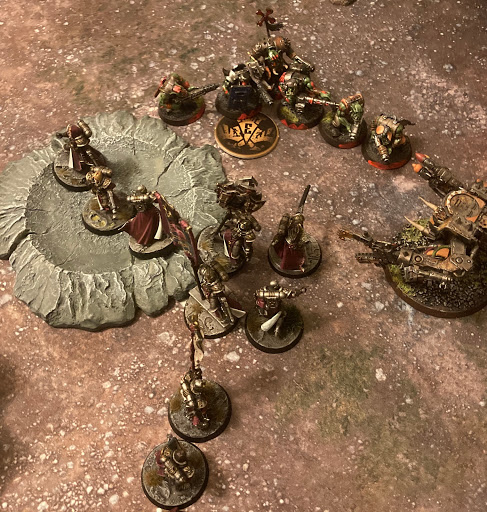 Turn 5 suddenly became quite close - I was behind on the Primary objectives, but I could get the full 15 on my turn 5 the Orks still held that Sisters home objective, plus Surgical Assault once more, and if I could kill off that Imagifier I'd steal it! The Sisters lined up and fired their bolters into the Boyz, disciplined shots cutting through them to shut the game down. Into my turn and I picked up a respectable 10, plus some more points for the banner on my objective that had been there since turn one and a cheeky extra one for a banner raised by the Big Mek on the ruins objective.
With the scored added up, Primary, Secondary and painting, it ended in a close run victory for the Adepta Sororitas, 75 to 62. A dramatic little game with the luck swinging heavily in Dave's favour early before coming right back to me at the end, but not quite enough to see the Orks over the line. That sisters infantry blob with the banner is a very tough nut to crack, and I can see that 500-ish point chunk be a solid base for many Sisters lists. My Deffdread definitely performed, but the Killa Kans were a bit disappointing, and gave away a load of points for Bring it Down as well. Ultimately I think I lacked the infantry presence to cap those middle objectives early (in both games), so perhaps more troops next time!
I really had fun playing the Combat Patrol games, it was interesting to see the game scale down very well and to get lots of little dramatic moments that might have been lost in a larger game. I think we need to give GW a bit more credit for how they've included these smaller scale games in the rulebook with their own missions and scaling on command points etc. The command points especially is very interesting - the one you get at the start of your turn suddenly becomes very powerful when you only start with two or three!
I was a bit surprised that even at 500 points we were picking three secondaries (compared to Crusade where the number of agendas you pick scales up with the size of the game) and it was quite tricky to pick them! I feel like some of the neglected ones like Slay the Warlord and First Strike might be well suited to this level where you are unlikely to maximise your points off them anyway. Similarly, some of the common picks might not be so suited to these small games - with so few units on the table and a smaller board size, Engage on All Fronts could actually be quite tricky, and even against an infantry heavy force I could have got a total of three points from Thin Their Ranks.
So I'd definitely recommend others give Combat Patrol a go, especially if you are new and struggling to build up a 'full' army, or if you are just a bit bored of samey 2000 point missions. Combat Patrol is there and it is a legitimate way to play the game. Hope you enjoyed, and stay safe.
Posted by Redtoof at 12:20