Hello!
If you've been keeping up with my progress this year, you'll know that I've been painting some Death Guard after discovering the wonders of the sponge. Well apparently at least one other person was interested because I was commissioned to paint another Death Guard force, this time based on the Pallid Hand scheme. 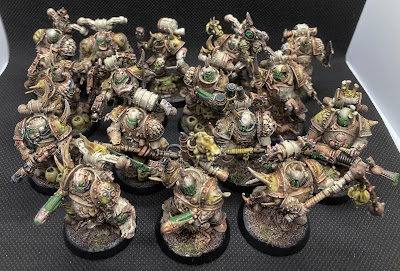 So here's the first batch, a bunch of Plague Marines. As you can see they have a similar dirty, disorganised look to mine, thanks to the use of sponging and contrast and washes. For these though I took a bit of a cue from my Poxwalkers, initially hitting them with a brown spray, then a bone zenithal, then some metal and contrast for details, and finally a bone sponged highlight layer. I'm pleased with the very mottled, chipped look.

Here's some bolter marines, some of which are the Space Marine Heroes models, and the others have nice resin bases.

Next, some special weapons and banner guys. Particularly happy with the melta gun guy who's weapon looks nice and crusty. 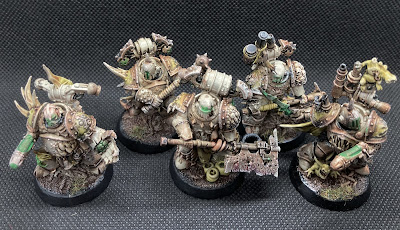 Melee models and champions. No idea if that cleaver is good, but it looks cool! 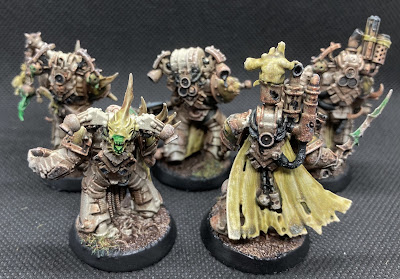 Rear shot. Really like the weird Plaguebearer face on the back of the fist champion - the Hexwraith for the glowing bits works nicely for me. 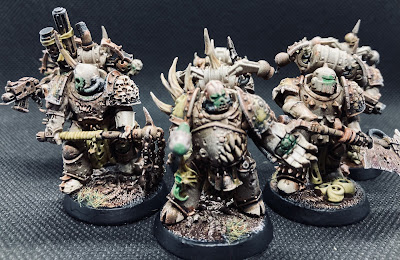 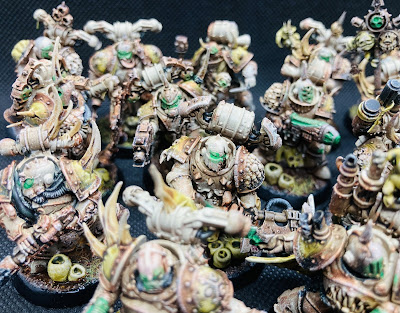 Anyway, I hope you like this second Death Guard force. Seems the client really likes them so that's good, and it means there's definitely more coming! Thanks for looking, and stay safe out there.
Posted by Redtoof at 14:49