Here's the forth of my reports from the Element Games Grand Slam 2018 40k event that I attended with regular opponent John recently. I took this list. In case you don't want to follow the link, I took a mixed Imperium force with an Adeptus Mechanicus battalion and an Imperial Knight super heavy detachment.

Game 4. Day 2. With 2 Primarchs already killed, I ran into John (not the regular one) with Guilliman led Howling Griffon Primaris marines. A chance for the hat-trick! His list was something like...

I think we both knew this looked like a favorable match up for me. I had lots of high damage, high AP weapons that the Primaris would not like one bit. The missions were Resupply Drop and Tactical Escalation.

As an aside, this was a very orange game! 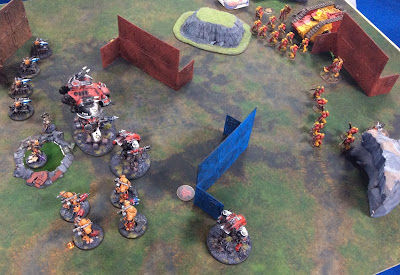 John got first turn, and mostly spent it advancing into position. Shots from the Spartan bounced off Aegis/Shroudpsalm robots, dealing 3 wounds to me and 3 mortal wounds bounced back to him. Some marines, including the Librarian, had moved into a close position behind the middle brown wall, while the rest formed a firing line.

In response, I moved up and made sure my deployment zone was pretty much screened out from the smash captain and jumpy dudes. The Valiant wasn't in range with most of it's weapons, but the rest of my force fired with deadly effect. Many marines were killed, while both Armigers got hits off on the Spartan, dropping it right down to about 6 wounds. 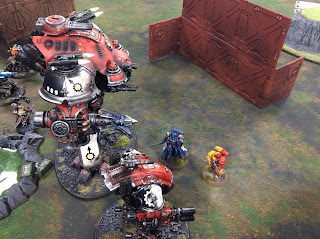 Time for heroes from the Howling Griffons. The Librarian and his one remaining Intercessor buddy ran out in front of the Knights and cast Null Zone. Shooting eventually took down the Armiger, some good saves forcing John to fire all the lascannons from the Spartan at it, just to make sure. The Jumpy dudes also found a spot to land and heavy boltered the Rangers into a fine mist. The Valiant, being a character due to spending command points at the start, heroically intervened into the Librarian. The mighty psyker struck the Knight twice with his force sword, once before, and once after getting kicked in the head. 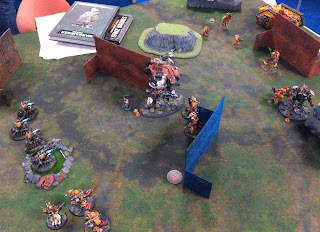 More firepower from my force blasted away, killing off the recently arrived Inceptors and gutting most of the remaining Primaris squads. Thanks to the ancient, the Hellblasters proved to be more deadly in my turn than in John's, putting wounds on the Armiger and killing one of the Kataphrons. The remaining Warglaive charged in and killed the Apothecary.

With few models left, John dropped the smash captain in for a heroic charge on the Valiant, while Guilliman picked up some maelstrom points by finishing off the Armiger. He just about survived the overwatch and swung away with the Thunder hammer. The Valiant stood on him, but with his last gasps of air, he fought one more time, taking out the Dominus class! I had however saved plenty of command points for this, and thanks to 'Our Darkest Hour', it struggled back up to it's feet! 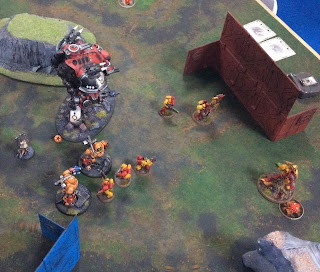 At this stage we were both picking up Maelstrom points, but with the Eternal War objectives revealed on turn 3 and the board control I had, it looked like I was going to be firmly in the lead. I pushed forward with the Valiant and Kastelans, looking to land a knock out blow. Many Marines fell, and the Valiant took out the Spartan with the Thundercoil harpoon. 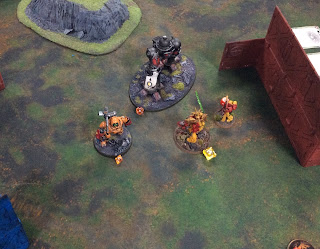 Guilliman decided he had had enough of the Valiant, and shot the last wounds off it with his gauntlet. I used Nobel Sacrifice to get it to explode, but sadly it did minimal damage to the Primarch (though it did kill off the Tech-priest Enginseer who had been running after it.) Bobby G then went over to slice the last fist robot in half as well. 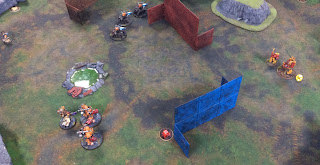 The Ancient soon fell, leaving just Guilliman alive for John. He was however still picking up the odd point here and there. To avoid being tabled, and giving me an automatic 20-0 victory, Guilliman hid behind a wall for the remaining turns. I was unable to entice him out and kill him, which gave me a solid, if not complete victory, 15-5. Courage and Honour indeed!

We had plenty of time left, so we played out what would have happened, if Bobby G had charged out on turn 7 for a glorious stab and grabbing some more victory points. It turned out he would have killed my shooting robots and grabbed an objective, before being shot down by Kataphrons. He then would have got back up again, and survived. John worked out that had that all happened, he probably would have scored enough points to draw the game. I think without the benefit of hindsight, he made the right choice though, it would have been a big risk to make that play when it was 'live'. Sadly my dream of 3 dead primarchs was denied either way, but a win is a win, and I happily took the 15 points.

On another table John (the regular opponent one) was playing out an epic Chaos vs Chaos clash, where his Noise Marines had done a number on an awful lot of cultists. The game ended when his opponent, with just Abaddon left on one wound, called that he would kill himself with his daemon sword. And he did. We laughed about that one all day, but importantly that gave John 20 points and put him well up the leaderboard for the final game. I was still pretty far down, but my scored were still progressing positively, and I knew that a solid victory in the last game would put me comfortably mid table.
Posted by Redtoof at 14:27