Here's the fifth of my reports from the Element Games Grand Slam 2018 40k event that I attended with regular opponent John recently. I took this list. In case you don't want to follow the link, I took a mixed Imperium force with an Adeptus Mechanicus battalion and an Imperial Knight super heavy detachment.

Game 5, I came up against Guy and his cool purple nurgle themed Chaos force. When I brought my army over he sighed a bit at the thought of 'another gunline', to which I assured him this was at least a gunline that would run up and try and kick him in the face as well. His list was something like:

I think Guy was a bit up against it here. He told me his list was built with the assumption that there would be Orks everywhere so he didn't have as much anti-tank stuff as it turned out he'd need. His army looked pretty tough and had some good damage output but with little to really hurt my Knights or Robots. I definitely didn't think this would be an easy game, but I knew Guy would have some tough choices. The missions were Retrieval and Targets of Opportunity, so the Maelstrom could be especially erratic. 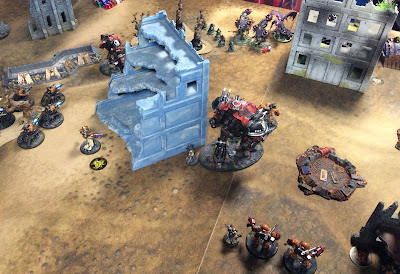 I got first turn, and as was becoming standard procedure the Valiant charged up the middle, and large chunks of the army moved up with it. I'd deliberately put the Kataphron Destroyers out of line of sight of the scary 3 damage autocannons of the Renegade Armigers. I think I drew the big game hunter card, so I pointed the Plasmas, Meltas and whatever else I could find at the bloat drones. One fell, and another was damaged, plus some of the screening cultists were killed. (Hilariously, Guy removed the whole squad out of habit, and had to place some back on the table after realising they could actually pass the leadership test at the end of the turn - which they did.) 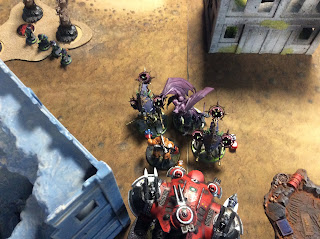 First turn for the nurgle force, and the remaining drones and non-warlord Prince charge up the middle to get at my fist robots. Elsewhere the Armigers lined up shots on the shooty Kastelans, but thanks to Aegis Protocols and Shroudpsalm, only one hit actually did damage (which my Datasmith insultingly fixed in my turn). In the fight phase the drones and Prince smashed one of the robots, but one still survived to punch (fairly ineffectually) back. 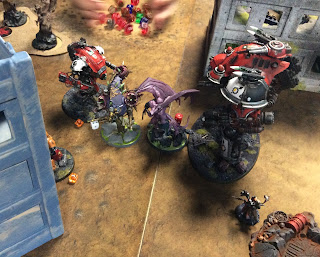 Time to go in for the kill on the drones/prince. I drew Area Denial and they were the only things standing there (once the remaining cultists had been removed). I sent one of the Armigers over to a corner to try and clear cultists off an objective they were defending, while the other teamed up with the Valiant to squash the stuff in the middle. The Destroyers overcharged and popped the Plasma Specialists stratagem to blast one of the crawlers to bits. Shooting killed one drone and nearly got the other. In the stompy phase, the Armiger failed to finish off the drone while the Valiant did a jig on the prince, but thanks to suppurating plate he survived.

At the end of the turn I actually spent command points to keep Area Denial in my hand for more points. First time for everything!

Guy's turn 2, and the Helverins decided to pick on a softer target. One of them shot the Destroyers and killed off 3 of them, putting them out of sight from the other one, forcing it to shoot elsewhere. The Robots and Armigers took a bit of damage, but the prince stayed in combat with the Valiant. His talons tore some more wounds off it, and thanks to casting Miasma of Pestilence, and that suppurating plate again, he survived his kicking once again! 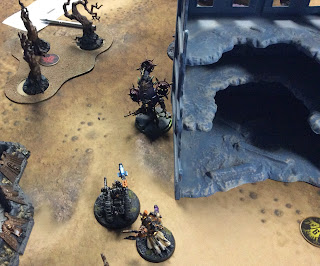 Turn 3. I threw a lot of firepower at the remaining drone, just about managing to finish it off. More shooting put some damage on the Armigers, but importantly the prince finally fell to the Conflagration cannon. The Valiant was now free to run over and mess with the nurgle castle.


Guy popped the nurglings down in the corners of my deployment zone to threaten the objectives, but I thoroughly scrubbed them off eventually with Radium carbines and Phosphor blasters. I also had an Armiger on the far corner objective in his deployment zone, so I was controlling three of the 4 eternal war objectives while still claiming Maelstrom points and blocking in his movement significantly. 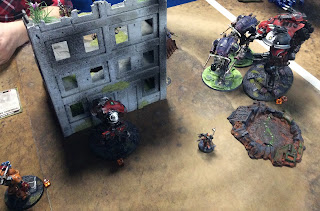 Getting up close and personal, the Valiant starting shooting and kicking all over the place, splitting fire, taking hits, being awesome. 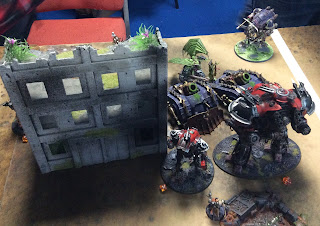 Eventually both Armigers fell, along with a crawler after a successful Harpooning. Guy was far behind on points but was going for glory, determined to kill the Valiant! He threw his warlord in, along with all the firepower he could muster. The Valiant stood defiant for a while, kicking the prince to death and surviving a hit from the Poxbringer's sword with a double six on the Taranis 'feel no pain' saves, before finally falling to a smite. Given that this was pretty much the end of the game and the event, and I was far ahead on points, and because it would be really cool, I spent the command points to get it to explode, doing loads of damage and killing the poor Enginseer once again. (I like to think the Knight just fell backwards and crushed him.)

We counted up points at the end but it was a crushing victory to me, 20-0 in tournament points. Not a forgone conclusion, but not a big surprise either, especially as I was rolling pretty hot and Guy's dice were only really interested in keeping that Daemon Prince alive. It was definitely a fun game for me, and I hope Guy had a laugh as well. In the end I put him down as my most sporting opponent. I think I could have justifiably made a case for any of my opponents, but I did especially like that he took the loss in his stride and just wanted to kill the big thing at the end.

Now that I had ended the event on a high note, I checked on John. Turns out he'd just tabled his last opponent, with Imperial soup. Once again his Noise Marines made short work of some flimsy humans. With our final results, we eagerly awaited the overall standings. I was pretty sure I'd got to roughly the middle, and it would be interesting to see just how high John had climbed after his round 1 mauling.
Posted by Redtoof at 22:52