As you may be aware, I recently got sucked in to Adeptus Titanicus, and I'm pleased to inform you that my enthusiasm has not waned. Working my way up, I have now built the Reaver titan! 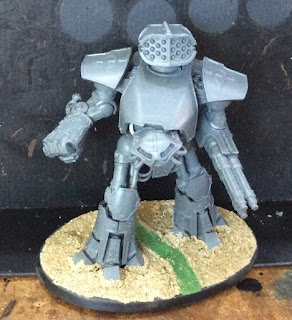 I decided I wanted to go for a striding forward pose, ideally in mid swing of the power fist, although as with the Warhounds I have used 10mm magnets to allow for interchangeability and future additions. 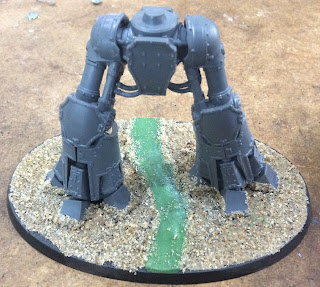 First step (ha!) was to build the legs and feet. Turns out this was the trickiest part, with many small components to fit and requiring a lot of attention to the instructions. I initially fitted the central lower leg components the wrong way around, and was confused as to why the armour plates didn't fit on. I had to tear the legs apart to correct this, which was frustrating. I only later found out that I had the feet the wrong way around as well (the sloping armour on the front toes is supposed to be angled slightly inwards instead of outwards) but by then it was too late. Hopefully it's not too obvious.

For the base I again put a bit of extra detail on there in the form of a winding old road between the legs. I think I'm going to go for a desert/ash wastes theme for the bases, so that road is going to look damaged and worn away, rather than a nice neat urban highway. 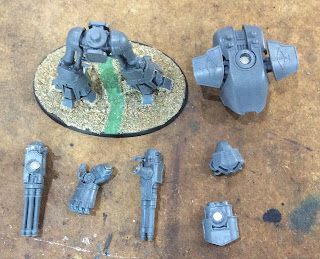 After the legs, I built the rest of the sections, including adding the magnets. I decided to go with the right handed power fist, clenched, plus the turbo laser on the left arm. The gatling blaster became an alternative right arm option. Sadly if using the shoulder sockets for the magnets, the weapons are limited to being for one side or the other. I plan on getting another Reaver at some point and making it's weapons fit the opposite arms, so I can run them with doubled up weapons or any other combination. 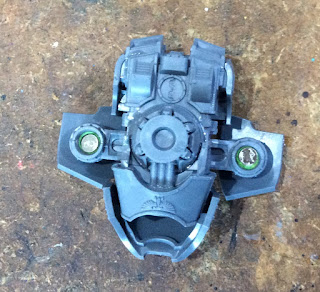 The magnets for the missile launcher were easy enough to fit - the 10mm ones slot perfectly into place. For the arms it was easy enough to drop the magnets into the shoulder joints on a blob of greenstuff, but the arms themselves required a bit of care. To make the magnets fit I had to remove a good chunk of the ball joints, which meant I had to make sure to cut at an angle so the arms wouldn't just hang down and look awkward. 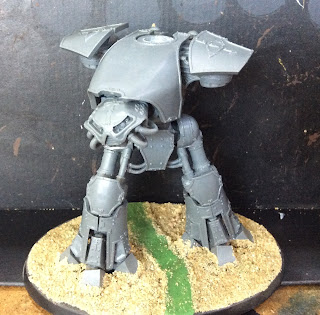 After that, it was time to stick the components together. I glued the body on at an angle to add to the impression of a big forward stride, and to look like it was swinging the fist with the momentum of the whole titan. The head then got stuck on at a slight angle, looking forward in line with the front toe, which I hoped would add to that feeling of movement. I think it did the trick of making what could have been a very static model look quite dynamic. 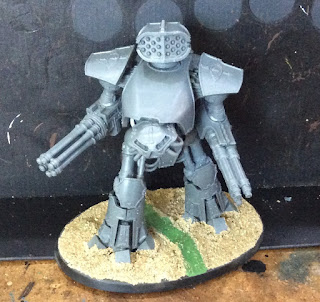 Here we are with the alternative weapon loadout. Given that the pose was primarily designed for the fist, I think the double guns still works quite well. It looks like it's aiming the turbo laser while swinging the gatling blaster into position. 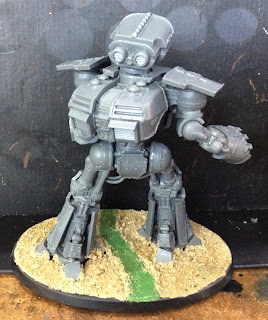 And finally, the maniple all together. I'm pretty pleased with them, and excited to get some paint on them. My plan is to get these three finished up before I move on to the rather intimidating Warlord titan.
Posted by Redtoof at 10:35