With the Orks done (for now), and the Genestealer Cult coming along nicely, I took the opportunity to collect a new thing. In particular, a maniple of titans for Adeptus Titanicus. I've been feeling the peer pressure from Mr A.P. Burn (aka the unofficial Adeptus Titanicus sales rep) and other Winters SEO/Moarhammer patrons for months, and after some cool battle reports I was pretty much hooked on the idea.

So I hopped over to Element Games and grabbed myself the rules and a box of mini-big stompy robots. They arrived in the post the next day, which was nice. (I apologise now for any Twitter followers who have already seen some of these pictures.) 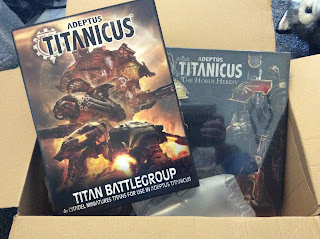 (Please ignore the cuddly wolf photobomb.) Anyway, after having a gawp at the pretty sprues and a flip through the lovely rulebook, I decided to make a start with the Warhounds. 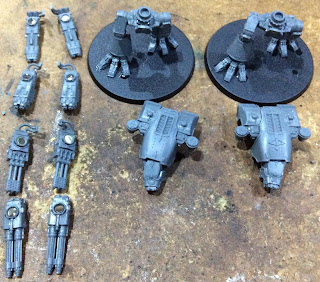 Here they are towards the end of the construction process. Pretty much followed the instructions, except for applying magnets for the weapons. When I got to the turbo lasers I found the cabling available on the sprue consists of two left and two right for the plasma blastgun, and only two left and two right for all the other guns. So the lasers had to go cable-less. You might also notice there is a big eye symbol on the carapace - I decided to side with the Warmaster on this one, and will paint these guys up as Legio Mortis. 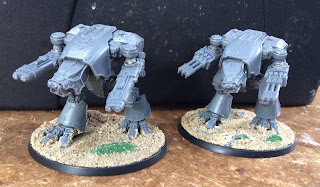 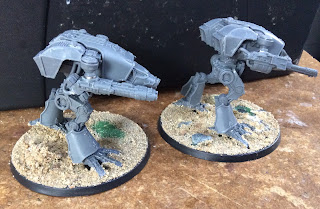 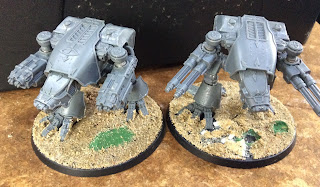 And here is what they look like now, torsos on and with alternative weapon options. Took a bit of extra time adding some assorted greenstuff craters and piles of rocks along with the sand on the bases. Ready for the undercoat, then paint, then to indiscriminately murder loyalists!