I recently dove into Adeptus Titanicus, quickly assembled a couple of Warhounds and then tackled the Reaver Titan. Then it was time to paint! I'd already decided I was going to run them as Legio Mortis, the Death's Heads, the baddest of the baddies. Partially because I've seen lots of foolish loyalists around, and partially because I just think they look cool.

So here is what we started with. Titans built, weapons magnetised, bases covered in stuff. I opted not to paint the armour plates separately from the main body, as with my Knights, I prefer to see the whole thing together while I'm painting. 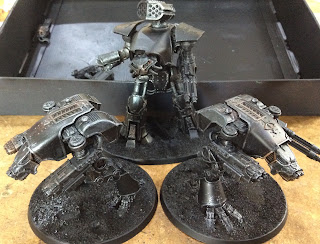 First step, spray black. Then on to the metal 'skeleton'. I gave the whole lot a drybrush of gunmetal, and a brass drybrush over select areas like vents and joints, followed by a liberal splash of Nuln Oil. After that had dried, I ran another quick drybrush of metal over the barrels of the guns. 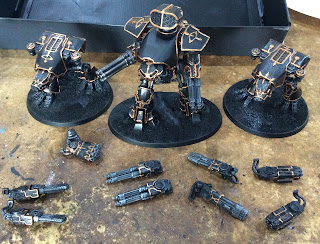 Next, I started painting the trim. There is quite a lot of it! Rather than the standard gold, I went with a slightly more subdued brass, which I later hit with a watered down green wash. I hoped to get the impression of a slightly corroded, decaying gold, just a hint of the corruption that was taking hold in the Legio Mortis during the Heresy. 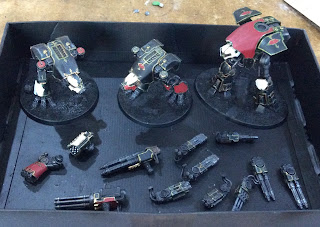 Blocking in the base colours. I tried to avoid too much colour on these, giving each titan a few bits of red and white along with the majority black. The Reaver did get the red carapace since the plate was pretty bare from details. The main exception is that I made sure they all had white featured prominently on their heads to match their nickname. 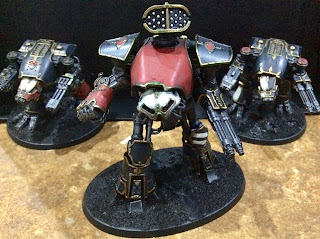 More work on the main colours. Several layers of each, of course. I used Vallejo Off White instead of pure white or a bone colour, and their Heavy Red, mixed with a bit of Bloody Red for the last layers, not painted up to the edges. The black was highlighted by mixing with Sombre Grey. The white was washed with slightly watered down Nuln Oil, and the red was rather heavily splashed with Agrax Earthshade. I had a go with masking tape to get some stripes on the Reaver, which worked out ok, but I didn't get the clean edges I'd like, so more practice with that technique probably needed. 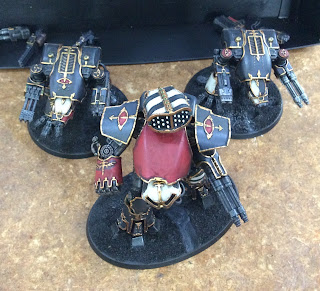 And then it was back to the trim. Highlighting with a mix of 50/50 brass and gold, covering most of the outward facing areas, but leaving some of the greenish tint showing under the edges or around the rivets. This took bloody ages, and required a fair amount of touching up of wayward brush work. 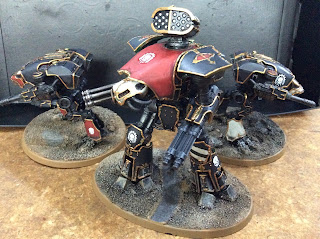 Into the home stretch. Transfers in position - I was surprised to find the official minis don't have many on them, so I kept it to two or three per titan. Then bases to paint. I went with heavy, inconsistent drybrushes of Vallejo Earth, Khaki and then lighter Off White. The edges were Earth and I mixed up a dark brownish grey for the road, rocks and other bits. I made sure the drybrushes went up the titan's feet a bit as well.

After those bits, I had fun with the Forgeworld weathering powders. A bit of Orange Rust on some of the metal skeleton, Black Soot heavily stippled onto the end of the gun barrels and over all the various vents and Dark Sand over the feet and onto the bases. Then some fun glowy bits - plasma glows, eye lenses etc. These were all a case of paint the general area in a watered down dark colour, then paint the main area in a lighter version, and finally a white or very light mix to pick out the centre. Plasma coils also had a blue wash. Finally, after all that was dry, I used Army Painter's anti-shine matt varnish spray to seal it all. I'd not normally do this over plastic minis, but it works well to seal in the weathering powders and tone them down, as well as cancelling the very obvious glossiness of the transfers.

And there you have it. Titans done! There will be pictures of the completed works in a later blog post, but here is a little sneak peak: 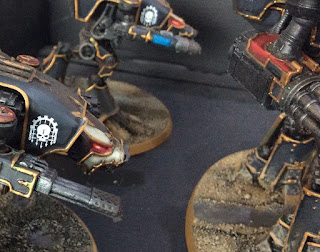