Over the weekend I went to the Deployment Zone TV Open Day at Element Games, and it was awesome! Here's Winters talking about it. 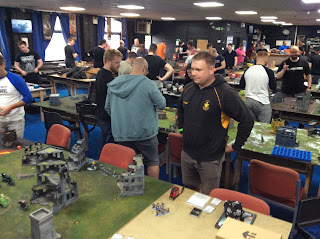 About a hundred assorted DZTV subscribers filled the North West Gaming Centre, listened to some characteristic (slightly still drunk) Winters and Liam rambling, drank many beers, spent too much money and played a lot of 40k. 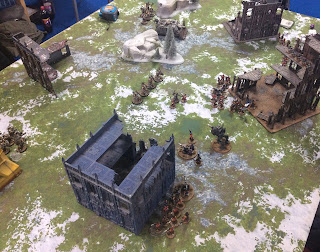 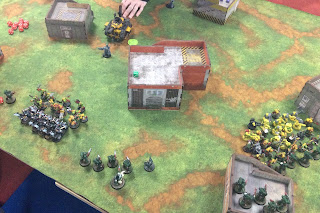 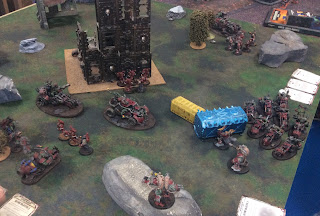 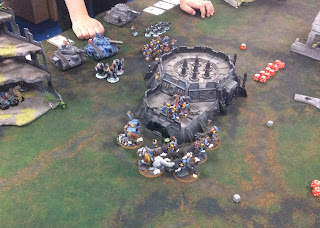 We learned, among other things, that people are willing to come from Germany to see Winters and Liam, that there is in fact a DZTV business plan and that Farseer Winters IS a thing!

Anyway, while I was there, I did of course play a few games of 40k. Many of us brought 1000 point lists for this, I decided to bring a fun, low model count list - an Alpha Legion Vanguard with a Daemon Prince, 3 Helbrutes, 2 Contemptors and 2 Obliterators. Equiped mostly with multimeltas and fists, I didn't think it'd be that effective, but in hindsight it was quite a tough list to crack for an average 1000 points.

First game was against another Dan. He is a new player with some Space Wolves, bringing mostly assorted Primaris, a Redemptor dread, and a couple of squads of grey hunters in a rhino. We played a classic Cleanse and Capture mission aka 3 cards a turn, every turn. 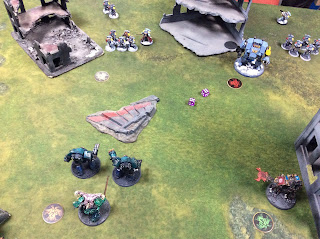 The Alpha Legion marched up the board, destroying the Rhino early. Firepower and this double 6 super smite did some damage but didn't stop the dreads reaching the enemy lines. 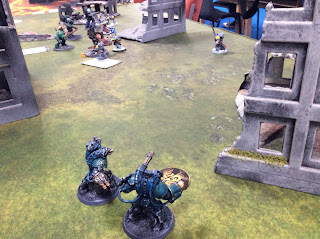 The objective cards told me to charge in, so I did. The oblits dropped in an deleted some intercessors, while the Khorne Helbrute charged in and chopped up the Redemptor. 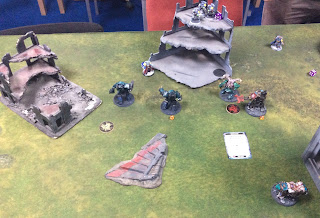 Dan's Wolves didn't have the luck of the cards or the dice, and were pretty quickly boxed in. The Rune priest and the Hellblasters did some decent work and eventually took out one of the Contemptors, but they eventually fell. The last wolf standing was the Lord, who took a charge from the Prince and very nearly survived, but for a failed rerolled invulnerable save. The Space Wolves fought bravely, but they were no match for the warp-touched war machines of the Alpha Legion.

Second game was against Gavin and his shiny new codex Space Marines. He again had mostly Primaris, with Aggressors, Interceptors, Hellblasters, some troops and the Captain/Lieutenant combo. His chapter were the Grey Skulls and were using the traits to allow them to ignore the penalty for firing assault weapons after advancing, and +3 range to their weapons. Again, we played Cleanse and Capture. 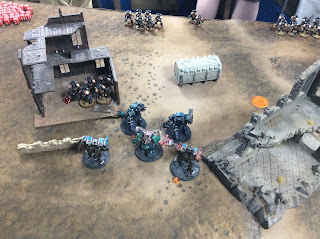 Gavin backlined most of his force, knowing I was coming to him, apart from the jumpy-dudes in reserve, and the Flamestorm Aggressors who were hiding behind this ruin. I stomped up the board, claiming some points while avoiding significant damage. Then in turn two I decided to charge the Aggressors. DO NOT DO THIS! The tactical doctrine had come into effect, and now they get to shoot twice in overwatch. The first Helbrute took 67 hits from 4 remaining Aggressors. It died. In the name of science, and the gambler's fallacy, I proceeded to charge and lose the two Contemptors and the Prince. The last 'brute managed to not die, but failed the charge anyway. This got interesting. 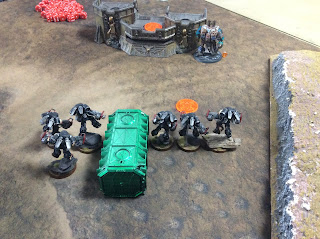 The Grey Skulls went for the kill, dropping the Interceptors in to shoot the last remaining Helbrute, who had just rage-killed some scouts, while also claiming the objective. Luckily for me, the dread survived. In my turn the Obliterators arrived to counter, and between them and the 'brute all the jumpy dudes fell. 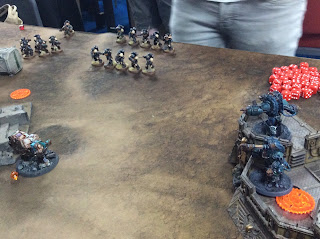 With the feared Aggressors all the way over the other side of the board, the dread and Oblits did some work on the right flank, keeping me in the lead on the points. Thanks the Hellblasters and rapid firing Intercessors, the Oblits eventually fell, but they took their toll. In the end the card gods did not favour Gavin and I ran away with it (literally, the last couple of turns featured the damaged Helbrute getting as far away from the Aggressors as possible).

The final game was against a familiar face. It was a continuation of sorts of this SorcererDave battle report featuring... Alpharius. 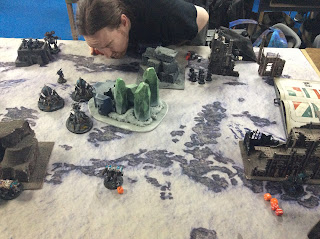 Yup, it was Alpha Legion vs Alpha Legion. The Fractured Truth vs The Hydra's Reach. Al took a list that was... quite tasty. Lord Discordant, Hammer jump lord, 3x5 Marines with Autocannons, 2 Venomcrawlers, and a Deredeo dreadnought. Because this one was... personal, we just played classic Kill Points. 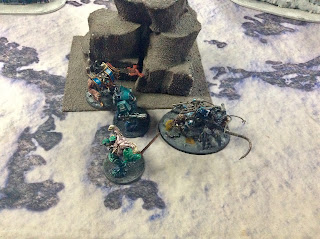 Al's shooting killed off the exposed Helbrute turn one, then the Disco lord charged in around a corner to kill another one. He walked into a bad place though and got slapped by the Daemon Prince and his buddies. The Venomcrawlers followed up coming around the corners, killed off the Prince but got beat up by the remaining dreads. 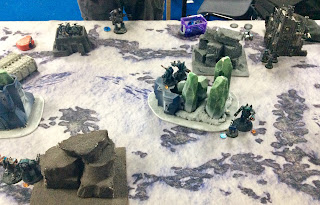 The Oblits dropped in and began an all game shooting duel with the Deredeo. Elsewhere the hammer Lord made tough work out of a badly wounded Contemptor, before finally killing it and dying in the explosion. The game went on to turn 7 (and only took a bit over an hour), and the Hydra's Reach finished several points in the lead after auto-cannoning my remaining dreadnoughts, but failing to finish off the last Obliterator. The Fractured Truth were defeated, but perhaps that was the plan all along...


Anyway, it was a great day. It was great to catch up with plenty of 'internet friends' and generally be part of this great community the DZTV crew have built up. Hopefully I can do it again next year!
Posted by Redtoof at 21:18