Adeptus Titanicus - The Battle for Gate 7

Back with some Adeptus Titanicus with The Claw (the_claw_74 on Instagram, do him a follow), and a fun narrative type game. The traitor forces of the Warmaster clash over a huge underground facility, the Proditor Manufactorum, on Esteban V in the Ultima Segmentum (not to be confused with Estaban III, home of the Legio Tempestus). Away from the front lines, Legio Magna lay claim to their recently conquered territory, but Legio Mortis demand the prize be ceded to them on grounds of seniority. Inevitably the titans walk, and the fate of Proditor Manufactorum will be decided at Gate 7. 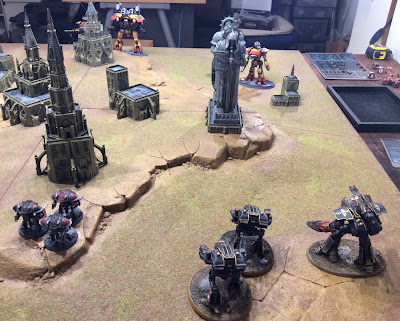 So with the narrative determined, we built our forces and decided on the mission rules. We decided on 'a bit more than 1000 points' and both ended around 1085. As the Legio Mortis attackers, I took a fast moving, aggressive force with a Janissary maniple of two Warhounds and the new Reaver, with two banners of Questoris knights (one mine, one borrowed). The Legio Magna forces consisted of a Fortis maniple, with two Reavers and a Warlord. He definitely had more big guns than me, but I was hoping my speed would let me use the terrain and get outside of firing arcs. 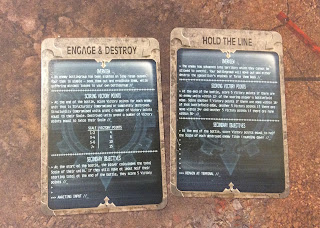 Having not played much Titanicus recently (or at all), we kept it simple, with 5 turns, 12 inch deployment zones and an appropriate mission card each. As the attacker I selected Engage and Destroy, while The Claw picked Hold the Line, appropriately. 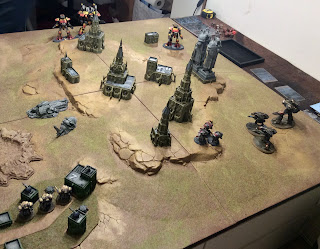 Titans on the table. I opted to overload the right flank, facing off against a melee Reaver, hoping my knights could march up the middle and draw some fire from the big guns at the back. Thanks to the raised centre of the board the terrain would prove to be quite effective at blocking line of sight. 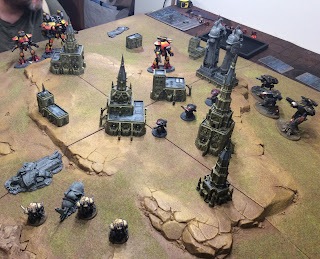 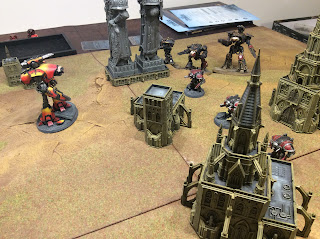 In turn one Magna's big guns stayed back, while the melee Reaver charged up the middle. I moved my titans cagily around terrain to avoid most of the firepower. It proved effective as there was very minimal damage on the right flank. 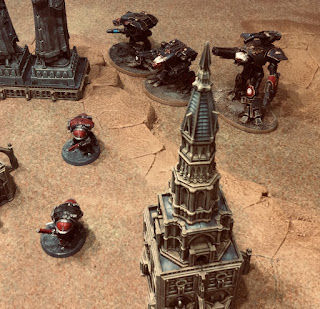 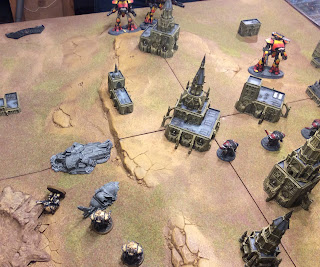 With most of the firing solutions blocked, the first real shots in anger rang out from the Reaver's Gatling blaster and Volcano cannon, destroying one of my Knights. 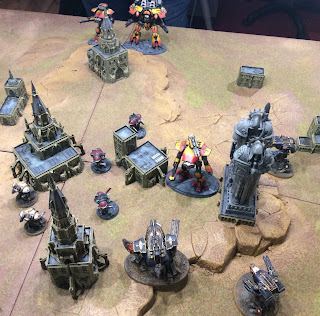 Turn 2 and the melee Reaver failed a command check to Charge, instead moving forward right into all my guns. The Claw later said this was a big mistake, which it probably was, but I countered by moving my Reaver right into a clean firing arc of the Warlord. 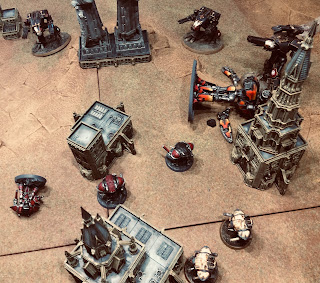 ENGINE KILL! Combined fire from the Knights and Vulcan/Turbo laser Warhound stripped the shields, before the Inferno/Plasma Warhound picked up the kill with shots to the back. My Reaver didn't even get to fire it's Melta cannon. It did however get absolutely lit up by the Warlord, putting critical damage on the body and causing the reactor to run hot after pushing the void shields. 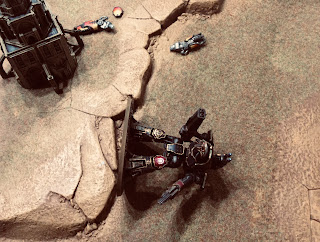 New Model Syndrome in full effect in turn 3 when the Reaver fell to it's own overheating plasma reactor.

Elsewhere though turn 3 was for manoeuvring, with Knights and Warhounds using the Full Stride order to get out of Firing Arcs. One of the banners wasn't able to get that far though and got the full firepower of the Warlord at close range, but miraculously the Lord Scion survived. 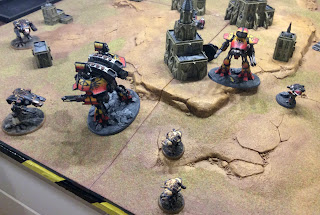 Turn 4 was all about moving in for the kill. I had initiative so I was able to do damage first, but with no more table to run to, I wasn't able to completely avoid the Warlord. The Knights danced around the Reaver, while the Warhounds did their thing, the Vulcan Mega Bolter unleashing an absolute storm of fire, stripping 4 void shields off by itself, then finishing the job with the Turbo laser. The Plasma blastgun then put some serious hurt in on the mighty engine. To rub salt in the wounds, the Warlord was unable to strip the shields from the closest Warhound! 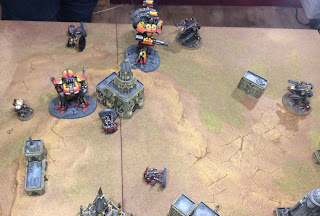 The Reaver did finally kill off one of the Knight banners, but the Warlord was weakened, and the game would probably be decided based on if the Warhounds could kill it or if it would destroy one of them. 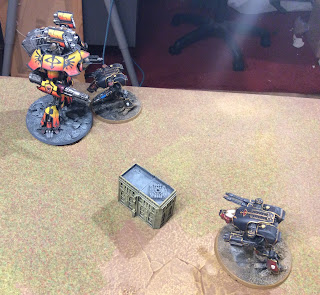 In turn 5, First Fire orders on the Warhounds caused further damage, while the Warlord got unlucky again in failing to reignite it's Void Shields (even with Emergency Repairs). It's machine spirit was clearly upset, as it woke up while attempting to fire the Volcano Cannon, and caused the engine to stomp forward and smash into my Warhound instead. 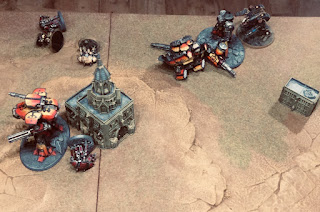 Finally the Warhounds fired again, the Plasma/Inferno gun taking a chunk of damage from the legs, and then eventually the Vulcan Mega Bolter securing the ENGINE KILL with called shots to the kneecaps. A magazine detonation later and my last Knight was destroyed, but with both Warhounds standing right in the Legio Magna side of the board, this one ended as a convincing victory for Legio Mortis! 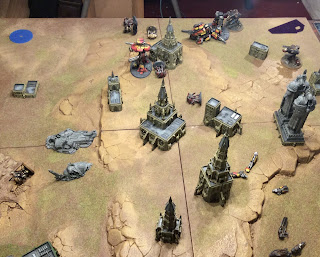 So there we have it. Gate 7 falls, and Legio Mortis now lays claim to the Proditor Manufactorum. I feel like we are starting to get our eyes in a bit for the rules, and with the game flowing a little more smoothly, Titanicus is absolutely a blast. We both had a great game, though we made mistakes, I feel lessons were learned. I'd like to claim tactical genius, but I definitely got very lucky in this game, with The Claw's Warlord Titan particularly unlucky to fail several command checks, repair rolls and loads of void shield saves at first time of asking, and my rolling was pretty hot (overheating pun unintended.)

No doubt we will one day return to this place, and Legio Magna will be out for revenge...