As you may well know by now (or have guessed from the title), I attended the Warhammer 40,000 Grand Tournament at Warhammer World recently. I took my AdMech and Knights (list can be found here) and had a great time! I was intending to write a longer battle report for each game, but I didn't stop to take as many pictures as I should have, and I've already started to forget some details, so I'm doing a post for each of the two days instead, with a shorter summary report of each battle.

In case anyone is a new reader here and doesn't know - I'm not captain competitive. I love playing 40k and I like to think I'm pretty experienced at the game in general, but I'm not a meta chaser and I'll always default to taking units that look cool or are fun over the most optimal ones. I built a list that I thought was reasonably tough, but I had no intention of going for the top tables. Realistically I was aiming for 2 or 3 wins out of 5 games to consider it a 'successful' event.

First game was against Dave, who brought a pure Dark Eldar list. He had a battalion of Archons, Warriors in Venoms and two Ravagers with the ignore cover trait, a vanguard of Urien and three units of two Talos with 4+ invulnerables and a Wych flyer wing with two Razorwings and a Voidraven who got +1 to wound against things with 10+ wounds. It was an interesting list with a bit of everything, and no annoying Vect stratagem. The mission was Scorched Earth. 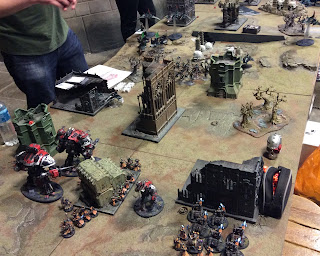 We deployed on the short edges, and I held back a little back, wary of a long bomb turn 1 Talos charge. Dave went first, and his flyers immediately screamed across the board. He also go forward with Talos and Venoms to hold the central objectives on his turn 2. 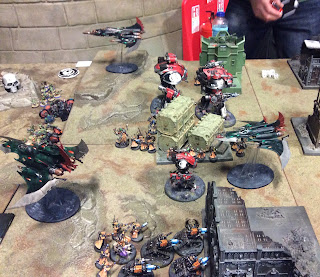 The turn 1 shooting was a bit of a whiff. The Knights came out largely unscathed, and my infantry were passing enough saves to make them annoying. The destroyers took a lot of firepower, but only two of them died. 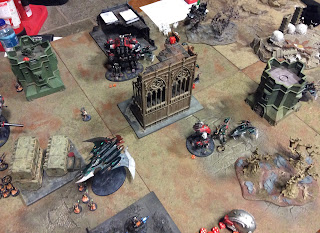 In my turn I split fire all over the shop, destroying a Ravager and a Talos and putting a lot of damage onto the planes (I forget if I downed one this turn). However I didn't do enough to shift the Drukhari off the objectives, including with charges from the Valiant and the Armiger, so Dave started turn 2 with a lead. 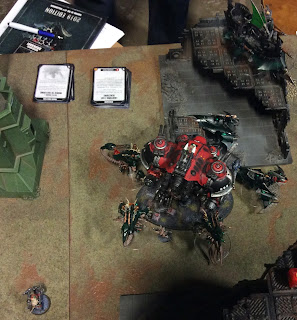 Charging Lady Helena in the Valiant forward was a big mistake! Dave was able to wrap around her to stop her escaping, and stop me shooting him off the objective. Knights can walk over infantry, but not monsters. There were then many turns of ineffectual stomping and Talos attacks. 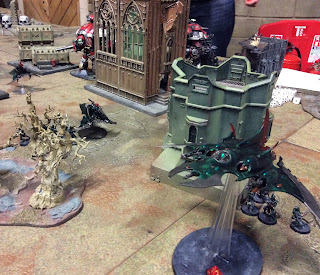 Elsewhere my infantry were getting cleared off the table, but Lord Camulus in the Crusader was doing good blasting Venoms and flyers out of the sky. 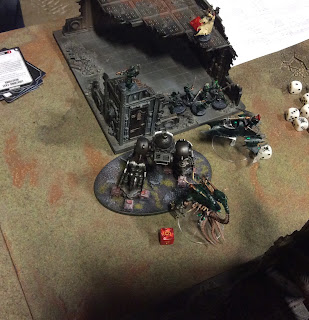 Eventually the Valiant was destroyed, and exploded, taking out a lot of Dark Eldar, including a Venom, which then exploded itself and killed some more. In the latter turns I was left with just the Crusader, but the battle cannon and avenger Gatling cannon were proving effective at splitting fire, and by turn 6 I had cleared everything off the board aside from a cowering Archon (the warlord). I'd killed a lot, but Dave had wracked (get it?) up the points and was comfortably ahead at the end.

A good game full of fun moments and a good opponent. Dave said this was his first tournament, so I wished him luck for the rest of the event. He played well and had a nice list, and I'm not sure where he ended up overall, but after day one he'd got 3 wins under his belt. I think we played this game in a good spirit (we resolved a couple of possible disputes with the classic 4+ method) and it set a great tone for the weekend.

Game two was against John with a stunning Dark Angels army, that eventually was nominated for best painted. He has some really beautiful freehand work depicting the face of a lion on the three Repulsors and Leviathan. Oh, and he had three Repulsors and a Leviathan. Gulp. The list was rounded out with scouts, two units of intercessors, Azreal and a couple of lieutenants. The mission was four pillars, but it hardly mattered. John commented at the start that whoever got first turn was going to win, and I was inclined to agree with him. With the corners deployment zones, there was limited line of sight blocking terrain, so no real way to hide our big guns. 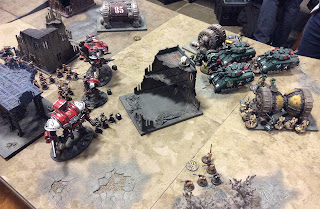 John got to deploy first and built a shooty castle. I pushed the Knights up as far as possible and hid the Destroyers as best as possible (which wasn't very well) and hoped to seize. I did not. 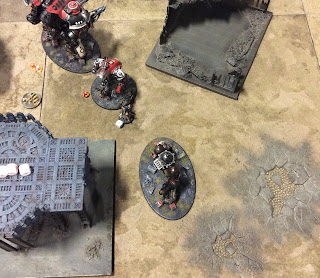 Splitting fire between the Crusader and my infantry, the Repulsors were deadly, while the Leviathan moved up and gutted the Destroyer unit with it's storm cannons. Some extra bad luck on top for me as the Crusader exploded, killing off several depleted units and being unable to get back up. I think the Dark Angels had killed off seven of my units. John felt guilty and bought me a pint after that. 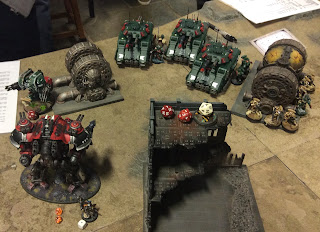 So on my turn one it basically became Lady Helena vs the world. I continued, trying some long shots to claw back points, including trying to kill all the troops to get the 'hold more' objective with my one remaining Destroyer and nuking Azrael with a Shieldbreaker missile. Neither gamble worked, and to add salt to the wounds, the Valiant was unable to destroy the Leviathan (the half damage stratagem saving it from 5 wounds from the Thundercoil Harpoon.)

With no real chance at the game, the Valiant managed to show some fight (Lady Helena's mount is not known as the Defiant Flame for nothing) and survived a full shooting phase from all the Repulsors. 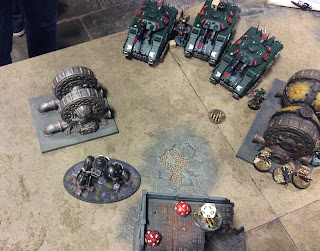 The mighty machine did eventually fall (I think to overwatch from a Repulsor) and promptly exploded, finally killing off the Leviathan, and that was that.

It was a bit of a one sided game, sadly, but it was fun nonetheless with Knights exploding and some heroics in the face of certain defeat. Also gave me a lot of time before the next game to complete the Instagram phase.

The final game of the day was against Blood Angels, and a nice man who's name completely escapes me. (If you are reading this, I'm sorry! Please correct me in the comments!) His list was all infantry, with a high number of jump packs and literally half his army starting off the board. He had a couple of Intercessor squads, scouts, two Devastator squads, two Assault squads with meltas, a classic smash Captain, an assortment of buffing characters with jump packs, a 6 man Inceptor squad (jumpy dudes) and two units of 10 Vanguard Veterans all with power axes and storm shields (and a thunder hammer on the sergeant). We played Ascension, and I got first turn. 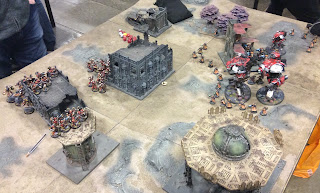 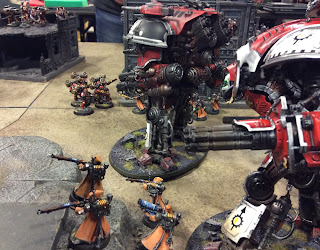 After turn two I'd killed most of his board presence without too many losses. His turn 1 was never going to be impressive, but he got unlucky with the firepower he did have. After my turn two I think he had the Inceptors and a squad of scouts left on the board, and I had plonked an Enginseer on the central objective to start building up the points. However, in his turn two the battle changed significantly... 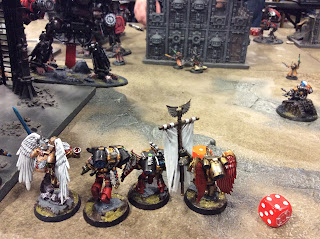 I'd managed to screen out his larger units from my back lines, but the characters had found a gap behind my Crusader, the warlord, and were eyeing up the charge. The Vanguard Vets jumped in, one unit murdering some Skitarii and the other charging the Valiant from around a building to avoid the overwatch. The Inceptors stripped wounds off the Armiger and charged it. A bunch of characters made it in to Camulus in the Crusader, including the smash captain. With all the buffs, they managed to reduce the Crusader down to a few wounds (possibly just one), but didn't quite take it down. The Valiant also lost a chunk of wounds but was still fighting at full effectiveness.

In my turn it was panic mode. Time to kill as much as possible. Knights stepped back and opened fire. Storm shields were good though, I think I killed 4 Vanguard from one unit and wounded several of the characters. The captain was on one wound! I'd have to charge him... The Destroyers charged up with the servitor maniple stratagem and killed 8 Vanguard from the other unit, making that flank feel a bit safer.

In combat the warlord stomped on the Smash Captain, but I think was destroyed by one of the other characters, causing an explosion that killed them all! 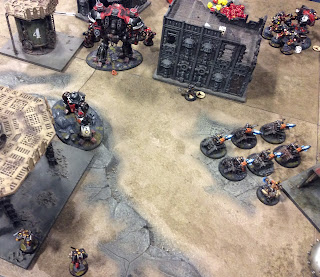 It was a bloodbath around the board, but that Enginseer was still scoring points. The Blood angels managed to kill off the Armiger and the Destroyers (mostly due to the Inceptors), leaving me with the Valiant and a smattering of characters and infantry, but eventually it was enough to hold the objectives and kill off the remaining units (apart from the scouts hiding in a ruin all game). In the end it was a comfortable, though bloody victory for the Knights of Taranis and their Ryza allies.

Another fun game and a good way to round out the day with a win. The Blood Angels were really scary, but they didn't quite have the staying power to really threaten me on the points. It was also another lovely army with a lot of old school-style black and yellow markings on them, which was cool. I left Warhammer World at the end of the day feeling tired, but happy. I'd gotten the one win to pretty much ensure I wasn't dead last, and one more win in the next day would see me happily into 'somewhere in the middle' territory.
Posted by Redtoof at 16:42