It's been relatively quiet on the blog front recently (I've got a few things going on, but nothing that's ready to post as an article yet), but yesterday I got out to Grim Dice to play some 40k! I took the Genestealer Cult out for a spin as a bit of a learning experience. They are still a 'new' army for me (last game, and only previous game with the 8th edition codex with them was back in July against Stig) and my opponent John hasn't played against them with the 'new' codex either. He's practising for the Warhammer World GT soon, so he took a variant of the list he's looking at. My list is pretty much just all the GSC I have, so not really optimised, but I thought it would be a good information gathering experience for both of us.

We played the Eternal War mission Lockdown from Chapter Approved 2019, which features 6 objectives, 4 of which disappear over the course of the game. I like this mission because it forces you to play for the objectives early. We were also using the ruins rules they play at the Warhammer World GTs, which are 'ITC lite' - effectively the windows and doors on the ground floor block line of sight, but not sections that lack a wall entirely. We were playing at 2000 points.

My list was a double battalion (ah, buddalion), using the Cult of the Four Armed Emperor rules. I don't own the Psychic Awakening book for GSC, so didn't use any of the rules from that book. (Apparently it is underwhelming - which was good for my wallet). A large chunk of my list doesn't benefit from cult rules so the choice was as much about the stratagem and warlord trait as it was about the +1 to charge. I spent a CP at the start on Brood Coven to get a bonus couple of warlord traits, getting 2 back for the Cult one. I've also left the psychic powers off this list below, I took one of everything spread out through all the psykers.


John's list was supposed to have 2 Deredeo dreadnoughts in it, but they somehow didn't make it into his case, so they were substituted out for a Knight with two thermal cannons (the melee weapons were proxies - it was better this than two coke-can dreads!) I think this left him with a double battalion and a super heavy auxiliary. He was using a bunch of stuff from Faith and Fury for his Emperor's Children, so forgive me, I don't remember what the relics and warlord traits were.


I won the roll to choose to be the attacker, which was a tough choice because I didn't want to face two turns of noise marine fire before my heavy hitters turned up, but there is also a bonus point for holding the most objectives at the end of the battle round. In the end I opted to go first, and deployed a bunch of blip tokens. John hid some of his army behind ruins, but left a blob of noise marines out in the open. We both had a permanent objective in our corners, while the others were going to disappear on their numbered turn. 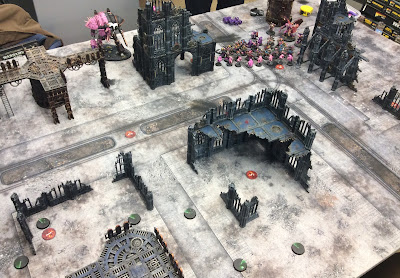 In turn one I plopped down the tanks, some characters and two neophyte units (I had one with shotguns still underground). The Chaos priests got chanting to give the noise marines +1 to hit and -1 to be hit in the shooting phase. As a result my fire was split between some shots at the Knight to no effect and some guns at a cultist unit to get first strike - which I just about managed after a failed morale test. 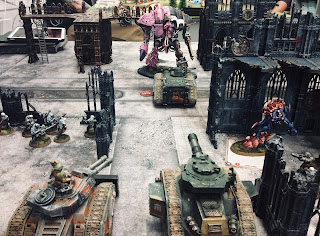 I also pushed the Chimera full of brood brothers up onto the objective near the knight, as it was going to be removed on turn 2. Unsurprisingly the Knight wandered up to respond and try to take it. 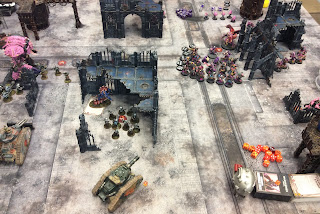 Bit of shuffling and the shooting commenced. Only one unit of noise marines in range, but buffed up with stratagems they split fire and destroyed the Chimera and dropped the Battle cannon Leman Russ to 3 wounds in one volley. The Knight blasted the Vanquisher Russ into scrap, removing it's chance to prove why it's the worst main gun. John tried to play Endless Cacophony to finish my Russ and cut through the Brood Brothers on the objective by the Knight, but I used the Cult stratagem A Plan Generations in the Making to cancel it. The Knight then charged the Brood Brothers, but left a few of them alive, holding the objective and within 6 inches of a Patriarch so they couldn't fail morale. Thanks to that we both held 3 objectives and scored First Strike. Neck and neck! 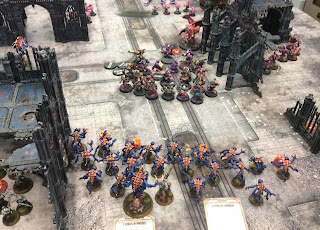 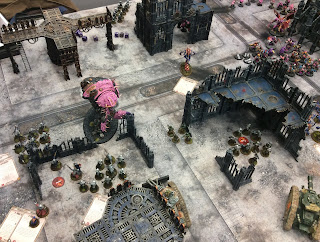 Turn two was always going to be critical. The GSC sprung from their ambush positions, striking at key targets. Demo charge Acolytes used stratagems to pop up right next to the Knight and throw all their charges at it. Along with fire from the tanks and some cheeky wounds from autopistols, the Knight fell. 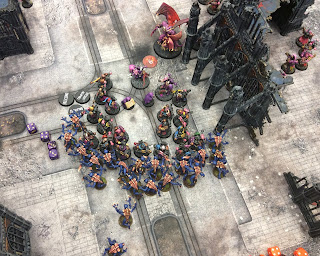 On the other side of the battlefield 20 Genestealers emerged from a Perfect Ambush, giving them a 6 inch charge on the Noise Marines. The warlord Patriarch popped up next to them to grant the +1 to hit buff and cast Mass Hypnosis on them to ignore overwatch. The Kelermorph appeared as well within 12 of one of the Dark Apostles and blasted him full of holes. The Genestealers went in and unsurprisingly murdered most of the unit (some kept alive by having toughness 5 from combat drugs), and causing the rest to flee. They did kill 8 of the Purestrains in return/as they died though. Overall a great turn, but one disappointment was a failed charge from the other Patriarch and the shotgun Neophytes into a cultist squad on objective 3. This meant I was holding 2 objectives now vs John's 3, which would be worth 4 points to him, putting him in the lead. 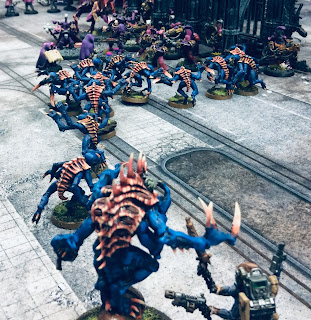 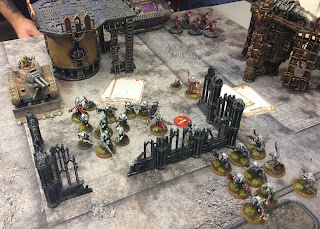 The second blob of Noise Marines emerged from the ruins, and speaking of hiding underground, the Termite drilled up behind my lines disgorging the chaincannon Havocs. To no one's surprise, both units polished off their primary targets - neophytes on my home objective, the Genestealers and the damaged Leman Russ. Endless Cacophony was played now the screen was dead to target my characters, killing the Kelermorph, but surprisingly only wounding the Warlord. 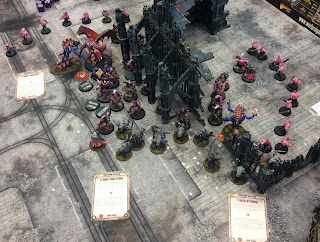 In my turn the last of the Acolytes and the Primus emerged. My remaining guns managed to crack the Termite (which had charged a Magus and succeeded in only killing the familiar) and kill a few of the Havocs, but two chaincannons were still going to cause problems! I tried to mind control one of them to kill his mates, but failed the leadership roll. I also failed to cast Mass Hypnosis, which was a problem because the Emperor's children can otherwise strike first, so my second Patriarch who had lined up a charge on the Daemon Prince was getting very nervous! 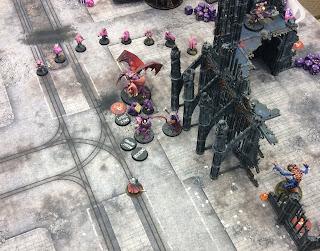 The Acolytes, Primus and Patriarch charged into the Noise Marines and the Cultists on objective 4, and thanks to numerous buffs, killed all of them (aside from a few noise marines who ran away). The Prince obviously fought second, smashing the Patriarch. This gave me objective 4, though not for long. In John's turn the Prince and characters squashed the warlord and Primus with ease. The remaining Havocs did some good work clearing out more of my backfield and charging the Iconward, who killed one of them in combat, but the last one contested my home objective, earning John the bonus point again. 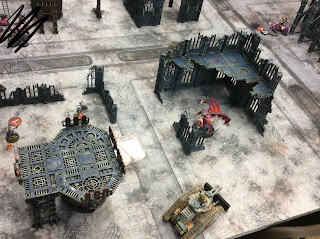 In the last rounds of the game all of my units in John's half were cleaned up by his characters camping on his home objective, while I finished off his Havoc. The Prince Warptimed his way up to kill off my last Neophytes on objective 5 to grab it before it disappeared. The last Leman Russ turned it's turret and autocannoned the Prince to death, getting me warlord. At the end of turn 6 the dead pile was hilariously large, and we were both down the a few stragglers on our home objectives. The game ended, with John on 17 points to my 15.

Wow, that was intense. Playing Genestealer Cults requires a lot of thinking! That game was a proper punch, counter punch game, ending in a bloodbath. Valuable experience for both of us I think. Two points in it, ultimately down to going second really to push me off objectives and get the 'hold more' points. I'm not sure choosing to go second would have been a better move for me, though there are a fair few places where I think a bit of luck either way would have really swung it. I was quite pleased with how the army worked, given that a lot of the choices were probably not conventional GSC wisdom (e.g. Leman Russ tanks and Purestrain Genestealers), and I'll definitely look to get them on the table again, possibly as Tyranid allies, we'll see.