Welcome back to the 40k Grand Tournament report, as we move onto day two. Day one is here, and my list is here. The Adeptus Mechanicus of Ryza and Taranis Imperial Knights continue on their quest to not be completely embarrassed in a relatively competitive setting, coming off two defeats and a victory in their recent encounters.

Game four was against Wayne with Chaos Knights. I forget most of the traitor names, but he had three 'crusaders', a 'preceptor' and one of each Armiger. They had a whole load of special rules that I largely forgot during the game, but there was a 4+ invulnerable one, one with a load of 'Freeblade' type rules and they all had +1 to hit in melee on the first round. The mission was Lockdown, and we had the corners deployment. 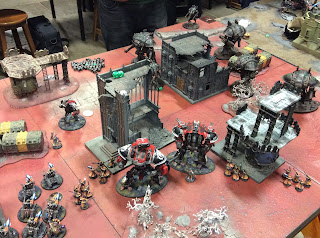 I took first turn, but Wayne was canny enough to deploy out of range of my Destroyers and the Valiant, so it was largely a turn of moving and some ineffectual fire from the Crusader. I did get my infantry out onto plenty of objectives which would put me ahead on points early on. 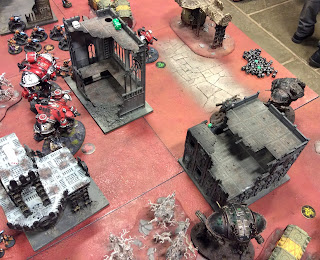 The Chaos Knights moved up to respond and opened fire. The Helverin and the big laser on the Desecrator (I think) melted most of the Destroyers, but the rest of the fire was fairly ineffectively poured into the Valiant. Lady Helena stood tall and her mount, The Defiant Flame, once again lived up to it's name. 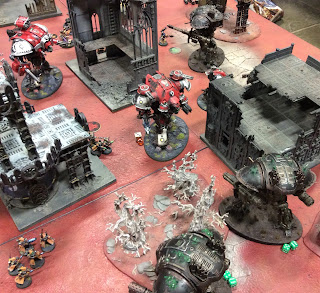 Speaking of flames, Helena charged forward and started spreading fire across the front rank of Traitor Knights, not killing any of them but reducing two below half wounds. Thanks to the Valiant soaking all the fire, I still had plenty of infantry to hold objectives and go further ahead on points.

In Wayne's turn, I got another stroke of luck as the Despoiler failed it's 'freeblade' leadership test (in spite of a CP reroll), forcing it to charge the closest target and be hitting on 6s with shooting. Elsewhere shooting did some damage but my knights were still standing. At the end of turn 2 the first full unit finally died as the Despoiler turbo-murdered a tech-priest Enginseer on an objective.

More Knight action in my turn, the Valiant and Crusader did some mopping up on the two damaged 'Crusaders', killing both (including one with the Thundercoil Harpoon!) My Armiger also did good, killing it's evil twin Warglaive. At this point I was way ahead on points so Wayne went for killing stuff... 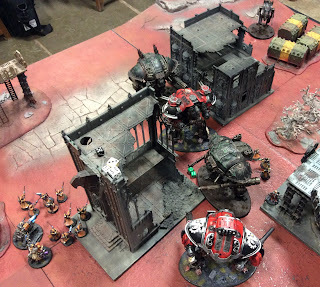 The Armiger got sliced in half by the Despoiler (it did 30 wounds!), and some shooting did some serious damage to my big knights. I forget the exact details but I think the Valiant fell and got back up again, and then at some point there was a big explosion. As you can see there was a big pile of knights in the middle!

Eventually my forces cleared up the table, earning me a convincing win. This was a real fun, if short game. Wayne's big robots looked proper evil, and I enjoyed seeing some of their fun weird rules. Having infantry and loads of command points definitely gave me the edge in this scenario, but I also got a good chunk of luck with Helena's heroics. This also gave me two wins which means I was pretty satisfied no matter what happened next. (And I was even more satisfied after a cheeky carvery for lunch!)

Game 5 was against Andrew and more Knights! This time Imperial, using Hawkshroud, and bringing a Valiant! (#rightdominus). He took the Valiant, (with Ion Bulwark and the Traitor's Pyre, naturally), a Gallant, two Crusaders and Inquisitor Greyfax. Andrew was 'fresh' off the LVO the previous weekend, so he was bringing a jet lag friendly list. The mission was Crusade and we had the quartered deployment zone again. 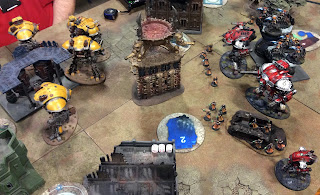 Andrew was due to go first, and he told me he'd been seized on three times already. So of course I seized the initiative. This was really good for me because I had nowhere to hide my Destroyers and I was sure they weren't going to survive first turn. I immediately powered them up and knocked 18 wounds off a Crusader. Elsewhere my Knights did a chunk of damage off the Gallant. I think I got a little unlucky not to kill either of these targets. I chose not to shoot the Valiant, mainly because I thought it'd be really cool to have a Valiant fight! I also pushed out to grab several objectives for the next turn. 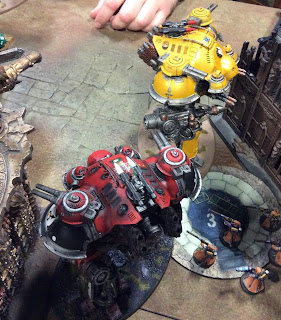 The Hawkshroud Knights did more or less as expected, and mostly deleted the Destroyers. I lost a fair few infantry but the Skitarii held firm on several objectives. Greyfax used a psychic power to give my Valiant -1 to hit for the turn. Then the charge phase, the fully operational Crusader charged the Armiger (finishing it off from shooting), and the Gallant used the large, line of sight blocking terrain piece in the center of the board to charge the Valiant without taking overwatch! 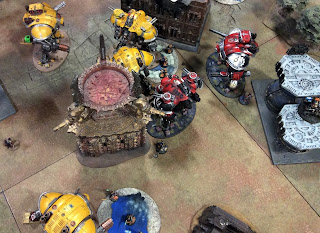 I believe Helena fell once again, but I played 'Our Darkest Hour' and she got back up. In my turn with Machine Spirit Resurgent she was fighting on the top profile, but at -1 from the pesky Inquisitor. My Knights killed off the Gallant and the wounded Crusader, but that left the other two knights largely untouched.

In Andrew's following turn Helena was finally brought down, and Camulus, in the Crusader, suffered damage. He also put a lot of fire into my infantry, blasting me off objectives and giving himself a probable lead at the start of his next turn. With my assets greatly diminished, I had to kill off at least one Knight in my turn to stand a chance. Camulus blasted the Crusader, damaging it significantly. Then I charged, but Andrew had saved enough CP to use the Hawkshroud stratagem and overwatch with the Valiant. The flamer reduced my Crusader to 10 wounds, then the Thundercoil Harpoon hit! 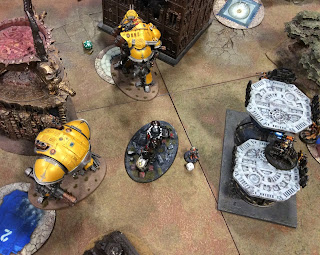 A wound and a failed save, and the Crusader was destroyed! I had two CP left and not much else, so I made it explode! With nothing really to speak of left, we talked out the last few turns, I had a chance to try and finish off the Crusader with my Tech-priests' Eradication rays, but it was not to be. Victory for Hawkshroud, a loss for the forces of the Omnissiah.

Another fun but quick game, played in absolutely the right spirit. Knights do tend to produce a lot of epic moments, but they are very swingy it seems. Andrew was convinced I'd take it after I seized, but I sure proved him wrong! I think if I'd been 4/0 at the start of this game I'd have prioritised killing the Gallant and then the Valiant, and probably held back a bit more with my Knights as well, but we both really wanted to see Valiants do cool stuff, and they did! I'd witnessed two knights killed by Thundercoil Harpoons in one day, so I was pretty happy with that! That said, with two short games on day 2 I did slightly regret taking a low model count army. With the three hour rounds I definitely could have played something with a lot more models and got more 40k for my money!

So in the end, 2 wins and 3 losses, I think is a respectable return. Fairly happy with how my army performed, most of it did more or less as expected. Overall I came somewhere in the 70s out of 91 players, which I was a little disappointed about, because I'd not picked up any favourite game votes. I think all my games were fun and my opponents all seemed to have a laugh, so I can only assume that it's an indication of the overall quality of games at the weekend that each of my opponents had other, even more fun games. I certainly didn't hear much of any of the sort of behaviour favourite game votes are supposed to stop, so I guess it did it's job even if I didn't directly benefit in the rankings.

More importantly of course I had a great time. It was a real fulfilling hobby experience, with five great opponents, lots of awesome armies on display, meeting up with some discord folks, chatting with other gamers and even an overall tournament victory for an Ork army! WAAAAGH! Even if you are only a tiny little bit competitive, like me, I definitely recommend the Warhammer World tournaments. Everyone I spoke to had a great time and it was just an awesome friendly atmosphere. It really felt like we were all there to have a good time, not just to win.
Posted by Redtoof at 11:11