As I have been saying to anyone who will listen, I'm off to the GT Heat 1 at Warhammer World next weekend! I'm quite excited about it, even though I fully expect to spend most of my time around the bottom tables, it should be a fun weekend out with plenty of 40k in it. So, having finished off the last models I need and packed the army into it's case, I thought I'd write this 'preview' post with my list and some ruminations.

My most recent tournament experience went pretty well with the Alpha Legion, but I suspect the GT will be a bit of a step up, so I've put together a list that I think is a bit meaner. It's built around the list I took to the Element Games Grand Slam back in 2018, but focusing more on the Knights rather than the AdMech, and with more command points (though less robots). This means, at the very least, I kind of know what I'm doing with it. They are also probably my prettiest army (potato photography aside) so might get me some soft score favours there. 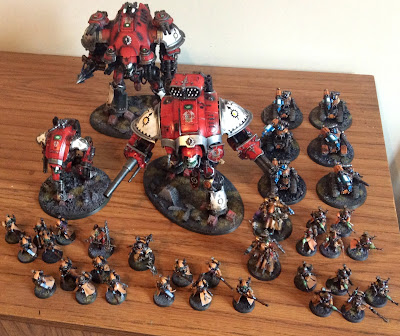 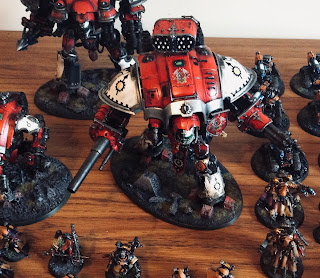 So there you have it. Is it fully optimised? No, not at all. But is it about the hardest list I can make with my collection? Probably. I stretched to getting an extra box of Skitarii to allow for the double battalion (baddalion), but I didn't fancy scouring ebay for Daedalosus or a Manipulus to buff the Kataphrons or getting a Helverin or even a Castellan. (We all know the Valiant is the right Dominus!) I'm fairly happy that with two big knights and the Destroyer blob I've got the punch to at least make a game of it against most opponents. I can't imagine I'll catch anyone off guard with them, but thanks to the ITC style ruin rules they use at the GT these days, the Destroyers should be able to hide to allow them to spring out and get one good volley off, boosted by the Ryza and the Servitor Maniple stratagems, they will be +1 to hit, wound and damage, which should hurt! I'm also hoping with my decent supply of CP I can get some good use out of the Knight stratagems, a knight getting back up from the dead can definitely change a game.

Anyway, whatever happens, it should be a bit of a laugh. I've already ticked off a good chunk of my essential tournament preparation list, ahead of schedule. Warhammer World usually put on a good event, with a good standard of armies and players, and I haven't been to one in ages, so again, I'm excited!
Posted by Redtoof at 21:13