Hello!
This one is a bit... weird. Some of you may have seen some miniatures and artwork for 'Turnip28' popping up around the internet, and may have wondered what it is. The simple answer is "It's about turnips", but the slightly longer answer is that it is a wargame/setting being developed by Max FitzGerald, in which a root-based apocalypse has ruined everything and now humanity is forced to rely on sinister vegetables and rusty pre-1800s equipment to wage war on each other in endless muddy battlefields. I think.
Anyway, I was immediately struck with the grim, dark, muddiness of all this. Those that know me might know that I love painting rust and dirt and generally being messy with my minis, and I also love Mordheim, the old Warhammer skirmish game that had such a great atmosphere and is probably to this day my favourite book GW have released. As it turns out, Max was one of the artists involved in Mordheim, hence the similarity in style, and that was good enough for me to jump up. So I got a few sprues (Perry Miniatures' Foot Knights and French Napoleonic Infantry) off ebay and stuck some bits together and got these: 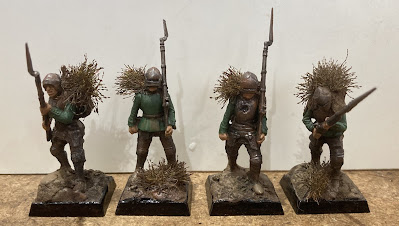 I'm fairly happy that I've captured the essence of the setting and artwork in my style and with some fairly basic conversion work. Here's a quick rundown of how I got this, partially for my own benefit when I get some more and wonder how I did it the first time. Firstly, here's the paint I used and some of the extra 'bits': 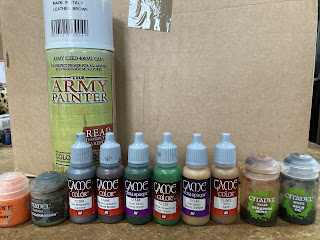 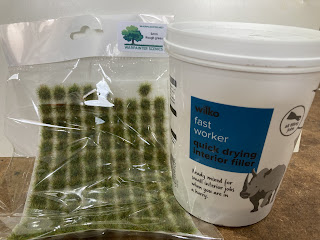 The minis were first assembled using the legs/bodies and heads of the knights plus the arms and backpacks of the Napoleonics, with greenstuff haphazardly covered with the filler for mud on the bases and over the back/shoulders. Then tufts were chopped up and added liberally. These guys have a lot of roots with them! 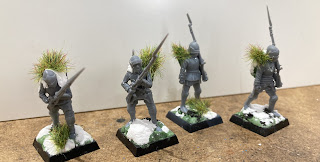 Next stage was to spray them all brown. I thought this would be a good starting point for all the mud and rust. It also had the effect of catching in the tufts to create a more dishevelled, rooty look. 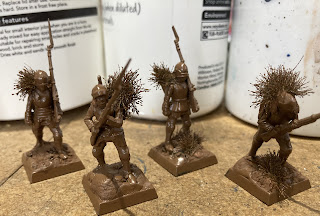 Then of course, painting! Started by slapping on some Ryza Rust over the armour sections, then Typhus Corrosion over the mud and anything anywhere close to mud (so pretty much the whole model). After that dried, the metal sections got a drybrush, followed by a tidy up with a darker brown for stock of the gun, backpack, belts etc, and painting the green for their 'uniforms'. I used the heavy flesh for a nice grubby skin tone, also drybrushing the root/mud, and following up with another heavy drubrush of Earth. Washes over skin and mud with sepia and the metal with black led to the final touches of black around the edge of the base and in some gaps in the armour (noticeably the giant hole in one of the chest plates) and a quick highlight layer on the skin. And that's pretty much that: 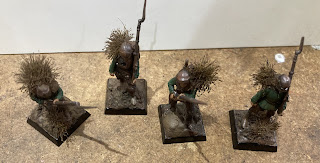 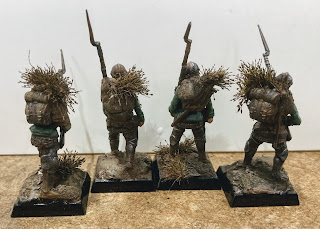 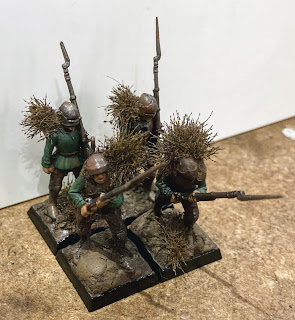 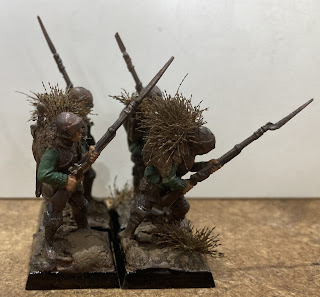 Again, I'm happy with how they came out. I decided to go for a more heavily armoured look than some, reasoning that my regiment would be savvy scavengers, picking up armour and equipment from fallen foes as well as dredging it out of the fertile mud of their coastal home town. With this in mind I named them the 69th Mordby Mudcrabs. Now I just need to make more of them... 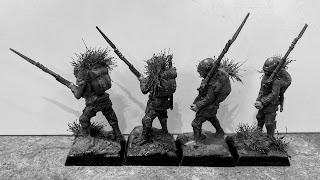 Hope you enjoyed this little look into madness, stay safe out there!
Posted by Redtoof at 13:57