Hello!
Since it is Orktober, I thought I should paint something Orky, however, thanks to the big Ork Project of last year, I didn't actually have any unpainted Orks laying around, so I borrowed something. I offered to paint a Burna Bomma for one of the other DZTV patrons, and asked if there was any particular scheme he was after. "Whatever you want." Right... 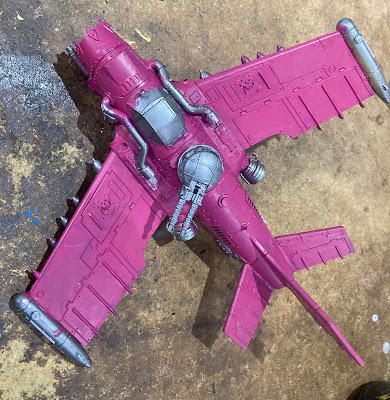 So obviously I started by painting it bright pink. A bit garish, but I did in fact have a plan, inspired by images of a pink Spitfire. 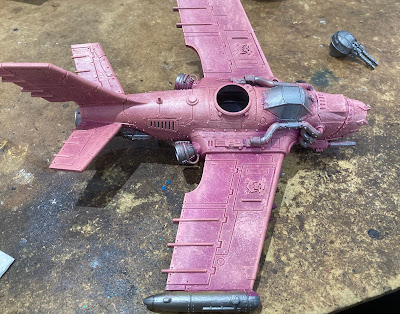 I mixed up some pink with a flesh tone and then some white to apply some heavy drybrushes and some messy stippling. I think it gave a good weathered/orky paint job look. 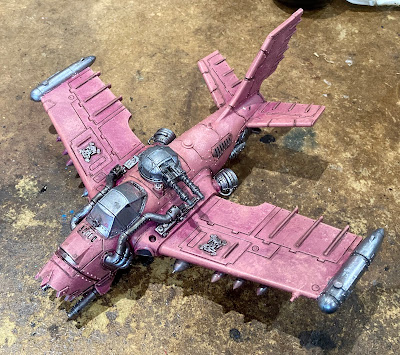 Next jobs were black lining all the gaps between the plates with nuln oil, and repainting all the metal bits - most of which got a dollop of nuln oil as well. 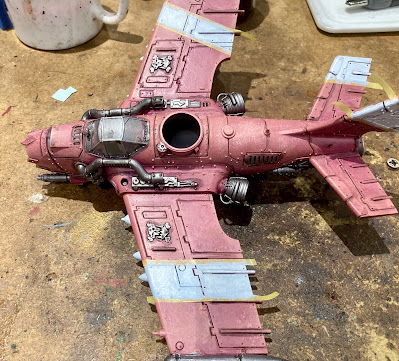 I decided that since the source material had some black and white stripes, this one should too. Being Orks, there wasn't going to be any logic behind it, just some decoration slapped randomly over the plane. Using some thin masking tape, I marked up some areas and painted on the white - starting grey and working up somewhat messily. While I was at it, the bombs and missiles got some white tips. 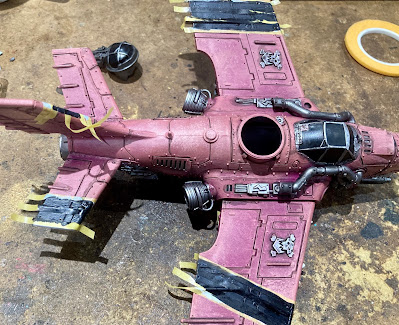 More tape and some black, with a bit of grey mixed in for a second coat. When the tape came off it was a bit messy - the surface of the bomma is not perfectly flat so the tape let a bit of paint spill over. No matter, Orks painted it. While I was at it, I hit the canopies with some black as well. 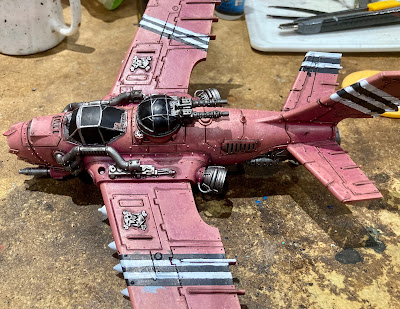 A bit of a tidy up and then on to some weathering... 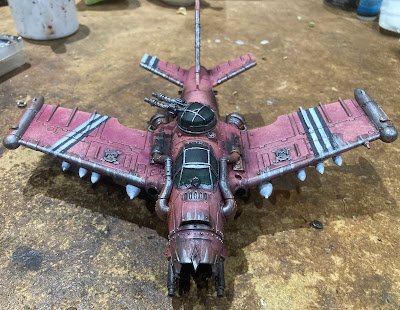 The fun bit! I slapped on some more metal, with streaks around the nose and the leading edges of the wings. Then some weathering powders, rust over some areas, and black smoke around the various exhaust ports and intakes. Then a little bit of green onto the canopy, and time for varnish. The whole thing got a matt spray, and the canopy got a a bit of gloss painted over. And that was that!
There will be an update somewhere down the line with the completed item, (which I'm glad to say, was well received by it's owner) or you can check out my instagram (red_toof) where I've posted some pics. Thanks for reading, stay safe out there.
Posted by Redtoof at 17:15