Hello!
Another Grim Dice 2000 point 40k tournament, the last with the Nachmund rules before we move over to Nephilim. Importantly all the big changes, points, balance dataslate and the new mission pack itself, were released after the two week cut off point for allowable publications for this event, so it really seemed rude not to use Tyranids...
That said, my collection doesn't contain the stuff that got hit the hardest so my list only went up by about 80 points after Battlescribe updated (I'd heard of people who lost about 400 points!). I modified the list I took last time (which went 3-0) to include some Carnifexes and Old One Eye after they proved brutal vs some Nurgle Daemons, and I upped the psychic potential with a Neurothrope and sprinkled the psychic powers about. 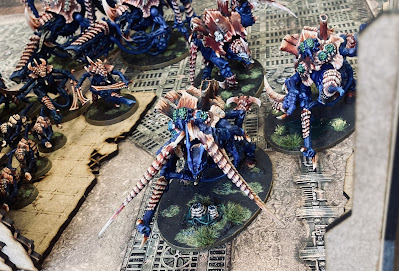 So as usual I'll give a quick summary of each game, then some overall thoughts at the end. First up was against Brad with Deathskull Orks. Brad was returning to 40k after some time away since about 5th edition, but had a fun and kind of scary list filled with loads of toys, and spending almost all the CP right off the bat. Three units of ten boyz were supported by Deffkoptas, Grot Tanks, Squighog Boyz, Trukks, two blobs of Meganobz and I think six fighty characters. The mission was The Scouring. 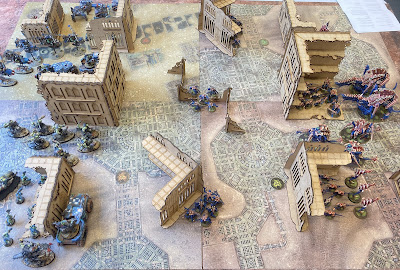 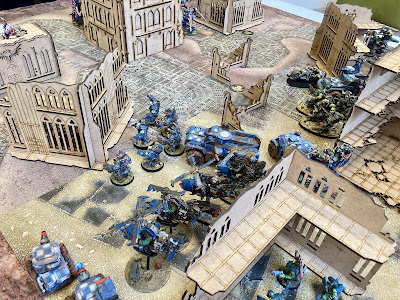 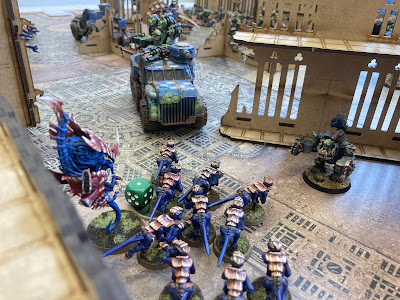 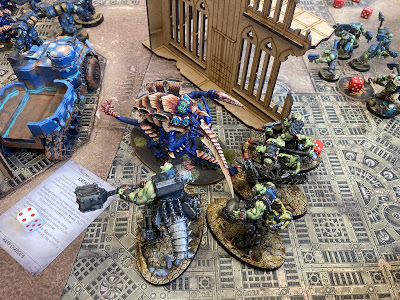 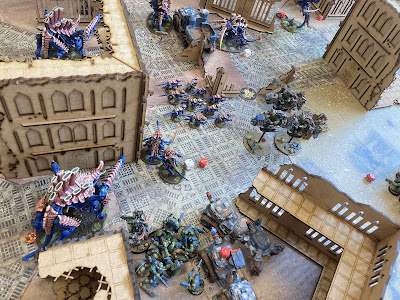 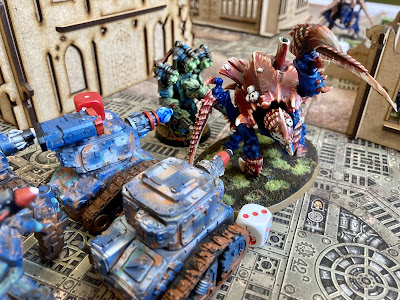 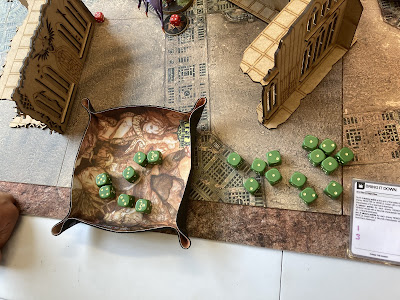 The Orks got first turn and rushed the board, clearing off all my lurking Genestealers. The Nids were pushed back in the first couple of turns and scoring poorly, but some nasty smites, the combat prowess of the fexes, and some poor luck from Brad meant that by the end of the game the Orks didn't have a lot left. The score was pretty tight though, a win to the Tyranids, 78-68. 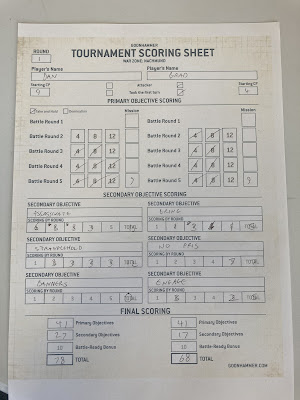 Onto round two, this time against Conner and his Genestealer Cult (previously seen playing Drukhari). He had what I assume is a typical mix of GSC infantry units, loads of characters, a trio of Ridgerunners with lasers, a few Goliaths and a couple of blobs of Purestrain Genestealers. It would be interesting to see how the two types of Genestealer got on together. The mission was Conversion. 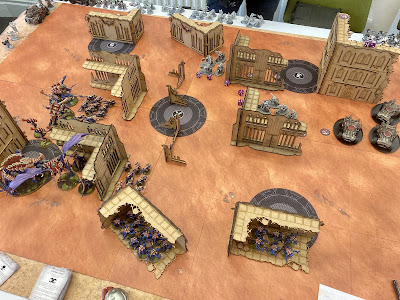 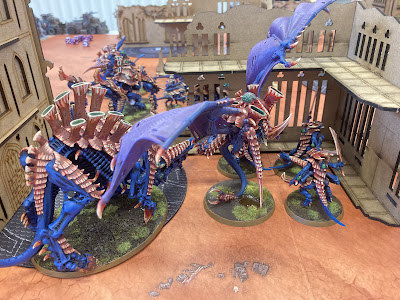 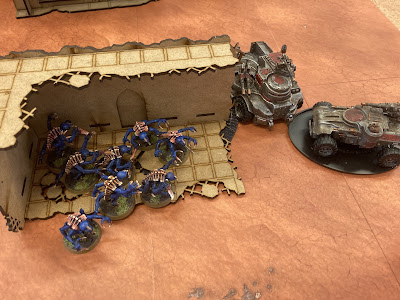 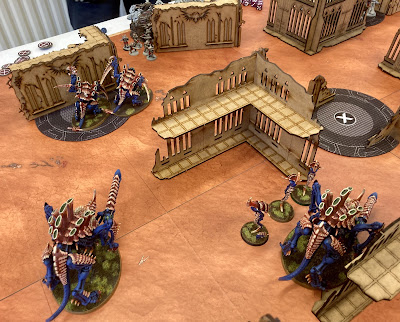 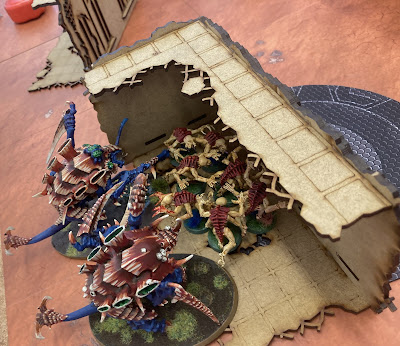 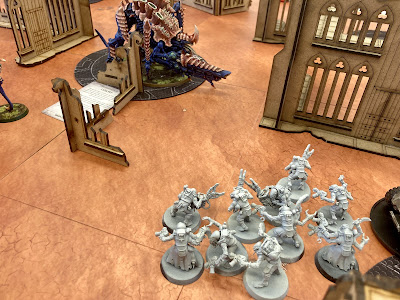 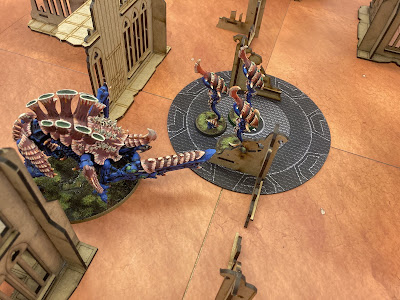 This was a similar story to the previous game, with the GSC going first and taking board control while cutting through the chaff, and then suffering a nasty counter attack. We did find out that Behemoth 'stealers are the match of Purestrains, as a unit of 6 used the fight on death stratagem to remove 7 of their attacking opposite numbers, with the rest of the unit failing morale and running! With the scores very tight we had a key moment where the rock cutter armed Acolytes charged a Tyrannofex on the central objective, reducing it to a single wound to tie them up for another turn. That would turn out to be critical as when the points were tallied, the Nids were on top by a mere five points! 77-72. 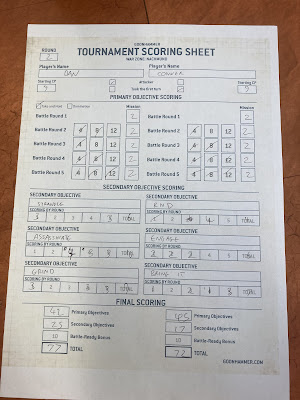 The final game was against Lewis and his gorgeous Freeblade Lance of Imperial Knights. This was my first game against the new Codex so I wasn't quite sure what to expect of them. He had a Paladin warlord kitted out with loads of stuff, another character in a Castellan, and then three of each standard Armiger. The mission was Tide of Conviction. 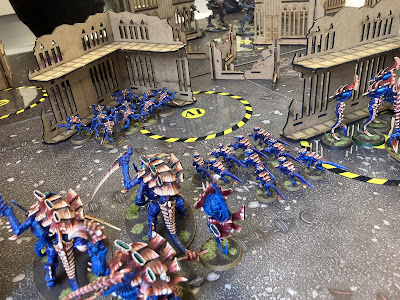 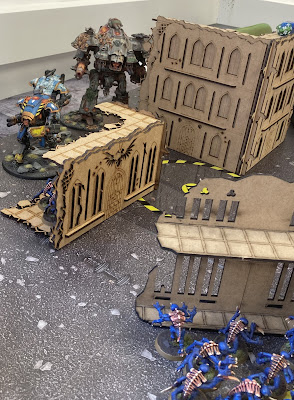 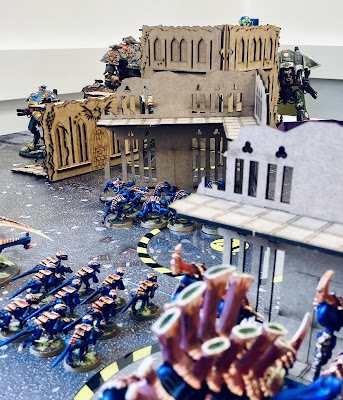 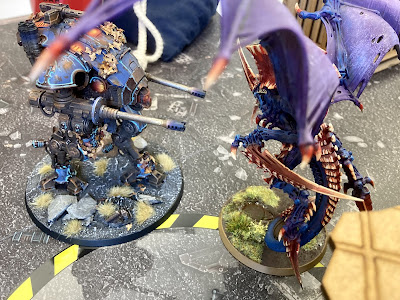 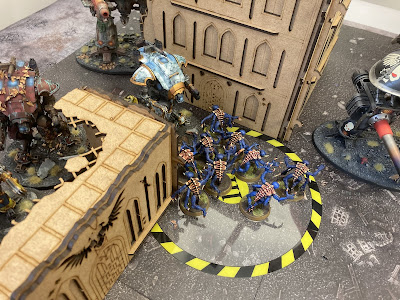 This one was a bit one sided in favour of the Knights. They got first turn and from a corner deployment were able to blast one of the Tyrannofexes and a Carnifex off the board (the terrain set up and size of the models made it very difficult to fully hide them). I was able to get some pressure forward with Genestealers and the Hive Tyrant but my force quickly ran out of gas (and luck) after taking out a few of the Armigers I was reduced to a couple of broods of Termagants hiding in the ruins. I also have to admit I played it like a bit of a lemon and left my home objective at one point, not only costing me points but also denying my my command point for a round! The end result was 92-33 to the Knights (and I forgot to take a photo of the score sheet for this one, sorry! I think I scored a token few points for turn one Stranglehold, RND and Bring it Down.)
So in the end I went 2-1, but a low scoring final game meant I finished 4th out of 8. As usual I'll happily take mid table, though I have to admit for once, with a true 'top tier' faction I was hoping for better. In hindsight I actually think the list I took last time would have been a better bet for me, as it had much fewer moving parts and I was coming into this fairly low on games (as you may have noticed, I only had one post here in June!) I frequently found myself missing stuff in the command phase, forgetting who had what power, and simply wanting some more board presence. So with that in mind, I'm pretty pleased with my 2-1. I definitely think though next time I will focus more on writing a list that has a little bit less going on and without the pretensions of trying to win.
One more note, this was the first time Grim were using the BCP app and as an ITC event. While this is cool and I enjoy now having some ITC points (I have 78.61 and sit in 8418th position out of 12660 at time of writing), I didn't enjoy having the set the tables to specific terrain layouts at the start of each game. I'm not convinced that moving the ruins around to precise measurements improved the game much, and certainly contributed to the brain ache that this very complex game induces.
Regardless, I'll certainly go again, and I definitely had fun. Thanks for reading, and thanks to everyone involved in the event. Hope you enjoyed, stay safe!
Posted by Redtoof at 14:29