Hello!
GW released the Tempest of War cards recently, seen as a kind of blend of the current GT pack style matched play games and the old maelstrom cards. I bought it pretty much immediately, since I used to love the Maelstrom style of random objectives and, though I do like the GT pack missions, I dislike having to build an army around your chosen secondary objectives. With that in mind I've been looking to give them a go for a while, so when I was invited back to JP's garage for a game, we gave them a go!
Having recently got a shiny new book, I wanted to run the Tyranids again, though a little wary of what new 9th ed books can do, I took a mix of mostly the units I didn't take to the Grim Dice tournament. Though that's not to say I didn't want to win - this was the site of my only previous Codex, 9th ed game with Tyranids, where they got battered by JP's Cadians, so I was out for a bit of revenge! 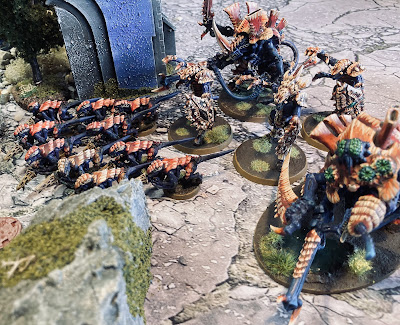 I took a Behemoth list again with a battalion, using a walking Hive Tyrant to lead the force, an old Hive Tyrant aka Tyranid Prime, and Old One Eye filling out the HQ slots. Two units of Termagants, two of Warriors and two of Gargoyles made the core of the force, supported by a pair of mixed Carnifexes, Raveners, Hive and Tyrant Guard, a Mawloc and the first showing of the Haruspex. Notably I took the Shardgullet relic Venom cannon on the Tyrant, thinking that traditionally gun relics are a bit mediocre... 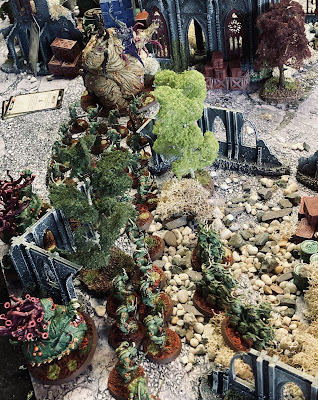 JP took a whole load of Nurgle Daemons to the party. Two full units of Plaguebearers and a big blob of Plague Drones made up most of the numbers, supported by several units of Nurglings, a few Beasts, and led forth by the trio of Nurgle heralds and two Great Unclean Ones - an Exalted one with a 4+ feel no pain and Rotigus the special character version.
Though obviously this now represents one of the oldest and least powerful books, I was aware that the Nurgle forces were surprisingly fast and would be swarming all over objectives from the go. Notably one of the little characters was able to let the two GUOs advance and charge, which could be significant... 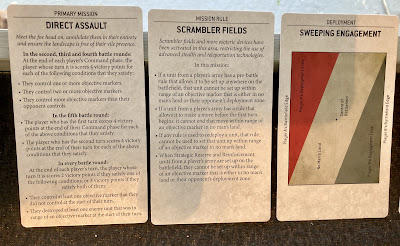 So here's the mission the cards gave us. Direct Assault pretty much in line with a GT pack mission, Scrambler Fields restricting pregame movement and mid game deployment somewhat from being placed near objectives (I think this version is a bit more interesting than the flat 'no forward deployment' clause they've used in GT packs) and finally a slightly funky but not too challenging deployment map. 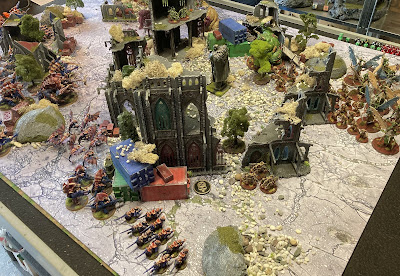 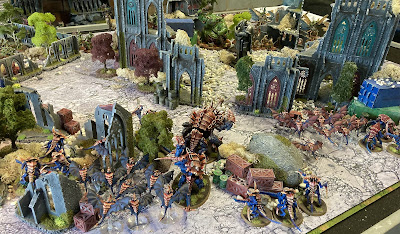 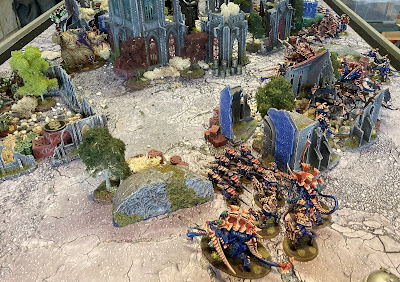 Deployment - I stuck my snakes underground, and everything else was popped on the board. We decided the front 'gate' to the big ruin section of the board would be navigable by all the big monsters, but even with that there would be some interesting choke points.
JP won the roll for first turn, and the Daemons surged forward! 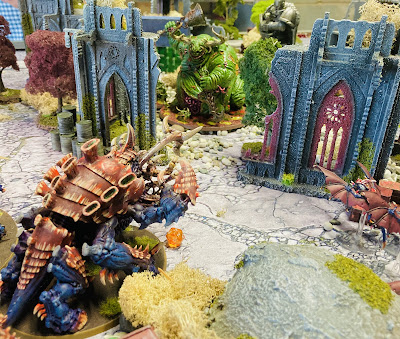 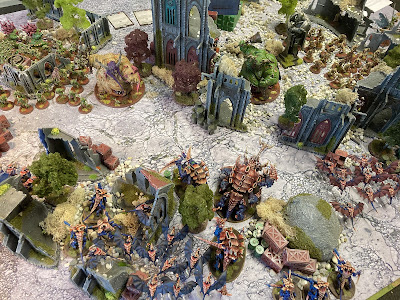 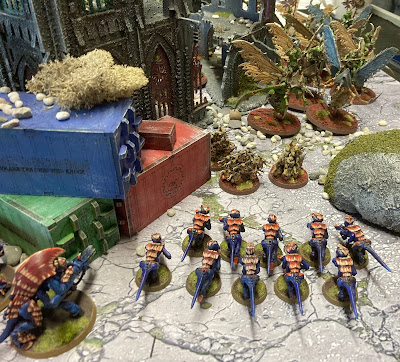 The Nurgle forces quickly moved out to cover all of the objectives aside from the one in my deployment zone, picking up some secondary points in doing so. There was also a secondary objective to Bring It Down, where It was the Haruspex. You remember the Great Unclean ones were able to advance and charge? 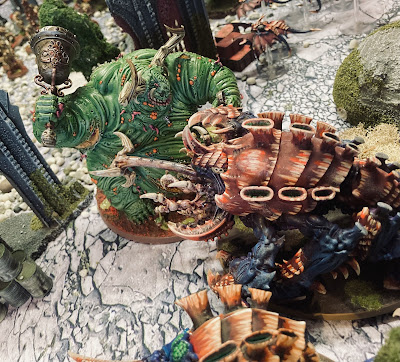 Yeah, that big boy made it in to melee! A few big cuts with the blade (added to some earlier smite damage) and the newly painted Haruspex went down in turn one! It did somewhat make up for it with the Acid Blood stratagem stripping five wounds off the GUO.
A glorious first round for the Daemons, though luckily Rotigus failed the charge to one of the Carnifexes, and was sitting in a similarly forward position to it's brother. 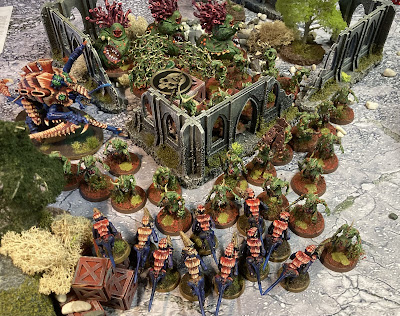 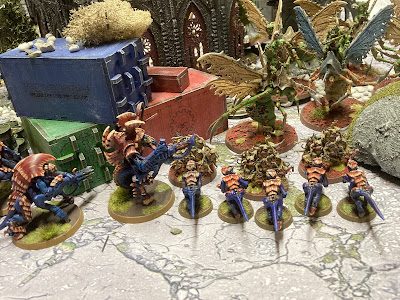 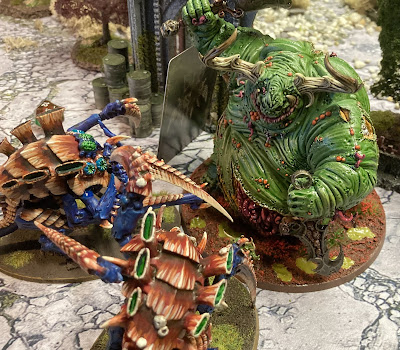 Tyranid turn one, and time for revenge. Thanks largely to the Shardgullet (damage 5?) and buffed to hit on 2s Carnifexes, my shooting and psychic took out Rotigus with little wasted effort, then Old One Eye and a 'fex piled into the remaining, wounded GUO and tore him down.
Elsewhere the Nid forces ran into blocks of Nurgle daemons and didn't make much of a dent. So that was most of the Nurgle damage potential used and removed in the first battle round, but a whole lot of board control for them requiring a bit of a grind to deal with.
Turn two for the Daemons was basically a bit of shuffling, scoring a secondary or two, and a whole bunch of primary points. 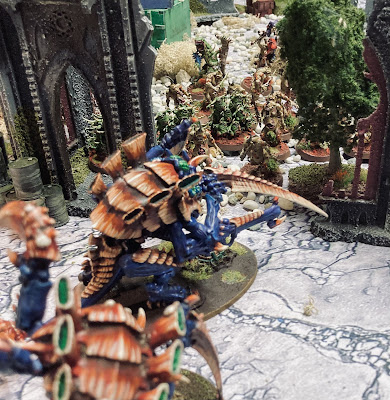 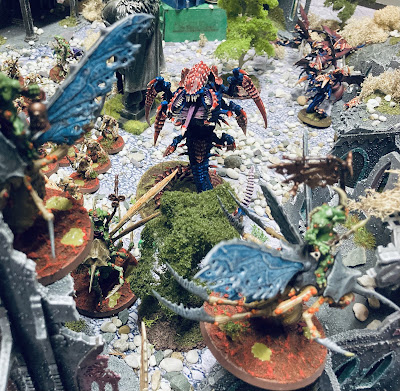 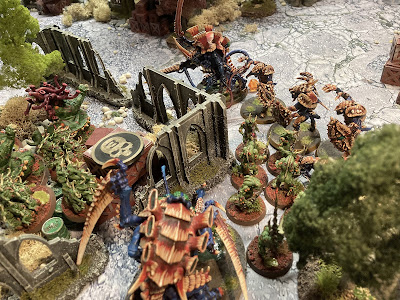 Tyranid turn two, the reserves arrived and the forces pushed in. Lots of Plaguebearers died, but not enough to push them off the points yet. I found out that Raveners are pretty tasty now, massively improved in both output and defence. Tyrant Guard also did some work.
Daemons had another quick turn three, wracking up more Primary points, putting them into a fairly significant lead at this point. 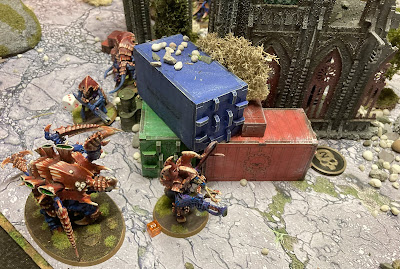 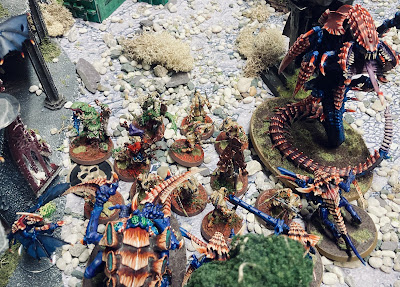 Tyranids turn three however proved to be a decisive blow. Old One Eye managed to remove pretty much the entire squad of Plague Drones, the Mawloc made it in an blended some Plaguebearers, and the Fexes/Tyrant continued to deal consistent damage. By the end of the turn the Nurgle forces consisted of just the three Heralds. Ouch!
With two turns basically unopposed to wrack up points, it ended up in a stonking victory for the Nids. 95-55.
Well, that was looking like a tight game, until it wasn't. An amazing first turn turned into a bit of a pasting as the old 8th ed rules just couldn't hang with the huge weight of quality attacks from the Nids. Stuff like 16 attacks on the Mawloc made a big dent where they might otherwise have been less impressive vs any of the Armour of Contempt factions for example. I think whenever the Daemons book rolls around it's going to have to have some massive changes.
As for Tempest of War - I enjoyed it, but I don't think this was a very good test for it. It's also worth noting that we didn't find it significantly easier in terms of book keeping than the GT missions - it just shifts a lot of the decision making from list building/the start of the game to mid game, basically every turn. Personally I'm ok with that, but I don't think it's entirely fair to say that Tempest is 'easy' matched play.
Anyway, thanks for reading and hope you enjoyed. Even though the game was one sided, we still had fun - it's always a treat to play on a beautiful table with two fully painted armies after all! Stay safe out there!
Posted by Redtoof at 17:08