Hello!
Back to back Tyranid Crusade games for the Grim Dice League - this time against the Jamie and his sneaky Aeldari with their giant gate. Once more it's 50 Power Level, playing from the Wars of Faith mission pack - the mission was Eternal Desecration, a game with two icons each instead of objectives, where players compete to do actions to desecrate their opponent's icons to weaken them and score points. Notably the action lasts until the start of your next turn so units have to survive on the enemy 'objective' to score - potentially quite a challenge. 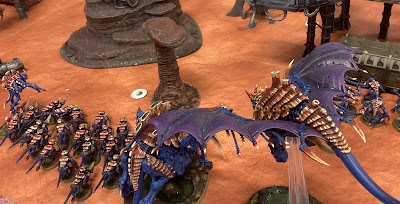 My list was of course the same as last time, with the exception that the Crone and Tervigon had both gained some nice upgrades - two damage Drool Cannon and free Power of the Hive Mind strat respectively. I opted to make the Tervigon my paragon again, and my agendas were Hunt and Slay (which is becoming a standard pick - just kill stuff basically) and Survivor on the Tervigon. 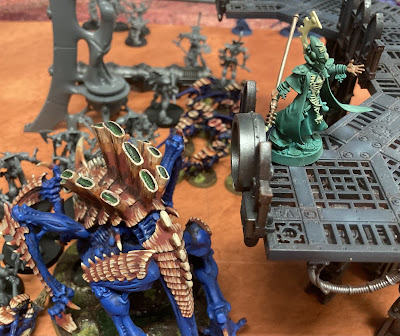 The Aeldari were bringing a Farseer and a Warlock, a couple of units of Dire Avengers, some regular Jetbikes and some of the new Shroud Runner variants, a unit of Dark Reapers, the big old Webway Gate and clocking in at nearly half the force, a block of 10 Wraithblades - who were hiding in the Webway along with the Farseer. Jamie's agendas were effectively to kill monsters and characters. 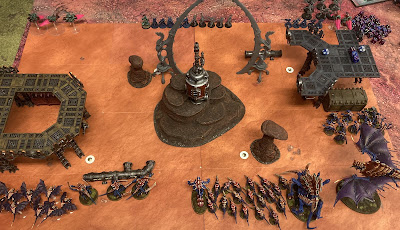 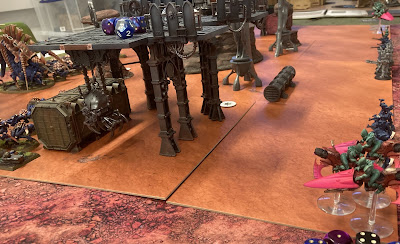 Deployment - Tyranid troops ready to move up around the central hill, Genestealers forward deployed on a flank to charge forward if given the chance. The Eldar pretty much hugged the back line on this small board.
The dice were rolled, and I won first turn. I've been bitten before by thinking going second was a smart move in this kind of situation, so I opted to charge forward straight away! 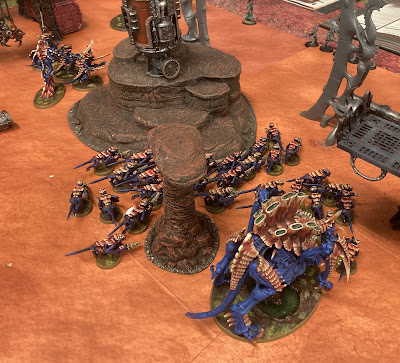 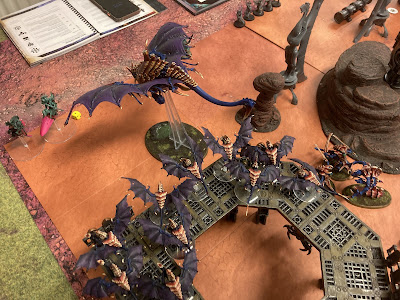 'Ere we go! (Wait, wrong army...) The Tyranids moved up into the mid field rapidly, after the Tervigon spawned a new unit of 'gants. The Crone, Gargoyles and Warriors went left to pour fire into the Shroud Runners and other units, while the main bulk of Termagants went left, and the Genestealers moved up to make a mess out of the regular Jetbikes in melee. I managed to remove the Dire Avengers on the left with Stinger fire from the Crone but a lot of shooting went into the Shroud Runners and got some poor wound rolls to keep them reduced but alive. The regular bikes did not fare so well and were swiftly chopped up - the Genestealers finally did a thing!
The death of the Dire Avengers gave the Crone some more experience, and exposed a Warlock who was another of my Hunt and Slay targets. 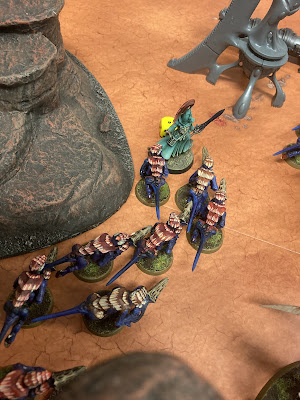 Eldar turn one and they tried to do as much damage as possible, including the Warlock charging forward to ruin some Termagant's day - and nearly dying to them in melee for his troubles! The remaining Dire Avengers pumped a load of command points into their shooting to remove the Genestealers, while the Dark Reapers split some fire to put wounds on the Tervigon and remove a bunch of 'gants. 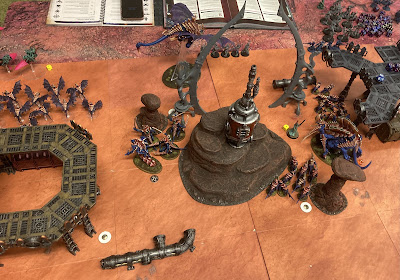 Turn two saw the swarm move up further and attempt to complete the Desecrate action on both idols with the warriors and spawned Termagant unit. Elsewhere I got into positions for some killing blows. 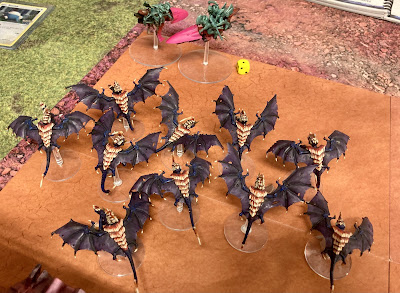 This was not one of them, in spite of help from the Crone's Tentaclids, the Gargoyles failed to remove either of the Shroud Runners. 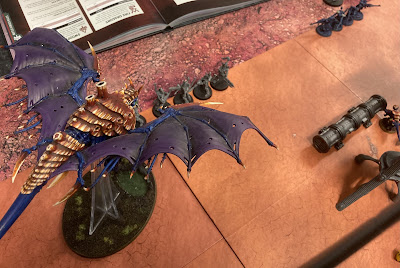 The Crone also failed to remove the Dark Reapers, merely killing the Exarch with it's firepower. 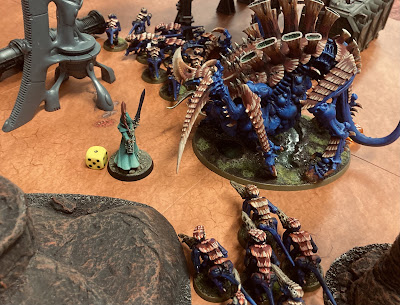 The Tervigon did have better luck, removing the wounded Warlock with a smite. Overall not nearly as strong a turn as the first, but I was in position to score points - the Wraithblades were about to come in but they'd struggle to remove all my scoring models. 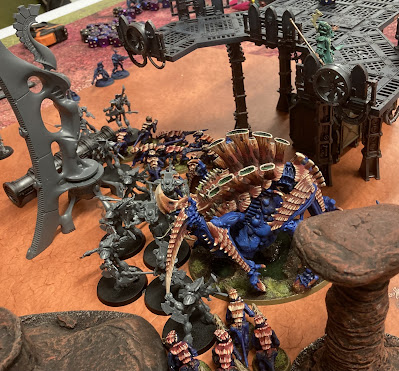 As it turned out, they opted to leave the Warriors alone and focus on the Tervigon and Termagants. Thus began a grinding melee as they slowly chopped through the big beastie. Elsewhere the Dark Reapers fell back and shot with a strat to hurt the Crone, and the Shroud Runners removed the Gargoyles with ease. 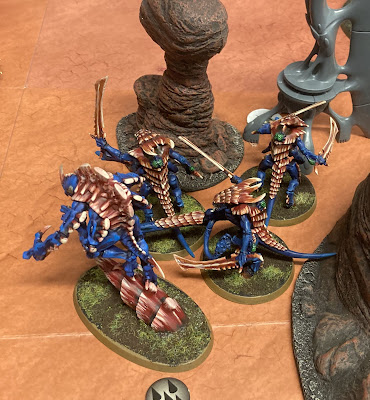 However with the 'blades focused mainly on the Tervigon I was able to complete both actions and score a bunch of points in turn three. The Tyranid shooting then set about removing the last of the original Edlar models - warriors finally did in the Shroud Runners, while the Crone split fire to remove the las Avengers and Reapers. 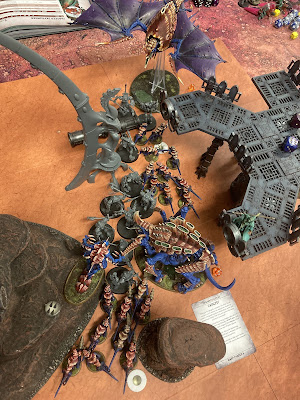 I then had the Crone and Broodlord charge in to the big fight in the middle - without much effect. I think between all my units I managed to kill the Farseer and two of the Wraithblades, losing the Broodlord, the Tervigon and most of the Termagants. The Crone escaped on one wound and flew away in my next turn. 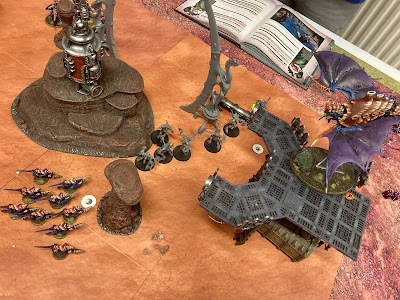 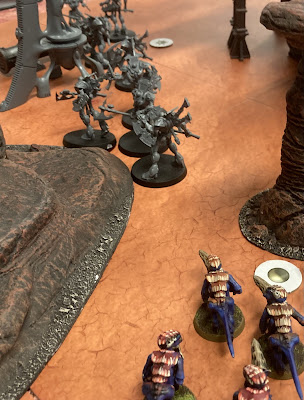 In turn four and five, with no non-Wraithblade units left, the Aeldari were pretty much out of options for actually winning the game. I fell back and avoided them to preserve the units they were fighting, but they did take out the Warriors in one last act of undead rage, removing the Nids from their idols eventually - though finding them slowly dissolving from Tyranid bio-acid.
Victory for the Tyranids.
Once again, this was a Crusade game on a small board where I went first, covered the board and won the mission, but once again I was left with not much left - feels very Tyraniddy. I do think at 50 PL these small boards are a bit too cramped, and it's hard to set up terrain that both looks good and provides proper hiding places without totally cutting off sections of the board. That said, as usual I enjoy the Crusade rules making every destroyed unit matter so it's always worth playing on even if the game is already decided.
After this game we're going up to 75 PL in the league, so I've updated my roster accordingly. I also picked up about Biomass to move from the Invasion to Predation stage, so now I am encouraged to bring troop units above all else. The Crone also picked up a bunch of XP so with Marked for Greatness levelled once more, becoming an Apex Predator to reroll ones to hit. In spite of actually achieving something this game, I did drop the Genestealers, and I used Tyranid requisitions to turn the Broodlord into a Tyranid Prime with the Direct Guidance warlord trait, and granted the Crone an adaptaion - Voracious Ammunition. I've added in a couple of big troop blocks to take advantage of the Predation stage and a couple of iconic Tyranid models to provide some heavy hitting:

Anyway, thanks for reading, hope you enjoyed, stay safe!
Posted by Redtoof at 14:29