Hello!
Over the weekend I went to the Leicester City GT, and I had a blast! It was the biggest tournament I'd been to with around 250 players (plus a smaller AoS event running alongside) and the first sizable one since the 40k Grand Tournament at Warhammer World back in early 2020. So I have been looking forward to this one for a while.
For this post I'm going to briefly talk about my list then give an overview of each of the games, then some thoughts at the end. I'll go ahead and spoil the result now - I lost all of them. No wooden spoon however, I did rank at the top of all the people with no wins. I was never going to win so I'm not super disappointed, but of course it would be nice to come somewhere safely in the middle - but more on all that later.
I had a real tough time decided on what to take with me, as I was torn between fun, power and convenience. I had initially intended to go Orks, but Tyranids would be a much more 'meta' option and Death Guard would have been much easier to move around on a tray! In the end I did go with the Snakebites, taking a similar list to the one I took against JP recently, but with some adjustments made in the name of logistics. Less Boyz, more Toyz.

Game one was against Stephen and his Necrons. No Silent King, but he did have the Void Dragon, a load of Heavy Destroyers and many many Canoptek units. The mission was Abandoned Sanctuaries. 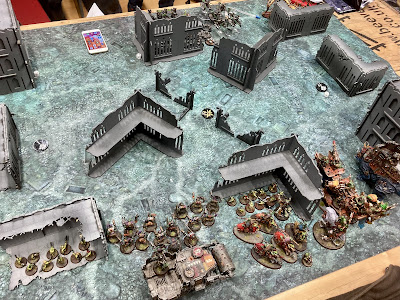 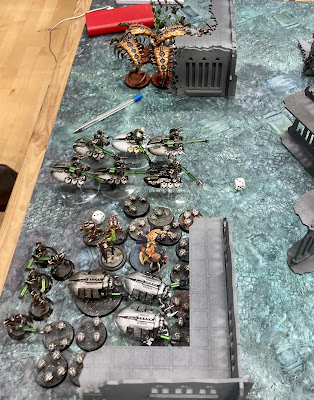 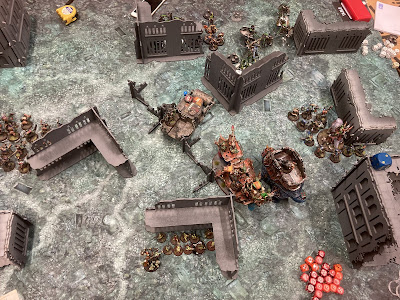 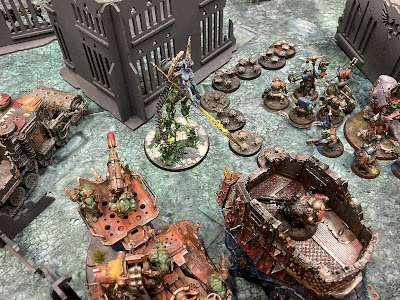 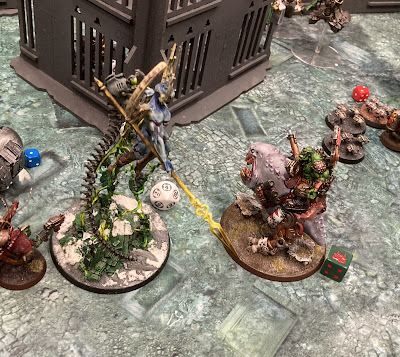 Ultimately the game was decided by a poor decision to attack against Spyders first (with ultimately little effect as the one I killed came back) rather than the Void Dragon, allowing him to attack, ignore invulnerable saves, and down Mozrog Skragbad. Before then I think I was right in the game but I wasn't able to come back from failing to kill the big guy. Highlights of the game before that were probably the Squighog Boyz and Mozrog battering Wraiths. It ended 100-53 to the Necrons.
Game two was Data Scry-salvage vs Aarron and his cool jungly Tau; green suits, blue Kroot and loads of vegetation on the bases. No vehicles, just loads of suits. 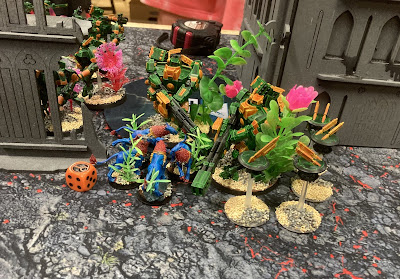 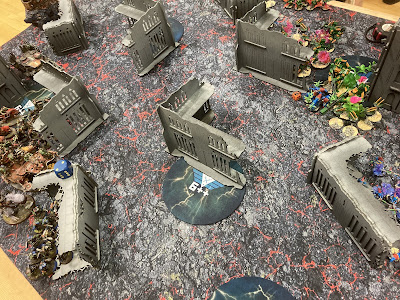 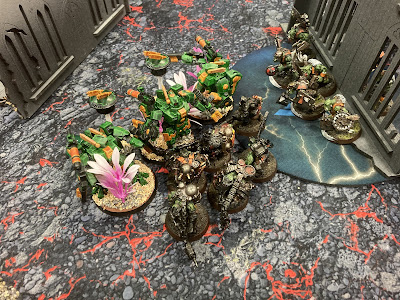 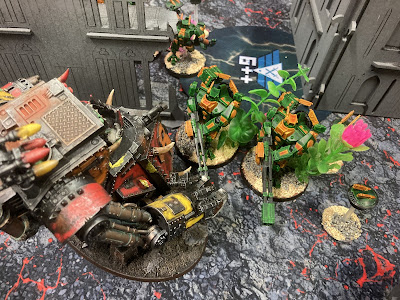 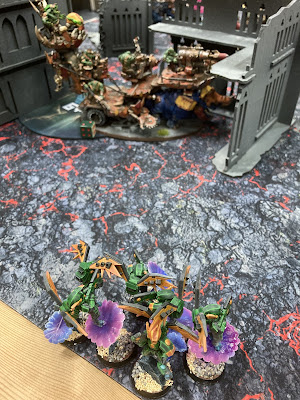 I felt like I played this one well - I scored early points and made him work to take out my big targets for Bring It Down. Sadly it was a tough match up and I think it fell apart when the Gorkanaut made a charge out of the Tellyporta into the Broadsides and only killed a couple of drones. With that they stepped back and Kauyoned it to death. I made good progress chewing through the chaff but the Suits and their drones were just tough to deal with. This one ended 78-55 to the Tau.
Game three was the first of a pair of Dark Angels players. Rob had a cool mix of Death, Raven and green wings. Big blobs of Terminators and Black Knights supported by, among other things, plasma Inceptors and the Land Speeder Vengeance. Mission was Death and Zeal. 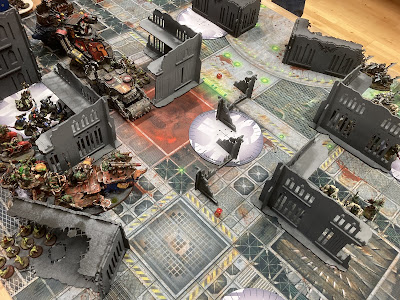 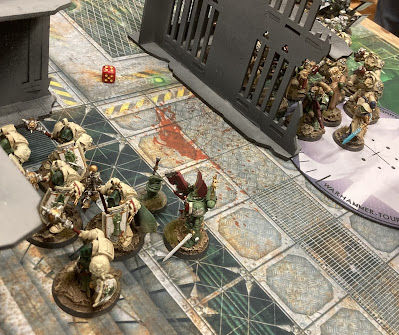 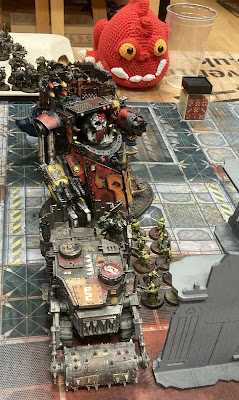 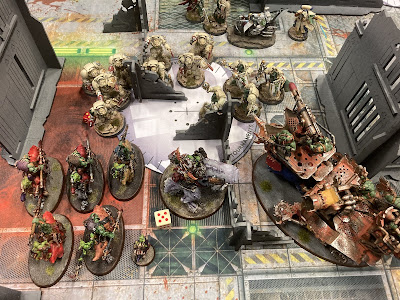 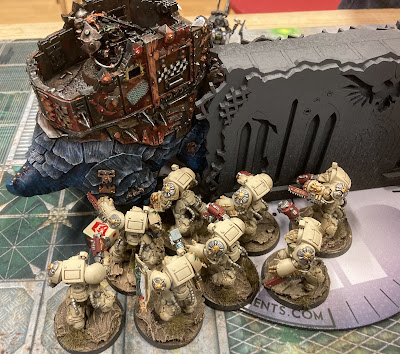 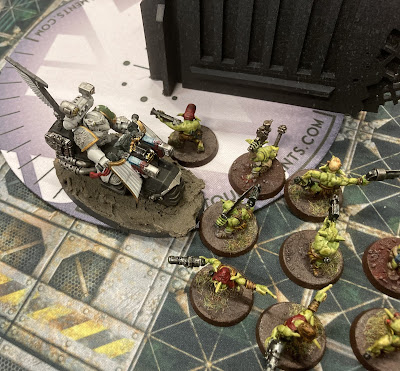 If I'm honest with myself I played this one very poorly, going half arsed on attempting to take out the Terminators in the middle vs ignoring them and focusing on the corner objectives. I did manage to control the primary points pretty well but I just fed more units than necessary into the grinder in the middle. In spite of this, it was the closest game of the lot, with Mozrog coming back from the dead to kill off a couple of characters once the Terminator blob had stomped off to secure a corner, and needing Azrael to fail a charge on a Weirdboy in order to hold my home objective in turn 5. Sadly for me he did get in and cut down the psyker with ease, a four point swing ending the game 78-76 in favour of the Dark Angels.
Game four was more Dark Angels, this time almost full Deathwing. My opponent, Reg, had a psyker support from Librarians and an Inquisitor, plus a couple of sneaky phobos units, and then about 40 Terminators.Tide of Conviction was the mission, giving opportunity to grab some Good Bitz early. 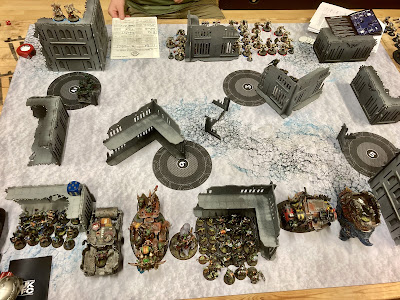 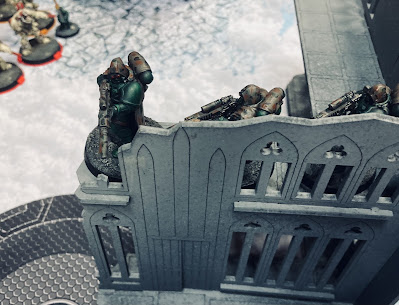 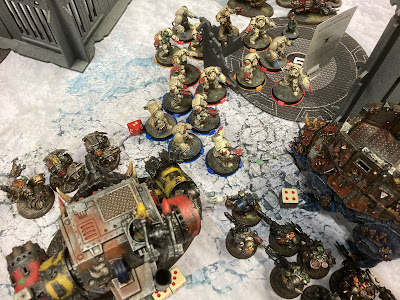 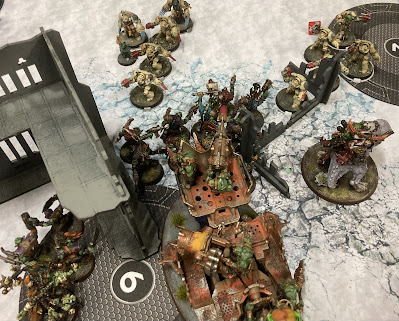 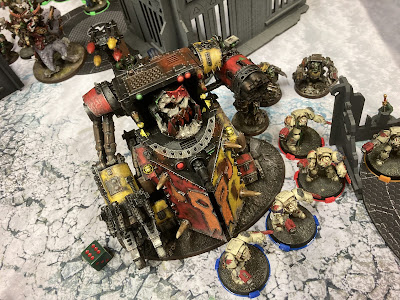 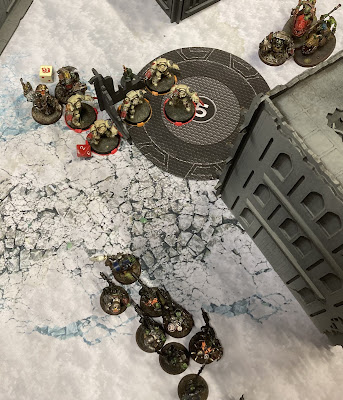 I did get off to a strong start, but the grind eventually started to favour the Angels and their ObSec Terminators. I did manage to kill a decent number (15-20 of them I think) but I didn't have the staying power to hang with them. Highlight was the Gorkanaut exploding to kill a whole load of stuff on both sides, including the wounded Squiggoth. This game was a bit slower than the others, the only one I didn't finish, so ended 48-38 to the DAngels on turn three. There were still some opportunities for me to score but I don't think I was ever likely to overcome the deficit with the units I had left.
So onto the last game, it was Secure Missing Artefacts against Gerard and his Astra Militarum (using the 8th ed book at the time of playing the game). A classic Guard gunline with a load of Leman Russes, artillery in the back and plenty of squads of meat shields up front. 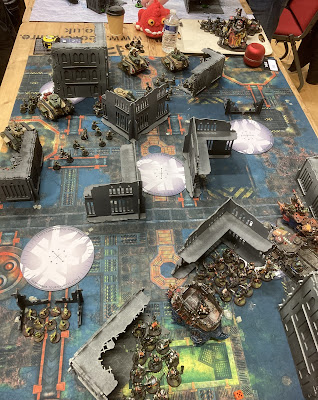 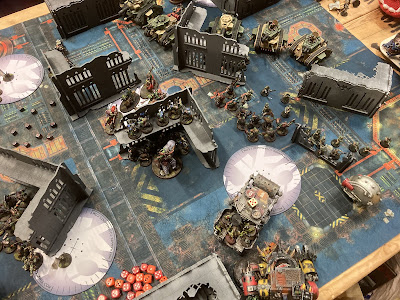 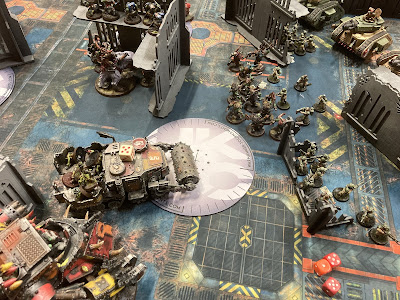 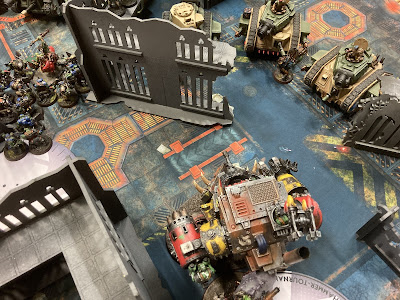 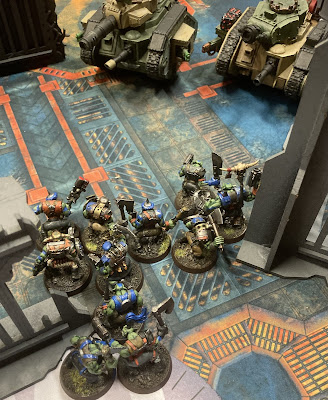 Once again, this was a tough match up - 8th Ed Guard may be a bit underwhelming in 9th but if there's one thing they can do it's blast Orks off the table. I felt like I was in a strong position in turn 2/3 when I made it into melee and tagged some tanks, including getting the Squighog Boyz into a Demolisher Commander, but those metal boxes were just too tough and in the end I was wiped out, bar a few Grots and the Weirdboy. A fairly close scoreline saw the Guard take the win 86-75.
And there you have it. A few close ones but ultimately five losses is five losses. Like I said at the start I still had a great time, all my games were fun and my opponents courteous, but still I feel it could have gone better! I think I had two games that I lost because I played badly, and three games where I lost because my army was 'bad'. All my games went through a similar pattern - turn one and two the Orks spread out everywhere and caused some damage, then in turn three they pretty much all died and I didn't have enough to scrape enough points at the end.
As much fun as it is playing Orks, bringing some big stompy stuff and lots of Boyz, and having an adorable red squig in my corner, I kind of got tired of that second half collapse and then not really being able to play the game at the end. I was particularly disappointed with my big models on this regard - the Gorkanaut and the Kill Rig in particular did not do the damage I would have hoped for once they reached melee. They, and everything else, really struggled to get through any reasonably hard targets. The Squighog Boyz were probably my best unit, but they still failed to make their mark against most of the stuff they were set upon. I have a lot of respect for the people who do make Orks work - notably the player who came second overall was running them, but it definitely feels like the 'classic' builds are suffering at the moment.
Now, with that little whinge out of the way, thanks for reading and I hope you enjoyed it. Even if you aren't a full on competitive player, these kind of events are still great fun and I definitely recommend it should you get the chance. Stay safe out there!
Posted by Redtoof at 15:56