This time I've finally gotten round to the actual rebasing stage of the Great Rebasing. At this point I'm working through 160 Ork Boyz, doing a few repairs and repaints along the way to sort them into 6 units of 25-30 with squad identifying warpaint. At the time of writing, I have finished one 25 Shoota boyz unit (Da Yellow Ones) and have started on 30 Sluggas (Da Pink Ones). If you've been following you'll know I've gone with 32mm base adapters from Tabletop Adapters, so this is kind of a review I guess? 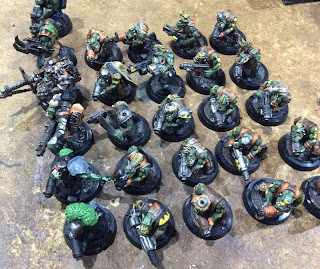 Here's the yellow boyz with their new base adapters attached. The front rank are special guys with two big shootas, two tankbusta bombs and two Nobz - one with a powerklaw and an alternative one with just a kustom shoota in case I want to field a nice cheap objective holding unit. At this stage you can see there is still work to be done! 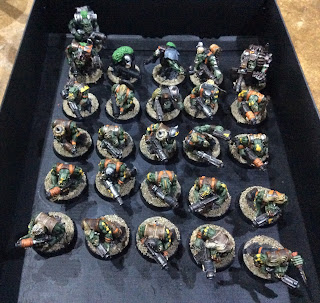 Sand on the bases immediately makes them look better, but having to paint all that sand black again before drybrushing is a bit of a pain. I've experimented pre-spraying some slate and rubble bits for the next batch to speed things up a bit, we'll see how that goes. 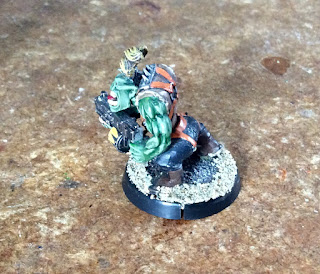 The TTAdapters are certainly faster and easier than ripping off the bases and starting again, but I have found that they are not usually a perfect fit. Possibly because the bases they are going on are already painted and they are designed to fit nice and snug over unmodified bases? Or maybe older GW 28mm bases just vary in size slightly? In any case there is a gap on most of them that needs filling. 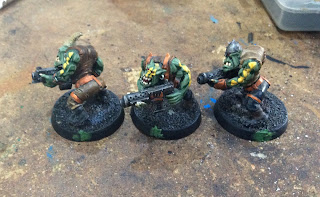 Green stuff over the gaps. It's not super smooth but it should make it less obvious in the end. At this stage the sand has been painted as well which really hides the fact that the bases have been extended. 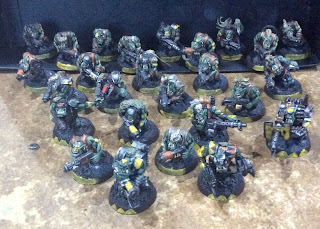 First mob finished! Boom! Yellow markings on the base for ease of identification, and dags on the special ones in case opponents have trouble picking them out. Looking at them all done, I think the bases look pretty good. Definitely hare to tell they were expanded unless you know what you are looking for. 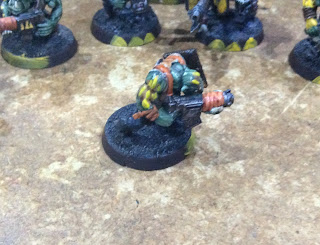 A close up of one of the gaps. It's not been filled perfectly but once painted over I don't think it stands out at a glance. Perhaps I'll put a bit more effort into hiding it on characters and elites, but this is a standard I'm happy with for 160 troop minis! 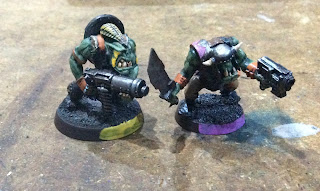 Finally, a comparison between new and old bases! I hope you'll agree they look a lot more stable on the new ones! I think it's a big improvement, and definitely worth the (relatively little) effort involved!