"I've seen that Redtoof has been playing some games, but what is on his hobby table?" Is the question on literally no one's lips. But I will answer it anyway! It's a Knight Valiant! (And has been for the past month...) 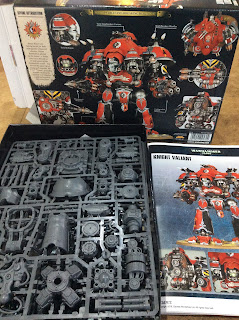 Once I'd gawped at the kit a bit, I started to put it together. I'd been warned it was a bit tricky, and while there were many components I was quite impressed with the clever design of the sprues - 2 identical ones make up the main body, arms and legs, (the legs are the same components, just assembled differently) and a unique sprue for the guns and the carapace. 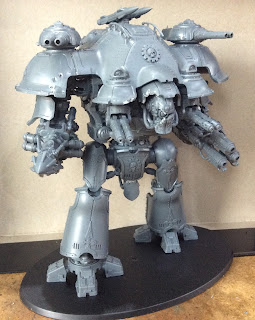 Construction took me a couple of days. I had to use elastic bands to hold the torso in position a few times to ensure it would all fit together neatly, but nothing too traumatic. I also couldn't quite bring myself to build it completely stock, so gave him/her some battle damage around the face, which would be fun to paint. 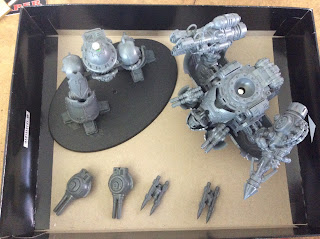 There isn't much in the way of options in the kit so I didn't feel the need to magnetise all the weapons. I did put one on the connection between the legs and torso however, for ease of transport and the ability to turn and face your foes on the battlefield! After this it was time for the base, a mix of slate, sand and some larger chunks of rock or resin. Then the undercoat, and ready to start! 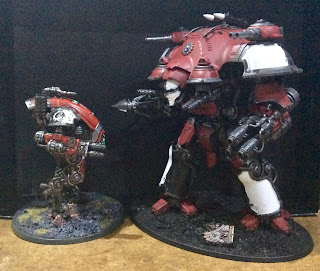 First round of boring bits. I heavily dry brushed pretty much the whole thing, before painting on the main colours. There were many layers of white. Many, many layers. 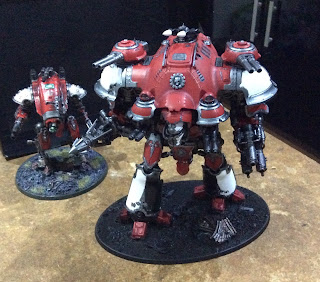 A little further down the line and the main colours are almost done. There is some shading on the red here and the trim has been painted metal. Nothing too exciting. 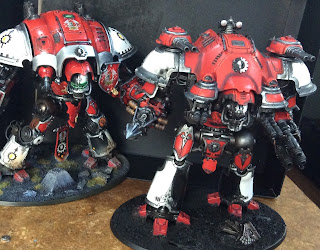 Boom, a big change to the next step. Red painted to a nice bright-ish shade, then Nuln Oil wash over all the recessed areas and everywhere that'd going to be weathered. This step really made the Knight pop and it also signaled the start of the fun bit. 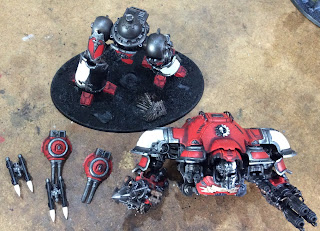 And here are all the bits as they are now. A couple of extra detailing bits done and we are now ready for the transfers. After that it's the base, the weathering and the glowy bits! With any luck the end result will be up on the blog in about a week, so keep and eye out for that!
Posted by Redtoof at 16:34