I recently went to play my first games of Adeptus Titanicus against Winters/Moarhammer community stalwart The Claw. He runs Legio Magna aka The Flaming Skulls, a titan legion pledged to Horus, and had recently suffered defeat at the hands of the loyalists. The Warmaster does not tolerate failure, so I brought along the Death's Heads, Legio Mortis, to punish them for their weakness! 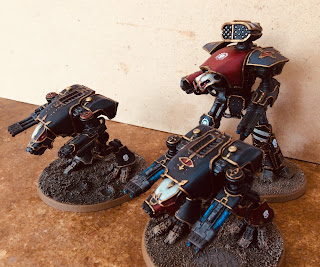 I brought my currently painted Titans, two Warhounds and a Reaver, kitted out close to those pictured, except one of the plasma blastguns on the closest Warhound was swapped for a Turbo laser in order to try a bit of everything. Since we are both pretty new to this, we didn't use any stratagems, maniple or legio rules, run a fancy scenario or pick a princeps senioris. We just played a couple of standard 'kill each other' scenarios using the Engage and Destroy objective. We did however play with the advanced rules, and I think we more or less got them right. 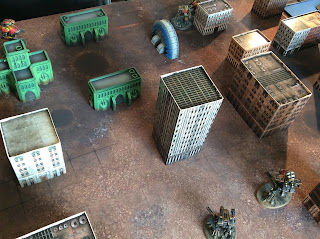 In our first game The Claw took a mirror maniple of a Reaver and two Warhounds, though he did kit them out differently. His Reaver took the Gatling blaster and the Volcano cannon as well as the Apocalypse launcher, and the Warhounds had twin Turbo Lasers and twin Mega bolters. 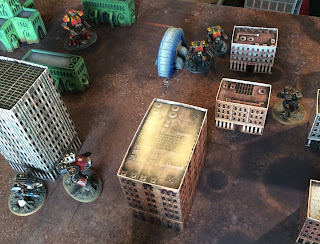 We moved cautiously to start with, though I ran the inferno cannon armed Warhound up at full speed between the buildings. The Claw had his warhounds hang close together to share their shields, while the Reaver stayed back in his firing position. 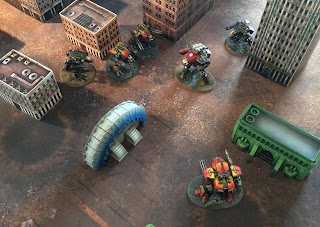 A few turns in and things got interesting. I moved my Reaver into the middle of the street, effectively as bait, drawing both enemy Warhounds into the clear, ready for mine to pounce. It got even more interesting when The Claw managed to push one of their reactors into the orange, which, after I had stripped away the void shields, caused huge damage and crippled the titan. 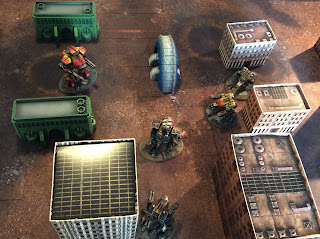 This left me with an easy engine kill, and the brutal power of the Inferno cannon (and some good rolls) meant the second Warhound was not far behind. However, firepower from the Magna Reaver, and a falling Warhound, had caused significant damage to my Reaver. 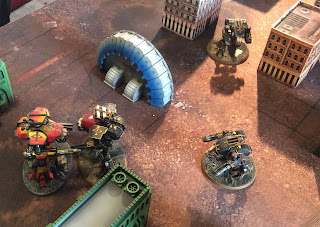 With both Warhounds down, but my Reaver smoking, I had it stomp over to try and punch the enemy with it's Power fist. Sadly, at point blank range the Flaming Skull Reaver silenced mine with the Volcano cannon. The game ended in a narrow win for Legio Mortis. Men of the match definitely went to the crew of the Inferno cannon Warhound, who took loads of fire and dealt out serious damage at close range. 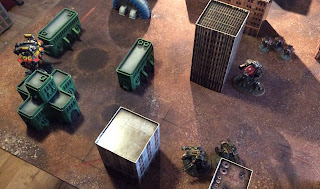 Game two featured Legio Magna unleashing a Warlord titan with Apocalypse missiles and Volcano cannons, along with a banner of allied Knights. Once again I started cautiously, using the buildings to avoid the worst of the firepower, though I quickly found out that it is very difficult to avoid a Knight banner - they are fast and maneuverable. 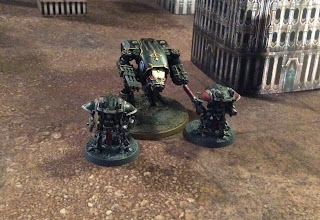 With the Knights sneaking round the side, I sent the hero Warhound from the first game to deal with them. The Inferno cannon once again doing damage, but not enough to stop them getting in and chopping away at the legs. 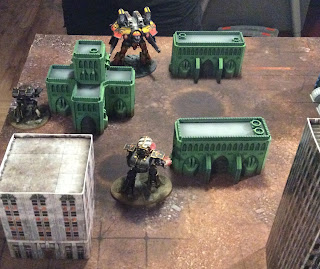 Meanwhile the Reaver continued it's suicidal streak by breaking cover to get some shots at the Warlord, while the other Warhound tried to outflank it. 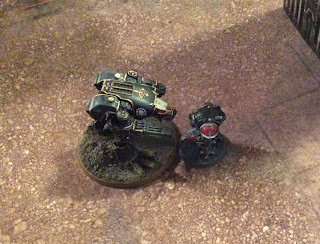 The Warhound went several round with the Knights, eventually losing the use of it's legs, but finally killing the last of the Banner with the flames of the Inferno cannon. 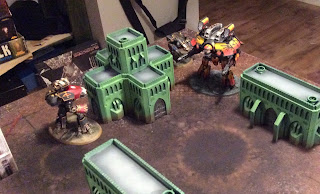 The Reaver took sustained fire from the Warlord, but somehow managed to survive critical hits to the body and head against the odds. In the last turn, the Warhound finally made it to the side of the Warlord, blasting away beneath the void shields to put some significant, but not critical damage onto it. With that, the battle ended. The Warlord stood tall, but the Knights were crushed, and though many of my engines were in serious need of repairs, none had fallen! This just about worked out for another victory to Legio Mortis! This time the Reaver proving the hero, refusing to fall, time and time again.

We both had a lot of fun, and this has definitely encouraged me to finish my Warlord, and add another Reaver. Adeptus Titanicus is a very different game to 40k, but a good palate cleanser. Much more focus on precision, predicting opponent's moves and resource management, but less target priority and watching out for killer combos. Initial impressions of course, but it feels like a game that is more focused on managing your own units rather than worrying about what your opponent is going to pull out of their sleeve. As we found out, letting your plasma reactor get too hot can be just as deadly as an enemy Titan! There is also a significant random element, and I suspect, like Blood Bowl, the core skill is to reduce the risks taken as much as possible.

Whatever the rules say, Adeptus Titanicus was a very fun and very narrative experience. It really feels like a big stompy robot fight! I will definitely be playing again!
Posted by Redtoof at 08:28