I played another awesome game of 40K against Stig, and this time the Luna Crusaders were faced with the treacherous, deceitful, heretical Alpha Legion of the Fractured Truth. Given that these foes would need little excuse to tear each other apart, we played the most straight forward mission in the book - No Mercy - just kill points.

We played at 1750 points. Stig took a slight variation of his previous list - the Reivers got swapped out for an Apothecary and there was a bit of shuffling elsewhere, including macro plasmas on the Redemptors. It was Black Templar chapter tactics, a battalion and two vanguard detachments:

My list was an excuse to use a few new toys, as well as being a bit narrative-y. I took an all tzeentch marked battalion and an all Khorne marked vanguard (with the Master of Executions and the Elites). I resisted Mark of Slaanesh on the Obliterators because we know what they can do all buffed up, I wanted to try them with minimal support and see if they still held up. 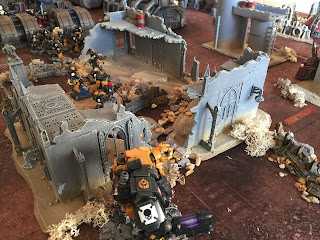 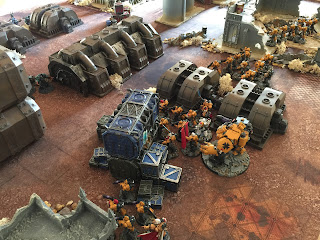 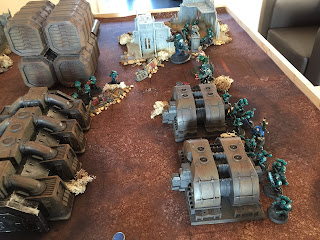 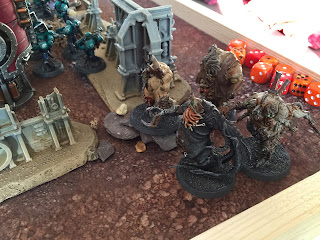 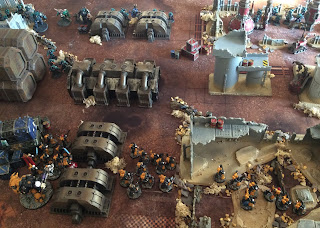 Deployment done. Using the old rulebook style deployment, I finished first and got first turn. We spread our units along the lines where the dense terrain of this ruined industrial zone would allow, focusing a chunk towards the centre of the arrow shaped deployment. I used Forward Operatives to move the Terminators up before the first turn, getting them into a good position to do some damage. The Oblits started off the board, as did the jumpy and bouncy dudes. (Inceptors, Suppressors.) 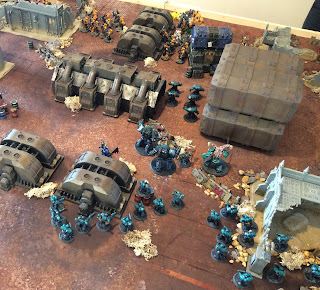 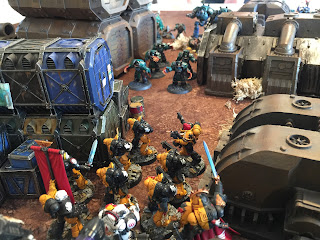 My turn one, there was a bit of shuffling around, and the Terminators went straight up the gut. On the far flank the Spawn advanced to hopefully cause some problems later. Psychic powers mostly whiffed, crucially failing Warptime on the Terminators (presumably because they were marked by Khorne and did not abide by that trickery.) Shooting was largely inconsequential, with the highlight being a Contemptor putting 2 wounds on a Redemptor. Then it was the all important charge phase. We measured up a 5 inch charge for the Terminators into the closest Intercessors, or a 9 inch to the Hellblasters. I charged both, and proceeded to roll a 4 inch charge, even with a command point reroll! The Terminators were not in a good place! 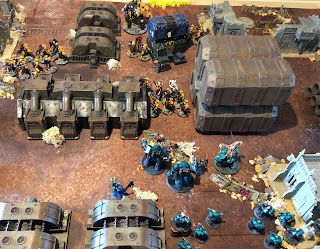 Predictably the Crusaders' counter punch was deadly, utterly destroying the Terminators, with the Emperor's champion taking the head of the last member of the squad. That was a kill point and first blood, putting Stig into the lead. On the flank I lost a couple of Spawn, and one of the Contemptors took minor damage, but nothing major. The Counter-counter punch could prove deadly... 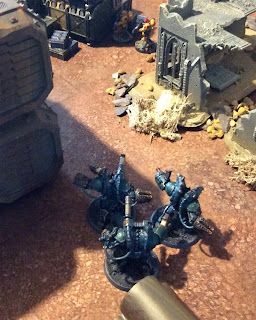 Time for the big guns to arrive! The Obliterators teleported in on the flank to target the Hellblasters. Elsewhere the Contemptors took their turn going through the narrow gap. Psychic and shooting removed most of the Intercessor screen. Then came their big moment, the Obliterator's first shooting phase. Debated Veterans of the Long War, but thought they could probably gut a unit of 5 Hellblasters without it. Strength 7, Ap -1, damage 1. Not a good start. Used a command point to reroll damage and got 2. Then a sea of ones and twos, and a single Hellblaster fell. Great. 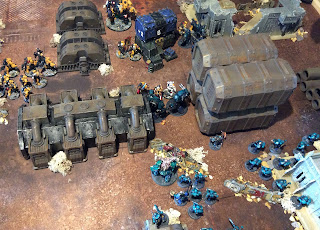 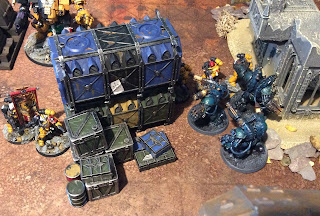 Eager to make amends, the Oblits made the charge and piled into the remaining 'blasters, killing another of them in melee. The Contemptors stomped in. One of them easily removed the last screening Intercessor, and the other punched out at Marshall Rhinehart, but his Iron Halo saved him from damage. His return swings further damaged the Hellforged machine, but not enough to slow it down. 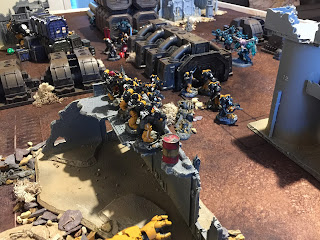 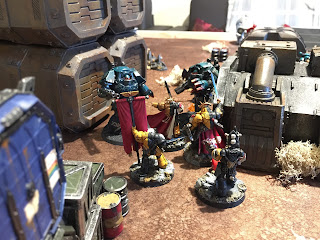 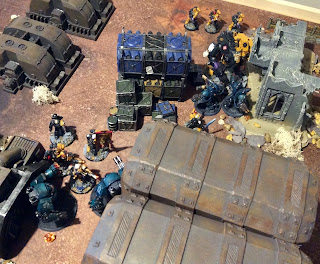 The Crusaders turn two, Aggressors and Intercessors swung around on the left, putting some shots in to the Chaos marine squad on the flank. The Redemptor over there couldn't find line of sight to the Spawn so lent some support to kill off a Marine or two. The other Redemptor blasted the Obliterators after the Hellblasters fell out of combat, then charged in along with a lieutenant. Then the Chaplain piled into the Contemptors. A lot of fighting happened, but not much died. One of the Oblits fell, and they struck back to the Lieutenant, failing to finish him with their fists. 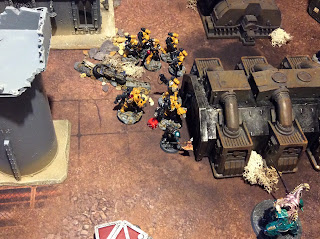 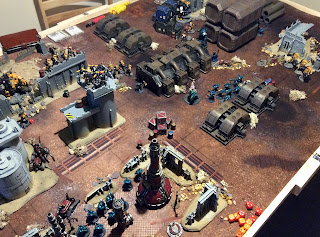 The Prince and the Executioner got bored waiting for the Contemptors to break through and decided to go around to deal with the Aggressors, which, along with the shooting from the marine squad in the middle, they did. The Master of Executions proving brutal, I'll be running him again I'm sure. The Psychic phase was a bust, failing to protect the Oblits with Weaver of Fates among other powers. They promptly died to the Redemptor. 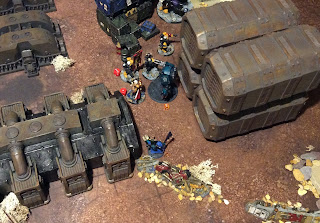 In the crucial fight in the middle the damaged Contemptor finally punched out the Warlord, but with Only in Death Does Duty End, he fought back, crippling it, enough for the Emperor's Champion to cut it down. Then it exploded, wounding all the nearby characters (incuding the Sorcerer, who lucked out, since Hellfire reactors do D6 mortal wounds to psykers when they explode) and the other dread. 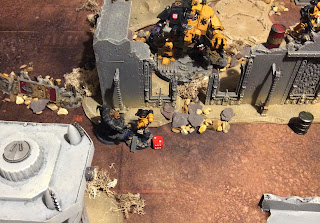 Oh yeah, the Spawn piled into the Company Champion and did some wounds, and were eventually killed off with little fanfare. 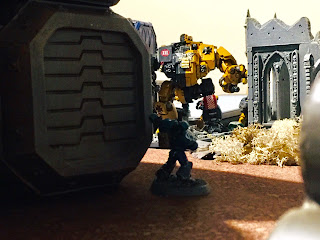 Stig's turn and here come the pain. Shooting opened up, killed off 15 or so Marines, including 8 of the squad sneaking around the side (the champion rolled a 1 for morale so stuck around.) The Master of Executions got the firing squad. With that, I was running low on boots on the ground! 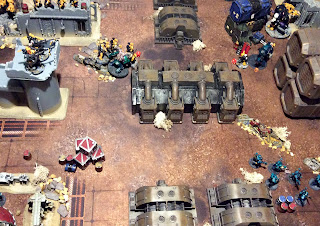 Not much left, so time for the Sorcerer and Daemon Prince to do some work. So the Sorcerer promptly rolled perils and, thanks to the wounds he lost on the previous explosion, exploded himself, killing the Emperor's Champion. The remaining chaos marine Champion from the squad that got removed by the Redemptor supercharged his plasma and killed one of the remaining Hellblasters, and himself. The remaining Contemptor, no longer in melee with the Emperor's Champion, charged in to the Ancient and Lieutenant, both of which were already damaged. It split it's attacks and failed to kill either of them, then they fought back... 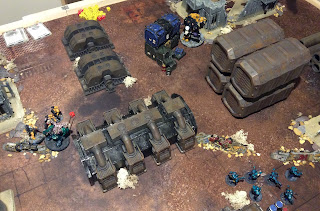 Dreadnought destroyed. Seems like Hellfire reactors are very volatile, because this one exploded and killed both characters. In a kill point game, this was a good trade! On the other flank the Daemon Prince did a good job killing off a chunk of Intercessors.

After this turn I was slightly ahead on kill points, but with only the Prince and two partial squads of marines left, I was running out of resources. 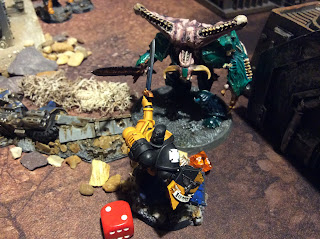 Lots of fire failed to drop the Prince in Stig's turn - but it stuck around on 4 wounds. The Company champ charged in for an epic duel... but got slapped down by the Prince! Another vital kill point. 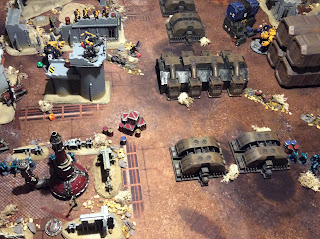 The Prince killed off the Intercessors and the marines with plasma got some lucky long range shots to finish off the Hellblasters. Then Stig's firing line gunned down the Prince, earning Warlord. This all put me 2 points ahead at the end of turn 5, but with only two units left.. A tense dice roll later, and we were going onto turn 6! 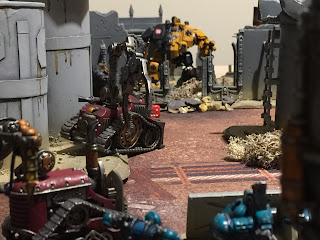 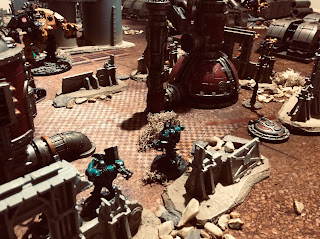 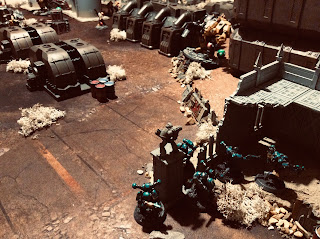 With Stig needing two points for a draw, or to table me for a win, I did the true Alpha Legion thing and had my last two squads run away! The Luna Crusaders gave chase, both Redemptors moved up and opened fire, while the Suppressors bounced into my deployment zone for Linebreaker to narrow the gap to one point. The guns fired, but the Alpha Legion held firm. The game ended. The remnants of the Fractured Truth made their escape. 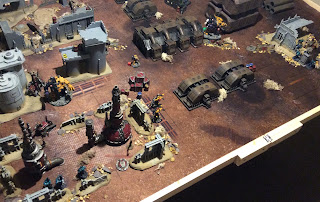 And that was that. A win by the narrowest of margins. The Alpha Legion return to the shadows, while the Luna Crusaders will rue this day. What a game!

The Obliterators whiffed massively, new model syndrome in full effect, though Stig also suffered from it with his Apothecary doing precisely nothing before being squashed by a Contemptor. In the end his many characters and kill points let him down, though mainly due to proximity to my forces exploding. We were also less than impressed with the macro plasmas on the Redemptors, the gatling gun definitely seems the stronger choice to me. I'd considered my list quite friendly - if I was playing more 'competitively' I'd have split the Marine squads and taken a duel battalion, but in this game think the 10 man squads helped to reduce kill points, and ultimately their survival won me the game. I'm definitely not suggesting that Chaos Space Marines are a competitive unit, but as Alpha Legion they are hard to shift and can be relied on to hang back, plink off some wounds, and hold out for the late game.

Hydra Dominatus!
Posted by Redtoof at 19:35