Since Obliterators are now all the rage for Chaos Marine armies, I thoughts I’d get some for the Alpha Legion. I didn’t want them to look quite like everyone else’s, so they have had some conversion work on them to mix up the weapons a bit.

With that done, I gave them a fairly quick and dirty paint job to fit them nicely into the Fractured Truth. Mostly drybrushing and washes, with lots of glowy bits to show the daemonic energy powering them and their weapons. Notably, I made sure the armour and ‘flesh’ ended up looking pretty similar, so they feel more like a creature of living metal, rather than a Chaos Spawn with bits of armour bolted on. I did end up slapping some Hexwraith flame over the armour plates though to both green them up a bit and to distinguish them as daemonic rather than just regular armour. 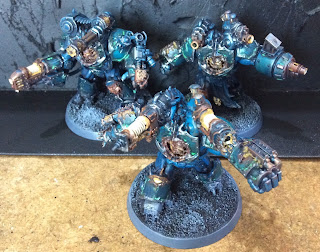 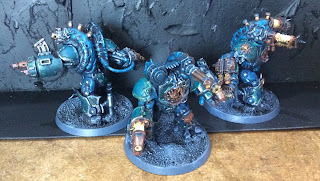 Hopefully this has all done the trick and they look suitably unique and chaosy. Hydra Dominatus.