Adeptus Titanicus at Boards and Swords 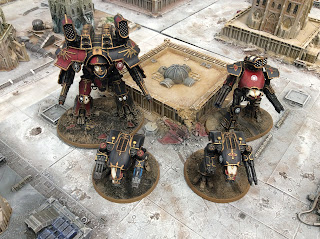 I recently took a trip to Derby, to play Adeptus Titanicus with a couple of hobby legends in The Claw and Gambit. We agreed to meet at Boards and Swords, which for us was a new venue that I'd only been made aware of after seeing a tweet from Andy Thornley having just finished their new Adeptus Titanicus board. I felt that was a good a reason as any to give them a go.

And it's in location.... @BoardsSwords ... Get your #Titanicus on people. Tempted to take commission pieces on now.... pic.twitter.com/flUds9XfDE
— Andy Thornley (@Drunkhammer1) August 20, 2019


Anyway, having not played AdTit for some time, The Claw and I had a little refresher with a Reaver and a Warhound each. It was fairly uneventful, but it turned out we had remembered some of the rules at least! It also looked pretty special on this wonderful board. 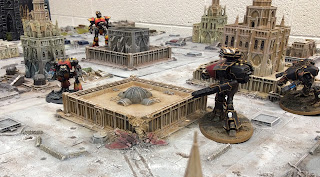 After our reminder game, and Gambit had suitably recovered from the previous night's entertainment, we commenced with the main event - Traitors vs Loyalists. My Legio Mortis teaming up with The Claw's Legio Magna vs Gambit's Legio Gryphonicus. Both sides had a pair of Warlords, and while we had a Warhound each, Gambit took a Reaver. We selected mission cards, granting the loyalists the Retrieval mission, to rescue a fallen Titan's crew in the centre of the board, and us the (considerably easier) objective to Hold the Line. 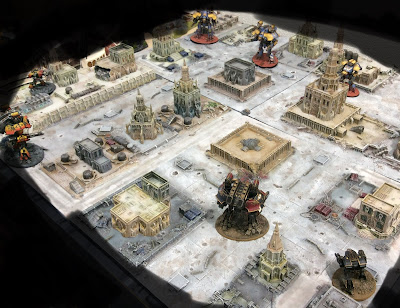 Deployment looked like this. Our Warhounds were on the flanks, ready to do Warhound things, while all the Warlords were positioned to blast each other with little movement required. Gambit's Reaver was ready to rush in and grab his objective. 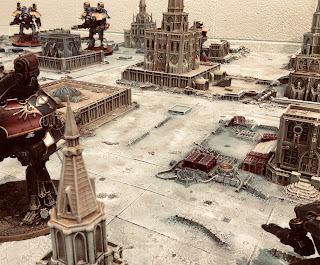 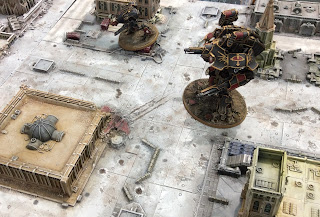 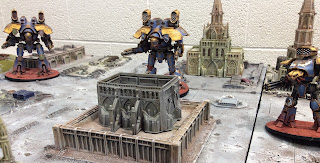 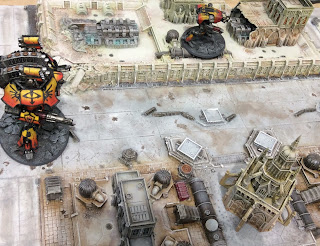 Turn one consisted of trading fire. Not much damage done, though I think we stripped the shields from the enemy Princeps Senioris' Warlord. In turn two however, the War Griffons took the bold move to run the Reaver to the objective and turn away from our guns, with the full stride order in effect to move again... 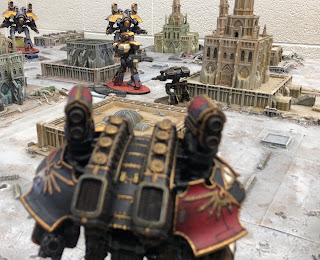 However, that put the Reaver firmly in the sights of my Warlord... 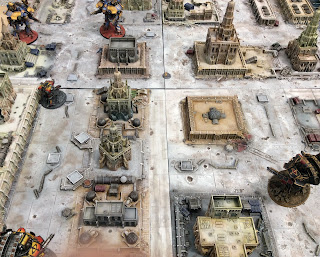 The first engine kill of the day! However, the retaliation was swift and brutal, my Warhound that had been in position to finish off the Reaver if required got annihilated, and the Flaming Skulls 'hound didn't fare too well either. 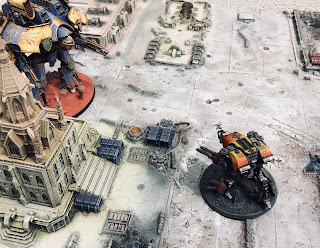 We traded fire and Warlord kills, taking down the Princeps Seniors, but loosing my Warlord in the process. That meant the Death's Heads had no further presence on the battlefield. However with the last loyalist engine boxed into the corner, we were comfortably able to complete out objective and deny our half of the city to the War Griffons. 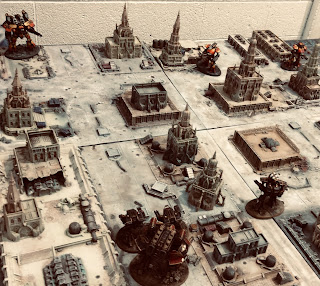 With Gambit sitting out and eventually returning home to paint Warhounds/power nap, The Claw and I played another game. This time I had my full, currently painted maniple against a Warlord and two Reavers. We randomly drew objectives once more, and this time we both had to kill the enemy's most expensive unit as quickly as possible - in this case it was hunt the warlord. 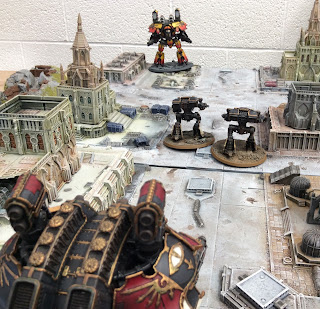 Unsurprisingly the Warlords ended up facing each other, but The Claw's Reavers ended up slightly out of position, while I was able to use mine to draw a bead on the prized foe. First Fire orders caused no damage to my shields, while I got very lucky and stripped all of them off the Warlord with my Reaver. Characterfully, the Legio Mortis capitalised on this weakness... 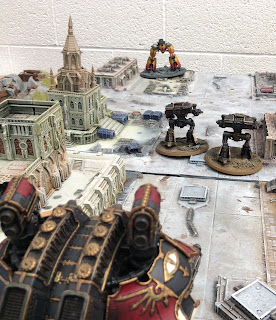 ...blasting the Warlord with my volcano cannons before finishing it off with aimed shots to the damaged legs from the apocalypse missiles.

With secondary objectives still in play, we continued, the Legio Magna Reavers putting some punishing fire onto the Warhounds, stripping most of their void shields. 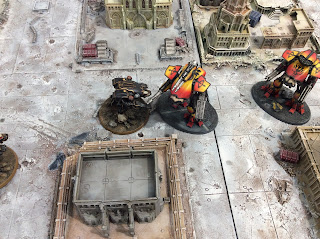 With the reactor running hot, this Warhound ran over to stand next to the enemy Reaver in case of an explosion. It was destroyed, but merely stumbled harmlessly into the larger engine. 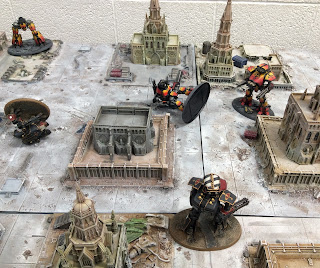 However, the explosions were soon to follow. My Reaver blasted one of it's opposite number with such ferocity that it's magazine detonated, destroying my second Warhound and damaging both the remaining Reavers in the process! 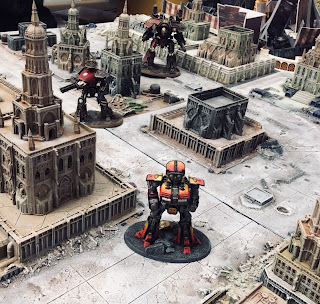 With one engine remaining, the Legio Magna were in a spot of bother. However, my Reaver was hurting, so The Claw targeted it. 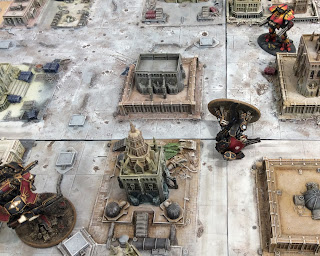 Continuing the theme of engine kills backfiring, the Reaver was destroyed, got the Wild fire result, and pointed itself directly at the enemy that had wrecked it, stripping the shields as it fell. Just in time for a volley from my Warlord to finish the Flaming Skull's resistance, and be the last engine standing! 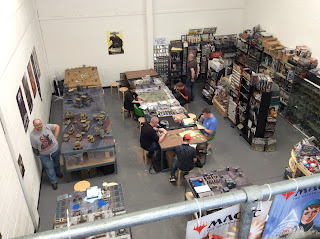 So I think the three of us had a great day. Titanicus is awfully fun, and it's always nice to play with good people, well painted minis and on great terrain. We were also quite impressed with the venue, seen here in part from their first floor section. Plenty of space, staff member was helpful and awesome, and it's really easy to get to from the main road. As an added bonus, Titanicus is definitely a thing there, we saw at least two other games going on (including two other Legio Mortis forces in action!) I'd definitely go back for another go.
Posted by Redtoof at 16:05