After a bit of a hiatus, the Fiery Fowlers have come back to the Bloodbowl field! This time, they returned to the Taylored Games Arena to play once more against Coach George. With a one all record against his various teams so far, this time it was a decider, and the Fowlers were up against the only team in Bloodbowl as hungry as they are - other Halflings!

As is tradition, George's team (let's call them the Greyfield Gobblers) consisted of an unhealthy palid looking group with uniforms matching their skin tone. Obviously they had not been getting their five a day! The 'flings were accompanied by two treemen who at least had some colour to their complexion, but weirdly insisted on saying 'I am Groot' over and over. His team also sprinkled a few of the new Halfling special positionals in there for added flavour - they didn't really do a lot though so that's probably the last you'll hear of them in this report. 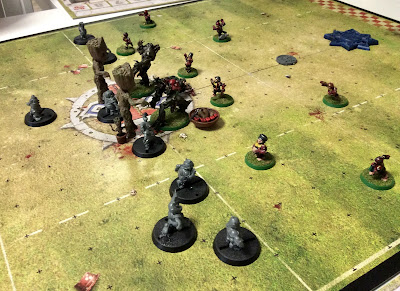 The Fiery Fowlers started with the kick, and we were off! The Greyfield Gobblers quickly retrieved the balls and, amongst ineffectual treemen fights, we prepared for the first Halfling throw of the game. He didn't land on his feet and the ball was soon grabbed by the Fowlers. 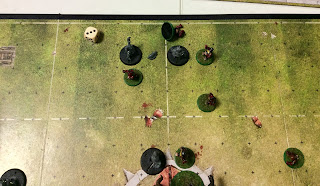 Moving around the flank, we quickly found that it's pretty hard to keep Halflings out of a cage. The ball was dropped and the Gobblers were in position to grab it... 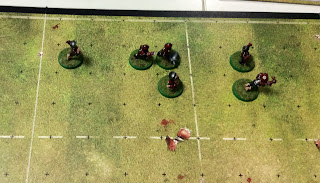 But the Fiery Fowlers are a tough bunch, and in a rare show they out muscled their opposition! Many Greyfield 'flings were flung into the crowd! 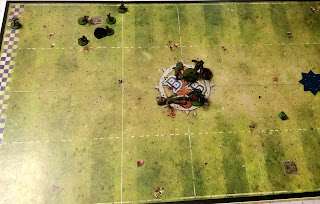 By the end of the drive the Gobblers had almost been cleared off the pitch entirely! Touchdown for the Fowlers, but as is the case with Halfling teams, there are usually plenty of them so there was no danger of the Gobblers running out of players. 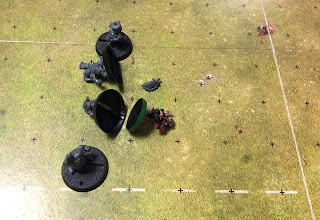 With time running out in the first half, the Fowlers kicked again, and managed to get the ball back without too much trouble. Second Halfling throw attempt saw three of the little guys knocked over and no touchdown. 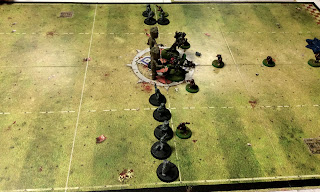 Back for the second half, and the Fiery Fowlers were given the ball. They quickly formed up against a very aggressive Greyfield team for a throw attempt. 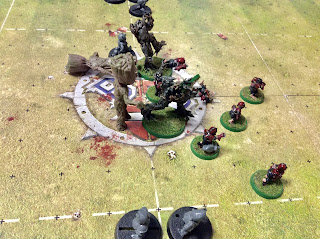 But the tree fumbled, dropping the poor 'fling on his head (even with a reroll!) The Fowlers held position against the Gobbler's advances, ready to try again with another Halfling, but the tree obviously had some slippery branches, because he dropped the Halfling again! 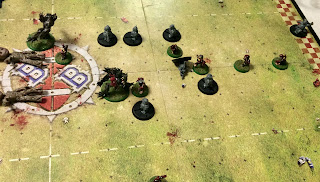 It was enough of an opportunity for the Gobblers, who were by this stage pretty well camped in the opposition half. They got the ball chucked up the field and safely caught. With backup they were able to keep on their feet long enough to get the touchdown. 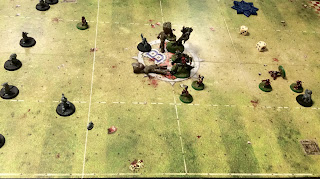 All squared up at one all, and the Fowlers were receiving. The Gobblers formed into the deep 'throw protection' line. They and the ticking clock put the pressure on to force the throw... 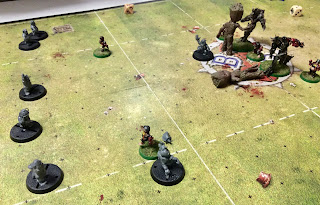 A Fowler 'fling got up the field with the ball, but he wasn't able to reach the endzone. The Gobblers pounced greedily on their chance... 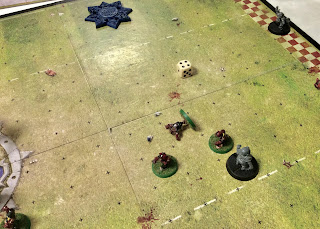 One more successful treeman throw in the dying seconds of the game and the little Halfling went for it as fast as his little feet would carry him, just about making it into the endzone before the whistle. (That four was the Go For It roll required for the touchdown.)

A Win for Coach George and the Greyfield Gobblers, and another loss for the Fiery Fowlers. They are pretty used to it by now, but of course it still left a bitter taste in their mouths. Oh well, I'm sure the after match feast was glorious!

George and I had a lot of fun with this one. Halflings are a weird team to play against, and now we've both had that experience. Most of the standard Bloodbowl tactics go out the window and you pretty much have to rely on punching them and hope the dice don't fall well for their throws. The new GW minis are also very nice, I'm sure they would look good with a bit of paint on them...