As I posted recently, I went to play a couple of games at Warhammer World against Dave from the DZTV community (excellent discord channel for patrons by the way, thoroughly recommend if you want to talk rubbish, see pictures of people's pets and arrange games of 40k), so here is game two! It's Orks this time against the Necrons.

After a hefty lunch at Bugman's and waving awkwardly at Duncan, we didn't want to waste too much time, so we went for the same scenario as before - Cleanse and Capture, Dawn of War deployment.

My list was essentially the selection I took to the Rynn's World narrative game, plus some Boyz. It was a Battalion, a Vanguard and a Spearhead:

Dave took mostly the same units as before, but swapped a few of the big guns out for a super heavy - the Obelisk. Never faced one before, apparently it has supercharged tesla guns... 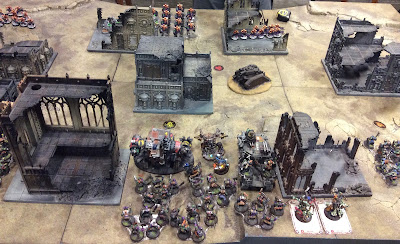 Here we are deployed. not pictured are Tomb Blades on the right flank, Tankbustas in a Wagon and the 10 Boyz on the left flank and the Obelisk ready to teleport in!

Necrons got the first turn, but as was tradition at this point, the cards didn't give many points. The Destroyers had a good go at blasting the Battlewagon carrying the Nobz, reducing it down to 4 wounds, but otherwise I was largely unscathed.

In my turn one, the Orks shoved forward where possible, and I got an achievable objective - to defend one that a big boyz mob was standing on. In the Psychic phase, I noticed a nice gap Dave's Immortals had left by moving forward... 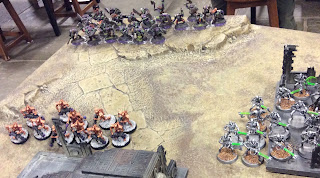 Da Jump went off on the other big boyz mob. Some incidental shooting happend, then we went onto the charge phase... 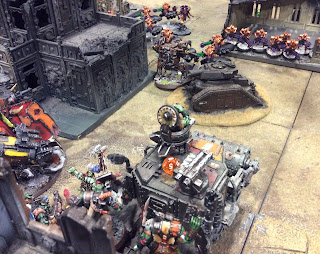 The Deffdread used Ramming Speed to charge into the Destroyers, killing a couple (not enough really). The Boyz on the far left were the real disappointment however, failing the charge on the Immortals AND the Warriors. The Necrons of course promptly turned around and removed them. 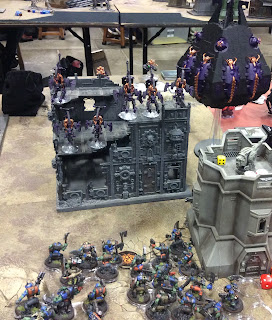 The other big unit of Ork Boyz were casually defending the objective, when a bunch of tesla Tomb Blades, and a floaty tesla death brick appeared. They were also removed. 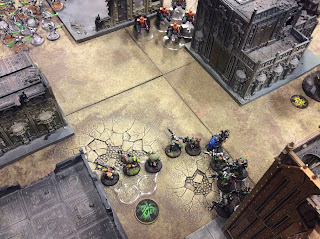 Destoyers broke the Tankbustas' wagon, and some extra shooting stripped down the 10 man Boyz mob to three. Ouch! On the plus side the ones that disengaged from the Dread somehow failed to kill it. The Boyz had taken a battering in turn 2, but the Necrons didn't earn many points from it, so I was still in the game. 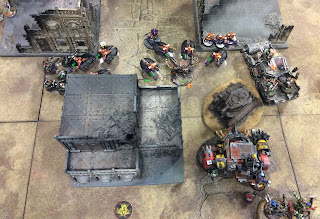 Continue where we left off. Not much from the cards again, so we pushed forward and got stuck in. Shooting from the Gorkanaut and a ramming from the Battlewagon killed off a good chunk of the Immortals, and the Tankbustas and Deffdread chipped a few Destroyers away from the two units. Again, not enough thanks to Reanimation Protocols. 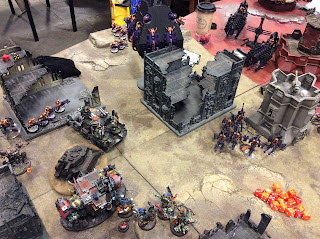 Turn three I think was another bad card draw for the 'crons, but they killed off some more Orks and may have picked up the odd point. The Deffdread, the Tankbustas and the last Battlewagon were all removed, the latter disgorging a mob of Nobz who played the Loot It! stratagem to get a 3+ save from the wreckage and become effectively Primaris Orks. 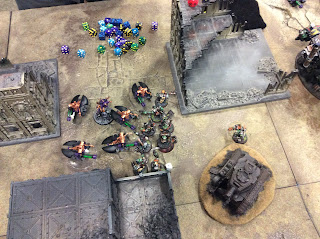 With most of the Orky assets gone, I got a good draw. Overwhelming Firepower, Give it Sum Dakka and Assassinate. That meant I got two points for killing the remains of the Immortals in the shooting phase, before the Nobz piled into the Destroyers and their Lord, killing him but sadly leaving one Destroyer intact (even after spending CP to fight again). Three points was a big swing, I think putting me into the lead. However, more importantly from the Orky perspective, the Gorkanaut charged into the Obelisk, stripping 10 wounds off it. 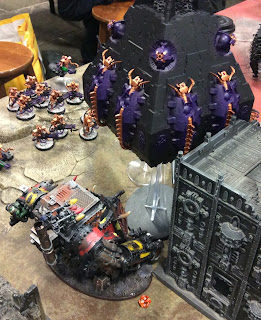 Turn 4, the Destroyers turned their guns on the Nobz. Being tough old Snakebites, they took a fair bit of killing, but the last one was eventually scoured from the battlegrid. Elsewhere the Tomb Blades were having a go at beating up my characters, with limited success. The Obelisk floated away and took some wounds off the Gorkanaut, leaving it on it's middle bracket.

With the death of the Nobz, my chance of stealing a win was pretty much gone, but there was still a big brick of death to kill, so we made that the mission! 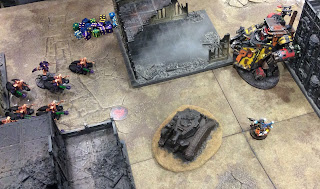 The Gorkanaut, Big Mek, banner Nob and Warboss Redtoof charged in, and smashed away at it. Redtoof tore big chunks out of the living metal, but in the end I think the Big Mek gave it a hefty clang with his spanner to finish it off. I think Dave had one command point left, so he obviously used it to re roll the explosion result, and got a six! The Nob perished, as did Redtoof, previously hurt by the Tomb Blades. That was slay the warlord which, regardless of consistently poor cards, put Dave in essentially an unassailable lead. So that's where I conceded. 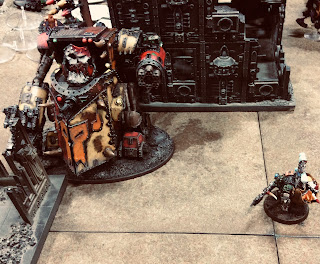 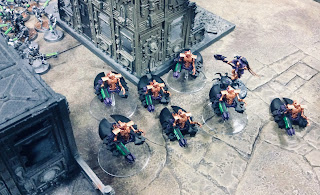 The Gorkanaut and the Big Mek - all that remained of the Ork force, facing down against most of the Destroyers. I think I must have killed enough over the course of the game to wipe both units, but Reanimation Protocols is a thing, and it really kicked in during this game! When your shooting is so unreliable, it's hard to ensure you kill off whole units, which is obviously the optimal tactic for fighting 'crons.

In any case, it was another fun game. It's always good when Orks do some krumpin', even if they get beat up as well. The Necrons won, but of course, Orks is never beaten! We can always come back for another go!