Back to the time of the Horus Heresy for some more Adeptus Titanicus stuff! Firstly, I got a few cute little mini knights! These are cool little models, but a bit fiddly, and I relied mostly on drybrushing and washes for them. I went with the House Malinax scheme partially because it ties in visually with the white-ish heads of my titans, while contrasting with the rest of the scheme, but mostly because it's got a cool scorpion transfer. 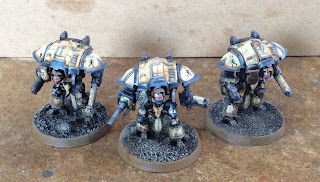 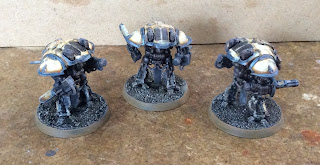 I'm not sure how much good three Knights will do on their own on the tabletop, but they seem fun to have running around supporting a proper titan. Speaking of which, here is Reaver number two... 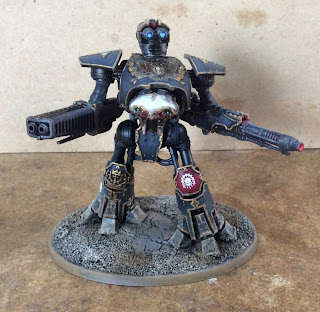 I'm pretty pleased with this one. I followed the same steps as before, but with the benefit of experience this one was easier than the others. I deliberately took the more extreme approach to my 'mostly black' scheme than the Warlord, who ended up with a lot of red, so as not to distract from all the bonus bling on this kit. 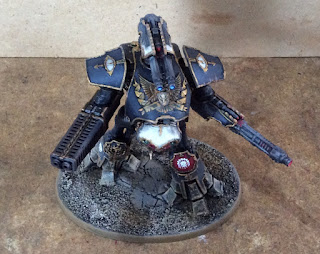 In particular, I had fun painting that crest on the carapace - there is a transfer under there, partially covered by washes and silver chipping over the decaying gold. 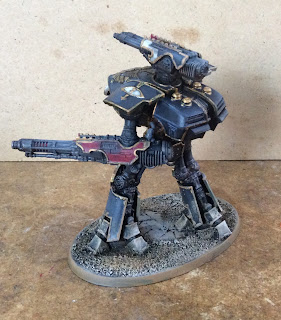 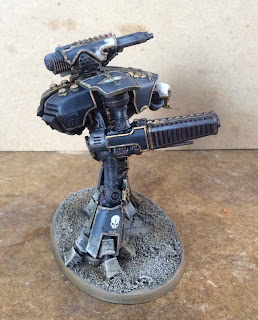 As with the others, the weapons are magnetised to allow different load outs. I'm particularly happy with the chainfist and the extra weathering on it. Sharp eyed readers might note that the chainfist is built to be left handed, while the powerfist from the other Reaver kit was built right handed... 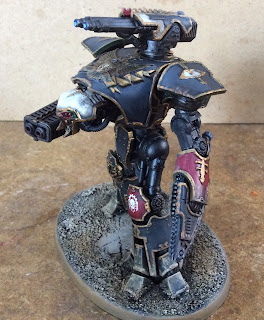 And here are the new Knights alongside the two Reaver brothers, including what must be the coolest looking set up - twin melee weapons and a turbo laser destructor for a hat. I think the pair ended up looking rather cool together, a nice contrast between the more aggressive looking red carapace striding forward and the passive, uncaring black one standing back to blast the enemies of Legio Mortis. 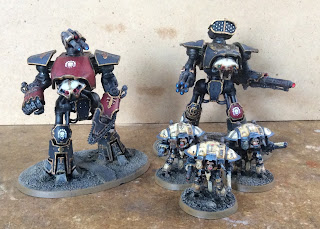 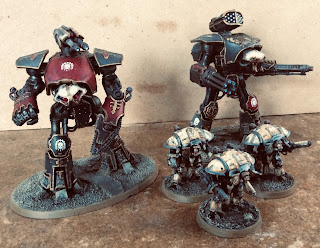