I recently took a trip down to Warhammer World to play a couple of games against Dave, a fellow DZTV patron. Dave brought his Necrons, and I took 2000 points each of Orks and Ad Mech/Knights.

In the first game of the day, the forces of the Imperium from Explorator fleet Helios, took on the Necrons using the Mephrit Dynastic code in a classic matched play, 2000 points, Dawn of War deployment, Cleanse and Capture mission. (That's Maelstrom, 3 cards a turn, every turn.)

I know Necrons aren't top tier competitive at the moment, but this looked like a reasonably beefy list to me. Luckily I'd brought some firepower. My list consisted of a Ryza battalion and a Taranis super heavy detachment. Lady Helena was the warlord, piloting the Knight Valiant 'The Defiant Flame', taking the Ion Bulwark trait and the relic the Armour of Sainted Ion. 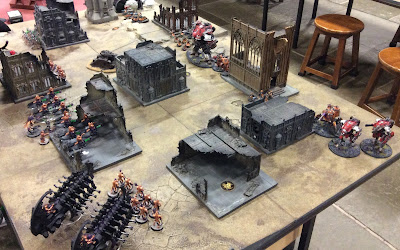 Deployment started with me plonking down the Valiant right in the middle, and Dave aiming all the big guns in his army at it. A decent amount of Large, Line Of Sight Blocking Terrain meant that we were both able to largely hide our respective destroyers. I put my remaining vehicles with big damage weapons on the flank to hunt the DDAs, largely forgetting that quantum shielding is a thing. Dave finished deploying first, and there was no seize, so the Necrons went first. (And the AdMech immediately starting chanting a Shroudpsalm.) 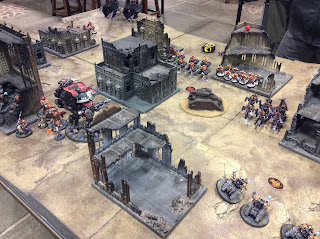 The Necrons got into position and opened up across the lines. Extermination Protocols were used to put some hurt on the Valiant, which soaked up the majority of the firepower. It was dropped down to 12 wounds, and degraded, but still very much a threat. Elsewhere the canticles of the Omnissiah saved most of the damage to the rest of the force. The card gods were not kind (a bit of a theme of the day) and Dave started with zero points. 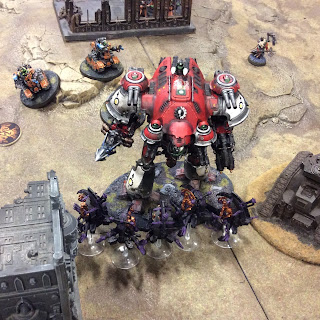 In retaliation, the Adeptus Mechanicus formed up their gunline. Elimination Volley, Binaric Override and Plasma Specialists were spent to make the Kataphron Destroyers and the Kastelan Robots into killing machines. Between them and the Onager a full squad of Necron Destroyers and one of the Doomsday Arks were destroyed. The Conflaguration cannon also crisped a destroyer from the other unit, before the charge phase ensued. I had drawn a card that required my Knights to get into combat, and all three of them did, though they didn't really do much after that - Lady Helena failed to crush any of the Tomb Blades, while both Armigers sliced a couple of Immortals from the Gauss squad, only for them to get back up. I got D3 points regardless, and rolled a one, putting me 2-0 up. 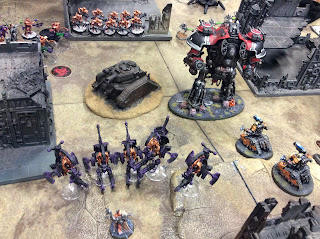 In turn two, the Necrons were on the back foot, but they were not done yet. The Assassination card was drawn, so the Tomb Blades lined up a firing squad around the Enginseer and everything else pointed their guns at Lady Helena's Valiant. Lots of dice were rolled, including plenty of Taranis 6+ saves by me, but in the end... 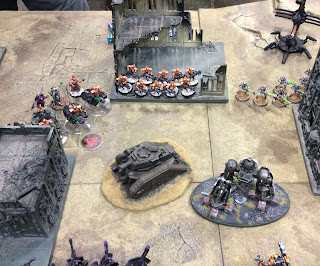 The Valiant was destroyed. It took pretty much the entire Necron list to do it though, including the remaining Doomsday Ark which had been eyeing up the Onager. I had to reroll a die to ensure it didn't explode, so I could attempt to play Our Darkest Hour, and bring the venerable machine back to it's feet. Sadly I failed the 4+ roll required by the stratagem, and unable to reroll a second time in the phase, Helena was forced to eject. 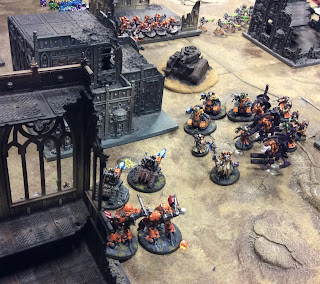 Amusingly enough, the Enginseer survived the Tomb Blade's volley, and in my turn I set about surrounding them. I had drawn a card that required me to clear my deployment zone, and those pesky Tomb Blades were in the way! Speaking of in the way, there was a big building between the two sides' Destroyers, so I had to move around a bit and split my fire between the DDA and the immortals. 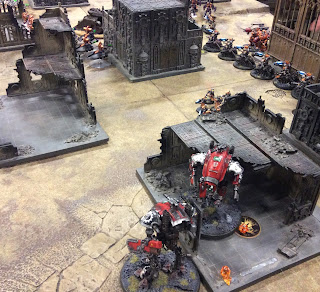 Doomsday Ark destroyed, and the Armigers finally removed the Gauss Immortals, but my mob of characters plus the Breachers and Vanguard failed to take out the Tomb Blades, denying me any points. 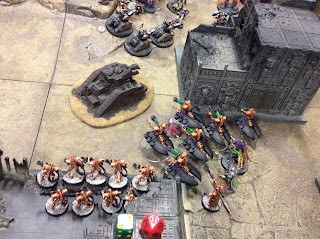 The Necrons were losing assets, but at this point (turn 3) were in the lead 3-2. The cards didn't help much though, so it would stay that way for the time being. The Destroyers exterminated the Breachers, while the last Tomb Blades flew away to hide and deny me clearing my lines. 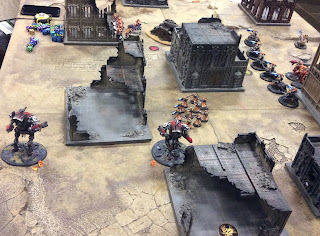 I think I drew Witch Hunter at this point, so it was just operation kill stuff. The noose closed around the Necron forces, before the Destroyers reached out and blasted away the last of their Necron namesakes, as well as removing the Pylon. The Kastelans, not to be outdone, eliminated the warriors. Apart from the rogue Tomb Blades, who refused to die, the Necrons were restricted to a very small castle around their characters. 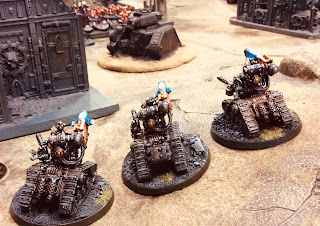 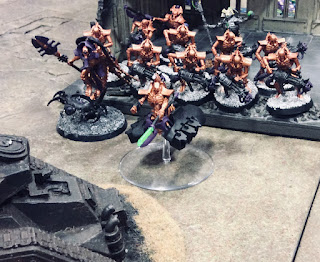 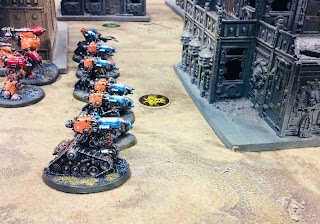 With the majority of their forces depleted, the Necrons got sneaky... 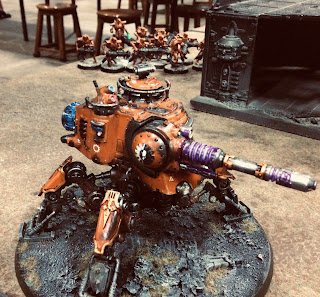 Dave drew Big Game Hunter, and used the Veil of Darkness to move the Destroyer Lord and the Immortals over to target the Onager, while being well out of line of sight to the Kataphrons or the robots. They stripped wounds off it, degrading it, but not destroying it. 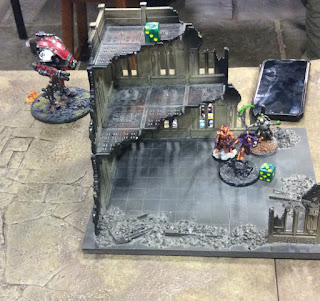 While the rest of my army wandered around the terrain to try and draw a bead on either the Immortals or the Tomb Blades, one Armiger was tasked with hunting the Necron warlord and his retinue, for lack of any better objectives. (Psychological Warfare wasn't looking likely!) 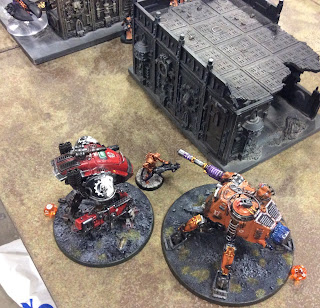 The other Armiger went over the assist the Onager against the Immortals, who stubbornly refused to die. Thanks to poor card draws and this one Immortal in my deployment zone, if the game had ended on turn 5, it would have been a Necron Victory, against all the odds.

Luckily for me, the game continued, the Necrons failed to kill the Onager and for once I drew a decent card - Area Denial, scoring D3 points and finally putting me ahead. At this point Dave conceded, with one Immortal and a handful of characters he wasn't looking like getting back into the game if there were a turn 7.

We both agreed it was an excellent game. The Necrons took a beating but remained in the game all the way till turn 6. The cards were amusingly against us both, at one point Dave picked up Priority Orders Received - Domination, which, unless you have six warlords is just about as impossible as it gets. I know a lot of people hate the Maelstrom cards for this reason, but I think for this game it really made it interesting. Most Eternal War missions would pretty much have been over by turn two in this case, and here we were, with the Necrons almost pulling off a steal of a victory!

Anyway, thanks to Dave for a great game. Keep an eye on the blog, as there is another report coming soon when the Orks take on those sneaky robots!
Posted by Redtoof at 20:04