First post of the new year, and it looks a bit like 2018 again, because it's me against formerly regular opponent John and his Emperor's Children. The last time we played 40k it was on the same side back in March in another Chaos clash. Both games were played at Grim Dice's Friday Night Gaming, but since March they have moved into their new store in Grimsby. This was my first visit into the store, and I was impressed with it. Bright and spacious with plenty of tables and, of course, stuff to buy.

John and I, as well as several of the old gang who have appeared periodically in this blog, are playing in a tournament at Grim Dice on the 18th of January, so we thought we'd have a game to try out the armies we were considering. Partially due to new toys in Faith and Fury, we are both bringing Chaos Marines. The tournament is at 1250 points on 4x4 boards, using ITC rules but without the normal ITC secondaries.

I took the Fractured Truth, my Alpha Legion warband. My list consisted of a battalion and a spearhead, and was built mainly around buffing up the Slaanesh Obliterators. In fact, for convenience, everything in the list is rocking the mark of Slaanesh.

John of course had the Emperor's Children, with a battalion and a vanguard...

HQ: Jump pack Lord (F&F Warlord trait and relic - he had bonuses on the charge and could not be overwatched), Sorcerer (Same powers as mine), Dark Apostle (Same as mine)
Troops: 18 Noise Marines (All sonic weapons), 2x10 Cultists
Elites: 2x Sonic Dreadnoughts, Contemptor (all lascannons)
Transports: Dreadclaw

We were playing a mission with three objectives, where there is a bonus point on offer if you hold the central one and the one in your opponent's deployment zone. 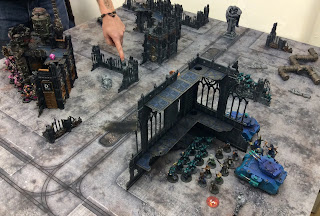 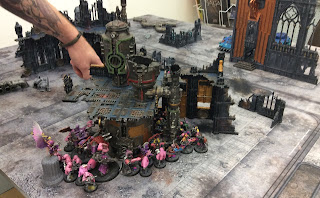 We set up like this - thanks to ITC ruins (ground floor walls block line of sight) we both hid a large potion of our armies behind the terrain. John spent a bunch of CP on combat drugs and fun stuff. His Noise Marines ended up toughness 5 and on the first turn everyone within 6 inches of the Dark Apostle could reroll failed wound rolls. He also kept the Dreadclaw off the board with a Sonic Dreadnought in it. I left the Obliterators and the Terminator lord off the board, intending them to strike at a weak spot later in the game. John took first turn and I opted not to seize, intending to use second turn to ensure I could hold objectives at the end of the round. 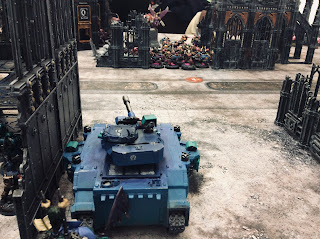 John came out of the gate guns blazing. Looking like he was going to splurge his CP, I activated the Hydra's wail to hopefully cost him more. I think it ended up costing him an extra command point, but it had an amusing psychological effect. I also prayed at the Predator in the open, making it -1 to hit. The Contemptor still managed to rip 7 wounds off it, and the Noise Marines finished it off, though the didn't quite remove the Marines who were in pointlessly sitting in cover. (We played the small ruin sections as barricades rather than full ruins.) I spent 2 CP to keep the remaining two around in order to grab the central objective. 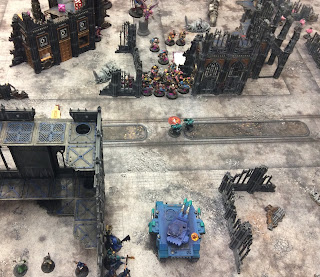 The Las Predator moved out and shot the Contemptor, but failed to kill it. No Obliterators yet so I had limited shooting and failed to secure a kill. My two remaining marines jumped on the centre, while the other squad used a stratagem to mysteriously disapear, in order to turn up next turn alongside the Lord/Oblits.

I scored some points, but I hadn't reduced the firepower coming at me... 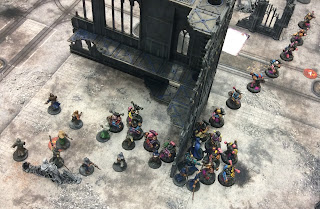 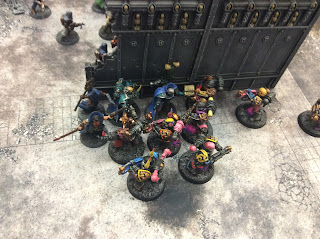 The Predator fell swiftly, along with the two marines (who did at least stick around long enough to stop John shooting my characters with lascannons). The Dreadclaw remained off the board and the culstists held back to screen out my deep strike, while the Noise Marines made a long charge (thanks to a sneaky stratagem to automatically get a 6 on one of the dice) into both my buffing characters and the cultists on the objective. 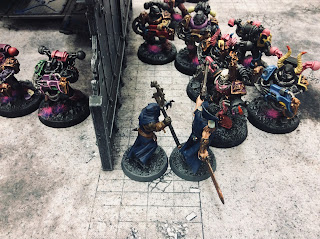 When the dust settled, it was just the two Dark Disciples left alive. Things had not gone well! 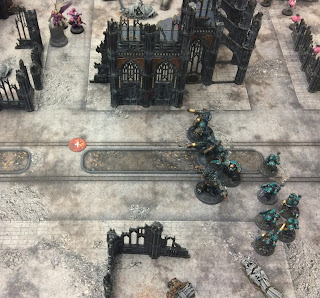 Time for the Obliterators to do some work. They popped in through the warp, backed up by the Lord and those Marines, and targeted the Noise Marines that were strung out over two objectives. As you can see, they killed enough of them to ensure they would all run in morale, but in the process the dying Emperor's Children killed the two Dark Disciples on my objective and a few of the Chaos Marines. They also failed the charge onto the few remaining on the central objective, leaving John holding more and me holding none. At this stage, not only was I up against it in terms of what I had left, but John was way ahead on points. 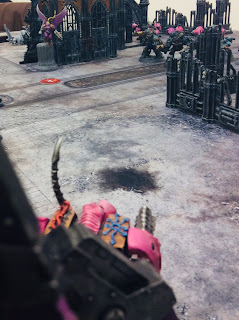 To make matters worse, the pod arrived, sat on my objective and disgorged a Sonic Dreadnought to blast away at the Obliterators. 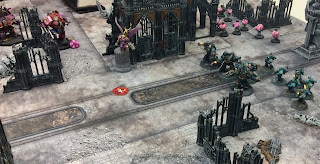 Not many targets left for John, so everyone lined up shots on the remaining Alpha Legionnaires while the Lord flew up to charge in with his thunder hammer. He made it in, but after all that I still somehow had two Obliterators (and a Chaos Marine champion). 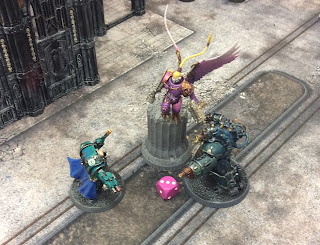 Without having enough command points to break out of combat and still shoot, it turned into operation: Punch the Chaos Lord. Mine came charging in, holding an objective along the way, but failed to get enough damage past the invulnerable save and Delightful Agonies. I lost another Oblit in response. Elsewhere the last marine died a dignified death to overwatch while charging cultists. 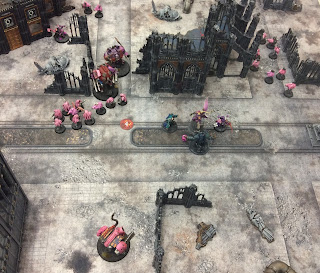 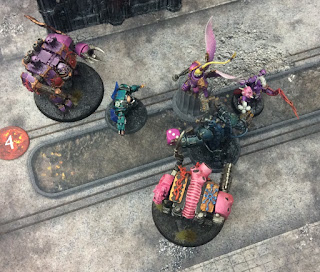 At this stage it was just a case of closing the net on my last models. They held on gamely against the dreads, leaving the Lord to finished them both off with split attacks. I had one CP left to reroll a single invulnerable save on my Lord, but failing a second time meant he got splatted with the thunder hammer.

Ouch. That was a pretty brutal game. I won't pretend these lists were hyper competitive, but there were some definite teeth on display! As always the quad-las Contemptor is a beast, and the Slaanesh 'Smash Captain' was a bit of a monster as well. I was well aware of how nasty a big blob of Noise Marines could be, but with the F&F buffs they can be even meaner. At one point they were -1 to hit, toughness 5 with a 5+ 'feel no pain' save, causing me to dub them as followers of Nurgle. It helped that John rolled uncharacteristically well during this game. We joked that he had foolishly used all his luck up before the tournament! Perhaps that was the Alpha Legion's plan all along!

That said, my Obliterators proved very powerful, and I'm sure my biggest mistake was leaving them off the board. If I had them on turn 1 they could have popped out and removed the Noise Marines in retaliation for the Predator, and I'd have been able to buff them up with spells and prayers. Not to say I would have won, but it would have possibly been a trade off in my favour on turn one, and made a game of it. Ah well, lesson learned.

I've already had some thoughts on how the list might progress for the tournament itself (I might squeeze a Contemptor of my own in there), and have no fear, I'll definitely be posting a report of the event.
Posted by Redtoof at 20:24