You may have seen in my last post, I've been updating my Seraphon/Lizardman army. This week I have mostly been painting Saurus Warriors: 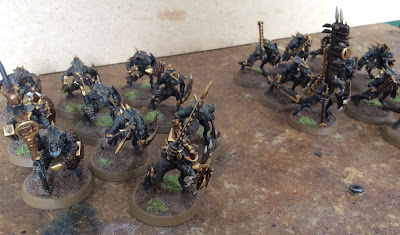 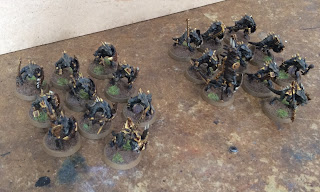 Here we have two units of ten each to add to an existing unit of 20, which will allow me to fill out one of the battalions if I fancy it. It's also some little units that can be summoned by a magic frog if I go down that route. I think they turned out ok, but these guys were a bit of a chore if I'm honest. They are a somewhat elderly kit now and looking at them compared to the Saurus Oldblood on the Carnosaur they look a bit too goofy and not particularly threatening (I can't help but imagine them walking with the Argonian walking animation from Morrowind). Like the Cold Ones, they are a bit uninspiring, so I'm glad they are done.

As with before, I'm not sure how I painted up the first batch, so they aren't quite perfectly matched with their older comrades, most notable in the brighter gold. The difference is more apparent here however as the big unit is still on the old bases. I don't currently intend to rebase the entire collection, it seems a lot of work for an army I'll probably not use much, and very unlikely to take to a tournament or anything. At least it's an easy way to tell the 20 strong unit from the others! 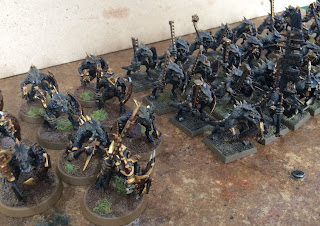 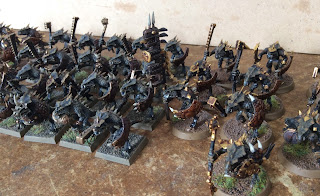 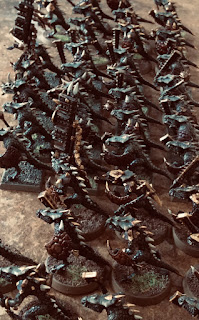 At a glance though, aside from the wider formation in these pics, I think they'll pass. Which is good because I'm ready to move on and paint some big dinosaurs!


To round this post off, I put together a selection of the updates from this one and the last, and took some more photos. I think as a cohesive army, they are starting to look pretty cool. 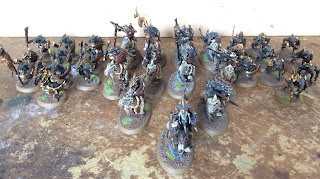 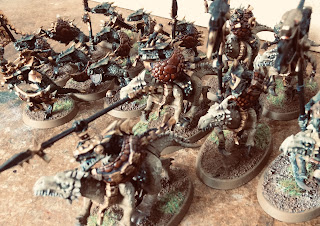 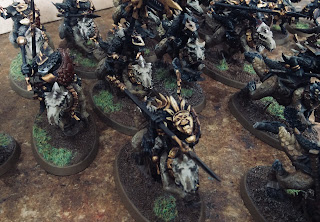