Quite some time ago, I decided to branch out into Warhammer Fantasy with a Lizardmen force. I played precisely zero games before Age of Sigmar came along. Now I have a Seraphon force apparently. They have been fielded in infinitely more games in AoS - one, and that was way back before the game even had points! They also occasionally get a gig as kobolds or Lizardfolk in D&D. What I'm saying is these cold blooded guys don't get out much, which is a shame, because I think they are cool (one for Stylus) and I'm very pleased with how they turned out.

So, here they are: 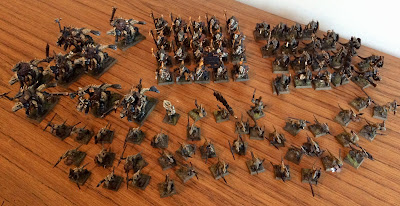 It's a small force, but it's got a good chunk of core units that I can expand upon at a later date if I get into playing AoS or even old school Warhammer. I don't really know how Sigmar works, so I've no idea how much would be needed to get to a 'normal' army, perhaps one day I'll grab the not-codex/not-chapter approved and work out how many points it is. 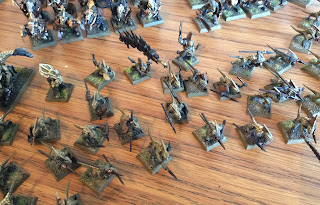 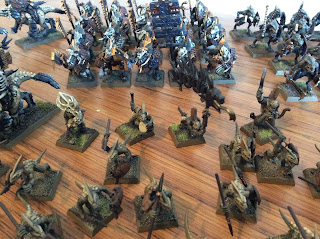 Skinks! I do love these little guys, especially the old metal characters. The skull-headed priest is my favourite of the bunch. They are a nice sandy colour for camouflage in the desert or sun-drenched plains, but I couldn't resist giving them slightly orange crests, which I tied in to the colour of their shields. 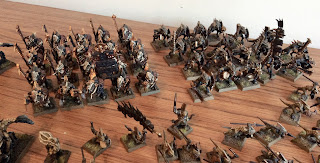 The big blocks of Sarus and Temple Guard are a kind of dark grey/brown colouration that was inspired by monitor lizards. Painting the Sarus was a bit of a chore to be honest, but not as much of a chore as ranking them up! Thankfully no need to do that for AoS! The Temple Guard were a bit more fun thanks to the skulls and all that lovely gold, which required a soothing wash with the venerable chestnut ink. 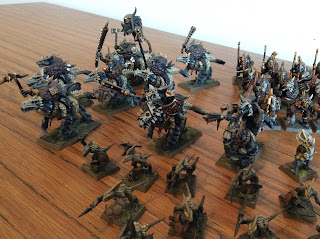 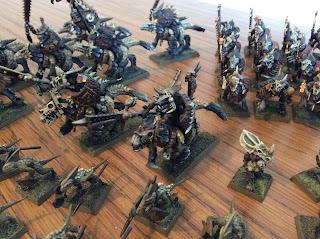 It's no secret that the Lizardmen Cold Ones have always been a bit rubbish, and lag behind their much cooler Dark Elf cousins. I did my best with them to make them a bit unique, giving them feathers like the dinosaurs they are, and converting up a couple of Skar Veterans to lead the force. Again, not having to rank them up does make me appreciate the models more. 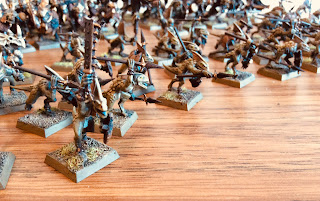 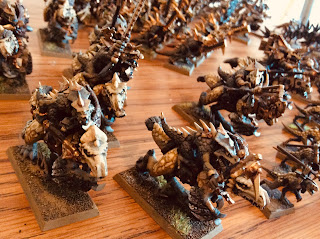 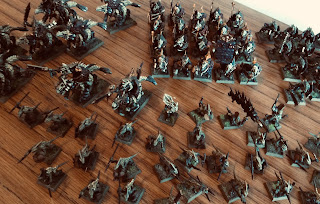 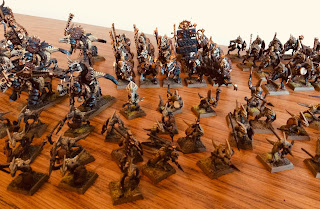 So there you have it. I do really like this lot, and I'd love to use them sometime, but I don't really have the opportunity at the moment. I might still expand the force as a painting/modelling project anyway, I think I've got enough little things, and I'd be looking to get a few big dinosaurs and maybe a magic frog.