Back with more lizards/dinosaurs. As promised in the last instalment, this time it's the final two models, the Saurus Oldbloods on foot and on Carnosaur! 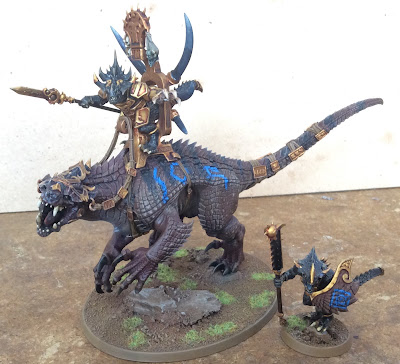 There they are! Both from the same kit (though not literally the same kit - the one on foot is mostly spare parts from the set that built the Troglodon) and, similarity in pose aside, there is a lot of nice differences between them beyond what they're sat on. 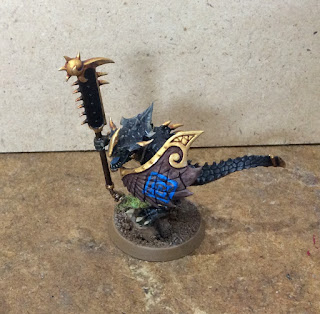 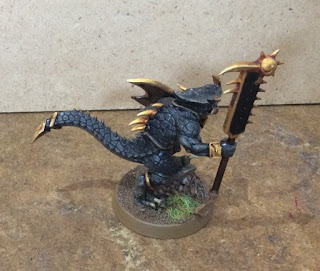 Let's look at the Oldblood on foot first. He's painted in a fairly standard (though slightly more effort) way for one of my Saurus. He did get a splash of blue on the shield to mark him out as a leader though, and I put some extra work into actually painting the teeth rather than letting washes do it for me! 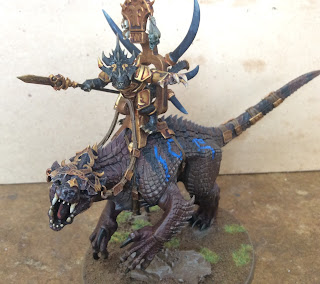 And now the big boy (or girl?) - the Carnosaur with the Oldblood on the back. One lovely model, but a bit of a pain to paint! As with the other Oldblood, I felt a little bit of blue was in order to break up all the brown, so the dino got some warpaint on it's flanks. 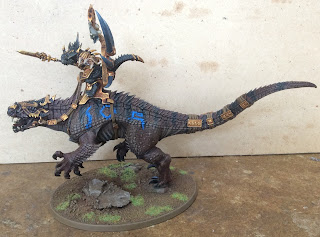 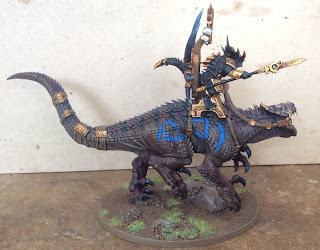 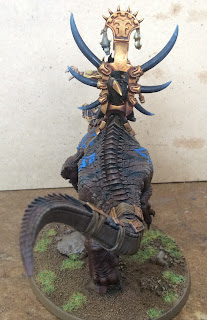 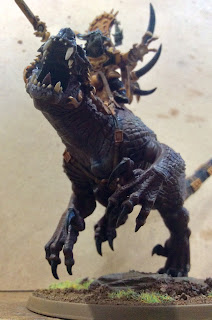 The Carnosaur, as with the Troglodon, received a lot of drybrushing and washing. I opted for a slightly reddish brown, for some reason in my mind that was 'T-rex colour'. I was originally going to go more red or even orange, but I don't think it would fit with the somewhat muted scheme of the army. I was also keen to make it stand apart from the Trog by being significantly darker, which had the disadvantage of making it look a bit less eye catching, hence the warpaint. 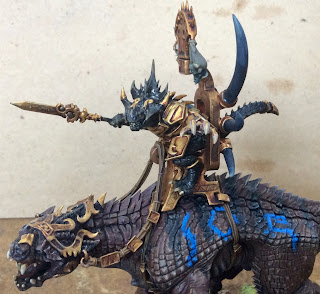 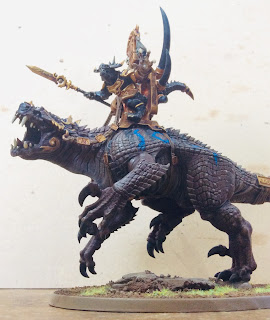 The Oldblood again is pretty standard, though with a load more gold. I deliberately made the gold of his armour a bit brighter and with more depth than the slightly faded look of the throne. There's a few other extra details on this one over the walking one as well, extra armour plates and the sunbolt gauntlet, which I did a bit of a source lighting style glow for. Unfortunately the gauntlet is pointing down so you can't really see the palm unless you are looking for it.

So there you have it. The Lizard Lockdown project is complete. It took a bit longer than I thought it might (thankfully), and now I think I have around 2500 points worth? If I'm lucky I might be able to play a game with them this year, but who knows? Anyway, here's a couple of photos of everything I've done in the past few months. Next time I'll be showing some pictures of the completed army as a whole, including all the old square based lot. 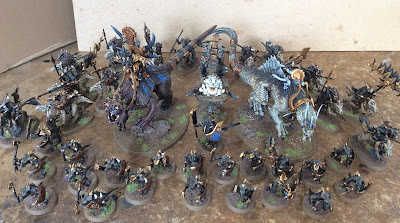 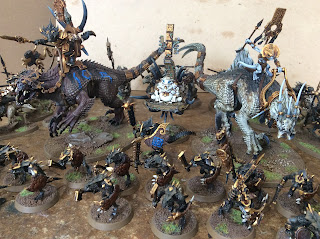