Ghaz and Dave - the Warlord and Deathskull Stompa!

Hello!
Follow up from the last entry, I saved the big boyz to the end. The Warlord himself, Ghazghkull Mag Uruk Thraka, and the Lord of War, the 900-ish point Stompa, affectionately known as 'Dave'. 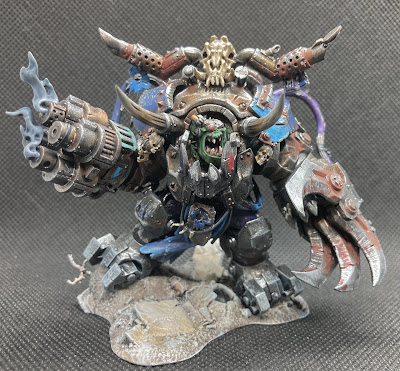 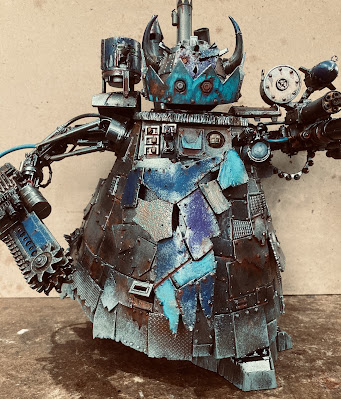 Let's look at Dave first. As with the others I went for mostly bare metal with some splashes of blue, and I opted for a more ramshackle look with lots of rust and different blue-ish colours to contrast with that. 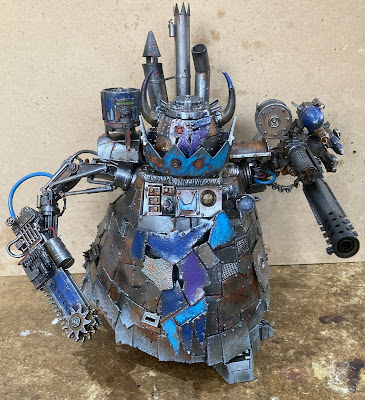 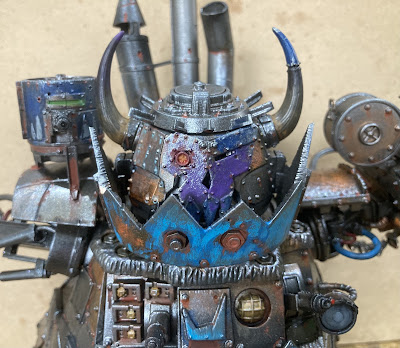 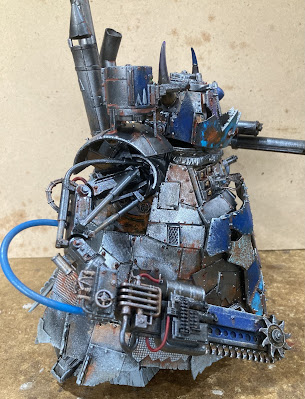 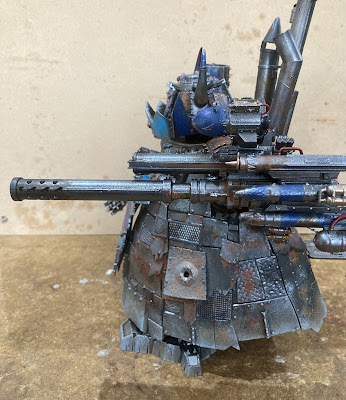 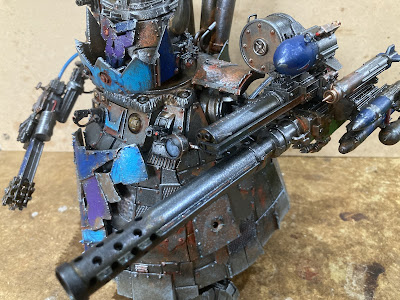 I had a lot of fun with weathering on Dave, using a sponge for paint chips and soot, and some rust weathering powder mixed with water to go in the gaps and streak down from rivets etc. 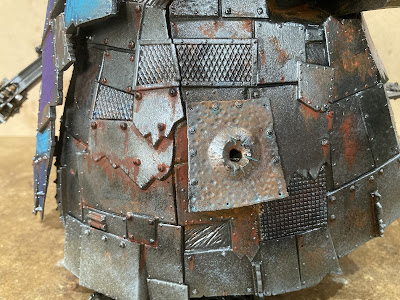 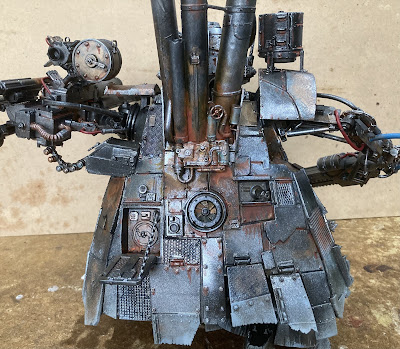 Dave also has magnets, so the arms and head can be removed for transport: 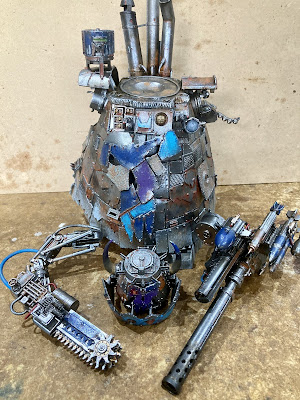 I also took the opportunity to put Dave alongside my own Stompa, Da Toof Krusha, painted years and years ago. While I do love the slightly cartoony charm of mine, the improvements in my dirty rusty metal techniques are quite considerable. Also mine is being ridden by a grot with a hammer, so that's something. 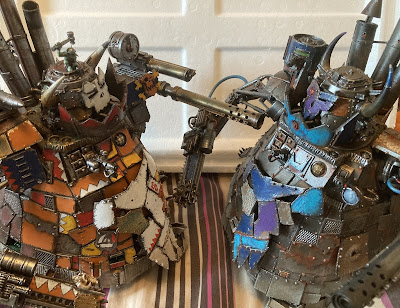 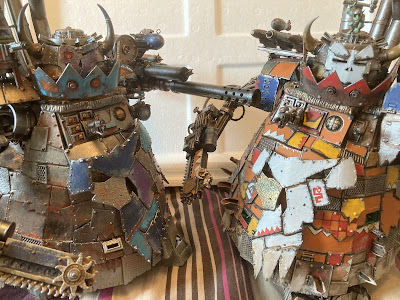 So speaking of technique improvements - I put all of that sponging experience into painting Ghazghkull to go alongside these Deathskull gitz. Obviously Ghaz is a Goff, so he's not going to go around covered in blue paint, but he might use a few 'borrowed' bits from his new allies. 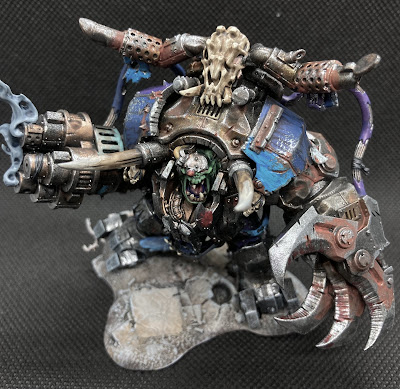 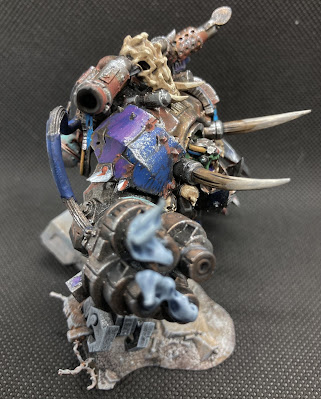 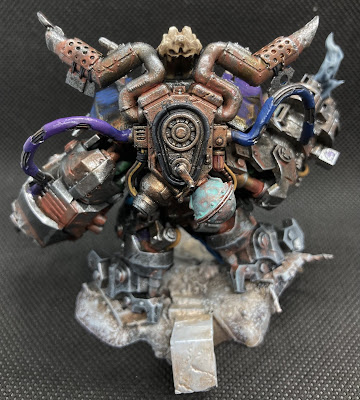 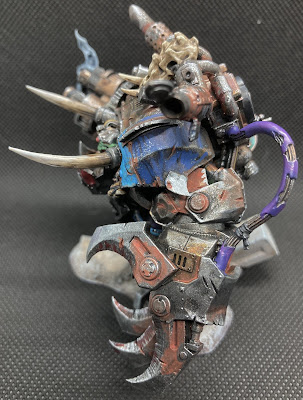 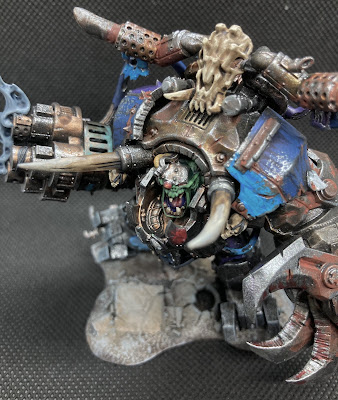 I'm really happy with how this model came out, all the rust and chipping just looks right to me, he looks 'blue' but not super Deathskull, the face stands out appropriately without being too bright (a personal pet hate of mine - when the Warboss has lighter skin than the boyz due to more highlight layers.) Just absolutely nails what I like my orks to look like. I have to admit when he was voted model of the year I was a bit skeptical, but having got my hands on it, Ghaz is a fabulous model and I think I want one myself! 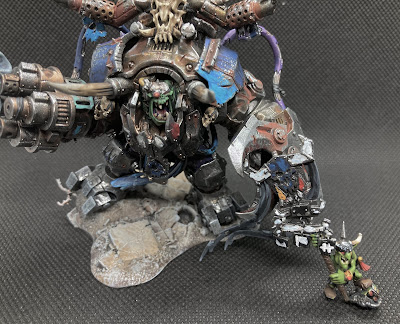 Look how chonk he is compared to his lucky grot Makari! 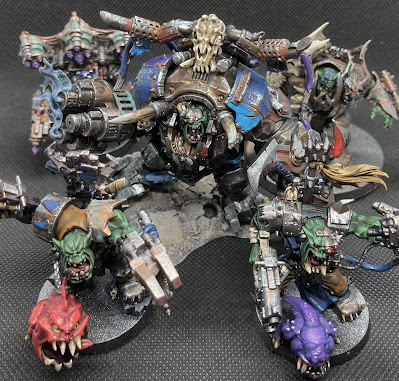 And here he is leading his 'council' of Deathskull bosses! No question of who's da biggest!
Anyway, hope you enjoyed this little Orky project. I know the client is happy with them, so that's the main thing, but it's also good to paint some proppa minis again! Also, this might not be the end of the Ork blog content...
Stay safe! 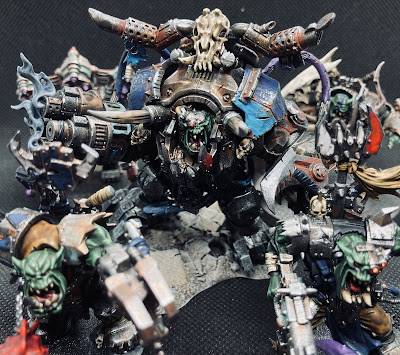