Hello!
In the last post I showed my new Death Guard, and since then I've painted a few more... 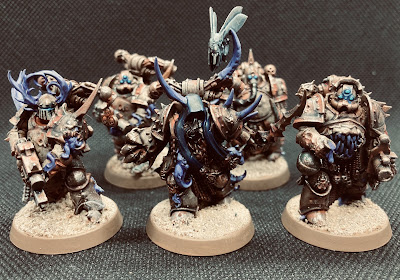 There will be more pictures a little down the line in their 'completed' blog post, but for now I thought I'd list how I did their scheme, in case anyone wants to copy, or, more likely, I forget. 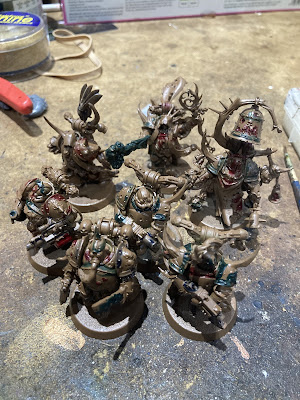 The first step is to, after building the minis, undercoat them all light brown. I used army painter's leather brown spray. I then added some extra splashes of colour with contrast paints - this isn't going to be very visible on the finished model so it's entirely optional. 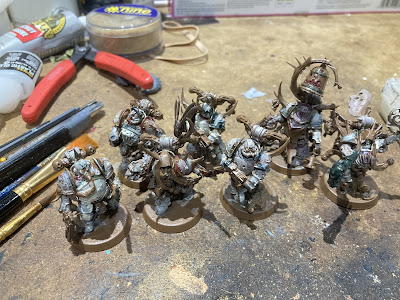 Next step is to slap some bone or off-white (I used Vallejo game colour Bonewhite) onto the ceramite armour plates. I tried to avoid the trim where possible, but not particularly hard. Coverage isn't super important here, this was kind of a heavy drybrush with some 'blobs'. 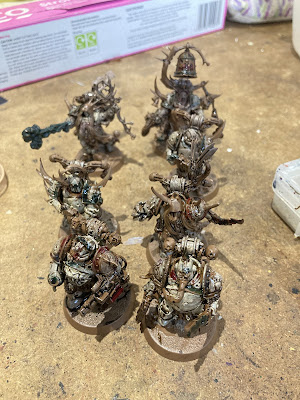 Next is the Agrax Earthshade drowning. Other muddy brown washes are available. This brings the model together a bit and covers for the messiness of the previous stage. 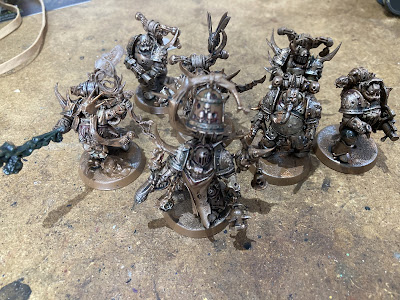 And now, time for the secret weapon - the sponge! I sponged on some brass, then gun metal, focusing on the trim and weapons, but letting the sponge hit raised areas on the armour as well for chipped and damaged areas. The sponge is super fun, but I'm still learning the skills for applying it 'properly', so these models that are almost entirely covered in damaged armour are perfect practice! 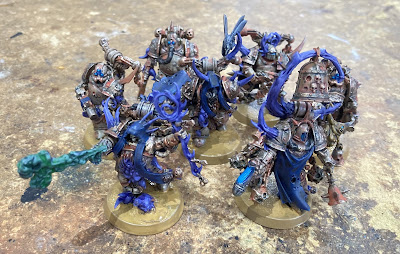 Next is rust - I use the forgeworld weathering powder, but pretty much any rust powder or orange paint will probably do the trick. It's heavily watered down and added to the exposed metal areas, going into the gaps and painted on a bit in streaks from bullet holes etc.
With the main colours now done, time for details and stuff. Most of this was painted dark blue or purple them either worked up with mixed in bone, or covered in contrast paints. Some other details were added in as well, including the ice blue on eye lenses and plasma coils (which then got a blue wash). The bases were then painted in a light earth colour (game colour Earth in this case) and then covered in sand, which was eventually drybrushed white after some extra PVA to keep it firm. 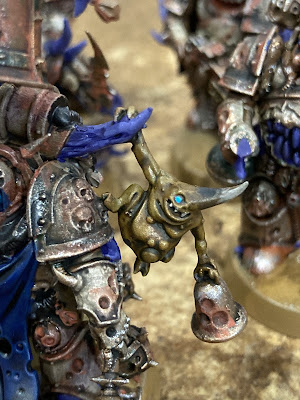 And that's pretty much it. It's a fairly easy, very messy scheme, but I'm happy with it. Hopefully you all like it as well, and you'll be seeing more of them a little further down the line. Stay safe out there, don't hug any nurglings!
Posted by Redtoof at 11:23