Hello!
Second game for my Death Guard; after taking on the Astra Militarum, the corpse god sent in the Astartes! Once again taking place at Grim Dice, this time my opponent was Ed with a custom chapter of Imperial Fist successors. We played at 1000 points, using the Crossfire mission from the main rule book. 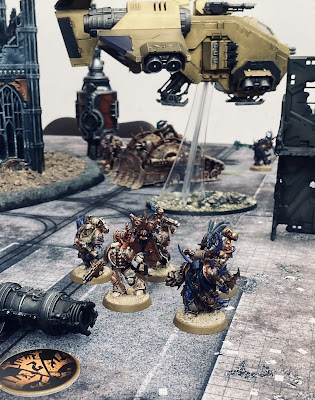 I was running exactly the same list as in the last game (Mortarion's Anvil Battalion). For my secondaries I took Spread the Sickness, Assassinate and Engage on All Fronts. 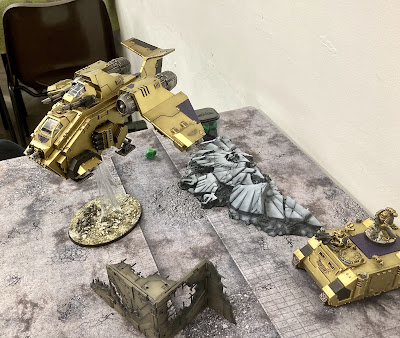 Ed was running a high risk/reward list that he said would either smash or be smashed. Imperial Fist successors Patrol with Bolter Fusillades and Master Artisans. His secondaries were Assassinate, Abhor the Witch (no one likes my Plaguecaster!) and Linebreaker, which along with his list signalled his intent pretty well! I think the Chaplain also had a warlord trait but I'm not sure which. 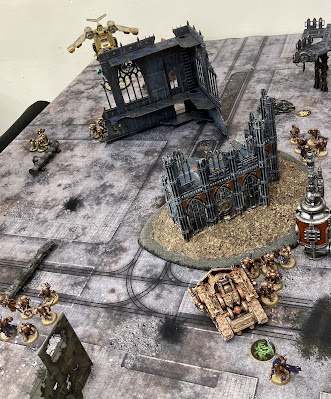 We set up partially behind ruins, with some units ready to run onto flank objectives. My Terminators and Lord were in the teleportatium, while Ed's Terminators and characters were in the Storm Raven. I got first turn again.
I spread out my units towards objectives, claiming one and not quite reaching another. The back squad failed to Spread the Sickness. I reasoned it would be unlikely for me to take out the flyer in one go on turn one, so I aimed the Crawler at the Rhino. The new model gods has apparently been appeased in the last game, because it hit with both Entropy cannons, plus the Mortar with Disgusting Force, and removed the tank in one round of shooting. A good showing I thought, ready for it to get nuked by the Stormraven... 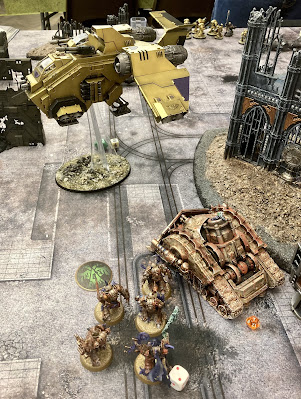 Well, that movement was expected, but the shooting, not so much! All the firepower poured into the PBC, but thanks to some miserable damage rolls it hung on with seven (the blessed number!) wounds remaining! A very fortunate turn of events for me. 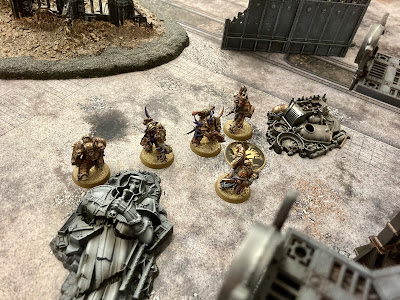 On turn two I spread out further, claiming 15 Primary points and setting up for plenty of Engage points as well. Spreading the Sickness once again failed. 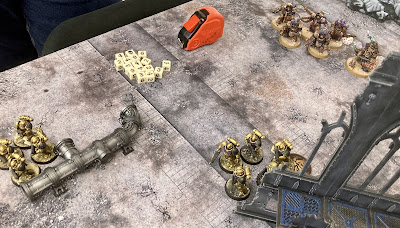 I also dropped my reserves in behind the Imperial lines, where the Stormraven had taken off from. The Blightords and their boss saw a nice juicy soft target, presumably learning their lesson after butting heads with a giant tank in the last encounter! 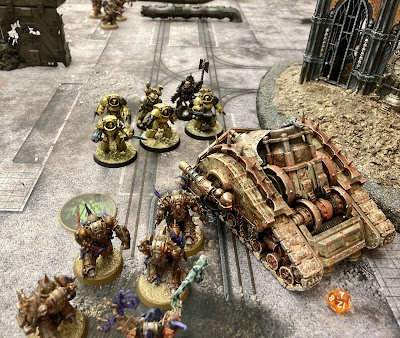 With another supreme effort in the shooting phase (assisted by some mortal wound output from the Plaguecaster), the Plagueburst Crawler blasted the Stormraven out of the sky! This did leave an angry squad of Terminators in my lines, but it was a huge asset out of the game for Ed.
Elsewhere the Lord of Contagion made it in against the Intercessors camping on the back objective, reducing them to two models, one of which fled before him! They still held that objective though. 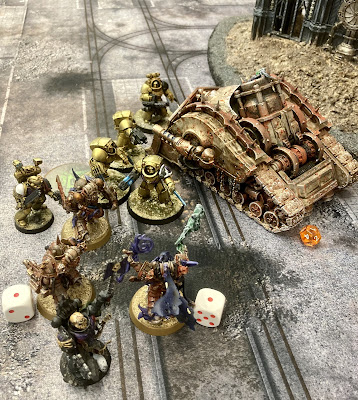 Ed's turn two and some token shooting killed a few Plague Marines, before the charge happened. Terminators buffed up by a shouty Chaplain took the PBC down to a single wound with chainfists, but the Chaplain failed to kill the Plaguecaster and the Apothecary survived a power fist to the face from the remaining marines. Once again the Death Guard proved very hard to wipe out.
Without the Stormraven or Rhino, the Imperial Marines were very limited in their mobility, enabling me to rack up more Primary points. In my turn three the Blightlords finished the Tactical squad with shooting, then secured the back objective with their Lord finishing off the last Intercessor. My Plaguecaster was finally brought down, but the Apothecary bought it, and when the Terminators finished off the crawler, it had a Putrid Detonation, mortal wounds killing the Chaplain as well! An excellent game for the big rusty tank! 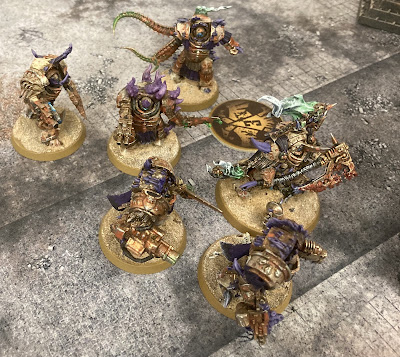 Sadly for Ed, this left him with just his Terminators on my objective, while I controlled all the other three. His hammer had not struck as hard as he wanted, breaking on the (Mortarion's) anvil of the Death Guard. With that he conceeded. We both agreed his initial assessment was correct - it was either going to go really well (if the Stormraven crippled the Crawler and then didn't get shot down, it could have cause all kinds of problems for me) or really badly. That said I was pleased with how much list was working so far. Death Guard are great at hanging on to objectives, and can be quite killy when they want to be.
I think at 1000 points this feels like a fairly balanced list, while so far I've faced quite lopsided ones with a lot of points invested in one basket, which is a bigger risk in 9th edition than it has been in the past. It also helped me, but not my opponents, that the secondary objectives aren't very well balanced for this size of game, putting much more emphasis on the Primary scoring. Perhaps the newer GT 2021 pack secondaries will help, but I think in future I'd avoid playing matched play Incursion missions from the rulebook.
In the end then, it was a fun game, and a convincing win for the Death Guard. Hope you enjoyed reading, and stay safe out there.
Posted by Redtoof at 10:38