Hello!
Way back in August last year, I played Sharpy with my Orks against Daemons. Well, best part of a year later and we've played another game! This time the Orks faced off against the Aeldari in a 2000 point Open War game... 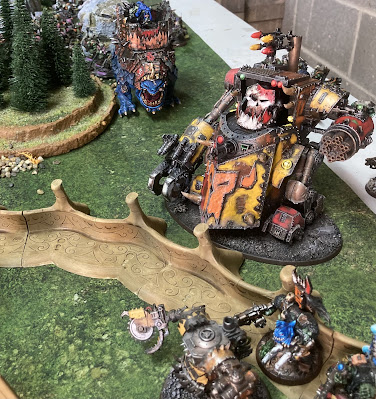 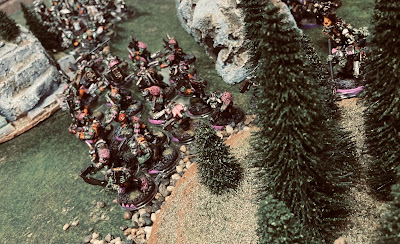 I took a Snakebite Battalion, splurging 5 CP for various upgrades and kustom jobs. A bit of a stompy theme, and the first battle for Nipper Jr the Squiggoth. 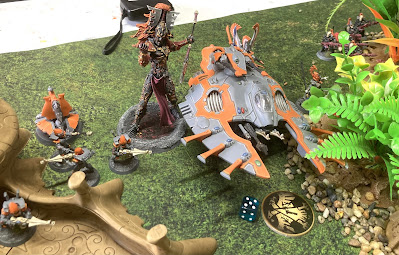 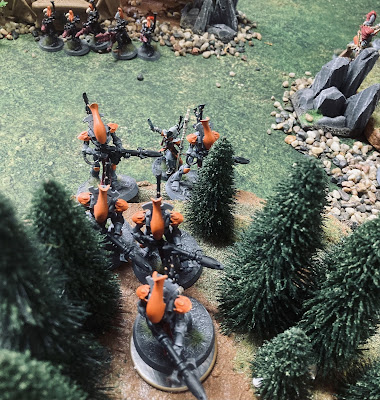 Sharpy took his custom Craftworld Karantyr, using traits for a 6+ invulnerable save and the ability to reroll a hit and wound roll for each unit in a phase. He had a Battalion and a Vanguard detachment, taking a classic mix of aspect warriors. I don't remember all the upgrades, but it was something like this: 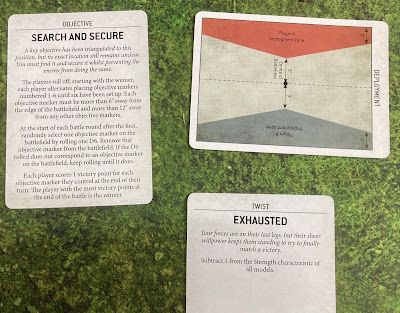 We used the Open War cards to determine our mission, giving us Search and Secure (six objectives to score at the end of your turn, that are one by one removed from the table) on an arrow head long board edge deployment and with out units being exhausted, so everyone had one less strength! 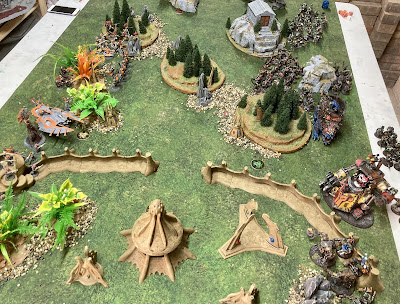 Deployment! The tricksy Eldar kept plenty of their units in reserve, Warp Spiders, Swooping Hawks, Scorpions all off the board and the Fire Dragons using the Webway. I put everything on, though the Tankbustas were riding on the back of Nipper Jr and the Meganobz were hitching a ride in the Gorkanaut. With objectives spread through the battlefield we both deployed to cover much of the board, though I did favour my left flank with most of the characters running up behind the Killa Kans and Gorkanaut. We rolled, and the Aeldari got the first turn. 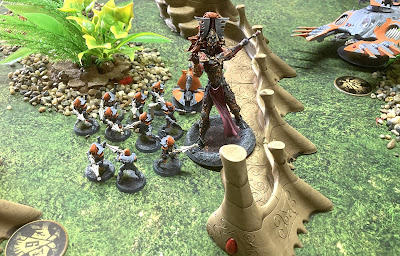 Eldar turn one was fairly uneventful in terms of damage, with the KFF keeping the Gorkanaut safe from bright lances and the Dark Reapers only leaving a small dent in the Squiggoth's armour. However pushing the Guardians and Avatar out on the left flank and the Wraithguard up centrally gave Sharpy four of the six objectives, and a strong start to the scoring. 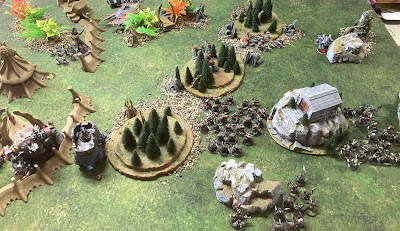 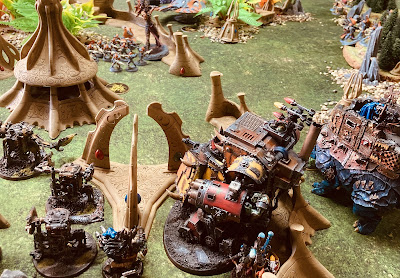 My turn one saw most of the Orks push forward. We held a pair of objectives near our deployment, but also went hunting the one on the central hill, guarded by Wraith constructs. 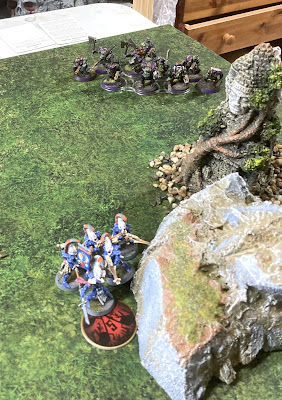 In the psychic phase I made a cheeky play for one of the Eldar backfield objectives, casting Da Jump on the small mob of boyz behind the Dire Avengers. Sadly they failed the charge, oh well, it was nice knowing you. 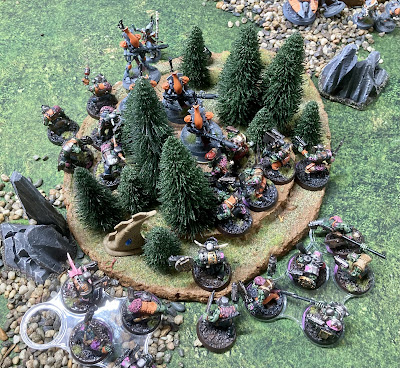 Elsewhere shooting from the Gorkanaut pulped some Guardians with the Slug Gubbin and the Tankbustas reduced the Wave Serpent significantly. The pink boyz in the middle made their charge on the Wraithguard. Being Exhausted, they failed to do any significant damage, but being objective secured they claimed the centre, giving me three points to start. 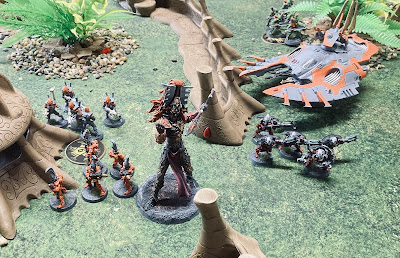 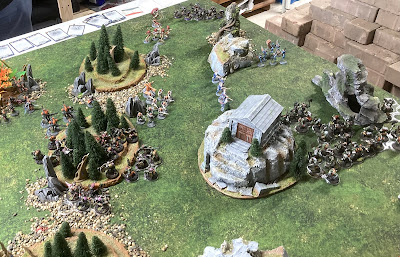 Turn two, the objective under the Dire Avengers on the right flank disappeared.
Aeldari turn two, and the reserves arrived. Warp Spiders and Fire Dragons supporting the Avatar on the left flank, Scorpions dropping onto a rear objective, and Hawks joining the Dire Avengers on the right. The Wraithguard fell out of combat to light up the Boyz mob, while Jain Zar and her Banshees moved to intercept the sneaky purple Boyz.
The Psychic phase was a bust, with the Farseer dealing one wound from the first stage of Executioner, which was saved on a 6 by the Snakebite trait, and the Spiritseer suffering Perils for 3 wounds. Shooting was more effective, putting some significant damage on the Gorkanaut from the Fire Dragons and Wave Serpent, and a lot of firepower going into the Boyz on the hill. Disappointingly for the Aeldari, they were forced to fire the Dark Reapers into the Boyz to finish them off, rather than targeting the Squiggoth. 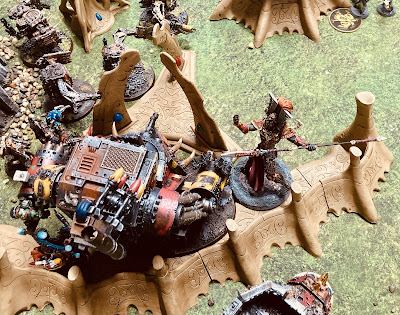 Then the Avatar charged into the damaged Gorkanaut, stabbing with his flaming spear right into the smoking monster's engine... 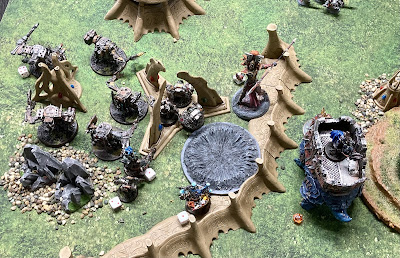 KABOOM! A huge explosion in my lines, reducing the Warboss to a single wound and nearly killing the Nob and Big Mek (only their Snakebite trait saving them). Ouch!
Over on the right flank Jain Zar killed a bunch of orks, though they interrupted to kill off her Banshee retinue. Controlling the centre and two left flank objectives, the Eldar picked up another 3 points. 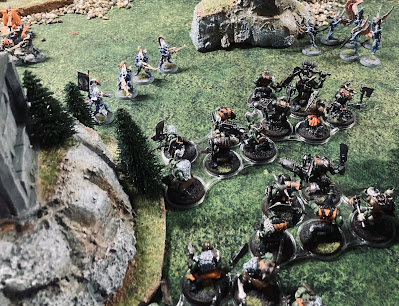 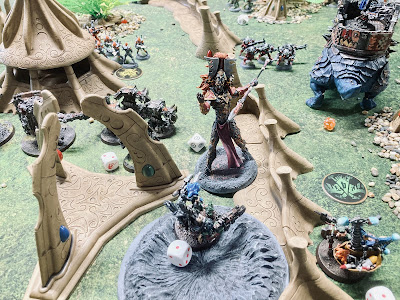 They may have been exhausted and had taken a battering from the Aeldari shooting, but the Orks were still up for a big scrap! Units on both flanks moved up to engage, temporarily abandoning any thoughts on the centre objective. The Weirdboy used Da Jump on himself to pop over to the right flank objective and behind a big rock, then casting Warpath on the remaining big mob of Boyz, lining up to punch some elves.
Shooting put some hurt on the Avatar, reducing him to 3 wounds for the Warboss, before the Tankbustas finished off the Wave Serpent. Then the fighting! 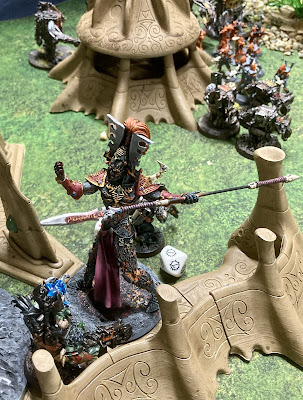 The epic duel! The Warboss had to fight first here, but only managed to get one wound through the invulnerable save of the Avatar, of which one damage was resisted. When it struck back though, somehow it also failed to wound, leaving both characters alive on a single wound!
Elsewhere Jain Zar finished off the sneaky boyz, while the Meganobz cleared some Guardians off an objective (at the cost of three CP to fight twice!) Killa Kans were ineffective against the Dragons, while the Squiggoth got some bonus movement with a big charge, but left one of the Warp Spiders alive. The big mob of Boyz killed of the Dire Avengers and the Swooping Hawks between their pistols, choppas and morale. I picked up three points for objectives, leaving the score 7-6 to the Eldar. 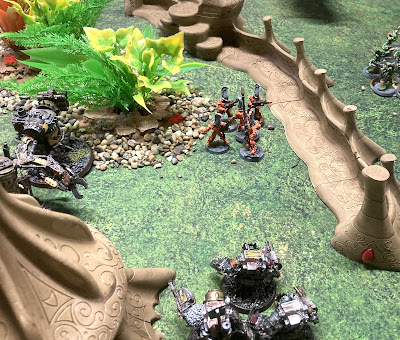 Into turn three, and the objective under the Meganobz vanished, making me feel a bit better about spending so many CP to claim it while I had the chance. The Eldar had taken a battering, but they weren't giving up. Fire Dragon fell back, using CP to be able to shoot as well, melting the Meganobz. Wraithguard and Dire Avengers looked at the now Doomed Squiggoth, while the Farseer and remaining Guardians held the centre hill, and Jain Zar hung out near the Boyz as some tempting bait. Nipper Jr took a whole lot of firepower but hung on with a few wounds left, then survived the charge from the constructs and the Autarch, thanks to everything needing 6s to wound.
The Avatar and the lone Warp Spider attempted to steal an objective from my Warboss/Big Mek (who survived some shooting, having been left behind by the other Ork units), but heroic intervention finally saw Redtoof taking down the Avatar of Khaine. The Eldar, being mostly pushed to the centre, managed 2 points this turn. 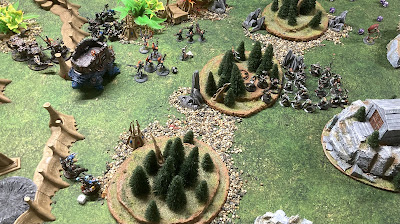 Ork turn three, and we tightened the noose, sensing a chance to level the score. The Boyz ignored the Phoenix Lord, choosing to deal with the Guardians on the central objective, wiping them out and claiming it. The Weirdboy hung back behind his rock to keep the backfield right one, while the Warboss bonked the last Warp Spider to hold the left flank. Killa Kans continued to harass the Fire Dragons, finally killing some and leaving the Exarch. The big move of the turn was the Tankbustas jumping off Nipper Jr's back to shoot and punch the Scorpions and claim a forth objective! Four points, putting me into the lead 10-9. 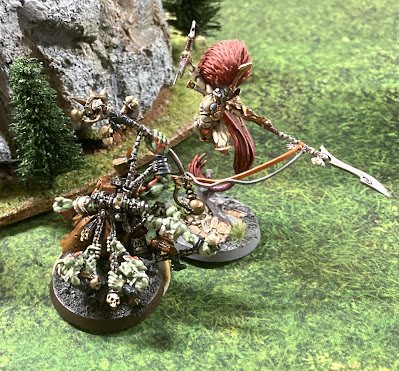 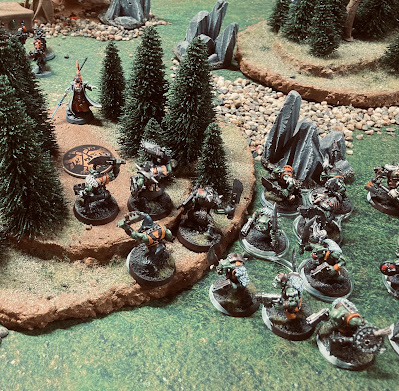 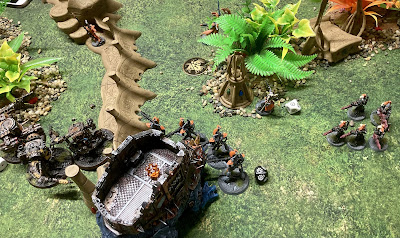 Going into turn four, the Big Mek looted the left flank objective, and the Aeldari went searching for some points. They found one easy one, as Jain Zar danced across the board to beat up the lone Weirdboy. Shooting and combat cleared the Tankbustas off the Eldar home objective once more, claiming it with the Autarch, while the Farseer tried to hold the pass against the Boyz. Once again, Wraithguard punching was unable to finish off the Squiggoth. Another two points for the Craftworlders, putting them back into the lead. 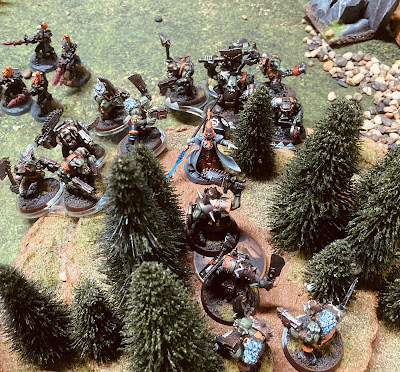 Orks turn four, and the Boyz once again swarmed over the central hill. We also had the Killa Kans charge into the Warlord to claim the objective he was standing on (though no real chance of killing him) and the Warboss running in to punch out the Wraithguard. Another two points to da boyz, seesawing me back into the lead 12-11.
Into turn five, and we lost the objective under the Kans/Autarch. This meant we only had the central hill and the one that Jain Zar was now happily meditating on, far away from any living greenskins. With a guaranteed point for the Eldar to level things up, it all came down to if  they could clear the Boyz off the centre. 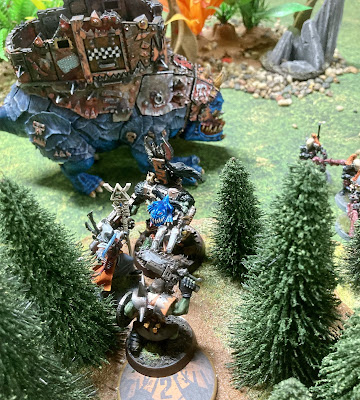 Some heroics from the two Psykers and even a charge from the Dark Reapers wasn't quite enough to take the point, as I had saved two CP to automatically pass the morale on the remaining Boyz. Redtoof himself then came barrelling in on my turn to clean up the remaining seer, ensuring the hill remained green. The final score was 13-12 to the Orks. WAAAGH!!!
What a game! Close to the end, and an absolute bloodbath for both sides. It was great fun to play a 'big' game of 40k again, with 2000 points a side and almost all of that having a part to play in the eventual outcome. I enjoyed the simplicity of the Open War deck, and like the previous version it seems to produce nice close games. This match had a bit of an 8th edition feel to it actually, with limited obscuring terrain, two 8th codices and scoring objectives at the end of our turns. Though I am looking forward to playing some Crusade or 'full sized' matched play games, it was a welcome change and a great way to get back into the feel of things. I definitely recommend giving the Open War cards a go as an alternative to the other, admin heavy versions of the game. And aside, Nipper Jr did pretty good on his first game, surviving to the end (it took his dad about 15 years to manage that!)
Anyway, thanks for clicking, hope you enjoyed reading, and stay safe.
Posted by Redtoof at 18:20