Hello!
Continuing on from the purple and green 'sponge' Tyranid project, last time I painted a big wave of 'gants, 'gaunts and 'stealers - this time it's Warriors and and other assorted 'medium' things. Though I will be stretching the definition of 'medium' to it's limits!
First up, the aforementioned Tyranid Warriors: 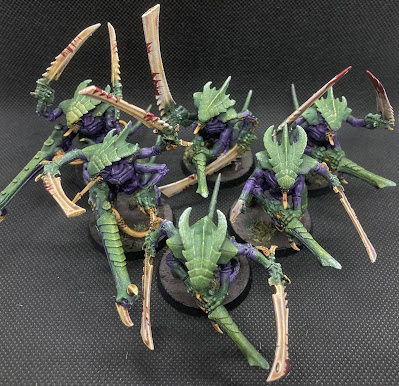 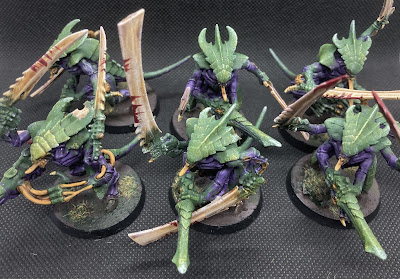 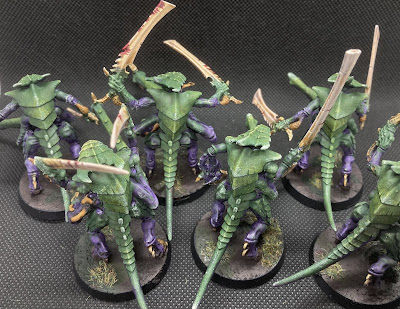 We've got  mix of the newer kit and the older 3rd edition one with converted boneswords here. The boneswords got painted bone, as you might imagine, with a bit of blood splatter to add some extra colour. You might notice there's a little bit of extra depth to the green on these Nids - I used Plaguebearer contrast to cover some of the larger areas (leaving the most exposed bone sponged areas alone) to make them pop just a little bit more. I think this is most noticable on the Warrior's backs and on the head carapace of our next brood... 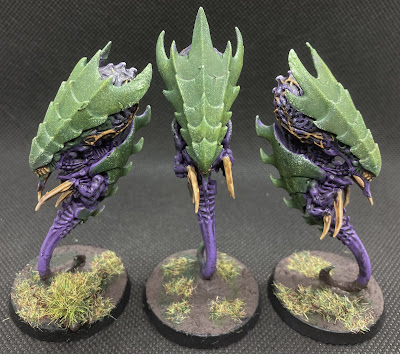 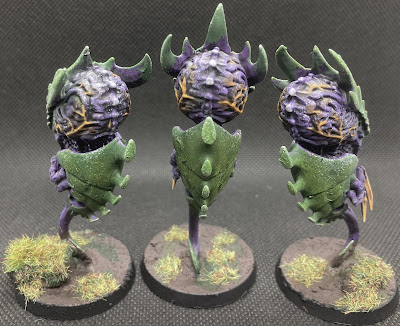 Zoanthropes, big old floaty alien brains. I gave them some yellow veins on their brains to make them a bit more colourful, but otherwise they are pretty much just a normal Nid scheme with the green areas almost all being the carapace. They were supplied to me without the rows of side chimney bits on the back carapace, so I used some green stuff to smooth out the gaps a bit - I think it's done the trick. 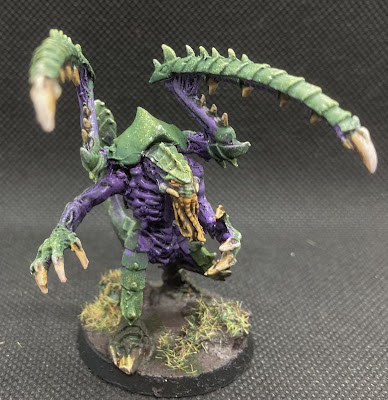 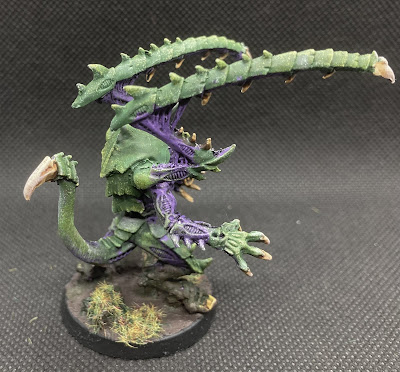 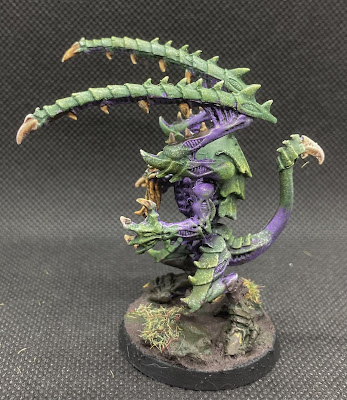 Next, the Lictor. Though they have been seeing use competitively as secondary spammers recently in 40k they have a sad history of being pretty rubbish at their actual job of assassination and disruption (though I've heard horror stories of their antics in second edition!) That said, they are exceptionally cool models, so I was glad to get to paint one. This one got a bit of a textured effect for his tendrils and some mud and swampy paint coming up his legs to represent his chameleonic scales. 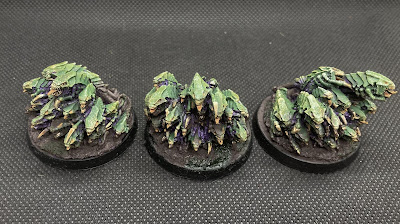 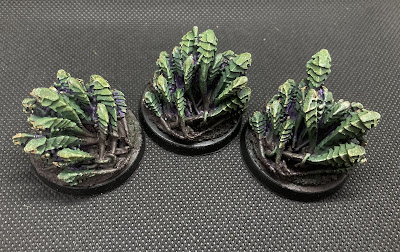 So I guess these are technically medium sized models, but they are really tiny bugs! The Forge World Ripper Swarm bases look fantastic, and they took to the sponge well - but it is a pain to pick out all those claws, teeth, tongues and eyes! 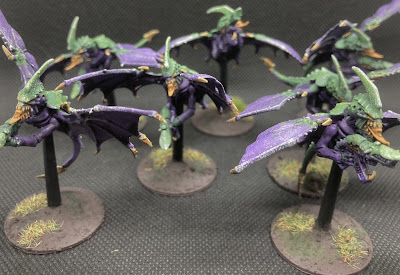 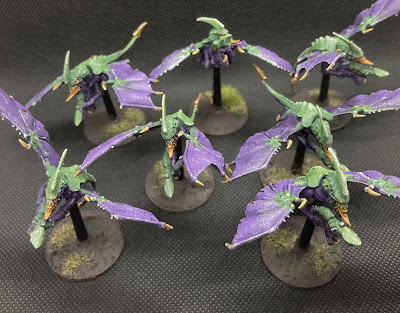 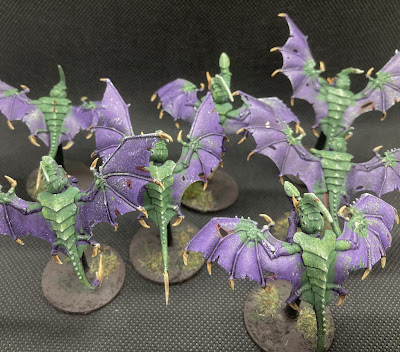 Again, not really medium bugs, though Gargoyles do take up a lot of space wherever you put them. They came to me with the flight stands glued on, so they got painted, and after the fact I think I prefer that look to my clear ones. Perhaps one day I might go and apply some texture paint and grass to mine! I also have to admit they are a lot less annoying to move about when their flight stands don't fall off every time you pick them up! 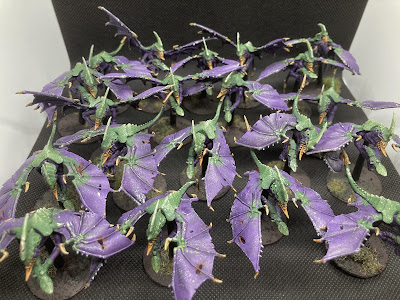 Oh yes, also there are twenty of them! 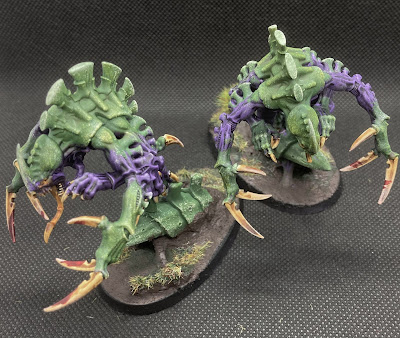 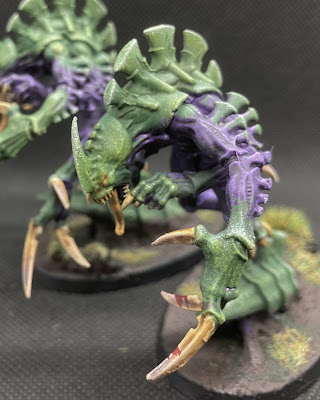 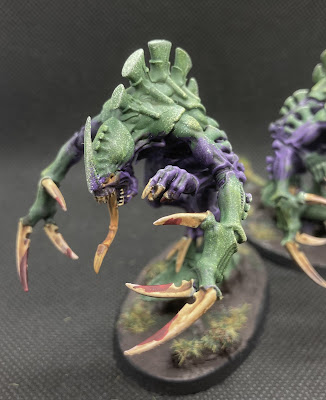 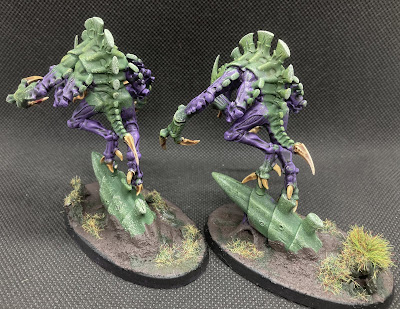 Lastly (for this update), the Broodlord brothers! This pair ended up looking pretty cool I think, a nice mix of the purple and green and a bit of an excuse to build up some more mud and swampy stuff around the protruding Nid bits on their bases. I gave them slightly different markings as well to tell them apart a bit better, most notably one has purple secondary claw hands and around his teeth, while the other has green hands and face.
Next time we'll be looking at some bigger bugs! There might be a step by step guide as well. Hope you like them, and enjoyed reading. Stay safe!
Posted by Redtoof at 16:54