Hello!
Back with another Death Guard game, this time as part of my warband's Crusade! The Desiccated, led by Lord of Virulence Najax the Generous have made planetfall on the embattled world of Silex, at the Cathedral-City of Eramis. They have been busily setting up a shrine to Nurgle, hidden from Imperial forces by warp-tech obscuration engines, when who should show up, but those Deathskulls they defeated on the volcanic world. Time for the Death Guard to defend their shrine and the generators!
So as with the first game of the campaign, the Orks were piloted by Tony from the Narrative Wargamer Podcast (and he also took a good chunk of the pics I'm using here) - looking for revenge! We decided to play using the War-Torn Shrine World Theatre of War from Psychic Awakening: Pariah, and played the Weaken the Defences mission from one of the Crusade mission packs - Amidst the Ashes? Essentially points = to power level killed, plus the defender gets to go first and has light cover on their entire deployment zone - so long as the attacker doesn't turn off any of the generators at the three central objectives. The attacker also gets points as the game goes on for each generator that remains switched off. We were playing at 75 power level - or about 1500 points. 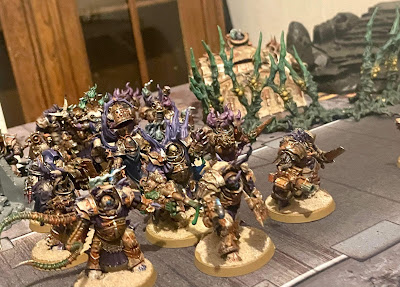 Najax the Generous lead a mixed force of Death Guard from the Mortarion's Anvil Plague Company. Two Blightlord Terminator squads and two units of Plague Marines made up the bulk of the infantry, with a unit each of Cultists and Poxwalkers to support. A host of characters were assisting; a Malignant Plaguecaster, Noxious Blightbringer, Plague Surgeon and Foul Blightspawn. Vehicle support came from a couple of daemon engines; a Foetid Bloat-Drone and a Plague Burst Crawler. Only Najax had so far been upgraded, with a warlord trait and relic (Arch-Contaminator and Fulgaris' Helm) and as a blessing from Nurgle, Clawed Feet for extra movement.
My agendas were Honour the Patron (every unit that kills 7+ models gets xp), Cull the Hordes (xp for killing 6+ models in a single phase) and Machine Vendetta (xp for vehicle kills by a vehicle, the amount rewarded depending on the wounds of the target). So pretty much just kill stuff, since that was what I was going to be doing anyway. 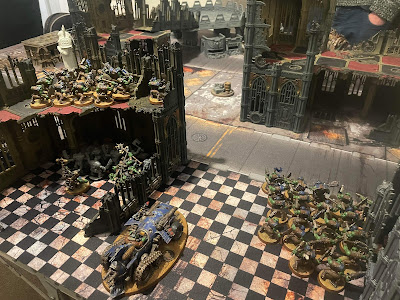 The Deathskulls were led by Warboss Zaggdreg Ironhide in his newly painted Mega Armour. He brought along a Weirdboy and a Big Mek, and three mobs of 20 Boyz, all of which were veterans of previous battles. They were supported by Meganobz in a Gunwagon armed with Da Boomer, a Wazbom Blastajet and the Megatrakk Scrapjet that was still showing the scars from when it got blasted to bits by my AdMech.
Their agendas were Machine Vendetta, Master of the Warp (xp to a psyker for doing psychic powers) and Krumpin Spree (xp for the Warboss killing characters and big stuff). 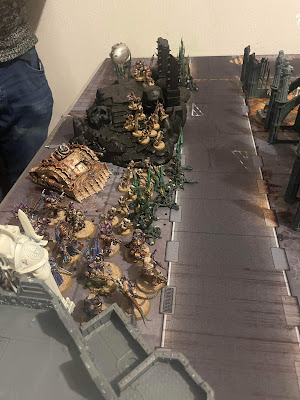 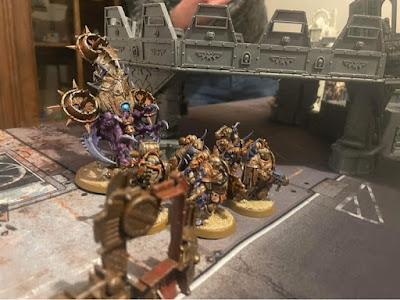 Deployment: Pretty simple stuff for me, a big blob of Terminators and characters in the middle, packed up by the Plague Burst Crawler, with Plague Marines on the flanks to contest objectives. The Orks hid most of their units behind buildings but had some Boyz ready to run up the centre. Aside from the Meganobz and Warboss in the Gunwagon, everything was on the board. As per the scenario rules, I went first. 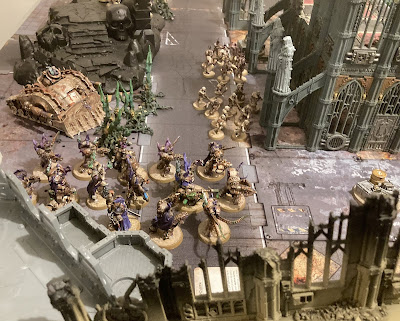 A very Death Guard slow progression up the board. Nothing was in range to charge and I didn't have many things that could shoot - the PBC fired at the Gunwagon for minimal damage and the front unit of Terminators killed a few Boyz. 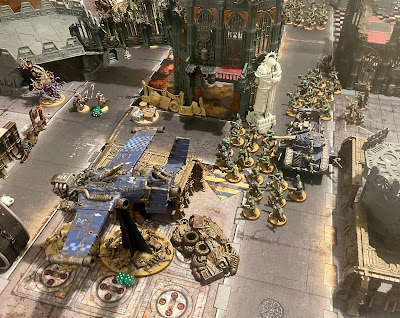 Orks turn one, and a bit of cagey movement from the Boyz, getting into positions for a turn two charge while being far enough away to make any of my charges difficult. The vehicles all lined up some shots though - the Bloat-drone took a chunk of damage but the Blightlords absorbed a load of punishment for no effect. 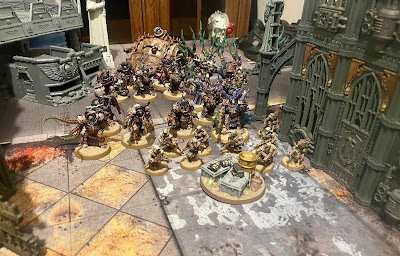 In turn two, the Terminators moved up once again, with Cultists advancing onto the central objective to try and be a bit of a screen. I also launched a Blight Bombardment into the Ork lines to at least get them to think about their movement. Shooting from all the bolters and the stratagem-extended range of Najax' Plague Spewers cut down a bunch of the Orks opposite them, with morale doing the rest of the work to reduce the unit down to four models. The Plagueburst Crawler had an excellent turn, blasting wounds off the plane with the Entropy Cannons and destroying the rickety old Scrapjet with it's Mortar - due to it's battlescar it takes mortal wounds every time it's hit by a high strength weapon, and the mortar hit four times. The heavily damaged Drone decided it was hungry, and plowed into some Boyz using the Daemonic Gluttony stratagem to regain three wounds after killing eight of them! They then responded with a Tankbusta Bomb and a load of choppas to reduce it right back down to one wound! 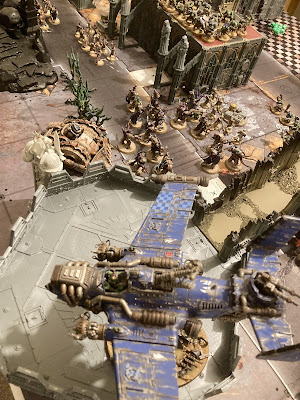 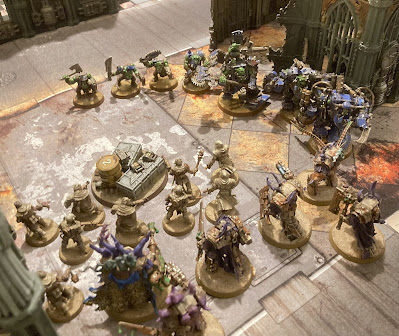 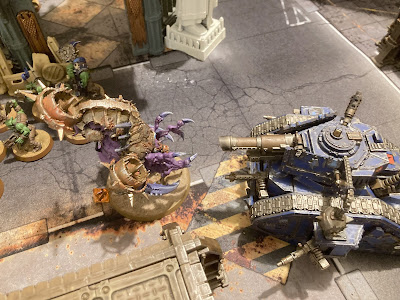 The Ork forces lines up for a potential killing blow, while largely avoiding the blast from the incoming bombardment. Zaggdreg called a WAAAGH!!! and led his Meganobz out of their wagon into the Death Guard lines, while the remaining full strength Boyz squad pincered around to try and engage a bunch of my characters. The plane and the wagon moved to get more shots, which unsurprisingly blasted my Bloat-drone back to the warp (though not before it exploded) and once again bounced off the Blightlords - they were in an obstinate mood apparently. Elsewhere a remnant Boyz unit did turn off one of the generators.
Then the Meganobz, Warboss and Boyz charged in. Zaggdreg swung in, powered up with the Fists of Gork, and managed to do... two wounds to a Blightlord. They promptly interrupted, powered up with stratagems, and battered the Meganobz! 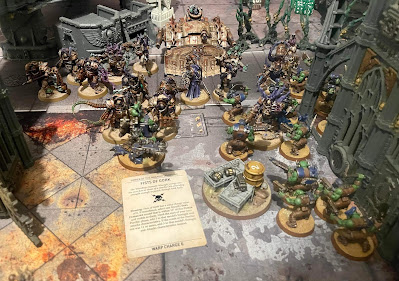 When the dust settled, the Meganobz were dead, the Termiantors were still alive, but the Boyz had killed the cultists and gummed up all my characters. It was though not at all the desired result for the Orks. 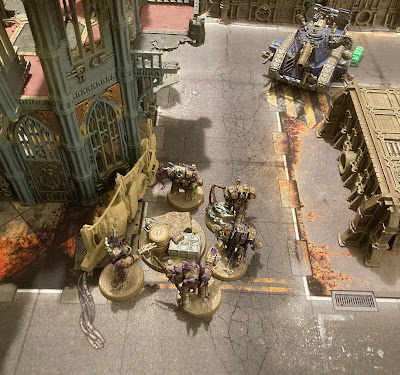 In my turn three it was mostly a case of reclaiming my lines. One squad of Blightlords charged out to go switch a generator back on, destroying the Boyz guarding it in the process. In the middle there wasn't much movement, but the Foul Blightspawn dropped his death's head grenade at his feet to kill four boyz. The PBC continued with it's good work, blasting the Blastajet out of the sky. Then in melee the combination of my characters killed off pretty much all the boyz remaining. With that the Orks were blunted and it was just a case of scrapping out for a bit of glory. 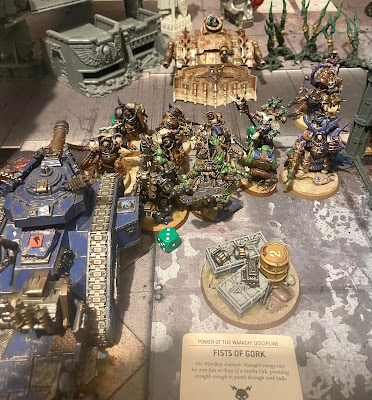 Zaggdreg consistently failed to cut through the Terminators over the last couple of turns, eventually falling himself to shooting, along with his surviving characters. In the last turn the PBC killed the Gunwagon (which had rammed into the Blightlords, doing more damage than the Warboss), which then exploded to finally take out the last of the Terminator squad and salvage a bit of pride for the Deathskulls.
With the Orks vanquished, it was another victory for The Desiccated!
Fun game, if a little one sided - it seems our Death Guard vs Orks games go that way, two convincing Crusade victories to me, but a pretty strong showing for the Orks last time we played in a matched play game. We think it's probably down to the amount of damage the Orks can put out - in the Crusade list it's a lot of two damage stuff for the most part, which is not ideal for the DG.
In any case, I came away with a whole load of XP across the board, both Terminator units went up a level and gained a shooting related buff (one of them is getting +1 to hit and the other ignores cover at half range) but the star of the show was the Plagueburst Crawler 'The Oasis of Filth' - it's now got 6 unit kills over two games and shot up almost to the second rank! As a reward I rolled on the Death Guard Daemon Engine table and it has now sprouted Spider Limbs, allowing it to move through terrain and models, which is hilarious. I also spent my Virulence Point from the last game to reroll part of my personal plague - I now have Haemorrhaging, Pox-ridden Sores. This means if the warlord gets close enough he can infect enemy units to make them half their advance and charge rolls.
Hopefully you all enjoyed this write up - I know it's not everyone's cup of tea but I'm really enjoying Crusade at the moment, so hopefully I can play a bit more soon! Thanks for reading, and stay safe out there!
Posted by Redtoof at 20:23