Hello!
I'm taking part in a Crusade League/Campaign thing at Grim Dice, using my Ryza Adeptus Mechanicus force aka the Helios Explorator Fleet. They were last seen on Crusade before the 'new' AdMech book, and I've been looking forward to having a go at grabbing some Archeotech items, so it seemed like a good excuse to give them another go.
In this campaign everyone starts on 25 power level, increasing by 25 each month with two games at each level, until we reach 100 - 8 games total I think! It had to be a new Crusade so I would be running the Helios Explorator Fleet Second Cohort. We were also using the Plague Purge mission pack, so it'd all be new as far as I was concerned.
Let by Eldane Katronosa, Tech-Priest Manipulus, the initial force consisted of Kataphron Destroyers, ten Skitarii Vanguard, Sicarian Ruststalkers and Pteraxii Sterylizors. Katronosa is kitted out with a Magnarail Lance, Masterwork Bionics and Anzion's Pseudogenetor. I thought it was a nice mix of units with enough melee stuff to take advantage of our 'not Blood Angels' trait. 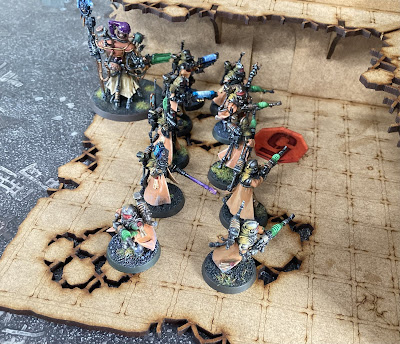 My first game was against CJ and his Salamanders, playing the scenario Tech-Relic. I can only assume the Salamanders were securing the area from other, non-Imperial forces when the AdMech deployed to claim the spoils. Gib tech! This is a 'search the objectives to find the real one, then carry it around with you' mission - kind of like the old Relic mission from 8th edition but with the relic randomised between four possible objectives.
The Salamanders force consisted of a Captain, some Infiltrators, Bladeguard and Eradicators. Pretty elite and being salamanders they were ignoring the -1 AP the Manipulus would be giving out to the Vanguard. I took the agenda to dig up an objective to grab a tech part, while the Salamanders were looking to wipe my lot off the map.

I got turn one, Pteraxii in the sky and servitors hiding behind a ruin, the Vanguard and Ruststalkers moved up on the flanks. As luck would have it, the Vanguard found the Tech Relic straight away! Bingo! 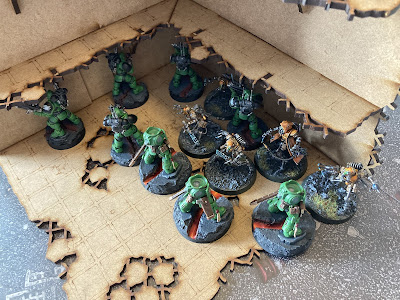 I was also able to make a first turn charge with the Ruststalkers into the Infiltrators in the opposite ruin, since they were forward deployed. This means the Bladeguard were able to use a stratagem to heroically intervene 2d6 inches and pile into me. I spent a bunch of CP to buff the 'stalkers, split attacks, and butchered the Bladeguard with some good mortal wound output - as seen here all of their heads and arms were chopped off! The Infiltrators did survive though and hit back hard to remove a couple of the Sicarians. 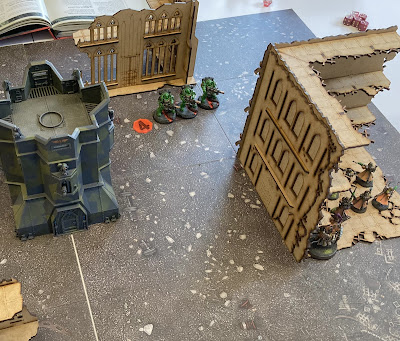 The Eradicators popped out of cover the get an angle into my Kataphrons - without much trouble the Servitors were removed before they could fire. We left objective 4 in play temporarily since it was the one my Tech-Priest wanted to examine. 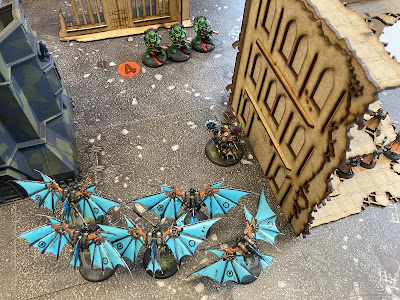 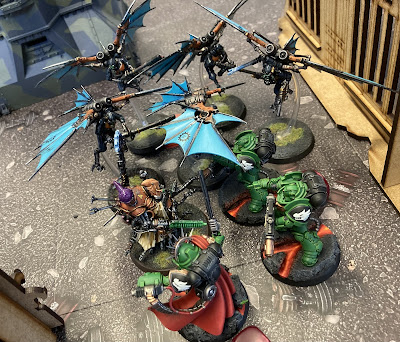 The Sterylizors dropped in turn two to deal with the Eradicators, supported by the warlord Katronosa. However ignoring their -1 AP and being Gravis armoured meant the flamers were ineffective. The charge did go off though, and the Captain intervened. Katronosa struck at their opposite number, and with some very poor armour saves, reduced him to a single wound, only to get struck down in return. 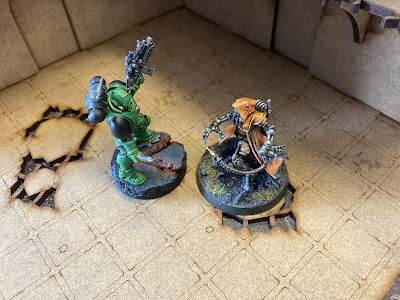 Elsewhere the Infiltrators and Ruststalkers were reduced to just their squad leaders, leading to an entertaining duel that was eventually won by the Ruststalker Princeps. 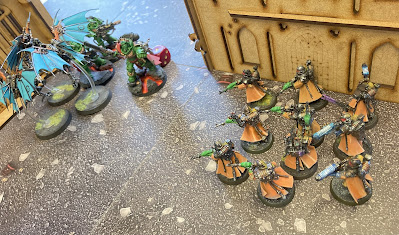 With the Captain wounded the Vanguard formed up into a firing squad to gun him down, leaving the Eradicators the only Salamanders standing. No realistic way back for CJ, so a win for the forces of Ryza. No one levelled up or suffered a battle scar, but as a winning bonus I got a free weapon upgrade - I rolled on the table for Eldane Katronosa's Magnarail Lance, getting an Autoloader - meaning a six to hit would become two hits.
The second game was against Phil and his Night Lords, featuring a squad of melee armed Chaos Marines, a beefed up Lord and a Land Raider! The mission was Survivors of the Fallout - featuring four objectives scored at the end of the battle round and a big central radioactive bubble that meant units within had +1 to be wounded. The Night Lords opted for the Kingslayer agenda, while the AdMech were looking to aquire archeotech from the remains of that Land Raider - obviously being held by the forces of Chaos was a huge insult to it's machine spirit and it would be best to put it out of it's misery. 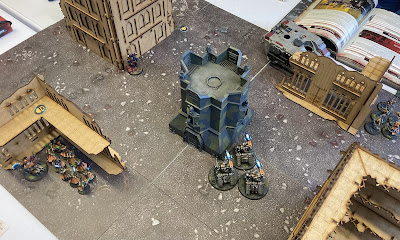 The Ryza forces spread out early to cover as many objectives as possible, not getting any shots in on the hidded traitor Astartes. In response the Land Raider trundled forward to get some shots - blasting two of the Kataphrons in the fallout zone. The Lord also emerged to threaten my left flank, but he failed a middling charge. 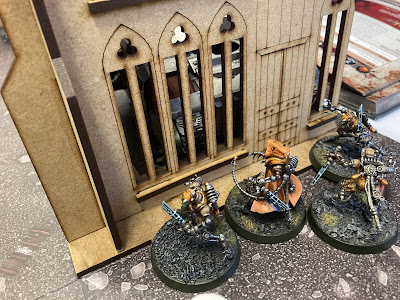 The Land Raider however made it's charge and crushed one of the Ruststalkers through the ruin! They were able to chip a bit of damage off it in return but not much, fishing for mortal wounds. However they still held the objective - the AdMech forces were taking control of the field. 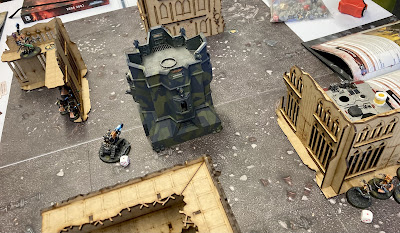 The Chaos Lord found himself a bit out of position after his failed charge and got gunned down in short order. This left his squad to charge through the ruins from a slightly safer position to try and avenge him. 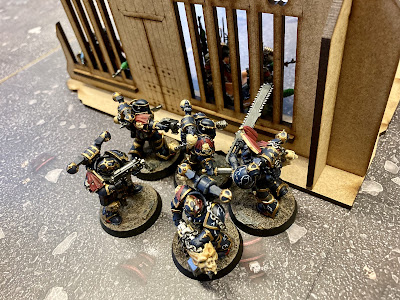 And they made it in! But some really poor rolls let them down - a sea of ones and twos to wound meant only a couple of the Vanguard dropped. 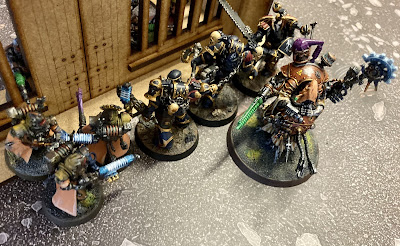 And the counter attack was swift - Katronosa piling in to combine with the Alpha's taser goad to finish the Chaos Marines off. 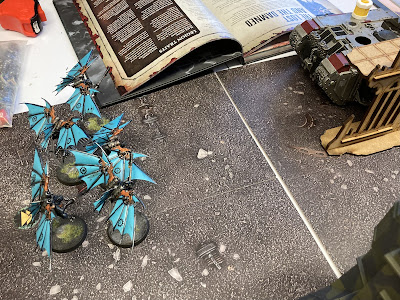 This left just the Land Raider, which killed it's way through the Ruststalkers, the last Kataphron and eventually the Sterylizors who had been sent to claim it's archeotech. On turn five it finally fell to the Vanguard's Arc Rifle, a comprehensive win to the Adeptus Mechanicus but too late to recover the Archeotech.
After that my forces picked up a load of experience points - the Vanguard were the only unit to reach Blooded (earning Killcode Gear Switches for +1 strength) but several others are poised to level up soon. The Sicarians obviously are held to high standards as they suffered a battle scar for being killed by a Land Raider; Mark of Shame. This means they are unable to benefit from Auras until it's removed, but it's unlikely they would anyway so they can just live with the shame for the time being.
Finally, after reaching five requisition points again, I opted to spend three to generate an Archeotech component - in this case an Acidic Conductor - hopefully I'll get the chance to pick up some more to combine with it and have some cool unique wargear!
Hopefully you've enjoyed reading, I certainly enjoyed getting the AdMech out onto the table in a smaller, less competitive and confusing game. The admin phase was pretty light! Thanks for checking it out, stay safe.
Posted by Redtoof at 16:18