Hello!
This one is a bit of a throwback to pre-pandemic days when I used to play with John a lot and we played a couple of four players games in the early days of Grim Dice, before they had a store. I teamed up with Ken running some nice new Harlequins, while John was joined by Jim, both of them with new Tau. Not having any space elves, I took Orks, being fellow children of the Old Ones. With three out of the four of us with new books, being a bit rusty and us all not really having met up since the lockdowns began, it was destined to be a not particularly serious game with plenty of mistakes!
With that in mind we opted to try and keep it simple, with 1000 points a player, acting as two complete 2k lists (with the exception that our alliance didn't break our faction rules) and using the Only War mission from the core rules - basically four objectives, a point for each one held in the command phase, that's pretty much it. 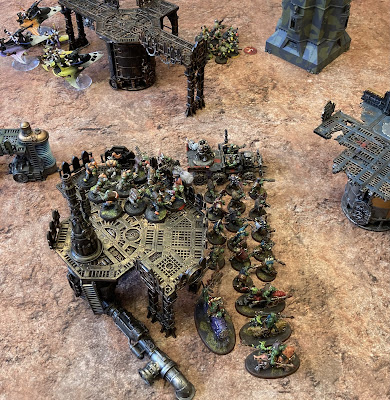 For my detachment I went Beast Snagga themed - 15 of the Boyz, Squighogs, Nob on Smasha Squig and Mozrog Skragbad to lead them. A unit of five Meganobz in a Trukk provided some extra muscle and a couple of ten strong units of Boyz and a Weirdboy rounded out the force with some utility.
The Boyz were joined by Ken's Harlequins - three Troupes in Starweavers, three Skyweaver jetbkes, a Troupemaster, Shadowseer and a couple of Deathjesters - one of which had some crazy exploding sixes rule and a way to get an automatic six to hit. 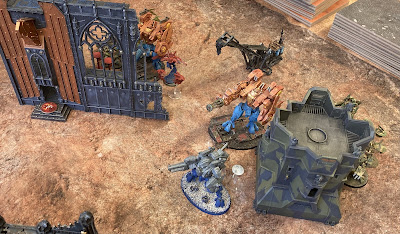 John and Jim both took Farsight Enclaves for ease of use, with John having written both lists weeks in advance (and Jim apparently having read his half the night before!)
John (camouflaged) took Farsight, a scary burst cannon Coldstar commander, some Fire warriors, two missile armed Broadsides and a big mixed loadout Crisis blob that started off the board.
Jim (blue and red) had Shadowsun, some more Fire warriors, a Ghostkeel, a sneaky Gun Drone squad and a pair of Riptides. Plenty of dakka in these lists! 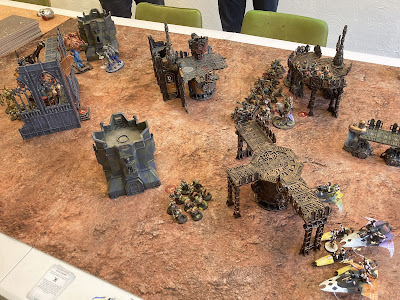 Deployment, trying to take advantage of terrain where possible and with the Boyz mobs on a couple of objectives. I had a strong presence on the right flank while the 'quins were poised to sweep round on the left. Luckily we rolled first turn, giving us a chance to move up before all those guns hit us. 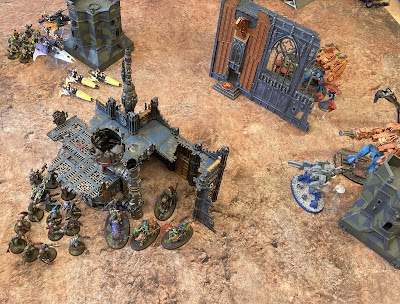 Our turn one movement wasn't too fancy, just shoving everything forward apart from the objective holders and tucking in behind cover where possible. In the psychic phase the jetbikes got protected from being targeted at long range, and the Wierdboy cast Da Jump - rolling a double one... 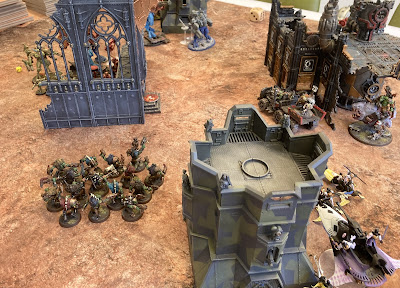 But then succeeding with a reroll. The Beast Snagga Boyz jumped up and over to the Tau lines, within charge range of a couple of juicy infantry squads and behind a wall for overwatch.
Our shooting was fairly minor - putting a bit of damage on the Ghostkeel, but we were hoping for more in melee... 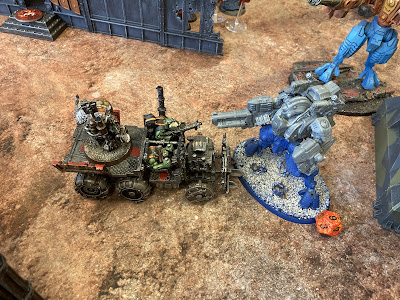 Sadly, for us, the Boyz failed their charge, which could have made things very interesting early on. Instead the Trukk managed to Ramming Speed into the Ghostkeel, giving the Tau something to think about (and causing John to question Jim's placement of the suit!)
In Tau turn one, they... well they did Tau things. Thanks to the Harlequins' various protective rules against ranged firepower, most of the guns got pointed at me. The Trukk, Meganobz, Beastsnagga Boyz and Squighog riders all melted under the barrage. Brutal! However this did leave the 'quins open to cause mayhem. 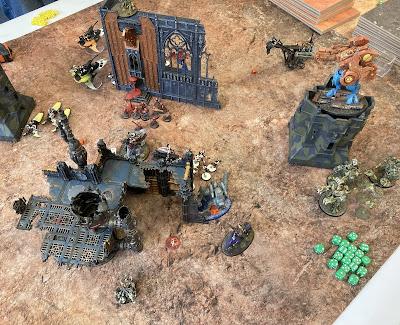 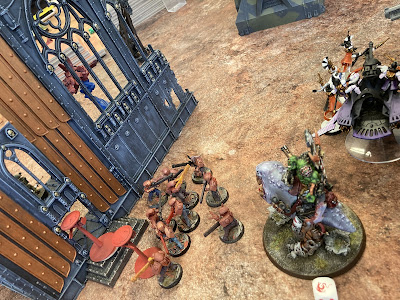 Turn two, we scored a couple of points and then our remaining forces pressed the attack. WAAAGH! Was called, and Mozrog (who had survived being shot by a Riptide) got into position to have a go at Shadowsun, while the Harlequins moved around to get charges all over the place. The Weirdboy had a go at Jabbin Fingerz on the Broadsides, but he double one'd it, even with a CP reroll! 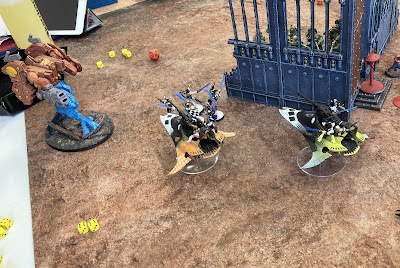 This time the Harlequin shooting was more potent, with the mortal wounds from the Skyweavers combining with shuriken cannons to take out one of the Riptides. A few Tau infantry were killed as well, and one of the Death Jesters nearly killed the burst Commander. 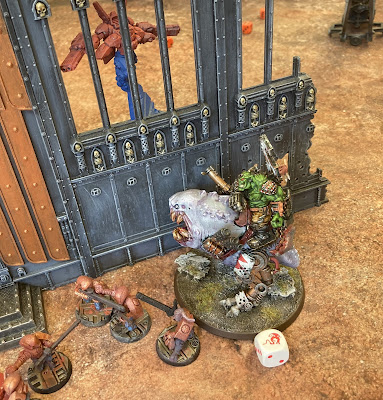 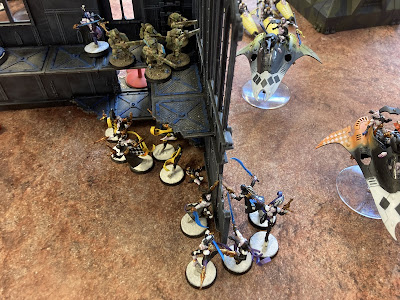 Charges happened. The Troupes made a mess of a Fire Warrior team, while on the other side of the board another unit combined with my characters to take out the Ghostkeel, which forcefully exploded dealing mortals to a range of our units, and disuading my Nob on Smasha Squig from piling into the Broadsides thanks to their improved melee profile!
The duel in the middle ended in disapointment as, thanks to her drones, Shadowsun survived Mozrog and Big Chompa's onslaught with a single wound remaining! 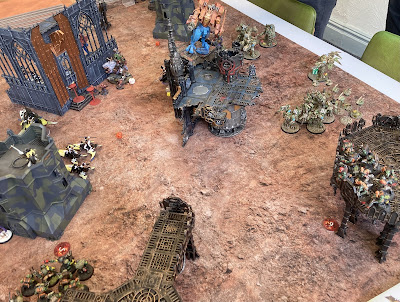 Tau turn two, and the Crisis Suits arrived. They picked up a point for an objective, then had an extensive discussion about where to place their units. John wanted to use the suits to take a more central objective with their move-after-shooting stratagem, while Jim wanted them to go after an objective in our territory currently covered with Ork Boyz. After much debate, John suggested that Jim should "play your own game" while he focused in his unit. As such a Riptide moved over to hold the objective John wanted to control, meaning he might as well go for the Ork held one. A true big-brain 4D chess moment! 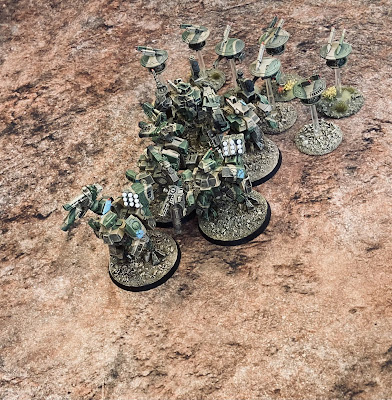 In any case the Tau once again did Tau things, killing almost all the remaining Orks, including dropping Mozrog (though he got back up again with his warlord trait) - leaving just a couple in the unit on the Objective so the Crisis Suits could charge in. Perhaps against the odds, the Nob managed to survive on one wound (even saving on a 6 a late attack from a forgotten drone), then promptly used the auto pass morale strat to hang in their and Obsec the Objective.
In our turn three I had two models left so a pretty easy time of it. Ken's Quins turned their guns on the last Riptide, killing it thanks to nine hits from three shots by the Death Jester. They also removed the last of the Fire Warriors. Mozrog braved the Broadside overwatch, getting away with it to reach melee and kill off their drones. 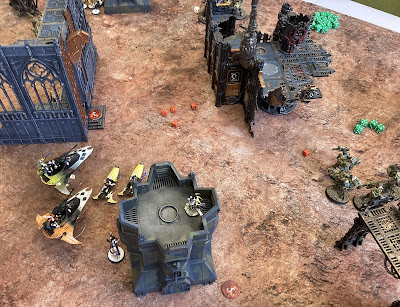 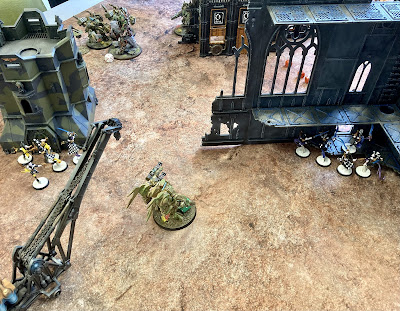 In Tau turn three they were a bit behind on the objectives, but they were about to go about clearing the field. The Broadsides failed to kill Mozrog with close range shooting, and having opted to split fire, wasted their smart missile shots. The burst commander made a mess of a couple of Harlequin troupes, while the Crisis team and newly dropped in Gun Drones blasted that Death Jester and knocked the 'quins off their objectives (while also killing the last Nob with some token fire). 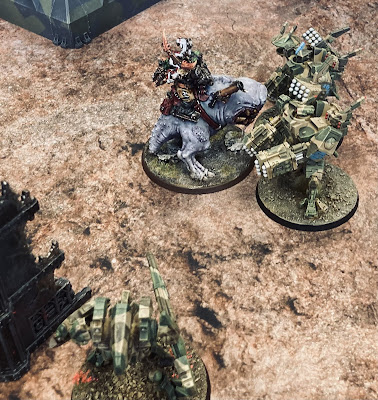 At the end of turn three it came down to Farsight eyeing up a charge on Mozrog - if he didn't get him those Broadsides might have been in trouble! He made the charge and just about took off the Snakebite Warboss' last couple of wounds with his sweep attack!
With that we were just about running out of time (and I had run out of models!). We agreed that while the children of the Old Ones were ahead on points, the Tau controlled two objectives with their two toughest units and we didn't have much left to remove them - plus their shooting would surely kill whatever we plonked on the objectives - it was a narrow Tau victory, probably hinging on if Mozrog had survived and killed the Broadsides.
And that was that. Awesome chaotic fun with much rules confusion and good natured bickering thrown in. Seeing the new Tau and Harlequins in action was... something. I can definitely see why in optimised competitive scenes they are both a nightmare at the moment! Luckily in this kind of game it's all a bit of a laugh so it doesn't really matter that we got half the rules wrong!
Hope you enjoyed this report, it was a fun one to go back over. Thanks for reading, stay safe out there, and remember: Play your own game!
Posted by Redtoof at 20:28