Hello!
Fourth game of the Grim Dice Crusade League for the Helios Explorator Fleet, and this was a quick one! After suffering defeat at the hands of the Crimson Fists, Eldane Katronosa's cohort went scavanging through the ruins on a Tech Hunt (hurr), and were jumped upon suddenly by Matt's Snakebite Orks! 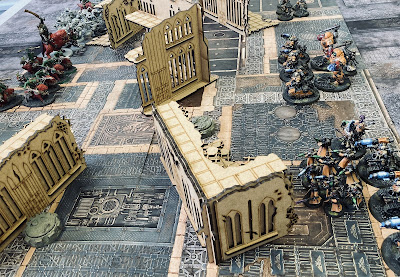 This was a 50 Power Level mission for the Plague Purge pack, where both sides have to search and reveal hidden objectives and control the 'real' ones. Seems like quite a cool mission. As before the AdMech forces from Ryza consisted of Tech-priest Manipulus Katronosa, 10 Skitarii Vanguard, Kataphron Destroyers, Kataphron Breachers, Sicarian Ruststalkers, Pteraxii Sterylizors, 6 Serberys Sulphurhounds, a Cybernetica Datasmith and a pair of Kastelan Robots. 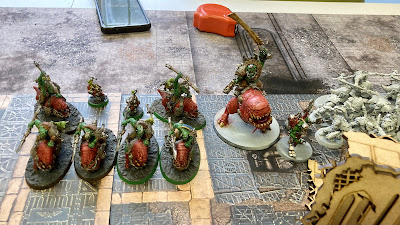 The Beast Snagga heavy Ork force had two big units of Squighog Boyz, a couple of grot mobs, a couple of Beast Snagga Boyz mobs, a Painboss, a Nob on Smasha Squig and a big beefy Squigosaur riding Boss with a load of upgrades. The force had accrued some additional experience to get the Squighogs moving even faster and gave me a few bonus CP to start with. 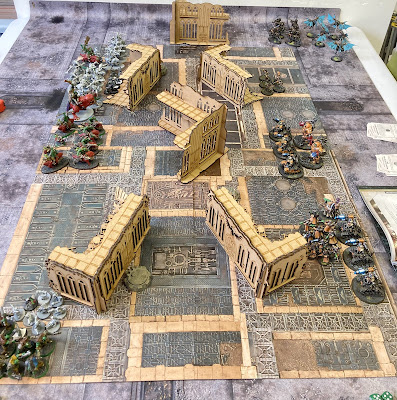 Here's deployment. A big central blob of Orks with some units on the flanks to grab objectives vs a couple of mini castles and the Ruststalkers on the flank. The Sterylizors were in the sky and I spent a command point to put the Sulphurhounds into strategic reserves.
We rolled off for turn one, and I won. I contemplated going first to try and put some hurt on with the Destroyers, but I wouldn't really have been able to do much else (and they have been whiffing a fair bit recently so I wasn't confident in them!) Instead I opted to go second, in the hope that the Orks would move up and fail a few charges to give me the counter attack. In hindsight this was a mistake. 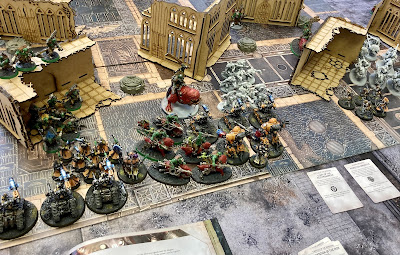 Turn one for the Orks, WAAAGH! Matt's greenskin forces made it rapidly across the board and succeeded on all the charges they needed - a couple of them bang on the 8 or 9 needed on the dice. This was going to hurt! 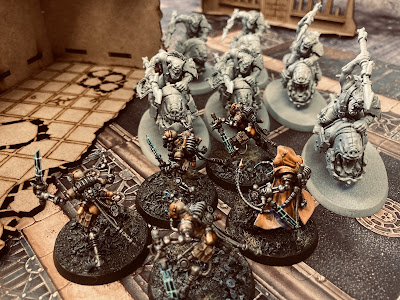 The Ruststalkers were the first to fall, their newly earned improved bionics not able to withstand the avalanche of attacks from six Squighog boyz! 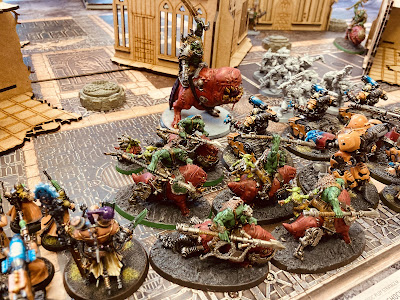 In the middle of my lines I was able to Electro-shock the other Squighogs to hold them off for a moment while the Kastelans smashed them with their fists, killing most of them. The Boss on Squigosaur diced up the Breachers, while a mob of Boyz ran through the Vanguard to tie up the Destroyers and stop them shooting. 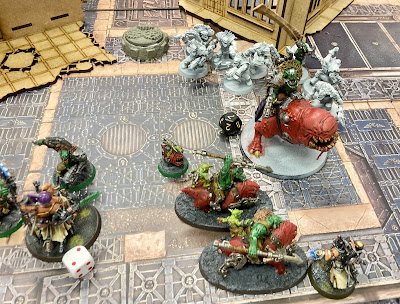 In the return attacks I really needed my Manipulus and the Kastelans to power up and do some damage, but the Warlord wasn't quite able to finish off a Boyz mob, and the robots rolled very poorly to only put a couple of wounds on the big scary boss. He chopped into them to cut them down in response.
In Orks turn two they were holding all the objectives and mopped up the remaining AdMech forces on the board in short order. With victory well out of the picture we went onto my turn two to see if my reserves to grab some experience - I had assassins and Cold Logic - which gave Skitarii units bonus points for doing stuff while the right protocols were in effect - in this turn it was to kill stuff in melee. 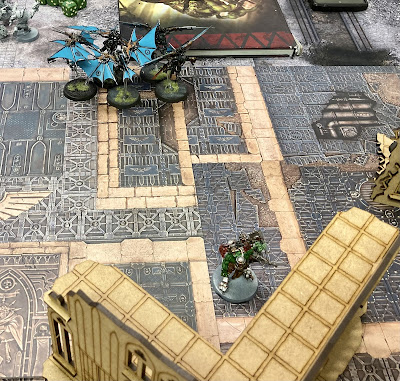 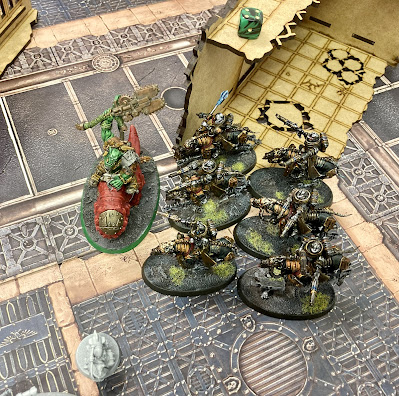 The cavalry arrived, and tried to kill the two weakest characters while also doing some damage with their shooting. However some slightly poor rolling (or very poor for the Pteraxii who managed a sea of ones and twos to wound the Painboss) meant that neither of them accomplished their goal - though the Sulphurhounds did roast a load of Orks. 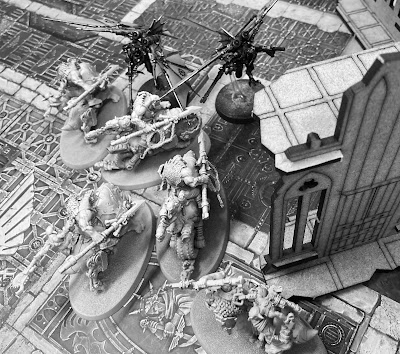 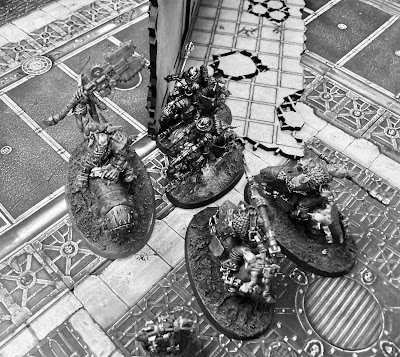 And with that, we went into turn three, and it was all over, the remaining Squighog boyz snuffing out the last of the Ryza resistance. Victory for the Orks!
Well that was Brutal (if not very Kunnin). Really all over with the Orks first charge phase, and definitely over once my Robots couldn't manage to wound the Boss. In hindsight I definitely should have taken first turn and gambled on the Destroyers supercharging with Plasma Specialists to remove a bunch of piggies. Even if they didn't succeed I would at least have got my reserves in before the Orks could do too much damage so they could actually support something. Obviously Eldane Katronosa needs to update their databanks on Ork tactics - they aren't all slow moving infantry and poorly built vehicles!
Hope you enjoyed this quick report - it's unfortunate the game was so one sided but I still enjoyed myself (it is fun to see Orks win after all!) Next time the Mechanicus take to the field the power level will have increased again and I think we'll be taking some more heavy firepower! Thanks for reading, and stay safe out there.
Posted by Redtoof at 19:32