Hello!
Another Crusade game for the Grim Dice league - this time the Adeptus Mechanicus of Ryza took on the Tau from a currently unknown Sept. Regardless of where they come from, those Tau holding tightly onto their strange, valuable xenotech is clearly and affront to the Omnissiah that cannot be allowed to stand. We were escalated to 75 power level now, so I once again had a few new units. The mission, once again from the Plague Purge pack, was Extermination Sweep - a six objective mission with a very complicated set up map but pretty simple objectives - hold the points at the end of the battle round. There's an action to make an objective 'sticky' and fast attack choices became ObSec. 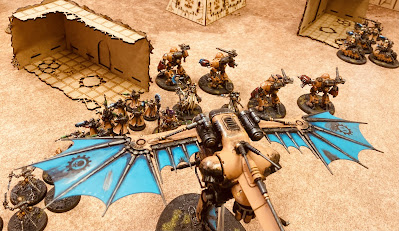 As mentioned, the Helios Explorator fleet brought in some reinforcements. Tech-Priest Eldane Katronosa (now in the new body of a Tech-Priest Dominus) lead a new Manipulus (Gwoll Zygan), a Datasmith (Cykent Bosk), 10 Skitarii Vanguard, 5 Rangers, 3 Kataphron Breachers, 3 Destroyers, 5 Ruststalkers, 5 Sterylizors, 6 Sulphurhounds, two units of 2 Kastelan Robots and some air support with an Archeopter Fusilave.
For the Agendas, we went with Calculated Eradication (kill units on objectives - quickly becoming a go to for me from the Plague Purge options), the classic Reaper, and Break the Seals - search a random objective for archeotech - which turned out to be one that I had a chance of grabbing for once! 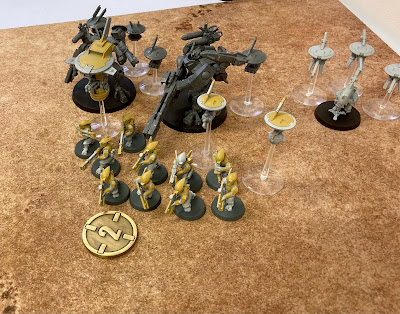 The Tau, piloted by Hikowa Dean (clearly a Tau name), were running a custom Sept. A mega buffed Commander led the force with special characters Shadowsun and Aun'shi but their side. Three Strike teams with a Fireblade and some pathfinders made up the bulk of the force, with Stealth Suits, Sniper drones and a Broadside for fire support and a squad of Crisis Suits kitted out with cyclic ion blasters for the 'hammer'. Lots of dakka! 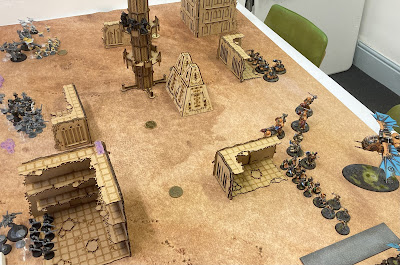 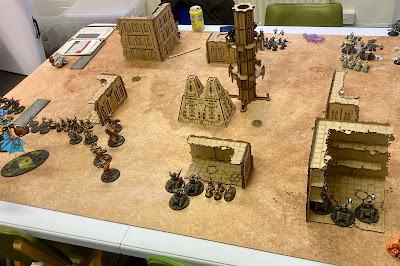 Deployment - most of the units hiding behind buildings and the weird deployment setting the core of our forces quite far apart. The Pteraxii, Sulphurhounds and Crisis Suits were all in reserve, while the Stealths were taking a sniping position in the central tower.
We rolled off, and the choice went to the Tau - opting to take the second turn. A wise move since we scored at the end of the battle round. 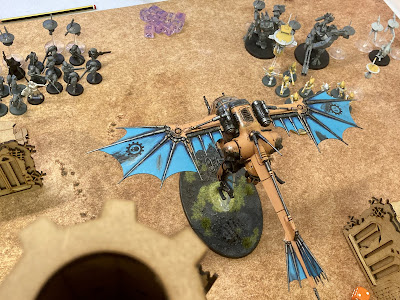 First turn and the Archeopter did a bit of a suicide run to bomb the Stealth team and blast away at the Pathfinders. The rest of the force moved up cautiously and plinked off some wounds on the Stealths.
The return fire from the Tau took out the Archeopter and killed off a couple of the Breachers. The last Stealth Suit jumped onto an objective to put the Tau in the lead. 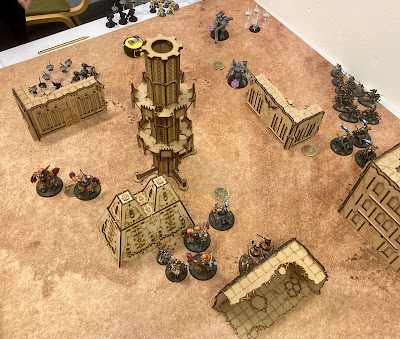 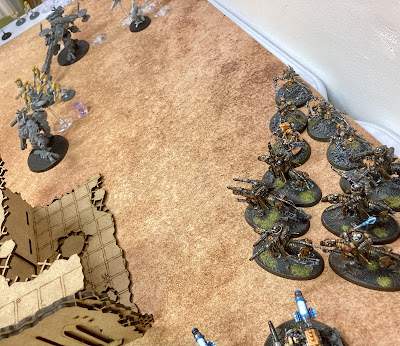 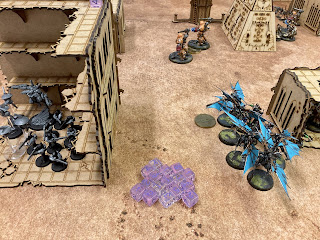 Turn two, and the reserves arrive, including the Ruststalkers who had previously left the board to sneak over to the other side. Operation apply pressure and kill off what we can - while Katronosa made their way to the Archeotech site.
Shooting from the Robots and the Destroyers was ok - killing off the Stealths and Pathfinders and removing a bunch of drones. The Sulphurhounds lit up the Tau commander, removing the drones. Then a disappointing charge phase - thanks to Tau charge reducing tactics all three of the reserve units failed to reach melee. A mixed turn for sure. 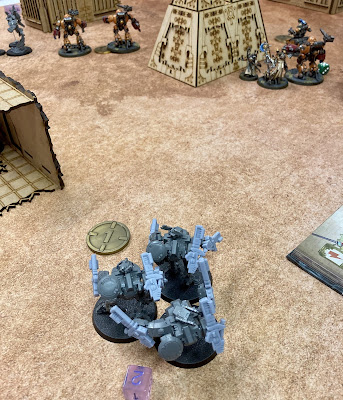 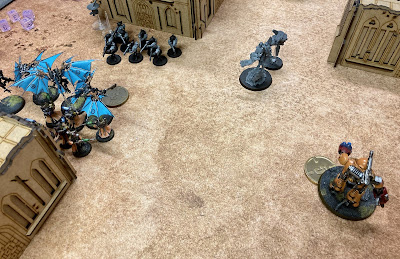 Turn two and the Tau suits came out to play. Shadowsun and the Crisis Suits both removed a Kastelan robot, while massed shots from firewarriors killed off the Ruststalkers and the Commander made short work of the Destroyers. My right flank just about hung in there as the Broadside whiffed against the Suphurhounds, rolling double ones to wound with the railgun. I think at this stage we were equal on objectives so the Tau maintained the lead. 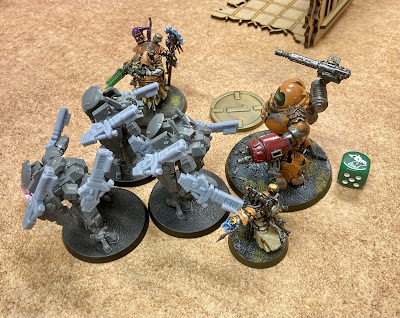 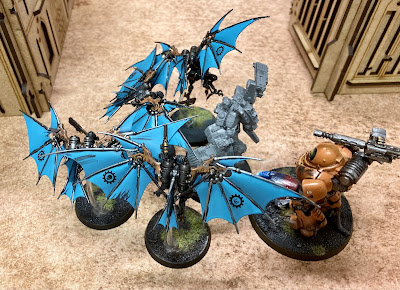 Turn three saw the remaining robots make it into melee, punching out Shadowsun and most of the Crisis suits. Shooting from the Rangers with their Transuranic Arquebus combined with the Sulphurhounds to kill off the Broadside, and the Vanguard unit took out most of a Strike team. It went pretty well... 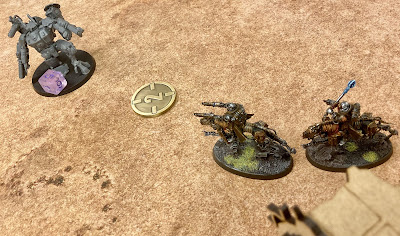 Apart from the charge of the light brigade here, when the Sulphurhounds charged the Commander, getting overwatched to death immediately, thanks to exploding sixes from multiple sources.
Once again, a mixed turn, with some good damage dealt but forces were dwindling. Though outside of the fighting, Katronosa succeeded in digging up an Archeotech weapon part - Digital Cannon acquired! 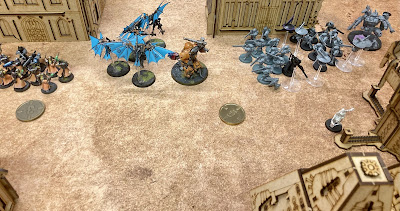 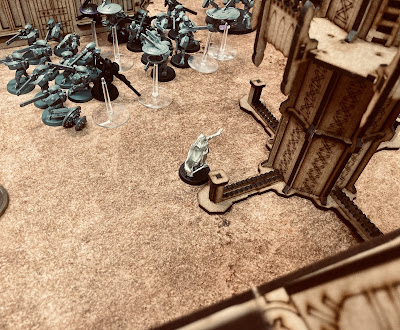 Going into Tau turn three and it was getting fairly interesting, with Aun'shi doing his agenda to hold a secret meeting in the middle of the board, and the rest of the remaining Tau forming a big firing line. The Pteraxii and Kastelan got taken out by a blistering fusilade of fire, but the Vanguard were still in play. This once again tipped the objective game in the favour of the Tau - at this point pretty much an unassailable lead. 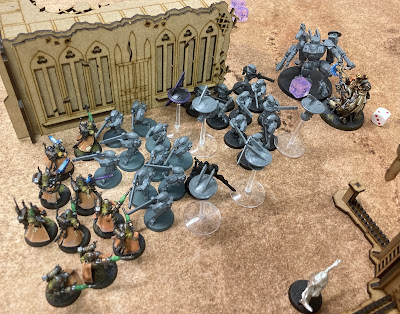 I got a turn four to try and make a dent in the remaining Tau forces, but some excellent work from a shield drone negated most of the firepower and melee was a little disappointing thanks to the active Doctrina Imperative. Katronosa got into melee with the Commander but they both bounced off each other's armour.
With that we ran out of time - a clear victory for the Tau but an early finish probably saved a few units from potential battle scars.
This was a fairly even game in terms of damage output but I probably needed some charges on turn two to go off. Going second was definitely the right choice for the Tau, and probably made the difference. Overall though, while the Tau were clearly up to some shady business with the local populace, the forces of Ryza picked up some valued Archeotech so quite frankly the Tau can have the rest of this ruined city.
In addition to the archeotech, we also got a battle honour for the first of the Kastelan units - Elite 'Crew', meaning they would get to reroll ones to hit - very valuable for their fists in the Conqueror protocols with they hit on 2s. The next game is scheduled to be against Nick and his Custodes, so we get to be naughty AdMech going against some other Imperials again.
Thanks for reading, hope you enjoyed it, and stay safe!
Posted by Redtoof at 17:06