Hello!
As you may have seen recently, I've been enjoying getting the Tyranids back onto the table (they're a bit good!) - but so far it's been matched play, and as cool as that is, the Crusade section of the book has got me quite excited. So I was pretty happy to have the opportunity for a Crusade game against Sharpy and his Aeldari. (I also borrowed some of his pics for this report!)
Now firstly, before a Tyranid Crusade force takes to the field, you need to generate a planet to eat. I rolled up a Hive World, and the various amounts of Biomass and Crushed Resistance I'd need to acquire in order to gobble it up. The process is split into three sections, Invasion, Predation and Consumption, each of which with a bonus stratagem and some changes to the 'thanks for playing' experience points to encourage certain units. For instance in the Invasion stage I got additional XP for Genestealers, Endless Multitude units (in this case Gargoyles) and the Hive Crone, while if I'd taken any Hive Tyrants or Tyrannofexes, for example, they'd not get the free XP at all! I think the intent is that as you go though your Crusade you cycle out units that haven't gained much XP or picked up battle scars for new ones that benefit from the next stage. I'm sure I'll get the chance to go through it in a lot of detail on an episode of the Narrative Wargamer Podcast, but for now what you need to know is that I've taken a very fluffy early stage invasion Tyranid list, that is also appropriately rewarded in the Crusade system. 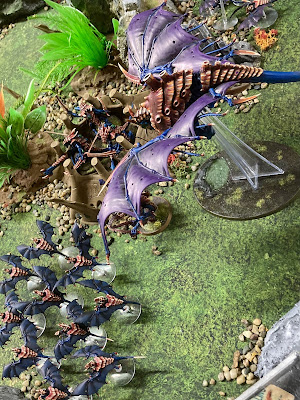 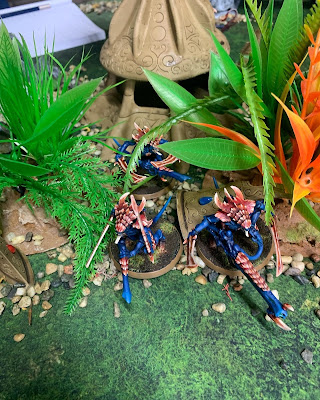 So my initial 50 power level Crusade consisted of a unit of Warriors, a full unit of ten Genestealers, three broods of Gargoyles, a trio of Raveners, a big old Hive Crone with the Dermic Symbiosis upgrade, and led by a Broodlord with the Ymgarl Factor and a Tyranid Prime with Direct Guidance. Hive Fleet Goliath is a Behemoth splinter fleet, so I used their rules. 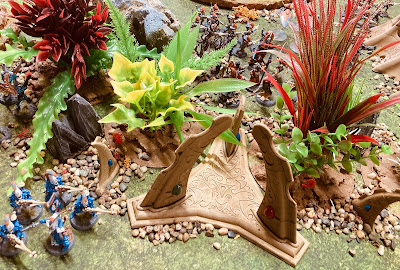 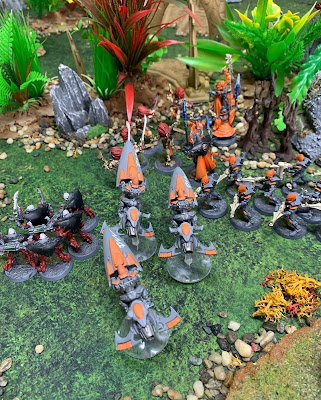 Sharpy's Eldar leaned heavily into Aspect Warriors, with units of Dire Avengers, Swooping Hawks, Warp Spiders, Fire Dragons and Howling Banshees. Two units of Guardians and some Windriders filled out the core of the force, led by a Farseer with a couple of Warlocks and a kitted out Autarch as the warlord. They are a custom Craftworld using the traits for sixes to hit are auto wounds on shuriken, and a 6+ invulnerable on everyone, plus some mortal wound protection. I'm not entirely sure how their Crusade rules work, but apparently the Dire Avengers were on the Path of the Warrior, so would get points for killing stuff or something. He was also looking to upgrade some Guardians to Wraith units at some point if they took enough punishment.
For the mission, we played The Relic from the main rulebook. Nice and simple, one central objective to pick up and walk off with - if you can. For my agendas I picked Infest the Prey World, which gives Biomass and Crushed Resistance points for having Endless Multitude units in quarters of the board, and then XP for having units in the opponent's deployment zone at the end. I paired it with Breakthrough - more XP for being in the opponent's zone. The Aeldari went for a codex agenda to pick up the spirit stones of fallen units, and the classic Reaper for some nearly guaranteed, zero thought XP. 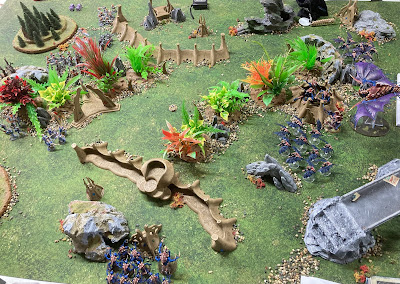 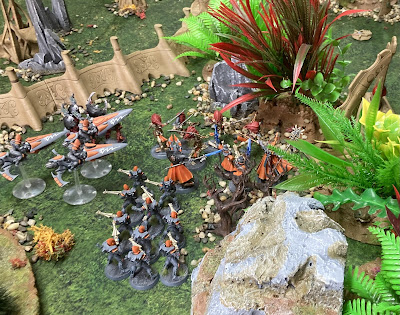 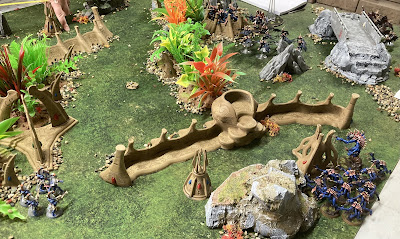 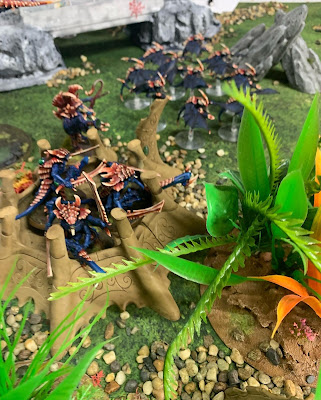 Deployment - the Fire Dragons went into the Webway, while the Raveners were digging underground. We'd both deployed taking advantage of the forests, while I forward deployed the Genestealers and Broodlord onto the 'safest' flank to do some sneaky stuff. I won the roll for first turn, and opted to give it to the Eldar, since I didn't fancy a turn of just shooting through the woods.
The Craftworlders took advantage with their movement to pop the Dire Avengers on the Relic, while they combined with the Swooping Hawks to cut through most of the Genestealers, leaving only two remaining. On the other flank the bikers cut down a few Gargoyles. 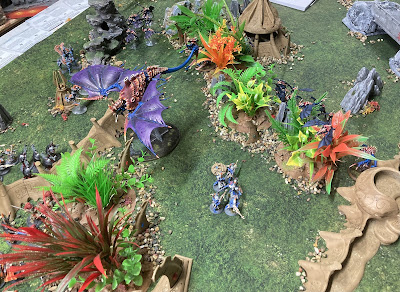 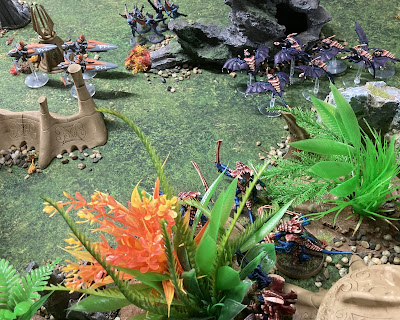 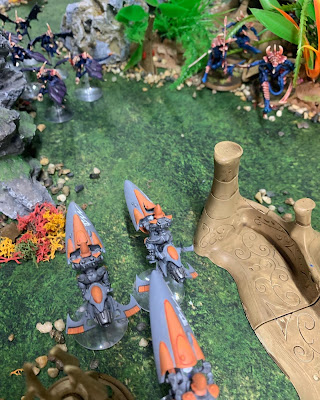 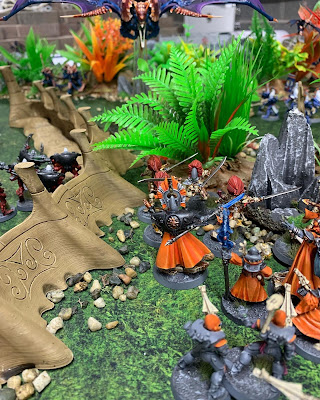 Tyranid turn one and it was time for a bit of a counter attack. The Crone flew into the centre to dish out some damage - killing off three Banshees and a couple of Avengers and Jetbikes. Gargoyles moved up into the woods with the Broodlord to pepper the remaining Avengers, while the Warriors finished the job. Another Gargoyle unit moved up to harass the Swooping Hawks - swarming them in melee for minimal damage. The third unit flew up to Encircle the Prey, while the last couple of Genestealers made a break for the Eldar deployment zone, putting as much ground and terrain between them and the space elf guns - obviously off to go find some undefended genes!
It was a reasonable counter attack, clearing the objective, but neither of us had lost that much yet. 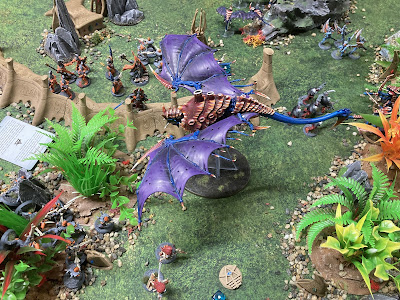 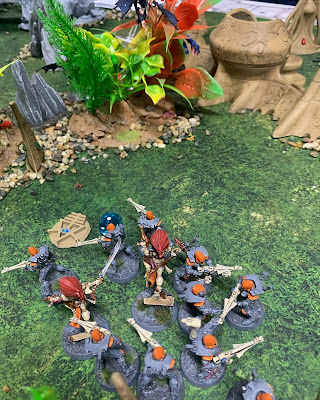 Turn two, and the Eldar counter-counter attacked! The Fire Dragons stepped out of the webway to melt the Hive Crone out of the sky. The Hawks jumped out of combat to allow the Warp Spiders to make an absolute mess out of those Gargoyles. One of the Guardian units, supported by the last couple of Banshees, stepped out of cover onto the objective to blaze away at the unit of Gargoyles with the Broodlord, but thanks to Catalyst they just about hung on.
With my biggest model down, it looked like the Aeldari were back on top, but then it came time for the jaws of the trap to close... 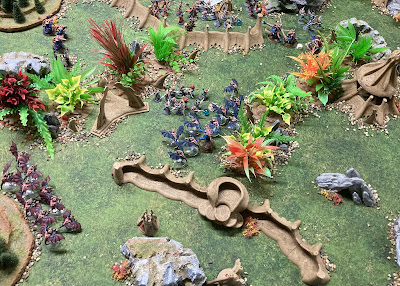 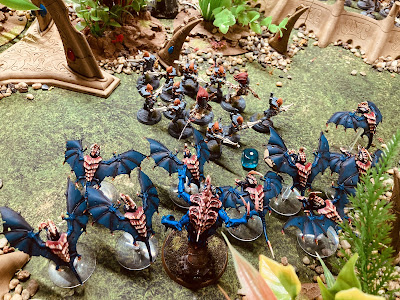 The third Gargoyle unit dropped in behind the Guardians, while the Raveners dug up to flank the Fire Dragons. The Warriors moved up to get some melee going. Thanks to being an Endless Swarm, the damaged Gargoyle brood went back up almost to full. Shots fired all over, killing a bunch of Guardians but not totally removing them, and the Warriors killed a couple of Warp Spiders. I also shot a cheeky shot from the Prime into the Fire Dragons to activate Shard Lure and give the Raveners an easier charge - which they made. 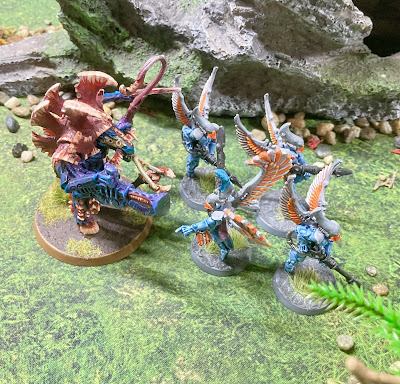 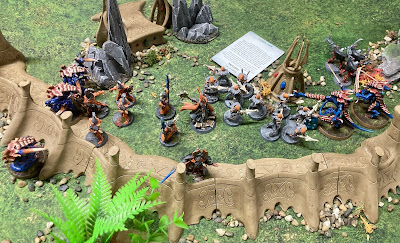 In melee most of my units got stuck in. The Raveners killed all but the Exarch of the Dragons, while the Warriors went into Guardians to make a mess of them, tagging the Spiders as well. The Gargoyles and Broodlord swarmed the centre, killing off the last of the Banshees and leaving a single Guardian to flee the scene. Finally the Prime made a charge on the Swooping Hawks, cutting down enough of them for their leader to fail morale and flee the scene.
A brutal turn for the Nids, leaving only Eldar characters and a few remnants of units. But of course Eldar psychic powers are a thing and those Spiders were still active... 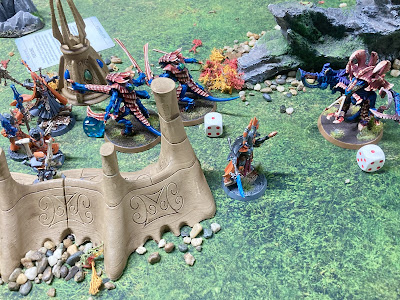 Into Eldar turn three and a valiant effort saw the three remaining Warp Spiders shred the blue winged Gargoyles, while the Autarch shot and then charged the Prime to kill it. The Seers though whiffed somewhat against the Warriors, killing one and then eventually another, while getting cut down by the boneswords over the next few phases.
Tyranid turn three was spent turning the screws and finishing off some odd one man units, but the Warp Spiders jumped out of a charge from the Broodlord to keep the fight just about alive. 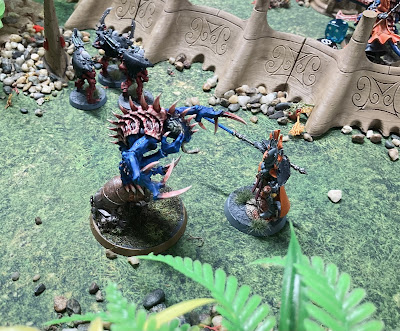 Turn four saw the Spiders make a dent in the Raveners, the Farseer having a smite denied to kill the last warrior (and then falling to it) and the Autarch bravely going toe to toe with the Broodlord. The big genestealer dodged the fusion blast and survived the melee, to strike back and bring down the enemy warlord. 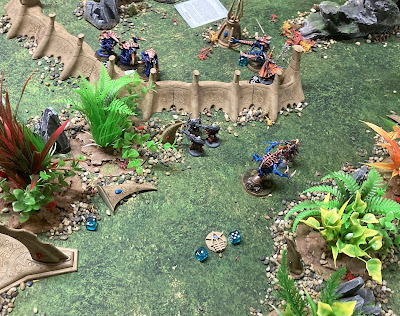 With that, the last couple of turns were just clear up for the Nids, removing the last Aeldari, the Broodlord grabbing the relic and then the Genestealers, Raveners and remaining, red-winged Gargoyles hanging in the Eldar deployment zone for experience.
In the end a comfortable victory for the Tyranids, but it certainly didn't look that one sided in turn one and two!
Another great game, Sharpy always sets out an excellent table so it looked great, and was fun for us to both make our first steps on the Crusade with our new books. After that the Broodlord claimed the relic, earning a free Crusade Relic - I chose the Spirit-Leech Cortex, which gives him the ability to regain wounds and increase his strength for dishing out mortal wounds in the psychic phase - feels appropriate for some kind of aeldari soul-gem relic!
With those pesky Aeldari sent packing back to the Webway, the Nids picked up two each of the Biomass and Crushed Resistance points, which is half way to completing the Invasion stage. I also got enough XP for upgrades on the red-winged Gargoyles and the Genestealers thanks to the stacking agendas and their XP for taking part bonus. They got Fleet of Claw (advance and charge dice are minimum 3) and Ranged Resistance (+1 save vs shooting) respectively. For the Aeldari, the Warp Spiders really outdid themselves, going up to Blooded rank and becoming Headhunters (+1 to hit and wound vs characters).
Anyway, that was fun! There will be more Crusade content coming soon as the AdMech will be back in action again, but until then, thanks for reading and stay safe out there!
Posted by Redtoof at 17:51